Breaking
NBA-Backed Saliva Coronavirus Test Gets Emergency FDA Authorization
The Amazing High-Yield REIT Strategy For 7.9% Dividends,...
How To Attract Candidates To Hard-To-Fill Positions
Trump: I’m ‘Ready’ To Take Action On Stimulus...
Apple iOS 13.6.1 Release: Should You Upgrade?
Non-PPP Loan Approvals Continue Slow But Steady Rebound
Here’s How To Stay One Step Ahead Of...
Microsoft Outlook Will Store Contacts’ Blood Group And...
How The US Department Of Health & Human...
Why Do Chinese Companies List Their Shares In...
Can You Get Covid-19 Coronavirus From Food? Frozen...
Winklevoss Twins Tell Bar Stool’s Dave Portnoy To...
How Democrats And Republicans Would Tackle The Enduring...
Berkshire Hathaway Doubles Down On Net Lease REIT,...
70% Of Americans: Ban Foreign Apps
This Week In Credit Card News: Pandemic Brings...
Home Business Box Office: ‘Onward’ Stumbles With Mediocre $12.1M Friday
Business 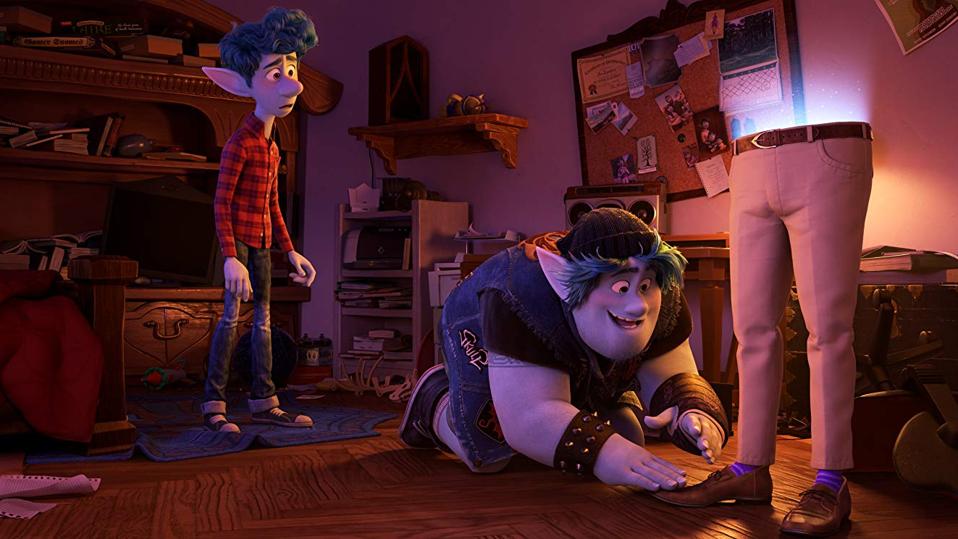 Considering how much grief Universal and Illumination took (from myself among others) when The Secret Life of Pets 2 “only” opened with $47 million last summer, it’s not great at all for a new Pixar movie to be opening with just $40 million in its domestic debut. That’s the likely scenario with an $12.1 million Friday, including $2 million in Thursday previews. That’s just barely above the $39 million Fri-Sun launch of The Good Dinosaur ($42 million adjusted for inflation), during a $55 million Wed-Sun Thanksgiving launch in 2015.

Pets 2 earned $2.3 million from is Thursday preview, so (thus far) Onward is displaying the same kind of “Thursday-to-weekend” legs. The Illumination sequel was technically a hit, with $430 million worldwide (including $168 million domestic) on an $80 million budget. Pixar hasn’t made a movie under $150 million since Cars ($120 million) in 2006.  I don’t know the exact budget for the (gorgeously animated) comic adventure, but I’m guessing it wasn’t cheap.

While there is a case to be made that I’d be singing a slightly more upbeat tune if this were a $150 million DreamWorks toon, since those are almost always super leggy come rain or shine. Nonetheless, even a 3.5x multiplier would give this one just $140 million, and I wouldn’t be too thrilled if a $150 million-plus DWA flick opened with around $40 million either.

Is it possible that the Dan Scanlan-directed film will leg out over the next six weeks? Absolutely. Zootopia, an extreme example mind you, opened with $75 million and legged out to $340 million even alongside the likes of Batman v Superman and The Jungle Book. But it’ll need legs worthy of DreamWorks’ How To Train Your Dragon ($220 million from a $43.5 million launch in 2010) to even get to $200 million domestic.

While Onward is a good movie with a very strong third act, I don’t quite see it capturing the zeitgeist like the first DWA HTTYD epic ten years ago. For one thing, it opened AFTER the Disney mega-bucks live-action fantasy (Alice in Wonderland), not weeks before (Mulan). Nonetheless, the next big(ish) kid-targeted flicks of this nature is Peter Rabbit 2 on April 3 and Trolls: World Tour on April 10.

Onward was tracking for an over/under $45 million launch, so this likely over/under $40 million debut isn’t terribly off the mark. The movie looked “fine, I guess” for general audiences. We’re at a point where even a new Pixar movie isn’t automatically a theater-worthy event unto itself. Even solid reviews (an 86% fresh and 7.5/10 from Rotten Tomatoes) and decent word-of-mouth (Disney knew they were in a pickle, hence last Saturday’s sneak preview) couldn’t move the needle.

2020 was always going to be a challenging year for Disney. They have lesser MCU movies (Black Widow and Eternals), three animated originals (Onward, Soul and Raya and the Last Dragon) and “live-action fantasy remake” titles (like Mulan) noticeably less nostalgia-worthy than the likes of Aladdin and The Lion King. It’s a damn good thing that Mulan is tracking for an $80-$90 million launch.

It’s not that Disney is on the precipice of doom or any such nonsense. They have, over the last few years, built up an image as the undisputed king of the hill. They are huge partially because we all claim that they are huge. As the sacred educational scrolls known as 300 and Iron Man 2 taught us, you don’t necessarily have to kill a god, as making him bleed is enough to shatter the illusion of divinity.

This is just one underperforming movie, but (especially after Call of the Wild) that just means more is riding on Mulan and the rest of the non-MCU slate. Once again, we’re dealing with a movie that was tracking at $45 million that will instead open with around $40 million. I highlight that to emphasize that,  barring new variables, this isn’t a situation where Coronavirus fears kept audiences away from theaters.

Audiences showed up after 9/11 for the likes of Hardball, Don’t Say a Word and Zoolander. They showed up for The Dark Knight Rises after the Aurora shooting. They showed up for Joker despite the entire media trying to build a pre-release narrative that the drama would inflame political passions and inspire either copycat crimes or an outright incel rebellion. If audiences want to see a movie, they are damn well seeing that movie.