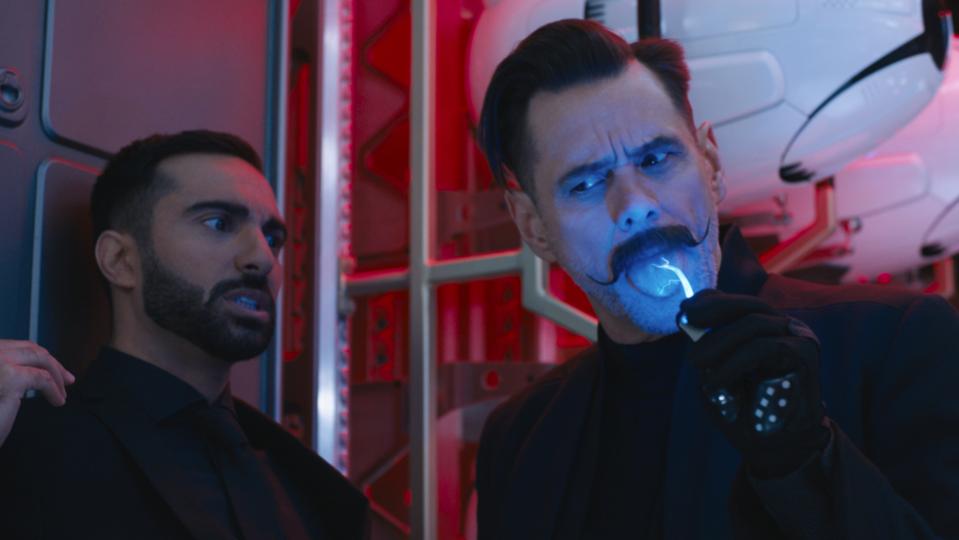 Lee Majdoub and Jim Carrey in SONIC THE HEDGEHOG

Paramount Pictures and Sega of America.

Sonic the Hedgehog began what Paramount and SEGA hope will be an appropriately massive box office sprint this weekend with a decent $3 million in Thursday previews. Yes, because it’s a kid flick (and not a sequel), it’s less likely to be fan-driven or Thursday-to-weekend frontloaded compared to a superhero flick.

That $3 million sum is identical to Universal’s How to Train Your Dragon: The Hidden World which went on to earn $55 million over its domestic debut. The President’s Day holiday somewhat messes with the math, but Paramount would be thrilled with a $55 million Fri-Mon weekend, let alone a $55 million Fri-Sun launch. Of note, The LEGO Batman Movie earned $2.2 million three years ago (on the weekend before President’s Day weekend) for a $53 million launch, ditto LEGO Movie 2 earning $34 million from a $1.5 million Thursday gross last year, but I’m not necessarily expecting a $68- $72 million weekend launch.

Pre-release tracking has suggested an over/under $45 million Fri-Mon launch, but we’ll see if the surprisingly positive reviews (it’s a perfectly enjoyable kid-friendly fantasy with strong performances from James Marsden and Jim Carrey) have an effect on the opening weekend. Solid reviews did wonders for Bad Boys for Life but didn’t move the needle for Birds of Prey. Also helping is its presence as the first big kid flick since Star Wars IX. 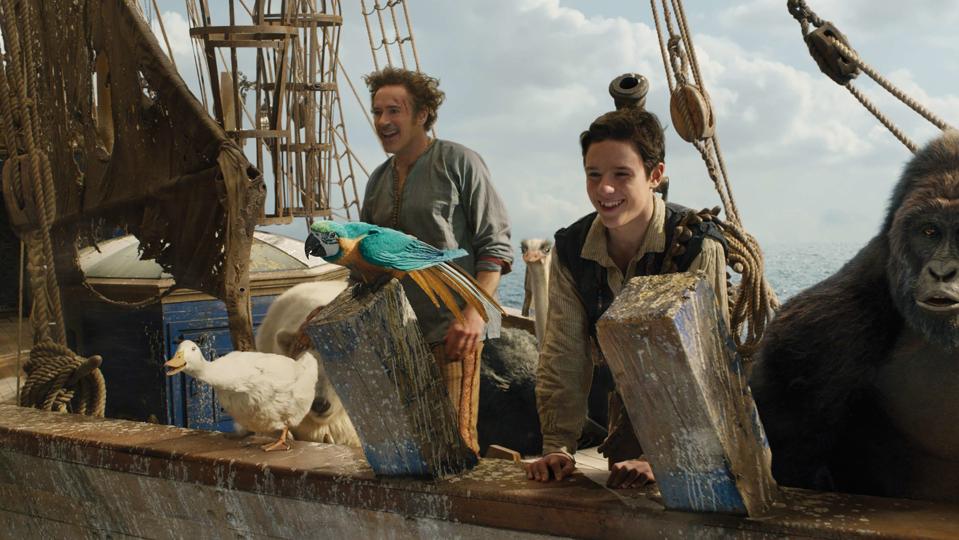 All due respect to Cats, Dolittle and Spies in Disguise (which deserved better than an under-$200 million global cume), Sonic the Hedgehog may break bigger than hoped due to its existence as a kid-appropriate PG-rated movie amid a flurry of R-rated flicks and PG-13 horror movies. Sonic stands out alongside The Grudge, 1917, Bad Boys for Life, The Rhythm Section and Birds of Prey, as well as The Invisible Man at the end of the month.

If you recall, The LEGO Movie opened with a massive $69 million debut weekend in February of 2014 partially because it was the first big kid flick since Frozen in November of 2013. The Walt Disney toon legged out to $400 million domestic from a $93 million Wed-Sun (wide release) debut partially because much of its competition was adult-skewing (Lone Survivor), hyperviolent (Hunger Games: Catching Fire, The Hobbit: The Desolation of Smaug) or PG-rated movies aimed at adults (Saving Mr. Banks, The Secret Life of Walter Mitty).

It’s not quite the same thing this year, but the deluge of early-2020 R-rated biggies partially explains the strong legs for Jumanji: The Next Level. Despite brutal competition from Star Wars: The Rise of Skywalker ($511 million-and-counting) and Frozen II ($472 million-and-counting), Sony’s well-liked and well-received action-comedy sequel has crossed $300 million in domestic earnings. That’s 5x its $59 million opening weekend, which is a great multiplier even for a big movie in December. 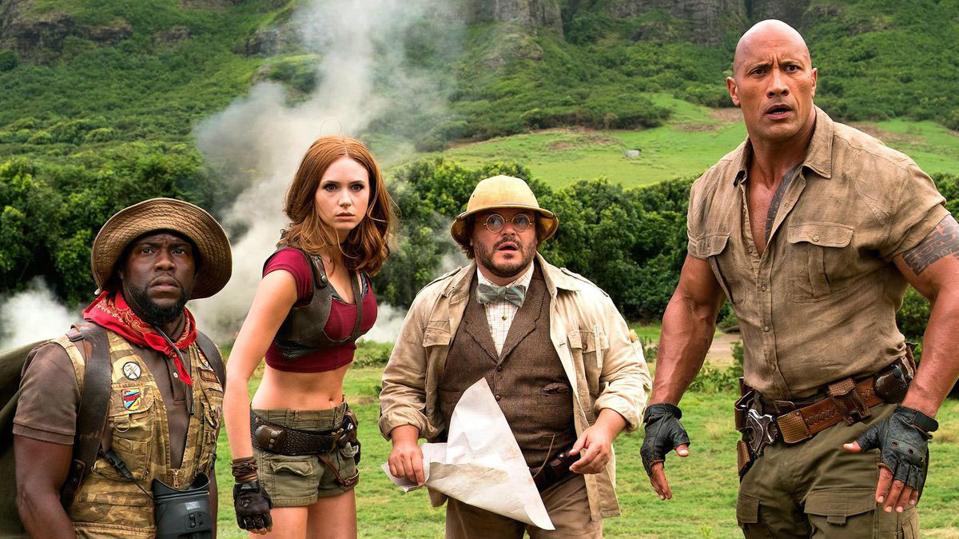 Aquaman was the big fantasy smash in late 2018 with $335 million. The Hobbit trilogy earned (sans inflation) $303 million in 2012, $258 million in 2013 and $255 million in 2014 as the official “big year-end fantasy spectacular” films. But Jumanji: The Next Level still managed to essentially match those films with far less buzz and coverage and despite two mega-movies aiming at similar demographics.

Yes, it’ll earn noticeably less than the $404 million domestic gross of Jumanji: Welcome to the Jungle. But A) that was to be expected and B) it’s still going to outgross the unadjusted $304 million domestic total of Sony’s Skyfall (from an $88 million debut), which was a franchise-best for 007 in late 2012/early 2013. Oh, and with over $770 million worldwide, the $120 million sequel has passed the global cume of Fast & Furious Presents: Hobbs & Shaw. That makes Jumanji 3 last year’s biggest global grosser that wasn’t a Disney release and/or a comic book movie.

Wow, I bet the star of Hobbs & Shaw is pissed about that. Jokes aside, this bodes well for Dwayne Johnson and Emily Blunt’s Jungle Cruise this July. The Disney film looks like a fun knockoff of Stephen Sommers’ first Mummy (that’s a compliment) and Johnson has pull when he’s in the comparative safety of a viable franchise. The Jaume Collet-Serra-directed adventure may be Disney’s first “new” live-action franchise (outside of Marvel and those live-action remakes) since National Treasure in 2004. 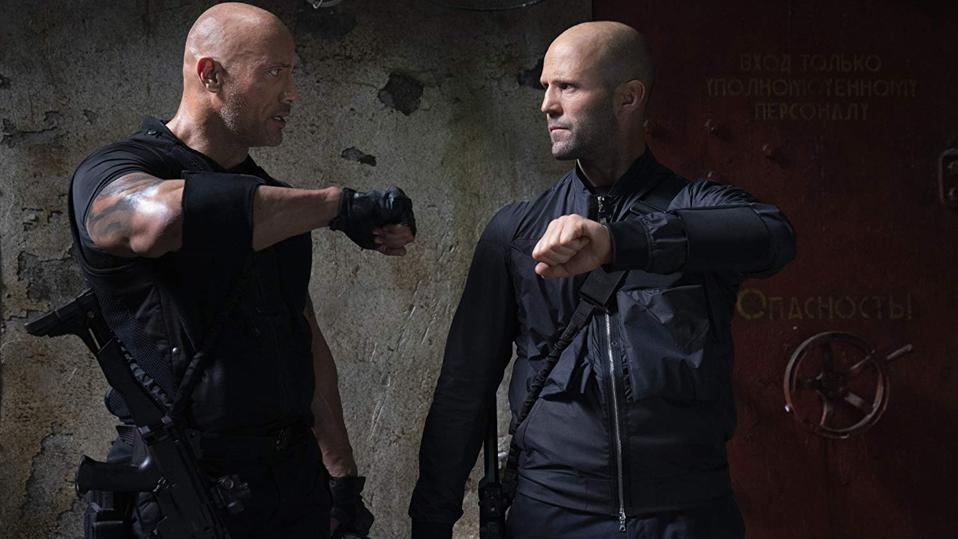 While Hobbs & Shaw earned $200 million in China last year (last year’s only non-Marvel Hollywood film to earn over $136 million in China), Jumanji 3 is flirting with $800 million worldwide with just $41 million in China. That’s worth noting in case China remains closed for business for much of the year.

Both Welcome to the Jungle and Sonic the Hedgehog are, quality differences aside, over/under $95 million action fantasies aimed at kids which don’t entirely depend on the IP to provide pre-release interest and onscreen entertainment value. Jumanji 2 worked because of its killer cast (Johnson, Kevin Hart, Karen Gillan and Jack Black), its inverse plot (this time, the kids are sucked into the game) and the clever use of video game tropes to provide plot and jokes.

Sonic’s aims are more modest, but the film still works because Sonic is a sympathetic character and both Marsden and Carrey bring their A-game. Both films excelled by not trying to be bigger than they were. And, yes, if Sonic breaks out, it’ll be because Sonic is a viable “people want to see him in a movie” IP, the film is actually pretty good and it’s the first “big” kid-targeted flick since Jumanji: The Next Level, especially considering that The Rise of Skywalker was arguably aimed more at nostalgic adults than young fans.

The lack of kid-friendly 2020 releases kept the Jumanji, Star Wars and Frozen sequels in the game while giving Sonic a leg up on opening weekend.

The Transformation Of Consumer Behaviors In The Digital...

From Process Automation To Autonomous Process

Perceptions Give Way To Reality: ExxonMobil Found Not...