Breaking
U.S. House Passes Bill To Create First Crypto...
Top 3 Lessons For Financial Independence
The Ultimate Guide to Saving Money
Lights, Camera, Action—Is There A Post-Covid Future For...
7 Ways to Reduce Human Errors in Your...
How ‘Couples Therapy’ Used Technology To Cope With...
Can You Settle Your Student Loans Or Negotiate...
7 Best Practice PR Tips For Your Next...
How to Use Amazon Attribution For Ad Campaigns
What are the Makings of a High-Quality Link?
How To Quickly Start And Scale Your Business
Terra Virtua: What NFTs Can Teach Us About...
5 Easy Steps To Prepare Content For E-A-T...
Physical Inactivity Linked To More Severe Covid-19 Infection...
The 2021 Estimated Tax Dilemma: What Tax-Return Pros...
Want To Digitally Transform Your Business? Start With...
Home Business Box Office: ‘Sonic’ Races Into The Record Books With $68M Debut
Business 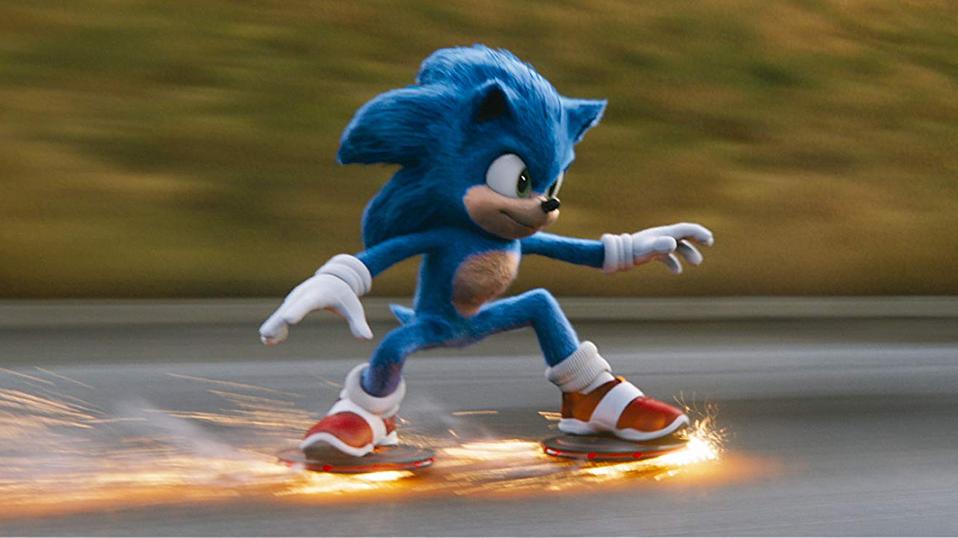 Ben Schwartz in ‘Sonic the Hedgehog’

Sonic the Hedgehog earned $57 million over its Fri-Sun opening weekend, besting the $54 million launch of Detective Pikachu to snag the biggest debut ever for a video game-based movie.

Sega’s Sonic the Hedgehog, starring Ben Schwartz, James Marsden, Jim Carrey and Tika Sumpter, raced to the top of the box office this President’s Day weekend, earning a whopping $57.9 million over its Fri-Sun debut for a likely $70.3 million Fri-Mon holiday launch. That’s the biggest launch ever for a video game-based movie, just ahead (sans inflation) of the $54.3 million Fri-Mon debut of Pokémon: Detective Pikachu in May of 2019. To be fair, Warner Bros.’ Ryan Reynolds/Justice Smith flick opened during Avengers: Endgame’s third weekend. Last year’s controversies turned out to be a blessing in disguise for this $85 million Paramount release, making it into an even bigger event by virtue of its mostly R-rated (Bad Boys 3, 1917, Birds of Prey) competition.

Had the Internet not gone crazy over the first Sonic trailer’s strange-looking Sonic designs, and had Paramount not reacted by delaying the film three months (from mid-November of 2019) in order to fix them, Sonic the Hedgehog would have just been another would-be biggie alongside Terminator: Dark Fate, Charlie’s Angels and Frozen II, with a month between it and Jumanji: The Next Level. But this weekend, Sonic the Hedgehog opened to halfway decent reviews, plenty of free online media and a place as the first “just for kids” biggie (all due respect to Cats, Dolittle and Spies in Disguise) since Jumanji 3 and Star Wars IX two months ago. The second release date turned out to be the perfect release date for Sonic the Hedgehog.

The LEGO Movie opened with a massive $69 million Fri-Sun debut weekend in February of 2014 partially because it was the first big kid flick since Frozen in November of 2013. The Disney toon legged out to $400 million domestic from a $93 million Wed-Sun (wide release) debut partially because much of its competition was adult-skewing (Lone Survivor), hyperviolent (Hunger Games: Catching Fire, The Hobbit: The Desolation of Smaug) or PG-rated movies aimed at adults (Saving Mr. Banks, The Secret Life of Walter Mitty). Sonic the Hedgehog, a PG-rated throwback to 1990’s kid flicks (sans the coming-of-age angle) that was more concerned about entertaining today’s kids versus nostalgic adults, arrived after The Grudge, 1917, Bad Boys for Life, The Gentlemen, The Rhythm Section and Birds of Prey. 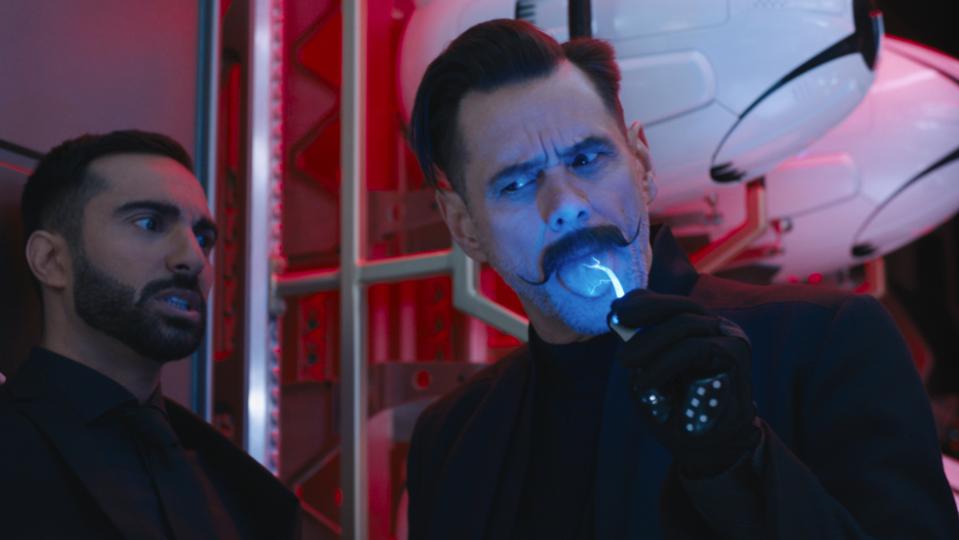 Lee Majdoub and Jim Carrey in SONIC THE HEDGEHOG

Paramount Pictures and Sega of America, Inc. All Rights Reserved.

Yes, that’s partially why Frozen II and Jumanji 3 stuck around long after Christmas, with the former earning $472 million domestic and $1.435 billion worldwide and the latter earning $309 million domestic (from a $59 million debut) and around $785 million worldwide. Sonic the Hedgehog is the year’s second excessive overperformance for an IP flick that surpassed expectations at least partially because it was better than expected. Yes, just as surprisingly strong reviews helped make Bad Boys For Life into (eventually) the first “new” January release to top $200 million domestic, a deluge of “Hey, it’s actually pretty decent” reviews arrived just before opening day to move the needle in a positive direction. No, that didn’t work for DC Films’ Birds of Prey, but c’est la vie.

The Jeff Fowler-directed and Tim Miller-produced live-action adventure, starring a CGI-animated version of the title character, isn’t some grand new fantasy classic. But it’s an enjoyable kid-targeted flick, better than most “CGI cartoon character goes on a road trip with a human” flicks that have been popping up since The Adventures of Rocky and Bullwinkle in July of 2000. It offered plenty of small-scale entertainment value, including an old-school comic turn from Carrey and a Tom Cruise-meets-Brendan Fraser “aww shucks” heroic performance from Marsden, for those not breathlessly anticipated a Sonic movie. Carrey was a smart casting choice, as the first Sonic game (1991) and Jim Carrey’s post-In Living Color breakout (1994) occurred almost concurrently. Carrey offered specific comic pleasures for kids and their nostalgic parents.

Sonic himself was appropriately charming and (thanks to the alterations) visually matched to the source material. The character was faithful even if the movie wasn’t necessarily a straight-up adaptation of the Sega video games. However, the film’s fish-out-of-water plot did not preclude a sequel from being a more faithful offering, in terms of “Sonic runs around Mobious and collects rings while bopping enemies” adventure, down the line. And with a $70 million four-day opening, Paramount has to be brainstorming the next chapter as we speak. In terms of three-day openings, this is Paramount’s biggest non-Mission: Impossible launch since Star Trek Beyond ($58 million in July of 2016), and their first successful “new” IP-specific franchise launch since Teenage Mutant Ninja Turtles (a $65 million debut) in July of 2014. 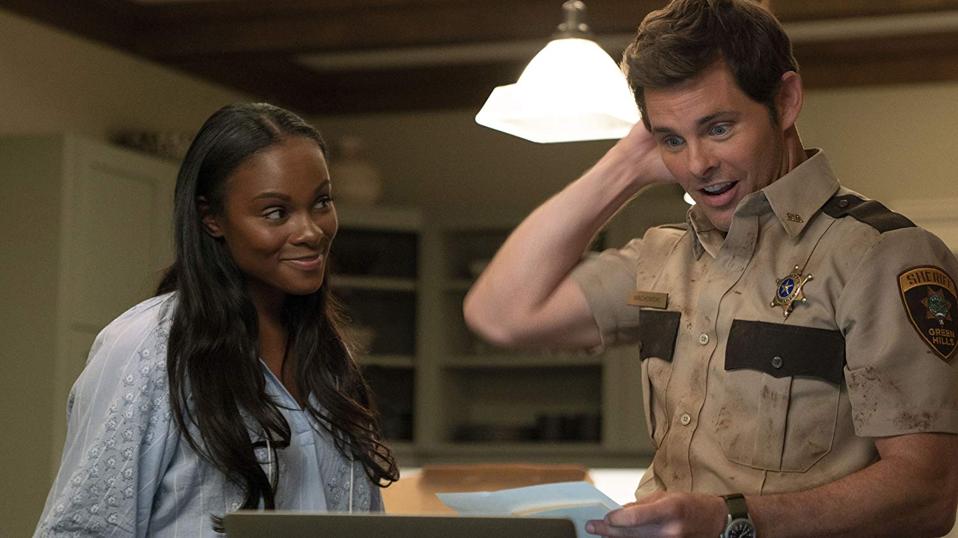 James Marsden and Tika Sumpter in ‘Sonic the Hedgehog’

The Viacom-owned studio has had a miserable last few years, with their big IP (Star Trek, TMNT, Transformers) collapsing, DreamWorks ditching them for Fox (and now Universal) and the MCU that they helped launch becoming the crown jewel of the Walt Disney empire after the Mouse House bought Marvel in late 2009. Like Sony, they have struggled mightily with the collapse of the star+concept studio programmer as general moviegoers abandoned the multiplex for non-tentpoles in order to binge VOD/streaming content instead. The inability to spawn hits out of “just a Tom Cruise thriller” or “just an Adam Sandler comedy” have left Paramount and Sony trying to squeeze franchise juice from questionable IPs. One surprise smash does not a revolution make, but Paramount really needed this one.

Call of the Wild is tracking low (especially for a $125 million flick, potentially giving Disney its own Dolittle) while Invisible Man is another R-rated biggie. There’s no real competition for Sonic until Pixar’s Onward on March 6. Legs like Daredevil ($103 million from a $45 million Fri-Mon launch this weekend in 2003) or Deadpool ($363 million/$152 million in 2016) gets it to $160-$165 million domestic, making it the biggest-grossing video game movie in unadjusted domestic earnings. Legs like Black Panther ($700 million/$242 million) or Kingsman ($128 million/$41 million) or Carrey’s Bruce Almighty ($243 million/$85 million over Memorial Day weekend 2003) will put it at $200-$218 million. I’m assuming comparisons to Fifty Shades of Grey ($166 million/$94 million) or The Wolfman ($61 million/$38 million) aren’t in play.

Overseas is more complicated, since China is still closed for business, meaning even the disappointing $93 million earned by Detective Pikachu may be off the table. We’re now going to see Hollywood getting hurt by China’s current theatrical shutdown, as the likes of Bad Boys For Life and Birds of Prey weren’t betting on a big Chinese payday and even Dolittle was tracking for a $15 million debut when the coronavirus caused the theaters to shut down over what should have been a $1 billion-plus New Year’s weekend. Video game movies (Warcraft, Rampage, Ready Player One, etc.) have been big in China, and a continued blackout could be even more problematic for (much bigger-budgeted) Mulan and No Time to Die. We’ll cross that bridge if and when.