Breaking
Everything You Need to Know About Corporate Social...
Is Adaptive Leadership the Key to Motivating Employees?
Why business events are set to return with...
Business events set to return with a bang!
Expanding Internationally: 5 Things to Consider for eCommerce...
How the Machine Shop Is Going Digital in...
Sustainable Food Packaging Is Helping the Hospitality Sector...
Top 5 Investment Practices To Make More Money...
Managing IT Requirements for SMEs: 5 Aspects that...
How To Build a Successful Luxury Brand In...
Finding The Best Google AdWords Consultant for Your...
8 Top Tips To Help Your Agricultural Business...
Three Reasons Why Office Décor and Design Are...
Looking To Improve Efficiency In Your Business? Here’s...
AI and machine learning for business
How Social Media Changed the World
Home Technology Boxing P4P Ranking December 2019: It’s Time To Stop Denying Deontay Wilder
Technology 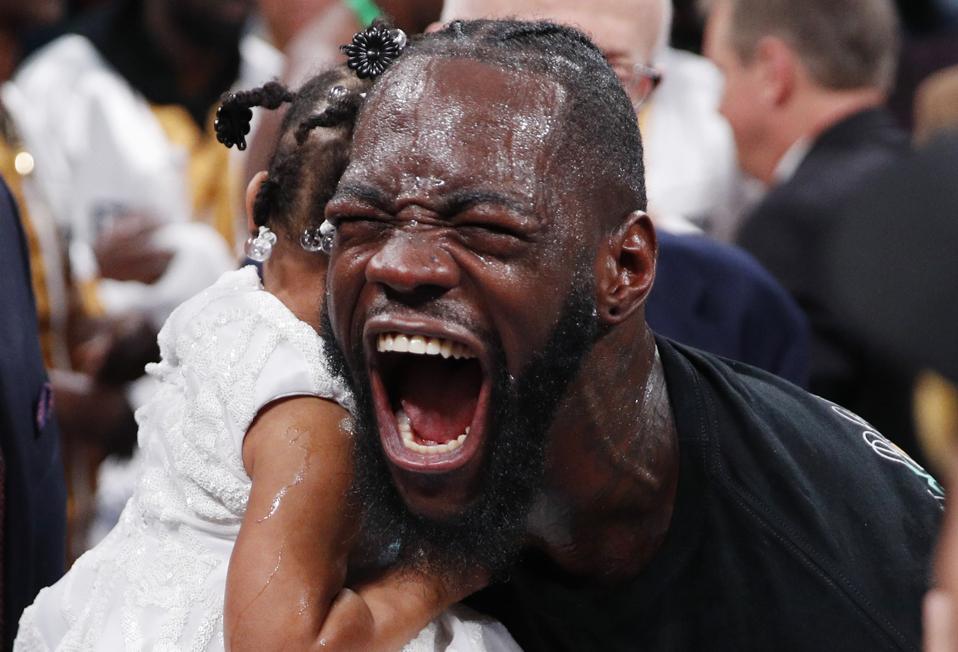 As we head into the final month of 2019 with a number of solid fights on the ledger, we have a moment to pause and list the Top-10 pound-for-pound fighters in the sport.

Following another stunning KO victory, I think it’s time everyone stop criticizing Deontay Wilder for his lack of conventional boxing skills, and start appreciating his dominance.

How high is he on the pound-for-pound list? Take a look. 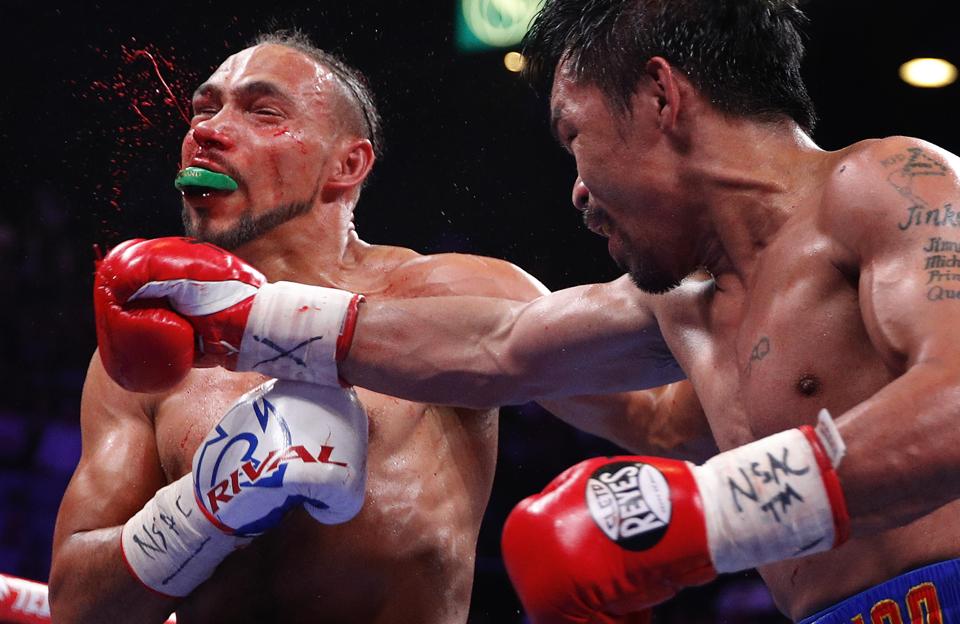 Manny Pacquiao, right, lands a punch against Keith Thurman in the fifth round during a welterweight … [+] title fight Saturday, July 20, 2019, in Las Vegas. (AP Photo/John Locher)

The Filipino legend turns 41 this month, but he proved in 2019 that he is still capable of competing with the elite welterweights in the world. He’ll likely return to the ring in the first or second quarter of 2020. There’s even a chance we see the rematch between Pacquiao and Floyd Mayweather Jr. at some point next year. Stay tuned. 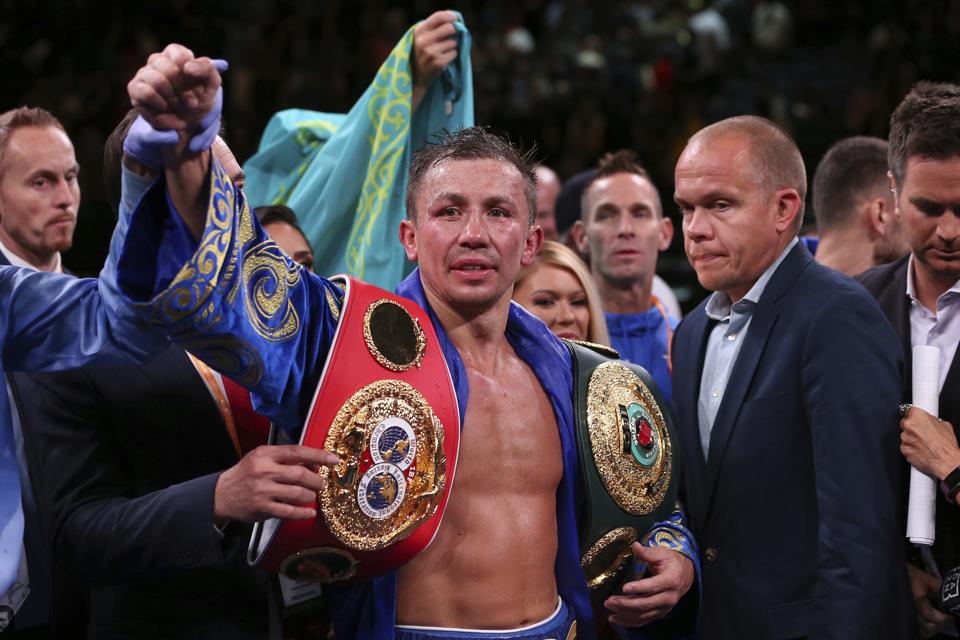 After landing with DAZN, Golovkin was eyeing a third meeting with Canelo Alvarez. Things didn’t go exactly as planned as he was pushed to his limit by Sergiy Derevyanchenko in October, and Canelo seems disinterested in a trilogy.

Still, Golovkin has never been definitively beaten by anyone, though his skills do appear to be on the decline. 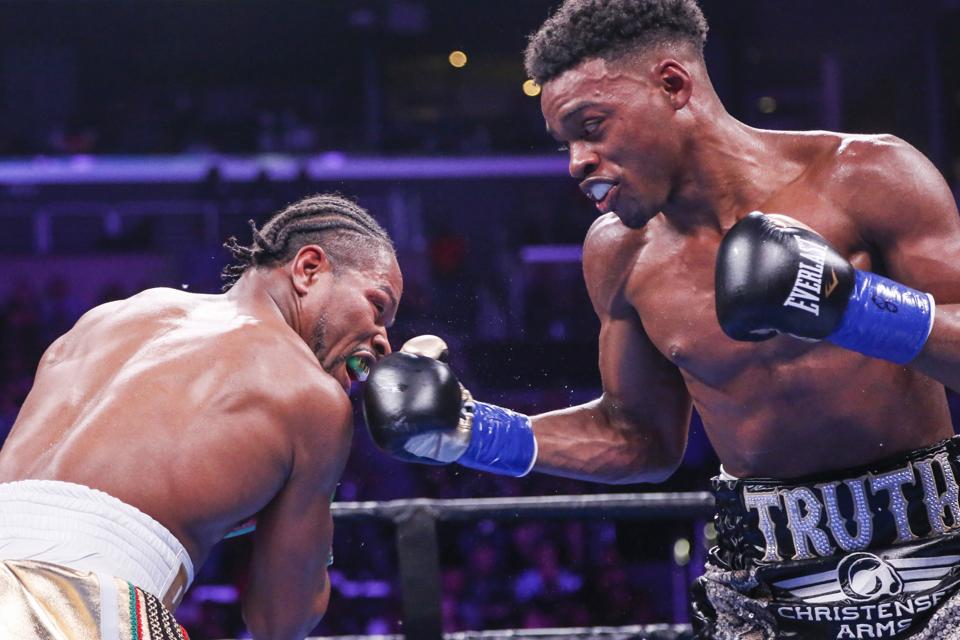 The Truth is expected to make a full recovery from injuries suffered in an automobile accident in early October, but he figures to be looking at a lengthy layoff by the time he gets back into the ring.

We’ll also have to wait and see if there are any lasting mental effects that impact him as a fighter. Spence could stand to improve his discipline to make weight cuts a little easier and to spruce up his overall professionalism.

His war with Shawn Porter was exciting to watch, but it also may have made Spence look beatable. Nonetheless, he’s still an elite, undefeated talent whose physical gifts and toughness have stood up to every challenge that has come his way. 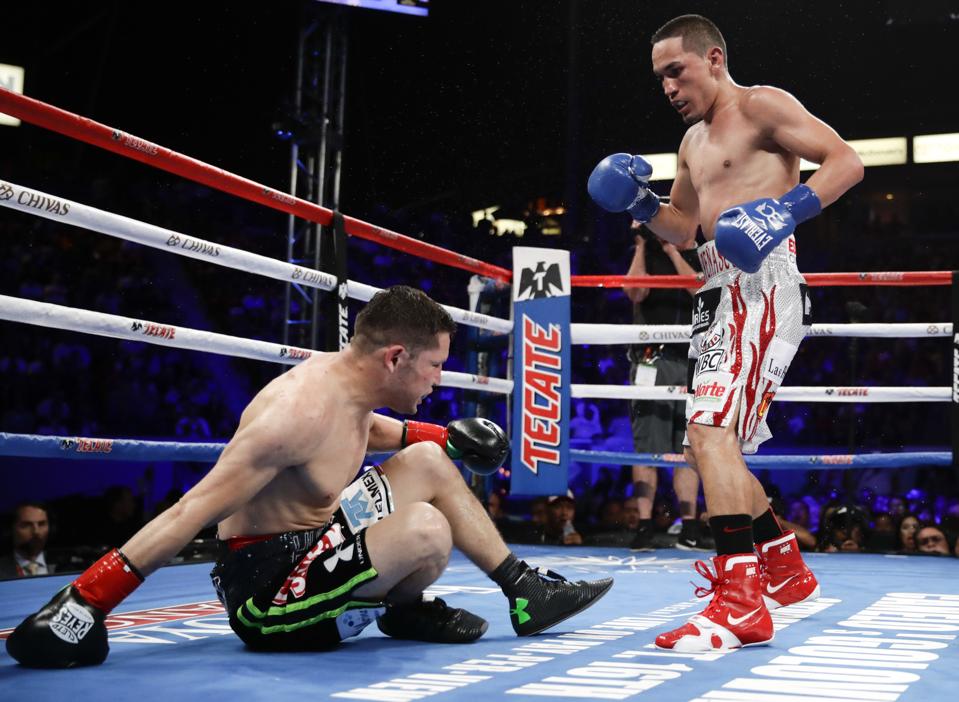 The most underrated Mexican fighter in boxing is the 29-year-old from Hermosillo. Estrada is the current king of the super flyweight division, though he only holds the WBC, Ring Magazine and lineal titles in the weight class.

If Estrada was in a larger weight class, he’d be one of the biggest stars in the sport teetering on becoming a pay-per-view attraction. In April, Estrada avenged his loss to Srisaket Sor Rungvisai and he has won four straight fights over top competition like Felipe Orucuta and Dewayne Beamon.

If you haven’t had an opportunity to catch him in action you should make it your business to put him on your radar. 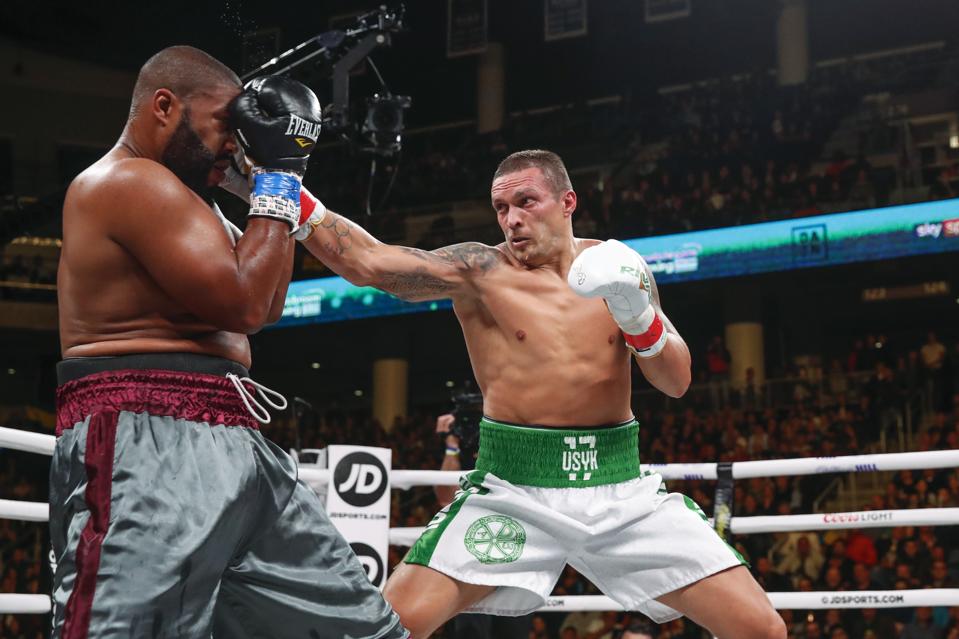 After completely conquering the cruiserweight division, Usyk finally made his heavyweight debut in October when he forced Chazz Witherspoon to retire on the stool after the seventh round. Usyk was originally supposed to face Tyrone Spong, but the latter failed a pre-fight drug test.

In any case, Usyk has the look of a future champion at heavyweight, but he still needs to be tested against one of the top fighters in the division. 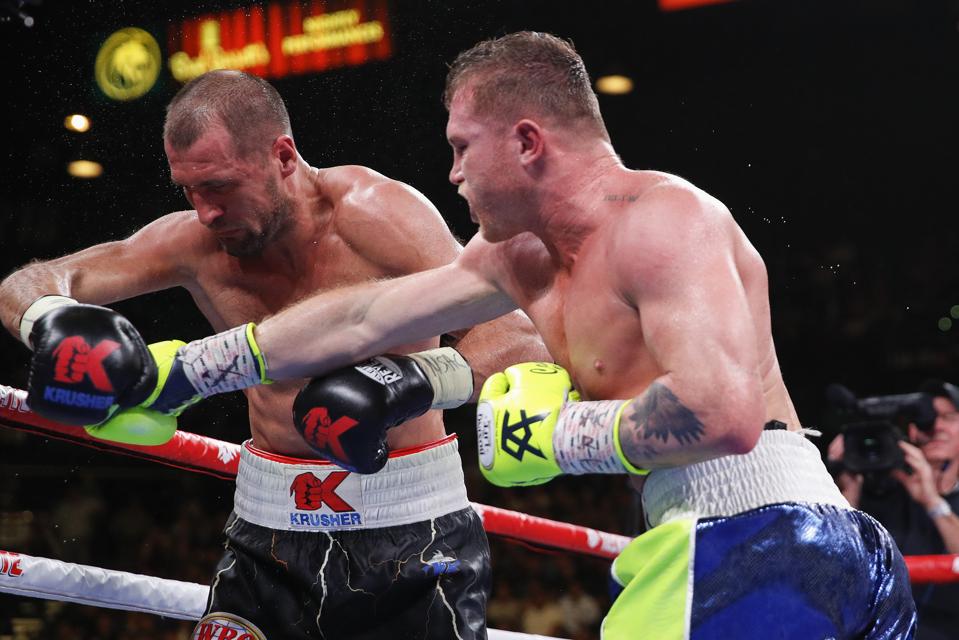 Some may have Alvarez a little higher considering he holds titles in three different weight classes, but I’m taking off some points for his choice of opposition. He cherry-picked Rocky Fielding at 168 pounds and did the same thing with Sergey Kovalev at 175.

Kovalev obviously has a name, but his skills have eroded a bit and everyone knew he was vulnerable heading into his fight with Canelo in November. Canelo is a great fighter, but a win over Demetrius Andrade or Jermall Charlo would be more impressive than knocking out an aging Kovalev. 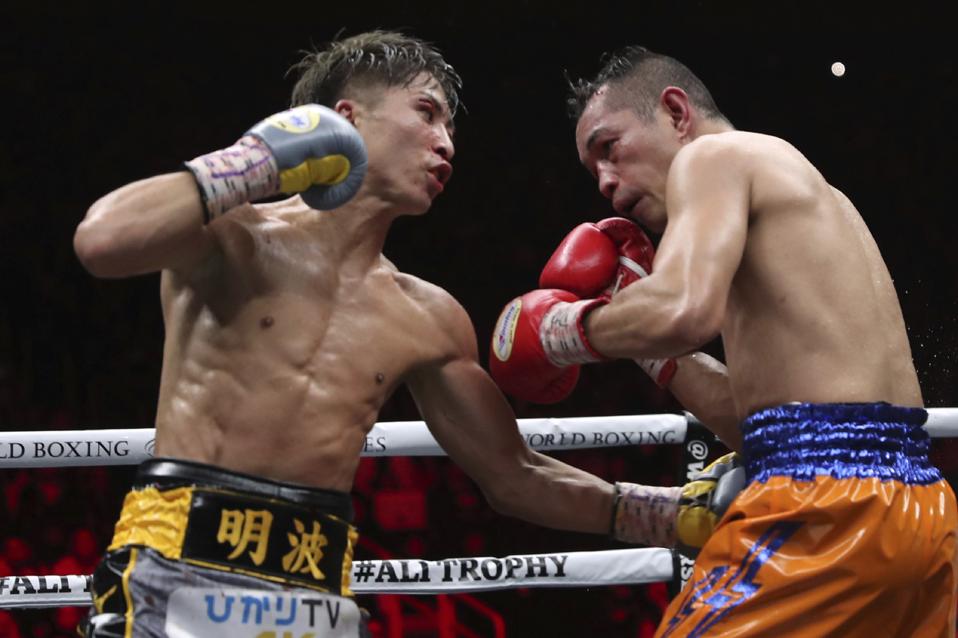 I was tempted to list The Monster as high as No. 2 in these rankings. His win over Nonito Donaire in November showed some vulnerability, but it also unveiled a quality we hadn’t seen, which is toughness. For the first time since Inoue turned professional, he was challenged, and it didn’t come from just anyone.

Donaire is a future Hall-of-Famer who can still compete on an elite level, and Inoue passed the test. It will be exciting watching the next steps of Inoue’s career unfold on ESPN and with Top Rank Boxing. 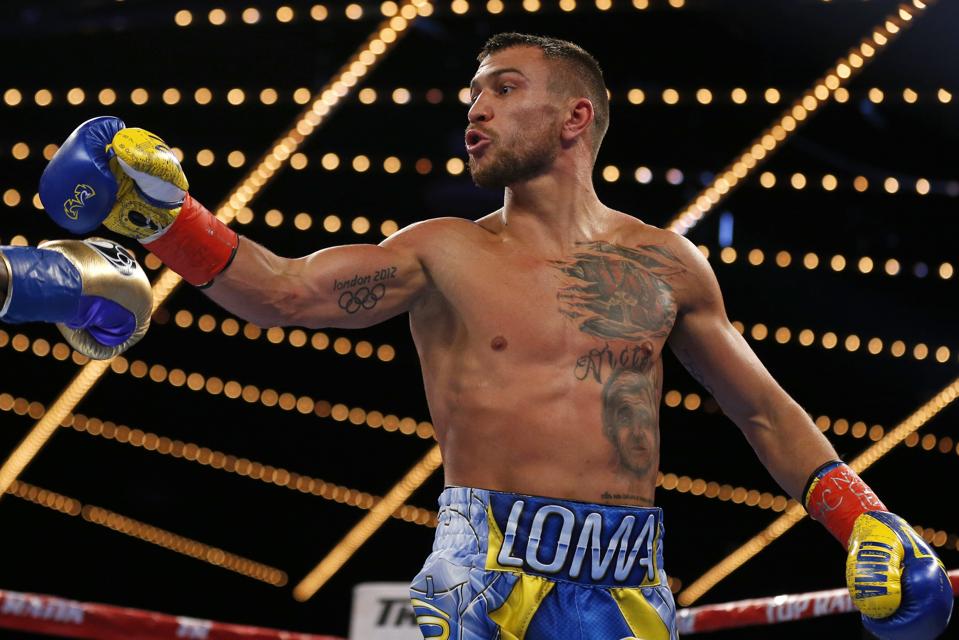 Vasyl Lomachenko, of Ukraine, reacts toward Guillermo Rigondeaux at the end of the second round of a … [+] WBO junior lightweight title boxing match Saturday, Dec. 9, 2017, in New York. Lomachenko won the bout. (AP Photo/Adam Hunger)

If we’re judging on pure in-ring skill, there is no one better than Lomachenko. His footwork, instincts, punching accuracy and overall in-ring package is amazing. He finished 2019 2-0 with an explosive KO of Anthony Crolla and a gutsy victory over a game and skilled Luke Campbell in August.

I don’t have Lomachenko higher because he does have a loss on his record. He’s also been down in his fight against Jorge Linares. Those things don’t take away from Lomachenko’s greatness, but they do separate him from the two men above him in these rankings. 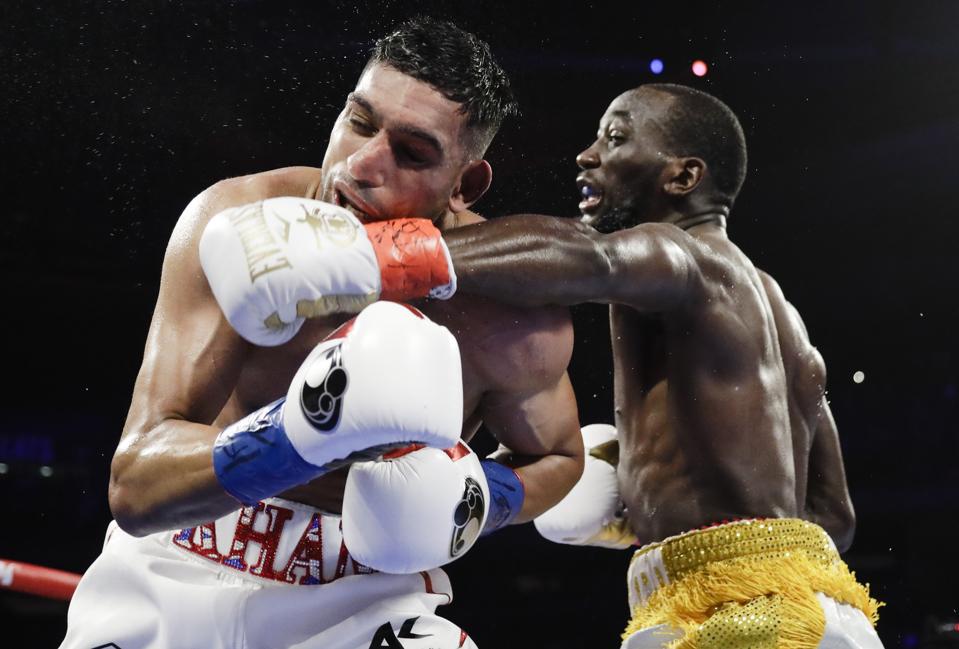 Bud isn’t just undefeated, he has had very little difficulty with his opponents on the way to unifying he 140-pound titles and maintaining the WBO welterweight strap.

Later this month Crawford will put his title on the line against the undefeated Egidijus Kavaliauskas. Crawford will be a major favorite and fans will continue to hope for a fight between him and Spence, or any of the other elite welterweights currently linked to Premier Boxing Champions. 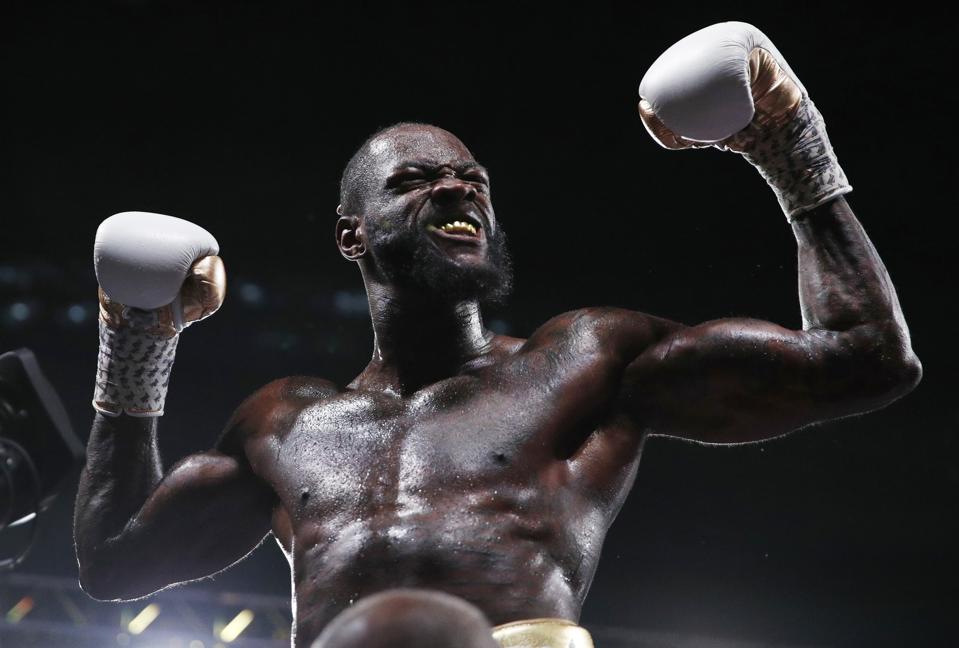 Yes, I just did that.

Forget about his skinny legs. Forget about the penchant to become wild when he hurts an opponent. All you need to know is that Wilder’s opponents have the smallest margin for error of any fighter on the planet. Luis Ortiz saw this firsthand in his rematch with the WBC champion last month.

All it takes is one, and no fighter embodies this concept more literally than Wilder. I did score his first fight with Tyson Fury for the Gypsy King, but Wilder is still officially undefeated. There is no doubt in my mind that when Wilder faces Fury in the rematch in February, he will win by KO. Furthermore, I’m convinced Wilder knocks out Andy Ruiz or Anthony Joshua as well.

‘Trial By Fire’: An FC Barcelona Versus Atletico Madrid Preview