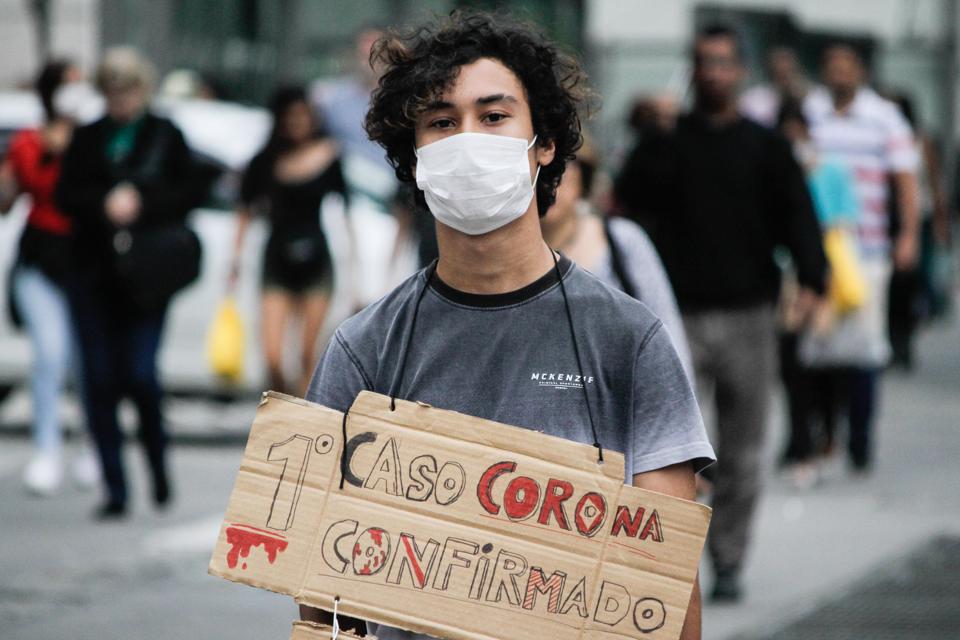 A man wears a protective mask and a sing about the first case of coronavirus in the city of Sao … [+] Paulo, on February 27, 2020. Two people have it. It comes at a time when political turmoil continues to threaten the economy. (Photo by Fabio Vieira/FotoRua/NurPhoto via Getty Images)

Roughly two weeks have passed since the Carnival holiday in Brazil, of which all the excitement centers on Rio de Janeiro, Carnival’s home. People from all walks of life, all ages, all countries, party like rock stars. They probably didn’t bring Purell. Unless they were dressed up like a doctor at a samba parade, they weren’t in surgical masks either.

This week, Rio de Janeiro reported its first case of the new coronavirus COVID-19. That’s within the two week incubation period and within a week of Carnival’s last day on February 26. This is not good news.

Little is known about the Rio case. Did this person attend any Carnival parties? Assuming a handful who did have the coronavirus, this puts Brazil on the cusp of being the number one country in Latin America to be infected.

People who caught the coronavirus from international travelers, mainly Italy, will know about it within the next week.

Brazil’s first case was discovered roughly 10 days ago and spread to family and friends by a man coming back from Italy. Italy is now the epicenter of the disease spreading throughout Europe.

Brazil now has 8 cases, according to the Health Ministry. Public health officials are looking into 636 more in numerous states, not just Rio. The Johns Hopkins University coronavirus data tracker is off the ball when it comes to Brazil. They have Brazil with only four cases. It is at least double that.

As these numbers increase, the Brazilian real will hit another historic low, this time at five to the dollar. It is currently trading at R$4.62, already its weakest level ever.

“In countries that are fragile, like Brazil, this becomes one more headwind that will add a lot of concern,” says Emily Weis, a macro strategist specializing in Latin America for State Street in Boston. “This could end up tipping the scale against Brazil.”

Brazil’s weak real is not the fault of its government. 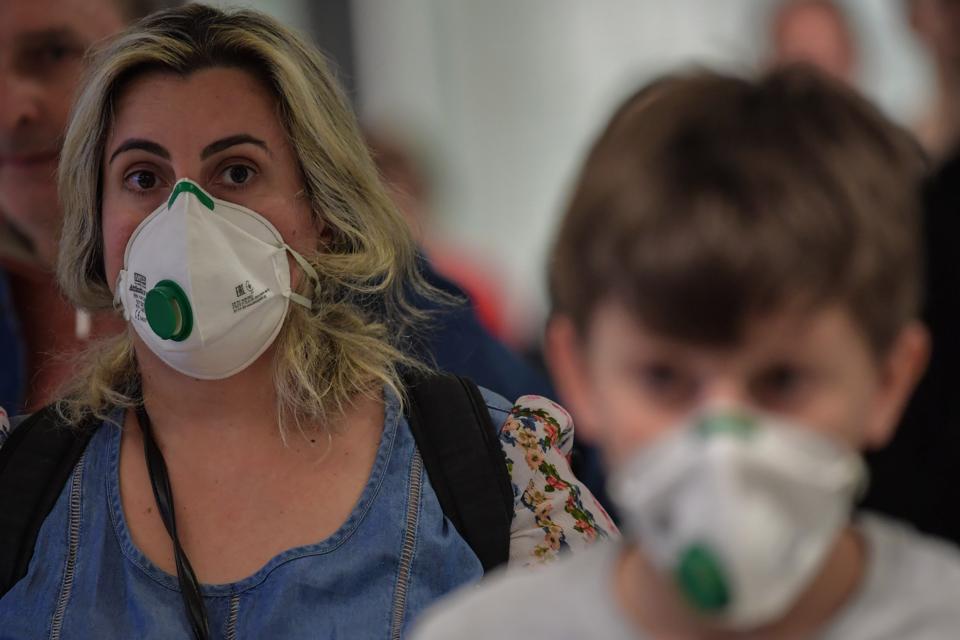 Passengers wearing masks as a precautionary measure to avoid contracting the new coronavirus, … [+] COVID-19, arrive on a flight from Italy at Guarulhos International Airport, in Guarulhos, Sao Paulo, Brazil on March 2, 2020. Brazil should suspend these flights. (Photo by Nelson ALMEIDA / AFP)

The currency has lost its appeal as a carry-trade. It used to be a favorite of countries like Japan, where investors would borrow domestically at low interest, and invest in Brazilian local currency bonds that paid double digit interest.

Those days are gone. Brazil’s inflation is low. It’s interest rates are low. That’s the main reason why the Brazilian real is trading over R$4 even as the economy grows.

The Brazilian Central Bank does not seem all that worried about it. Unless the weaker real passes through to inflation, investors expect them to let it go.

“I think the question is at what point do you think the Central Bank is more likely to intervene and I don’t think that is a function of a certain price,” says Patrick Esteruelas, head of research at Emso Asset Management, a $5.5 billion money manager investing in emerging market debt in New York.

They are already getting involved and announced another $4 billion currency swap auction for Friday.

The JP Morgan fund manager survey from mid-February has Brazil government debt massively underweight. Brazil banks were underweight. Local currency debt was a slight overweight thanks to yield of around 4%, and expectations that the central bank could cut rates again, pushing up bond prices.

Over the last four weeks, the iShares MSCI Brazil (EWZ) ETF has fallen over 13%. 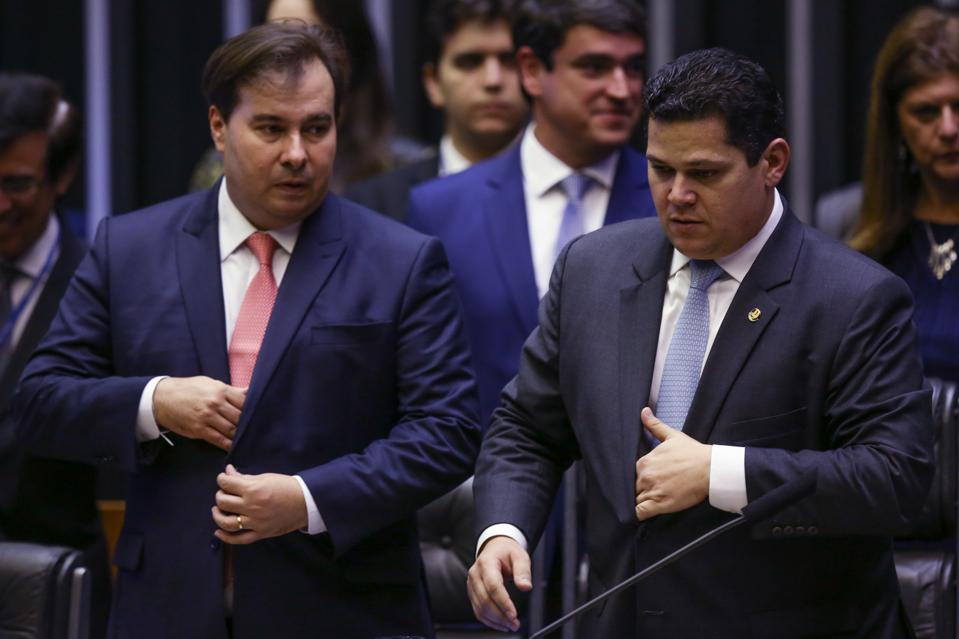 Brazil’s coronavirus scare is coming at a time when the ongoing political battle between president Jair Bolsonaro and an unpopular congress threatens to roll over the country’s economy.

It’s technically true that any Brazilian president has to be careful how much he provokes the Congress as an institution, including calling people to protest in the streets on March 15 against its leaders in the lower house and Senate. But populism gives Bolsonaro a unique level of resilience against the congress, arguably the most distrusted institution in all of Brazil.  He’s doubling down on how he wants things to be run and doesn’t care if Congress likes it or not. His supporters have his back.

If not for the coronavirus outbreak worldwide, the story of Bolsonaro versus the congress would be giving top down investors in Brazil a migraine.

The Bolsonaro Administration is simply plowing ahead with the business of governing entirely on their own terms.

“Reform is a winner, especially if it also fans the anger and frustrations of the people who voted for Bolsonaro in 2018,” says Kevin Ivers, vice president of the DCI Group, a Washington DC based consultancy with hedge fund clients.  “Disruption is the order of the day in Brazilian politics now, so you just have to get used to it,” he says. 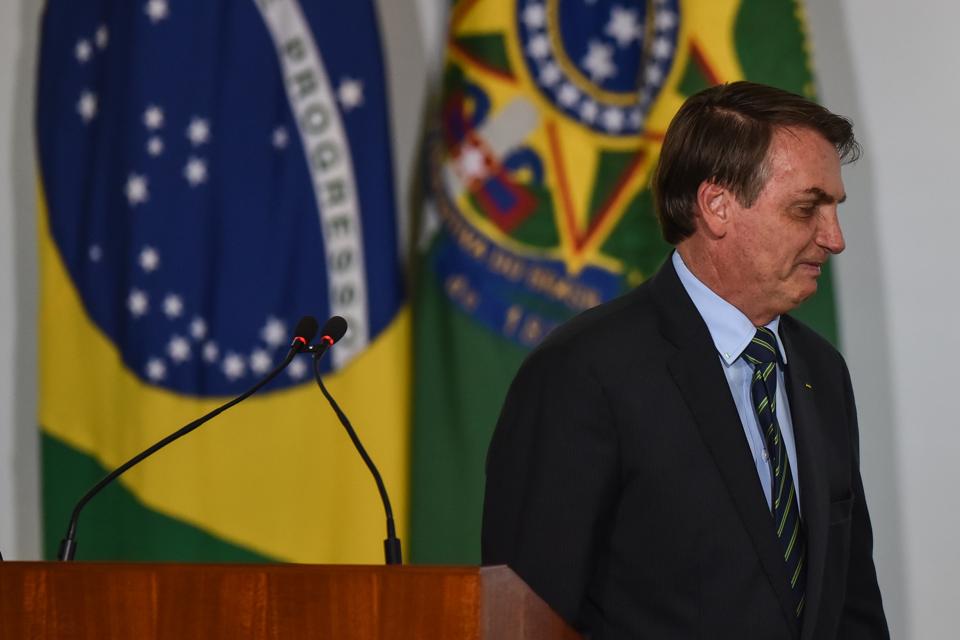 Brazilian President Jair Bolsonaro on March 4, 2020. What measures are being taken to stop the … [+] spreading of the coronavirus in Brazil? If his government fails to act at containment, it threatens to upend the economy. (Photo by Andre Borges/NurPhoto via Getty Images)

Bolsonaro has come out okay in the ongoing political novella not all that different than the one’s facing President Trump in the U.S.

Like Trump, Bolsonaro’s approval rating is rising in the chaos, hitting 42.5% in February, up from 33.3%.

When asked about the coronavirus impact on the economy, 72.6% of survey respondents said it would have an “average” impact and 35.8% said the impact would be “low.” These numbers came before the first case was reported in Sao Paulo after Carnival. If Brazil is anything like the rest of the world, the locals will start getting nervous as confirmed coronavirus cases rise.

Brazil’s economy grew 1.1% last year, after expanding 1.3% in each of the previous two years, the Brazilian Institute of Geography and Statistics said Wednesday. GDP increased 0.5% in the fourth quarter, down from 0.6% in the previous one. Consensus was for Brazil to grow over 2% last year.

“It’s an important question to ask now — what impact does the coronavirus have on Brazil,” says Jeff Grills, head of emerging market debt for Aegon Asset Management in Chicago. “It’s something I surely can’t predict. If the (Brazilian) real went to five, though, I think I’d be a buyer because the skew to the upside would be higher.”

An outbreak plus political crisis is a negative for Brazil, a country still reeling from its worst ever political crisis under the leadership of the Workers’ Party, and a two-year’s long recession.

For now, Brazil’s currency weakness isn’t because the market doesn’t like the country’s biggest securities, whether Petrobras bonds or equities. 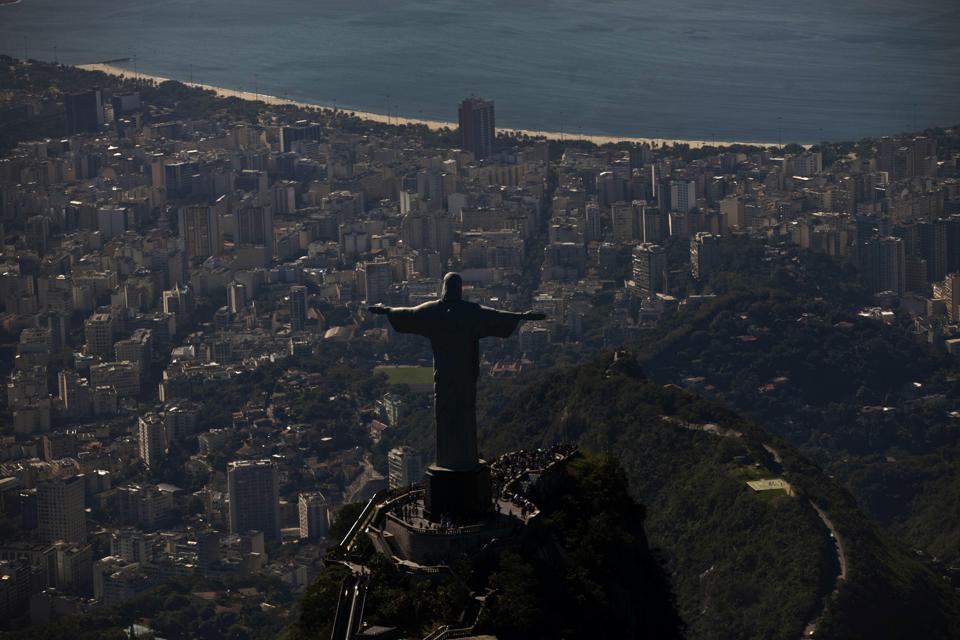 But if the Brazilian government fails to control the spreading of the coronavirus, including taking measures to suspend air travel to Italy and South Korea, then the next leg down in the currency can all be blamed on a Brazil coronavirus risk-off event.

Wall Street and Main Street need to see Brazil doing something to inoculate itself. Investor sentiment that’s already low will only go lower. People will self quarantine, as is happening in the U.S., spending less money in a consumer economy that is dependent on them, driving business sentiment back down again.

Public health is now top of mind in Bolsonaro’s Brazil. When he swept into power, it was all about corruption and violent crime. Perception is that Bolsonaro is handling corruption and crime. So Brazilians are onto something else. Coronavirus squares terribly well with the new number one concern.

A poll by Datafolha conducted in December had health listed as the number one issue, followed by education, public safety, and jobs.