There is a void in Caribbean regional dialogue on how to address issues surrounding food and nutritional security, climate change adaptation and mitigation, deteriorating public health and reduced sustainable livelihoods. With economic over-dependence on tourism, extreme reliance on imported foods, growth in non-communicable diseases, increased hunger, malnutrition and obesity and heightened vulnerability to the impacts of climate change, a holistic solution is required. A Trinidadian Agricultural Economist and Instructor at the University of the West Indies’ (UWI) Faculty of Food and Agriculture believes he has the answer. Breadfruit. 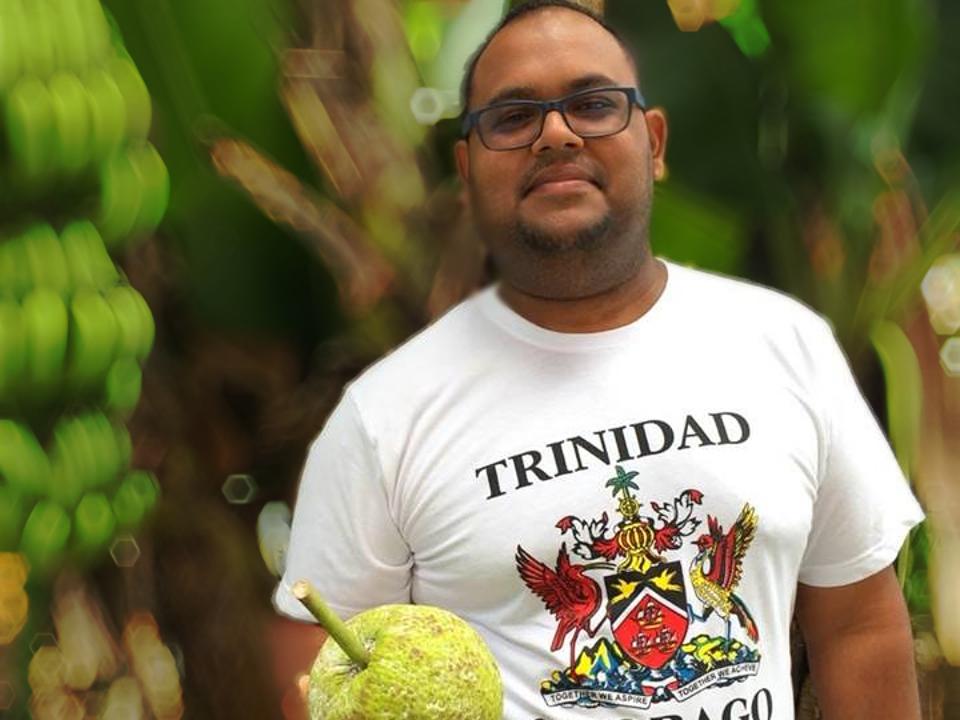 Agricultural Economist, Omardath Maharaj is a man on a mission

It is December 2019 and Omardath Maharaj is attending the Barrackpore Police Youth Club annual end of year celebration for members and their families, as a representative of the initiative, ‘105 To Stay Alive’. But unlike the red and green array of fancy wrappings at typical Christmas events, Maharaj is in attendance with 105 gifts of breadfruit trees.

Given its adaptability to local climates and potential to contribute to food and nutritional security, income generation and the preservation of traditional food systems, all of which have been challenged by climate change, Maharaj believes that breadfruit should be much higher on the agriculture policy agenda.

Instead, breadfruit’s image has been one of minor economic importance. Despite widespread growth throughout the region, many trees grow on abandoned land and there is limited focus on commercial orchards.

‘105 To Stay Alive’ is a collaborative civil society initiative driven by the University of the West Indies, BreadfruitTrees.com, as well as local Trinidadian clubs and voluntary and advocacy groups. To date, the project has supplied several thousand breadfruit trees to various schools and communities across the island.

Maharaj projects that the collective effort will provide a minimum of 2.64 million pounds or 1,320 tons of free food to the people of the Republic of Trinidad and Tobago by the year 2022 and onwards perhaps up to 5 decades.

“105 Breadfruit trees can be planted comfortably on 2.5 acres of land,” explains Maharaj. “These will each produce around 300 Breadfruit every year. The 31,500 breadfruit weigh approximately 252,000 pounds; this provides 126 tons of food mass!”

“With production of approximately 300 fruits per year with mature trees, one simple intervention could impact more than 10,000 families if we begin to share our resources, talk with our neighbours, and genuinely look out for each other’s interests. It is literally bread that grows on trees, food for our future,” Maharaj affirms.

A highly nutritious, starchy staple crop, breadfruit has great potential to address hunger and malnutrition across the region. Just 100g or a ½ cup provides 25% of the recommended daily allowance (RDA) of fibre, and 5–10% of the RDA for protein, magnesium, potassium, phosphorus, thiamine (B1), and niacin (B3). Breadfruit is low in fat and is a good dietary option for diabetics. 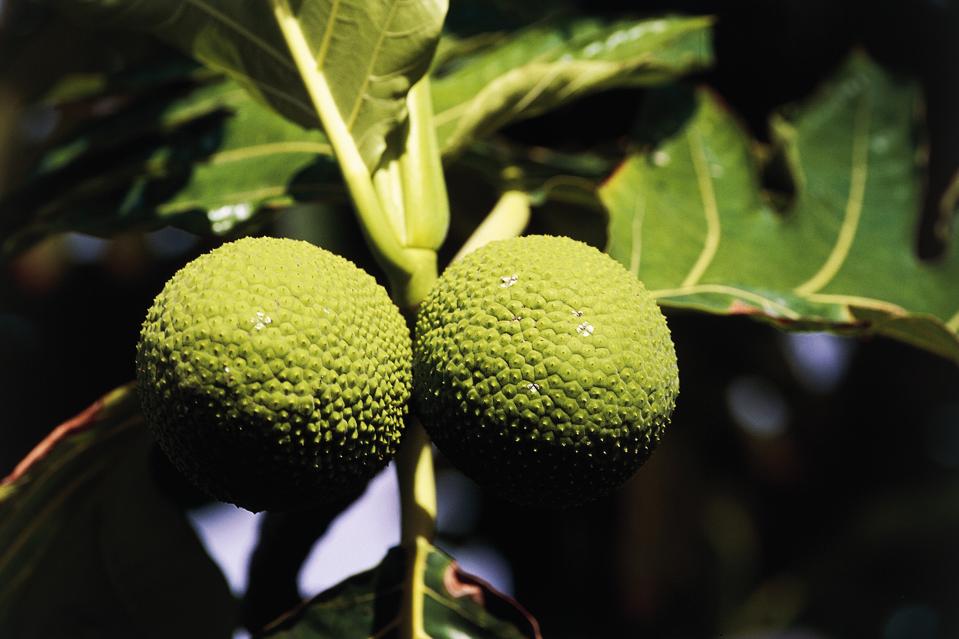 Fruit of the breadfruit tree (Artocarpus) (Photo by DeAgostini/Getty Images)

Breadfruit is also well loved and can be cooked a variety of ways. According to a 2005 study reported in the journal Food Quality and Preference, 87.4% of Trinidadian survey respondents reported enjoying breadfruit. The main cooking methods include “oil down” (a stew of coconut milk, breadfruit, salted meat, chicken, dumplings, callaloo, and other vegetables) as well as by steaming and boiling. Other methods of preparation include fried, curried, roasted, grilled and in salads. Breadfruit can also be converted to gluten-free flour. Given its ability to absorb flavours, it can be enjoyed as a savoury snack or as a sweet dessert.

Breadfruit is climate adaptable and resilient. It has the ability to grow under most soil conditions and topographies and produces high yields (up to 200 pounds per yield) two to three times a year with little to no maintenance, often growing to maturity from seeds that have fallen to the ground or even from stumps. Breadfruit trees can remain productive for decades and as a perennial, they are also more resilient to climate change impacts such as droughts, high winds, and floods.

A recent piece in Modern Farmer reported that post-Hurricane Maria, almost all crops in Puerto Rico had been destroyed except for one. “In many rural areas just one tree was left standing— breadfruit,” the article read.

Breadfruit also provides opportunities for climate change mitigation. As a perennial, breadfruit trees require less soil disturbance and with a lifespan of 50 or more years, breadfruit trees have the capability to survive for multiple seasons, which means that they have a much higher ability to sequester and protect soil carbon than many other crops. Breadfruit trees can also regenerate degraded land.

“The literature is abundant on breadfruit’s multi-functional role as a substantial food source with various uses including as a gluten-free food, insect repellent, latex material, fabric, and animal feed. Even more important is its acknowledged use in food security planning and hunger prevention in a growing world,” says Maharaj.

Breadfruit’s potential for food security is indisputable. The Caribbean is particularly vulnerable to climate change driven extreme weather events to which the breadfruit tree is highly resilient. In the aftermath of hurricanes and flooding, Caribbean countries have had to rely on canned, processed and packaged foods, the majority of which are imported. Given its large size, a single fruit can feed a family of four and is a much healthier and cheaper alternative.

To be rolled out over the next 3-5 years, phase 2 of the ‘105 To Stay Alive’ project will include the exploration of value-added opportunities, food and menu choices, and more affordable and available meal planning education— especially with regards to children and youths.

“Climate change and its deleterious impacts as well as the recognition that agriculture strengthens the national economy, provides employment and a social safety net to vulnerable areas and segments of the population, as well as its environmental role is growing on the Caribbean psyche,” concludes Maharaj.

“Trade issues, natural disasters, and social inclusion have prompted many countries to dig deeper into their agriculture sectors— investing in its people, food, productivity, and variety. A breadfruit tree is truly valuable and a gift that keeps on giving.”