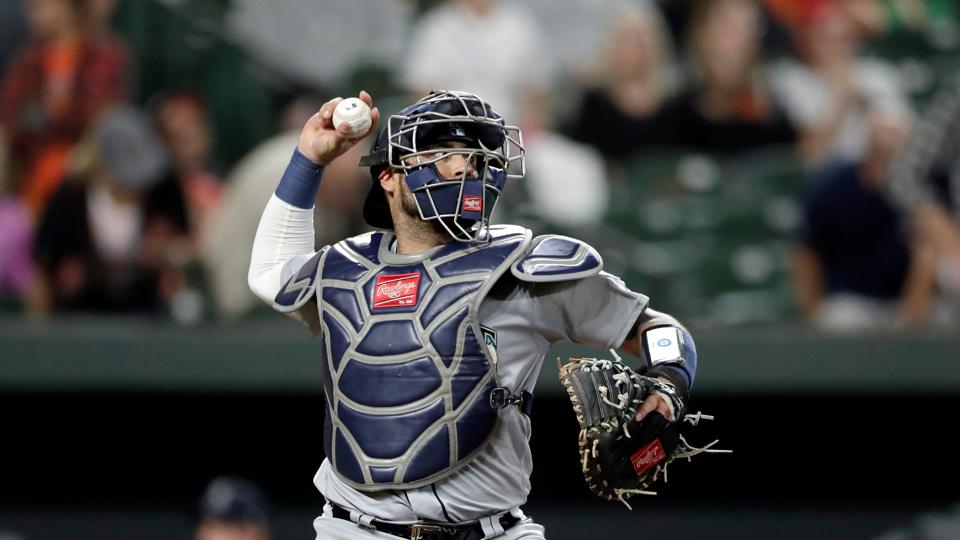 Seattle Mariners catcher Omar Narvaez warms up during the seventh inning of a baseball game against … [+] the Baltimore Orioles, Friday, Sept. 20, 2019, in Baltimore. The Orioles won 5-3. (AP Photo/Julio Cortez)

Brewer fans were getting a bit restless in the early days of this hot stove campaign as 2019 stalwarts Yasmani Grandal and Mike Moustakas left for greener – much greener – pastures. The faithful should now take a deep breath, and comfort in the fact that the club has filled the void left by Grandal’s absence by acquiring Omar Narvaez from the Mariners.

He’s no Grandal – the White Sox paid handsomely for the best combination of offense and defense available at this premium position. Narvaez should at least provide a reasonable facsimile of Grandal’s offensive production, however, at a fraction of the financial price, and prove to be well worth the transaction cost (hard-throwing prospect Adam Hill and a Competitive Balance B draft pick).

Narvaez is a somewhat rare commodity – a left-handed hitting receiver with some pop. He more than doubled his career high in 2019, hitting 22 homers for the M’s. He has gotten it done in a fairly unusual manner, however.

In both of his years as a regular catcher, in 2018 with the White Sox and in 2019 with the Mariners, his average exit velocity has been well lower than league average, both overall and within each batted ball type. One seemingly evergreen characteristic of his offensive profile is his ability to square up the baseball. His liner rates of 29.0% and 26.3% ranked 2nd and 8th, respectively, among AL regulars the last two seasons.

Outside of that, however, Narvaez was a totally different cat in 2019 than he was in 2018. His average launch angle surged from 13.0 to 17.8 degrees, as his fly ball rate rose from 27.1% to 37.5%. Fly ball and grounder frequency rates correlate extremely closely from season to season for individual players; a one-season move this large is extremely rare. His power ramped up because fly ball volume, not authority.

Narvaez was able to do this without materially harming his liner rate or increasing his pop up rate. As a result, his power surged without a decline in batting average. My “Tru” Production+ offensive metric, based on exit speed and launch angle, sees him as more of a league average performer (98 and 99) rather than a 122 and 119 Fangraphs wRC+ guy.

No matter; a league average bat at catcher is a valuable commodity, and that bat should be able to play up even more at Miller Park than it did in Seattle. And he will be paid roughly $2.9M for his services this season in his first year of arbitration. The club will realize a solid amount of excess value if Narvaez can continue to produce at around a 2.0 WAR level. While the White Sox will be stuck with Grandal should he materially decline in his thirties (as almost all catchers do), the Brewers can make decisions on a year-to-year basis with Narvaez through 2022.

The elephant in the room is his defense. Narvaez is a below average framer who cost the Mariners roughly 20 runs behind the plate last season, depending on which metric you believe. While his athleticism is just fair and places a cap on just how good he can become behind the plate, I think there’s reason for hope.

It’s not easy for a player to materially change his batted ball profile, as Narvaez did last season. What’s not to say that a similar level of focus and attention on the defensive side of his game can’t yield comparable results? From all accounts he is a very coachable player, and within hours of this deal, he had already begun to be briefed on Brewer pitchers by his new platoon-mate, Manny Pina.

I’m expecting Narvaez to be an average bat (above average for a catcher) with an average to near average glove, a very desirable player profile, especially at his position. Once you take contract value and term into account, he’s a player who provides the club excess value and affords them flexibility to spend bigger dollars to address their other needs and keep them in the playoff mix in 2020.

Why Has Grocery Outlet Stock Been Trending Lower After A Strong IPO?