US rapper Tyler the Creator collects his award for International Male Solo Artist during the BRIT … [+] Awards 2020 ceremony and live show in London on February 18, 2020. (Photo by Adrian DENNIS / AFP) / RESTRICTED TO EDITORIAL USE NO POSTERS NO MERCHANDISE NO USE IN PUBLICATIONS DEVOTED TO ARTISTS (Photo by ADRIAN DENNIS/AFP via Getty Images)

2020 seems to be treating Tyler, The Creator well so far. Just last month he took home Rap Album of The Year at the 62rd Grammy Awards for his 2019 album IGOR, making it the alternative hip hop artist’s first Grammy win despite being nominated two times and February 18th, Tyler took home another award to add under his belt.

Tyler, The Creator took home the award for Best International Male Solo Artist at the 2020 Brit Awards. This is an interesting win for the popular artist considering the fact that he was only allowed to enter the United Kingdom in 2019 following a 5 year ban.

In his acceptance speech, Tyler decided to give a personal shoutout to former prime minister Theresa May. “I want to give a special shout-out to someone who I hold dear to my heart, who 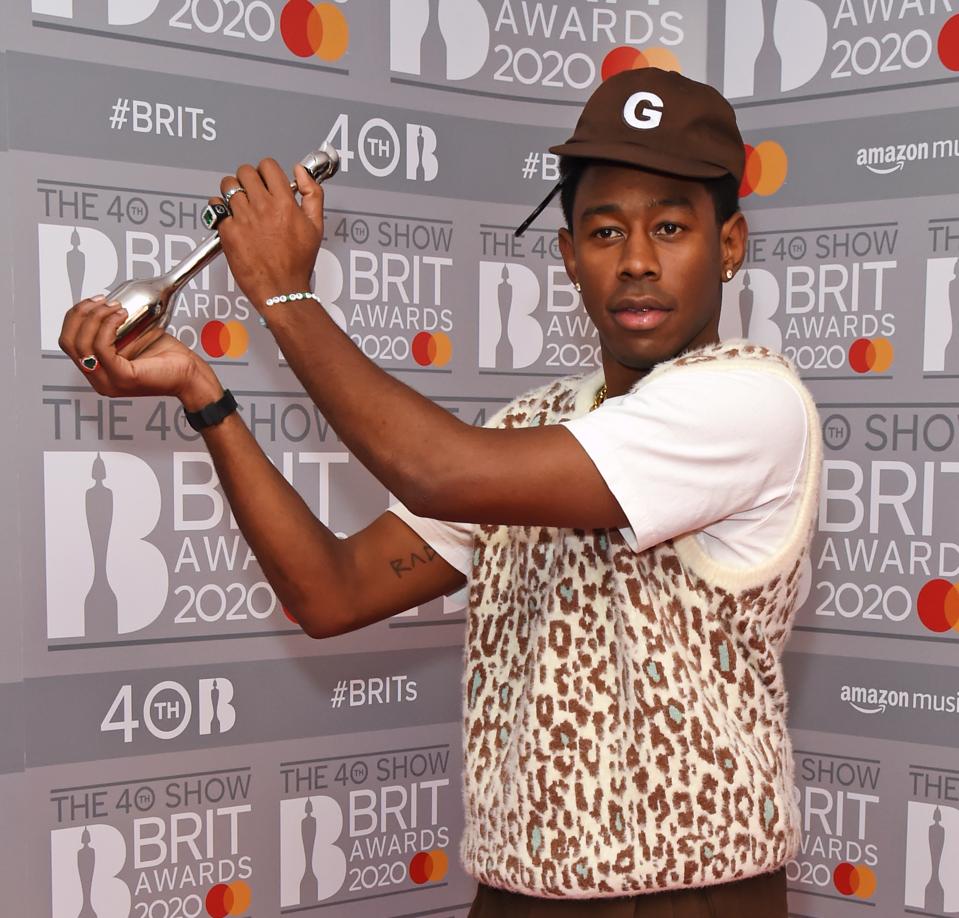 LONDON, ENGLAND – FEBRUARY 18: (EDITORIAL USE ONLY) Tyler, The Creator, winner of the International … [+] Male Solo Artist award, poses in the winners room at The BRIT Awards 2020 at The O2 Arena on February 18, 2020 in London, England. (Photo by David M. Benett/Dave Benett/Getty Images)

made it where I couldn’t come to this country five years ago,” he said to the crowd. “I know she’s at home pissed off. Thank you Theresa May.”

Back in 2015 just before kicking off his UK tour, the “Where This Flower Blooms” rapper had been banned from the United Kingdom for what the Parliament described as his homophobic lyrics that were featured on his two studio albums Bastard and Goblin — May being an instrumental figure in establishing the ban. According to Tyler’s manager and longtime friend Christian Clancy, an official statement from Parliament described Tyler’s work to “encourage violence and intolerance of homosexuality” and “foster hatred with views thats seek to provoke others to terrorist acts.”

Tyler returned to the UK in May of 2019 for a surprise show, but ended up having to cancel his performance over safety concerns.

You can check out Tyler’s full speech here. Also, if you are interested in checking out other highlights from the Brit Awards this year, feel free catch yourself on everything that you missed here.

The Digital Talent Gap Extends Into The C-Suite, Too

Want To Be An Entrepreneur? 10 Questions To...

The COVID-19 Coronavirus Is Now A Pandemic: What...

Why Customer Engagement Should Be Every Business’s Top...