Breaking
Channel Your Impact With a Self-Directed IRA
How To Reach Your Customers This Holiday Season
TikTok Will Limit And Label Videos Prematurely Claiming...
How A British Graphic Novel Publisher Is Leading...
Dow Plunges 600 Points On Third Day Of...
According To A New Study, Patients Are Texting,...
How To Keep Your Digital Media Assets Secure
Be Better At Building Your Team
Saying No In Order To Grow
Sherwin-Williams Stock Is Unlikely To Sustain Its Current...
How Successful Entrepreneurs Use The Law Of Attraction
Elon Musk’s Economics 101 Course For Japan
Raoul Pal: Gold Investors “Will Flip To BTC”...
Dating Site Takes On Social Media Dangers Of...
Trump Campaign Website Hacked In Cryptocurrency Scam
How To Reduce The Stress Of Loneliness–9 Tips
Home Business British Airways Removing Seats On 777s For COVID-19 Cargo While Air France Keeps Cabin Installed
Business

British Airways will join Lufthansa in Europe in removing seats from passenger aircraft to free up more room to carry cargo, including medical supplies like personal protective equipment.

But Air France will not join its peer airline groups and will keep seats installed on its passenger aircraft used for cargo-only flights.

“The seats will be coming out,” IAG CEO Willie Walsh said. “We’ll use those aircraft to carry cargo in the passenger cabin without the seats being installed.”

Walsh said British Airways would modify “a couple” of 777s. He did not specify which cabins would have the seats removed, but other airlines including Lufthansa (below) are only removing economy seats, which have fewer parts. 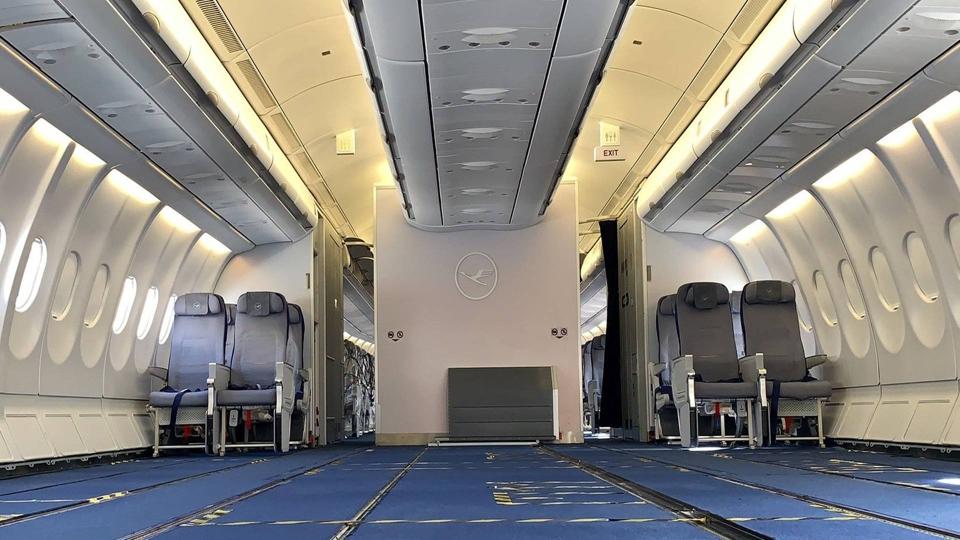 British Airways has been operating cargo-only flights with 777-300ERs in their normal configuration, placing cargo on and below seats. But retaining seats limits capacity and flexibility.

Regulators and aircraft manufacturers have been working to issue new guidelines on how to safely carry cargo in the passenger cabin. 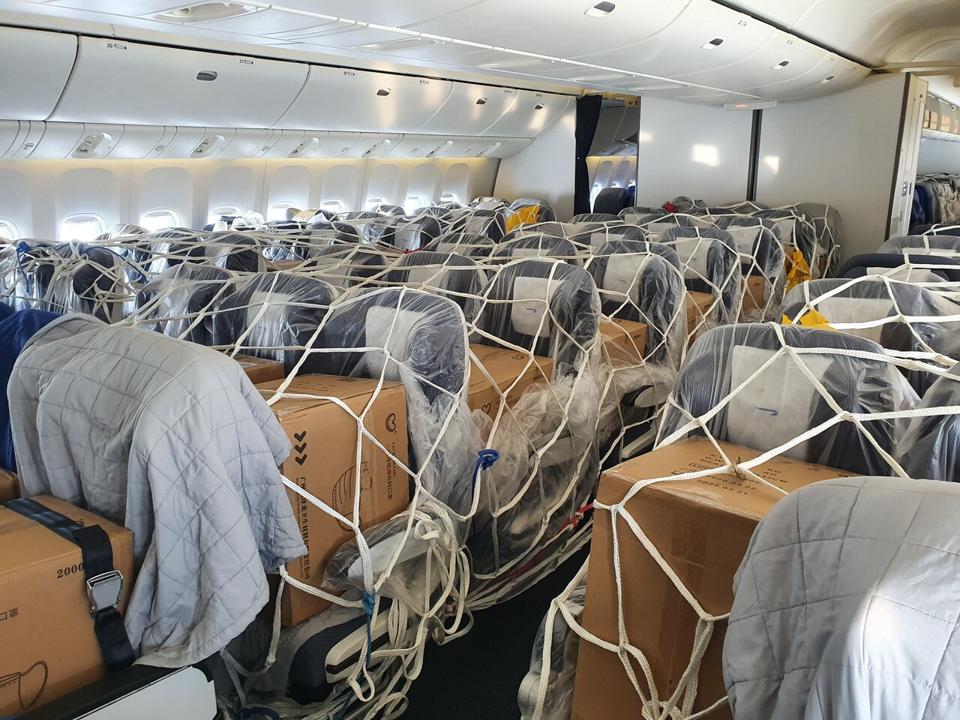 Air Canada, Air China and LATAM have removed seats from their 777-300ERs.

Air France won’t be joining them.

“We have all the capacity on the seats, underneath the seats, in the aisles and the overhead bins as well as the very large cargo capacity of the airplanes underneath in the bellies,” he explained. 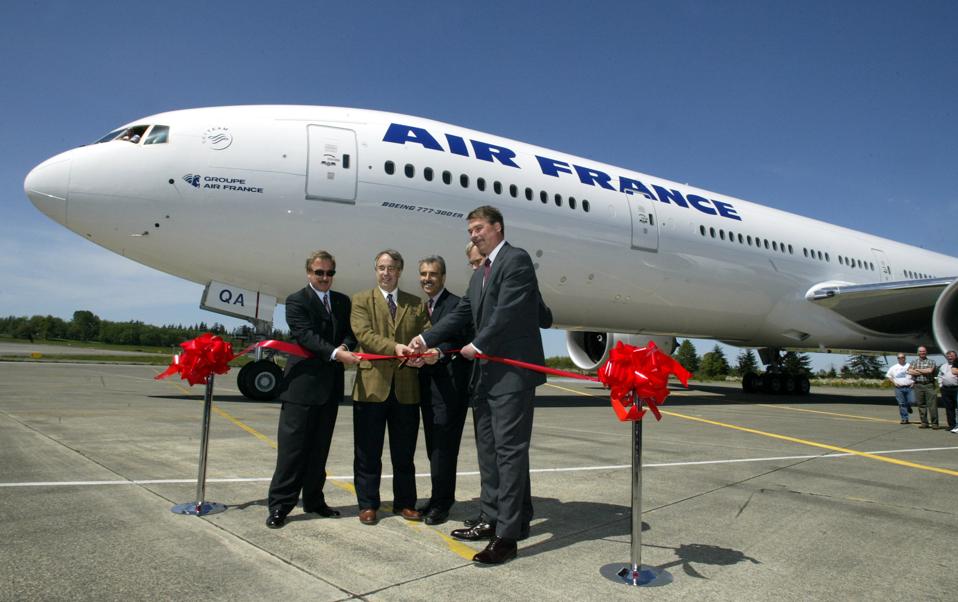 In addition to the 777-300ERs, the 747 Combis at KLM are temporarily being used for cargo since the Combi variant already has a dedicated freight compartment on the main deck, behind a shortened passenger cabin. Once the crisis subsides, KLM will retire the 747s.

Air France has dedicated all-freight aircraft, 777Fs. So too does Lufthansa with 777Fs and MD-11s, but Lufthansa still modified four A330s to remove seats to increase cargo space in the passenger cabin. Lufthansa’s sister Swiss may remove seats on three of its 777-300ERs.

IAG’s airlines, including British Airways, do not have dedicated freight aircraft.

British Airways in May plans to surpass last month’s 422 cargo-only flights, which carried over 2,000 tonnes of personal protective equipment, Walsh said. “We’re adapting where possible to fulfill the cargo demands that exist.” 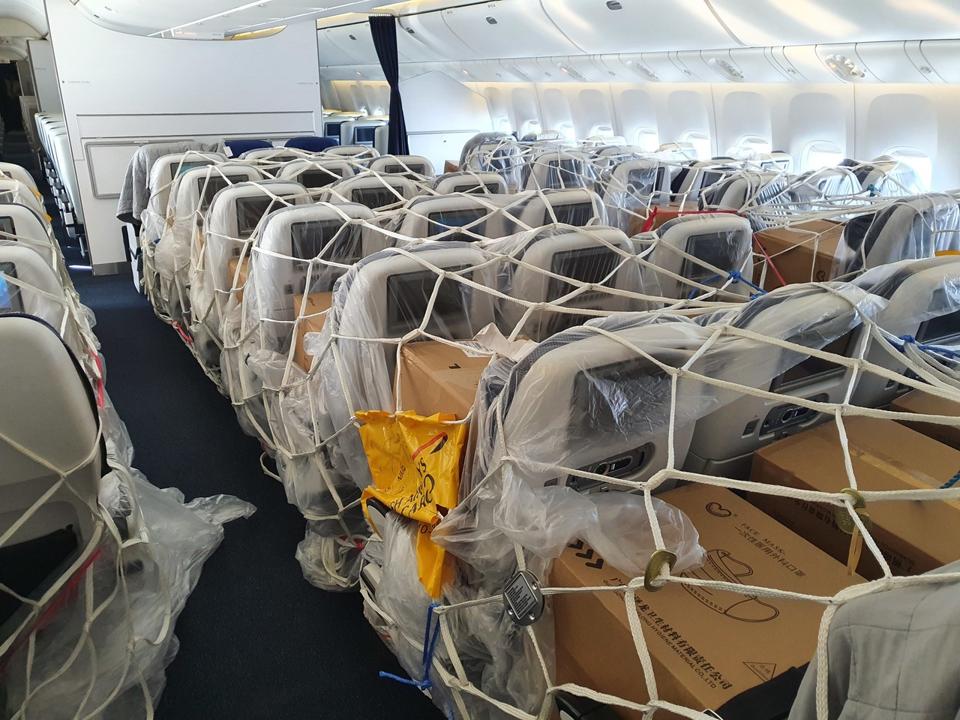 British Airways has been flying up to 21 cargo-only flights a week from China to the U.K. Other cargo-only destinations include Dubai, Johannesburg and Zurich.

Sister IAG carrier Aer Lingus has flown up to five daily flights between Beijing and Dublin on A330s with seats installed.

Aer Lingus’ sudden and large presence in China is notable given that Aer Lingus has had no recent operating experience anywhere east of Europe; its network is focused on Europe and North America.