Broadcast, Cable News Shows Should Realize That Children Are Watching 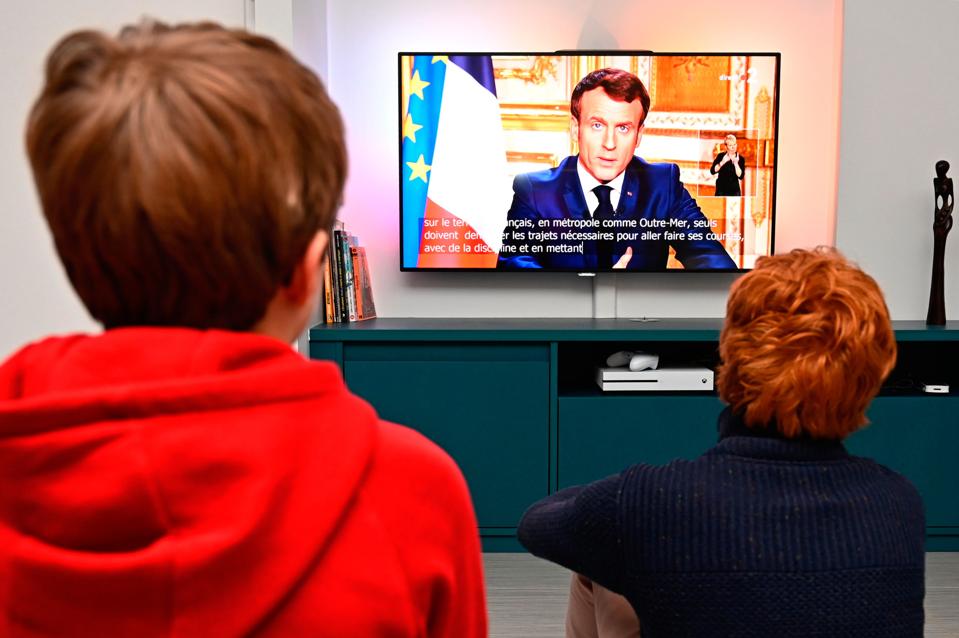 Children watch French President Emmanuel Macron in Rennes, western France, as he speaks from Paris … [+] during a televised address to the nation on the outbreak of COVID-19, caused by the novel coronavirus, on March 16, 2020. – The French president addresses the nation, with many expecting him to unveil more strict home confinement rules in a bid to prevent the virus from spreading. France has closed down all schools, theatres, cinemas and a range of shops, with only those selling food and other essential items allowed to remain open. The balance sheet of the epidemic climbed to 127 dead and 5,423 confirmed cases in France. (Photo by Damien Meyer / AFP) (Photo by DAMIEN MEYER/AFP via Getty Images)

All it took to get young people interested in the news was a worldwide pandemic that has killed more than 33,000 people and afflicted more than 700,000 others.

According to viewing data analyzed by Nielsen, viewership of local news by persons aged 2 to 17 rose 20 percent between early February and the week of March 9. The gain among adults aged 18 to 24 was 9.2 percent. Meanwhile, viewership among people aged 25 to 54, who TV news advertisers are targeting, jumped 10 percent.

“Non-adults have typically contributed very little to the profile of local news viewing,” Nielsen Vice President Justin LaPorte said in a press release.. ”In the week of March 9, however, when schools across the U.S. began. As a result, there was more viewing among non-adults.”

It stands to reason that the “non-adults” Nielsen refers to are boosting the viewership of both the network’s nightly news broadcasts and the cable news networks.  It also likely isn’t a phenomena that is restricted to the U.S. A spokesman for Nielsen couldn’t immediately be reached for comment.

According to the New York Times, the audience for ABC’s World News Tonight recently hit a level not seen since 2000, while viewership of NBC’s Nightly News is at heights not seen since 2005. The rising tide is even lifting The CBS Evening News, long a laggard in the ratings. Viewership of the broadcast recently averaged 7.6 million, a gain of 21 percent, the paper says.

Though many kids are watching the news because their parents are watching more news than they did before the pandemic struck, they are absorbing the information they hear like sponges. Like many adults, many are probably scared and confused about what they see on broadcast and cable networks and social media sites, as are many adults. They may not have any idea why ABC News, New York Times, CNN, and the Washington Post are more credible sources than some random guy ranting on YouTube.

They probably have many questions for which there are no easy answers, such as when life will get back to normal. If their parents or guardians don’t answer their queries, they may search for the information on their own, which could lead to all sorts of problems. The dismal state of the U.S. Civics education doesn’t help matters either. Surveys have found that most Americans can’t name all three branches of government or that the Constitution is the supreme law of the land.

The non-profit Common Sense Media has some useful tips on how to teach “media literacy” to kids of all ages, such as what is “bias” and how to spot “fake news.” You can find a link to the organization’s website here.  It also has useful parental ratings for parents concerned about whether a particular TV show or movie is appropriate for their children.

Though most parents assume that kids aren’t interested in the news, research from Common Sense Media indicates that many young people think that the media isn’t interested in them. A 2017 survey from the non-profit found that nearly 70 percent of respondents felt that the news media had no idea about the struggles facing kids their age. Almost 75 percent said they wished that news shows featured more kids their age rather than adults talking about them.

How Should Brands Speak To Consumers During The COVID-19 Pandemic?

The ROI Of Compliance

How Mindfulness Can Shape Company Culture