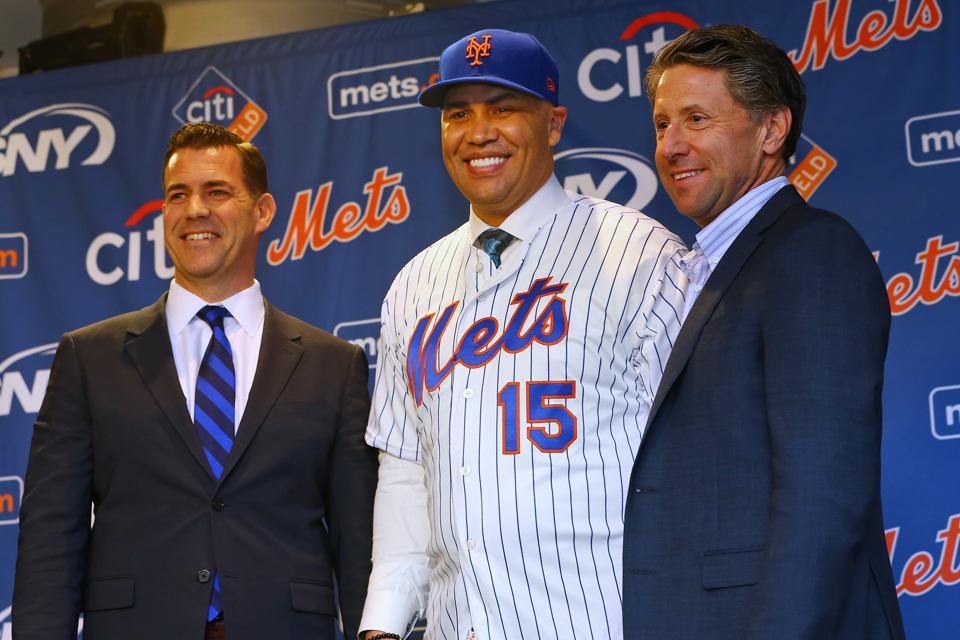 For a blissful few minutes Monday afternoon, it appeared the Mets had dodged disaster.

The news of AJ Hinch’s season-long suspension from Major League Baseball for his inability to put a stop to the sign-stealing escapades of the 2017-18 Astros served as a reminder of last October, when there was considerable buzz Hinch was the “bombshell candidate” for the Mets’ managerial vacancy and that general manager Brodie Van Wagenen — Hinch’s close friend, former college teammate and former agent — was waiting for the Astros to complete postseason play before making a splashy blockbuster trade for the Houston skipper.

Of course, that would have been terrible for the Mets, who would have been looking for a manager following Hinch’s suspension. But they didn’t have to worry about anything because on Nov. 4, they hired Carlos Beltran…who played for the Astros…under Hinch…in 2017…

As it turned out, the Mets could only breathe easy Monday for however long it took to read the nine-page report authored by commissioner Rob Manfred, whose findings implicated by name exactly one player from the 2017-18 Astros: Carlos Beltran.

And now we are entering Day 3: Mets Hold Selves Hostage.

Beltran remained the Mets manager as Wednesday night bled into Thursday morning, but with each passing moment in which the Mets remain silent on his fate, it becomes harder to envision Opening Day arriving with Beltran managing in the home dugout at Citi Field.

This weird purgatory could have been avoided with some assertive behavior by ownership. A firm “he’s in” or “he’s out” statement on Monday or Tuesday and this is…not over with, but at least there’s the perception the Mets are controlling the optics of the situation.

Of course, when have the Mets ever controlled the optics of the situation? And the fact Wilpons can’t make a firm decision about Beltran’s fate seems appropriate considering ownership hired him as manager despite spending most of Beltran’s six-plus seasons in New York arguing with and trying to diminish the player.

Whether or not the Astros’ sign-stealing scandal costs Beltran his job, it has already, for the second time this week, made relevant a seemingly routine months-old press conference.

In real time back on Nov. 4, the parlor games for Van Wagenen’s opening statement involved wondering how long the blusterous general manager would ramble on — seven minutes and 45 seconds, per New York Post columnist Joel Sherman — and which managers or managerial candidates he was disparaging with his verbosity.

When Van Wagenen spoke of how Beltran meant ownership and the baseball operations department “…could exhale when we walked into the manager’s office,” was he knocking Joe Girardi, the most popular candidate amongst the fanbase but someone who was unlikely to work under such a hands-on administration?

When Van Wagenen said Beltran is “…a learner,” praised him as someone who “… knows what he doesn’t know, and he’s willing to acknowledge it” and possesses “…a curiosity to learn more and to grow,” was he mocking former manager Mickey Callaway, whose learning curve as a first-time manager was steep and never-ending?

As it turns out, none of that matters today (if it ever mattered at all), because of what Van Wagenen had to say about why he and the Wilpons decided to hire Beltran. Van Wagenen said there were five reasons why Beltran won the Mets over, the second of which was “Carlos is trustworthy.”

“Carlos is committed to beating his opponent. Why do I say that and why do I make that a point? Everybody wants to win, there’s no doubt about that. Most coaches show up everyday with the belief that they can try to get the best out of their players. Carlos has those two attributes. But he also takes it a step further. Carlos wants to beat his opponent. He looks at the little things. He looks for tips. He looks for any sort of weaknesses that he can exploit in his game planning. He did it as a player and we know that’s going to be a key part of his success as a manager.”

Back then, those just seemed like the ingredients to another Van Wagenen word salad. Now, they look like the candlestick, the dagger, the lead pipe, the revolver, the rope and the wrench all sitting on a table next to a blood-stained Beltran in the conservatory.

It also makes it pretty clear Van Wagenen and the Mets had a good idea of Beltran’s ability to, at the very least, stray into the gray areas in terms of searching for a competitive advantage. As noted earlier, Van Wagenen and Hinch have been best friends for decades. Are we really to believe the topic of Beltran’s ability to engage in espionage didn’t come up during the vetting process and work in his favor?

This, of course, leads to another lesson we learned yet again Monday: It’s always easier for owners, upon being shocked to discover cheating is going on here, to fire the people they hired than it is to expect owners to be punished for putting such people in positions of authority in the first place and/or not knowing (wink wink) such underhanded dealings were taking place.

It’s still possible Beltran is safe if he was as truthful with the Mets once the details of the Astros’ cheating began leaking out in mid-November as he apparently was with Manfred. But the longer this goes, the more it feels like the Mets — forever prone to making decisions based on whichever direction they seem to think the winds of public perception are blowing — are going to decide it’s easier to make him the fall guy before he even manages a game for the team, which would be a remarkably Mets thing to happen even for the Mets.

“We can trust Carlos, and that goes a long way,” Van Wagenen said 73 days ago. Perhaps today we find out just how long that goes.

How Coronavirus May Affect Home And Renter Insurance