Breaking
Growing Your Retirement Money Using 401(k) Dollar-Cost Averaging
Wellness Exec Abby Miller Levy Partners With Venture...
Microsoft Teams Issues Strike To Zoom With Tidal...
What’s Coming For The S&P 500 In October
4 Ways You Can Showcase Empathy With Your...
A $22,000 Microsoft Surface Will Soon Be For...
Zooming In – Should SMEs Invest In The...
iOS 14: The Surprising Security Risk Of Sharing...
How A Break From Lord Sugar Changed The...
Sunday’s Google Doodle Is Actually About Google
Office Of The Comptroller Of The Currency Chief...
Source Code For Multiple Windows Operating Systems Publicly...
Why Forgettable Pfizer Really Is A Great Value...
Hot For The Holidays? Amazon Home Drone, Kid...
Best Small Business Loans
The FAAMG Stocks Drive The Markets
Home Business Bruins Will Eat Words If Playoffs Don’t Bring Out Their Best
Business 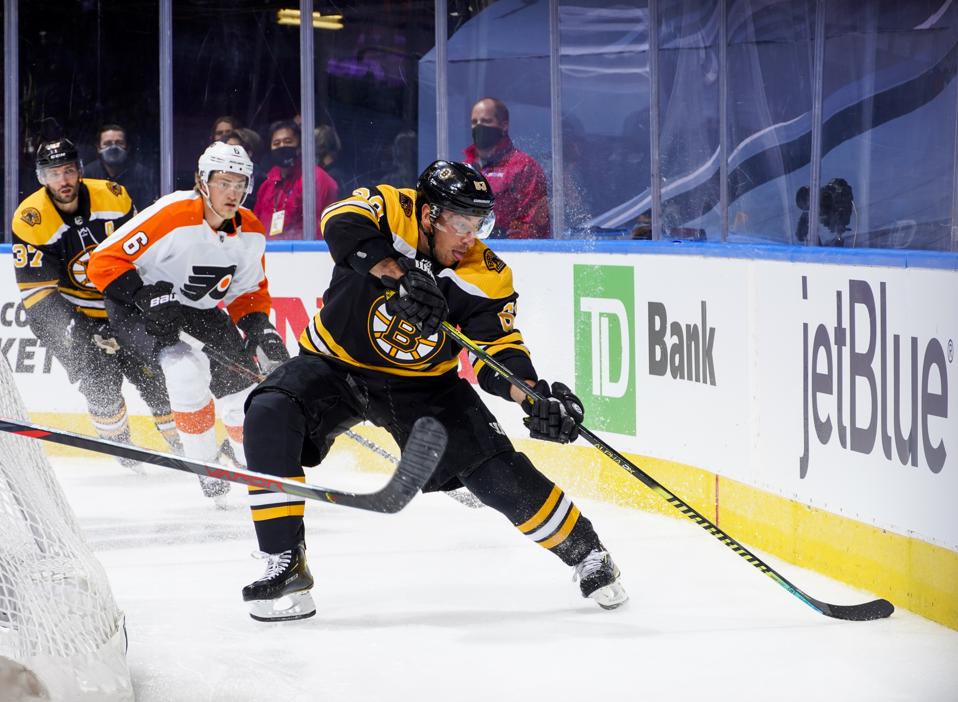 Brad Marchand and the Boston Bruins will attempt to prove their round-robin performances were … [+] meaningless when they begin the Stanley Cup playoffs against the Carolina Hurricanes. (Photo by Mark Blinch/NHLI via Getty Images)

None of the Boston Bruins players who’ve been interrogated since they finished round-robin play without a win in three games at the Eastern Conference hub in Toronto has been brash enough to call the team’s shot against the Carolina Hurricanes prior to their best-of-7 first-round series that begins Tuesday.

But make no mistake, the Bruins are still being boastful when they downplay the value of their losses to the Tampa Bay Lightning, Washington Capitals and Philadelphia Flyers and look ahead to the Hurricanes as though they have no cares in the world.

After center David Krejci characterized the round-robin games as “kind of like playoff hockey” and goalie Tuukka Rask refereed the first-round games as “real hockey,” forward Brad Marchand was the latest Bruins player to sound like a dumped suitor claiming he never really wanted to date a supermodel anyway.

“You know those are preseason games,” Marchand said Monday. “I mean let’s call it what it is, they’re exhibition games for the playoffs and we weren’t in the same position in the same position as other teams and it’s hard to have the same mentality as a playoff series. So we’re not going to base our performance of what it’s going be against Carolina on that.”

Just when it seemed the stakes for the defending Eastern champion and Presidents’ Trophy winner couldn’t get any higher in the Stanley Cup playoffs, now the Bruins have to back up their dismissive words by playing like the team that earned 100 points before the pandemic pause.

Marchand and his teammates might be right about the value of the round-robin games, but one has to wonder what the Bruins would be saying had they gone 3-0 or 2-1. Certainly no other teams were denigrating those games, and the NHL created them as a favor to the top four teams in each conference from the regular season to have an incentive to get ready while their first-round opponents were playing best-of-5 playoff series, complete with the desperation that comes with elimination games.

The intensity in all the round-robin games was down a notch from the qualifying round games, but Philadelphia and Vegas thrived, and all the teams used the time to tune up. The Bruins didn’t start to resemble a contending team until the second half of the Tampa Bay and Washington games, and even when they performed well they were still below the standard they’ve set the past couple years.

Marchand’s line with Patrice Bergeron and David Pastrnak combined for one assist in the three round-robin games. Maybe the sight of the Hurricanes will revitalize them.

Ondrej Kase looked alright in his return game Sunday, but there’s no telling how long it’ll take him to get up to full speed and how well he’ll mesh with teammates he’s hardly played with since coming over in a trade with Anaheim.

Coach Bruce Cassidy says the power play is a “work in progress,” which is odd considering the Bruins were No. 2 in efficiency during the season and have had their top unit together for multiple seasons.

Rask has looked fine in goal, but he’s been “unfit” for a couple practices, so there’s no telling what he’s going through. The defense corps improved from the Lightning game to the Capitals game but still lost battles and races that once would’ve gone in Boston’s favor.

There are a lot of kinks to work out, many of which should’ve been solidified in the round robin even if they didn’t help the Bruins earn a standings point or two. Instead the Bruins are going into the playoffs with multiple question marks hanging over them, the type of question marks that would really make them look doubtful for a long run were it not for their track record of being able to overcome adversity since Cassidy took over the bench.

In the Truman Show setup that is the 2020 NHL postseason, there’s no way to tell what’s going in the dressing room or around the team. All we get are the laid-back Zoom sessions. So it’ll take the next few days to find out if the Bruins just bluffed the house during the first week in the bubble or if they tragically took too lax an approach to their return to play.

Without coming out and guaranteeing victory they’ve guaranteed that they’ll be eating their words for years to come if the start of the traditional playoffs doesn’t inspire a coming out party for their best play.

What Trump’s Executive Order Could Mean For Your Student Loans