BTS’s Surprise ‘Black Swan’ Video Will Give ‘Map Of The Soul: 7’ A Healthy Second-Week Chart Boost 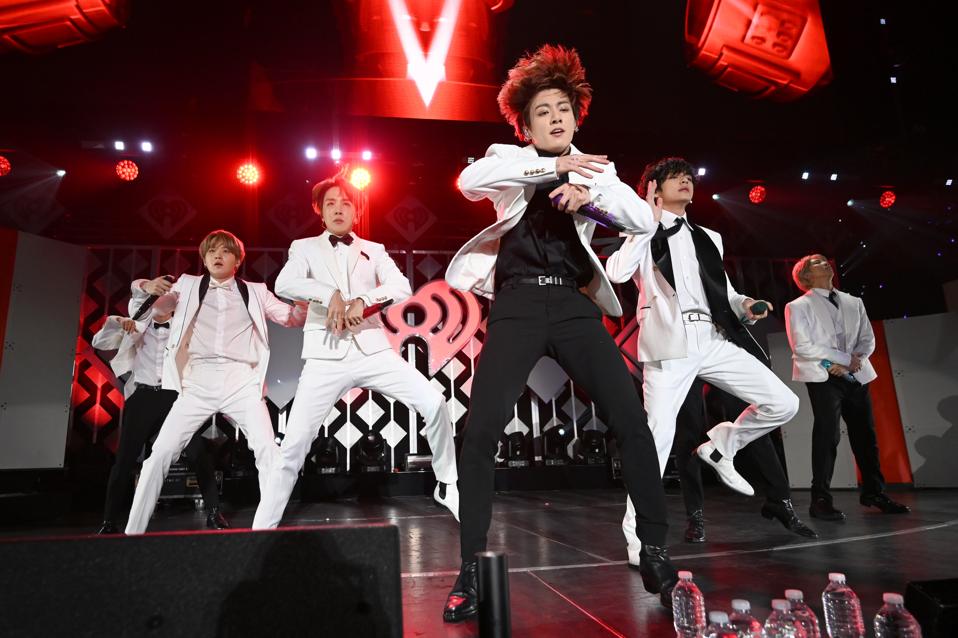 INGLEWOOD, CALIFORNIA – DECEMBER 06: (EDITORIAL USE ONLY. NO COMMERCIAL USE.) (L-R) Jin, Suga, … [+] J-Hope, Jungkook, V, Jimin, and RM of BTS perform onstage during 102.7 KIIS FM’s Jingle Ball 2019 Presented by Capital One at the Forum on December 6, 2019 in Los Angeles, California. (Photo by Kevin Mazur/Getty Images for iHeartMedia)

Lest anybody start to consider BTS’s stratospheric success predictable, the Korean pop septet just surprise-released a new, official music video for “Black Swan,” the first single off their chart-topping new album, Map of the Soul: 7. This marks BTS’s third music video in less than two weeks, but the group’s fan base shows no signs of fatigue: “Black Swan” has earned nearly 6 million views in just a few hours, and #BlackSwan is the biggest global hashtag on Twitter, approaching 1 million tweets.

“Black Swan” debuted and peaked at No. 57 on the Billboard Hot 100 in January before dropping off the chart in its second week. With only two days left in this week’s tracking frame, it’s unlikely the new video will be enough to lift “Black Swan” back onto the Hot 100. But it serves another important role for BTS: boosting the week-two sales of Map of the Soul: 7.

BTS’s new album debuted at No. 1 on the Billboard 200 this week with a whopping 422,000 album-equivalent units, the biggest debut of 2020 and the group’s biggest sales week ever. That haul included 347,000 traditional album sales and 26,000 track-equivalent albums, derived from individual song downloads. Map of the Soul’s robust physical sales are due largely in part to four collectible CD editions, which accounted for 330,000 copies, Billboard reports. It’s a testament to BTS’s large, passionate fan base, but it will also likely result in front-loaded sales, as fans turned out en masse to buy Map of the Soul: 7 in its first week of availability.

Without exceptional streaming numbers to sustain it, Map of the Soul: 7 will fall fairly hard in its second week, which is par for the course for blockbuster pop albums. According to HITS Daily Double, the group is on track to move 80,000-90,000 units this week, which would cement a third-place finish on the Billboard 200 behind new albums from Lil Baby and Bad Bunny. That would give BTS their best second week sales to date, but it would still be a roughly 80% dip in overall activity.

That number does not account for the new “Black Swan” video, however. BTS may not rack up Spotify streams on the level of Drake, Post Malone or Roddy Ricch, but when it comes to YouTube, they are unmatched. BTS’s “Boy with Luv” holds the record for the biggest 24-hour debut in YouTube history, while three of their other videos—including last week’s back-to-back videos for MOTS: 7 single “ON”—are in the Top 20. “Black Swan” probably won’t approach that level of success, but it could still debut somewhere in the 20 million ballpark, a threshold that Taylor Swift’s “The Man” video took several days to cross.

That’s great news for BTS, because as of January, Billboard now factors YouTube video and audio into the Billboard 200 chart. YouTube is by far BTS’s strongest streaming platform, and over the next two days, the group will earn tens of millions of additional video views thanks to “Black Swan.” The timing is smart, too: “Black Swan” views over the next two days will give Map of the Soul: 7 a second-week boost on the Billboard 200, while additional views from Friday onward—of which there will be plenty—will factor into the album’s third-week sales.

BTS have become one of the biggest cultural phenomena and bestselling pop artists in the world, but their methods for success don’t always mirror their contemporaries. While many chart-topping artists rely on music streaming services and ticket/merchandise bundles to drive up album sales, BTS thrive on physical CD sales and music video views. The group has a big enough global fandom and star power to smash sales records, as demonstrated on Map of the Soul: 7. But with average Spotify streams and little U.S. radio play, their next challenge will be sustaining those robust sales for several weeks in a row.

Thankfully, BTS are one of the few artists that can count on their fans to excitedly consume anything they release, so they’re able to fully capitalize on the element of surprise with the new “Black Swan” video. Crafting multiple lavish music videos in the name of album promotion seems like the path of most resistance, but BTS are up to the challenge, and their fans are ready to support them. When this week’s Billboard 200 gets finalized, expect to see that support reflected in Map of the Soul: 7’s second-week sales.

How To Enhance The Customer Experience Using AI...

Why The Pentagon Is Warning US Military Not...

An Insider’s Guide to Finding the Right Advertising...