Breaking
A Technology Solution For Muni Bond Disclosure
Five Common Ways To Fund A Small Business...
Your Floss Pick Habit Is Killing The Planet,...
Customer Service Recovery: Six Keys To Turn Complaints...
How Becoming A Learning Organization Is Key To...
IRS Increases Enforcement On Cryptocurrency: What This Means...
Optimus Prime Finally Gets The Diaclone Update He...
No, There Isn’t A Black Hole At The...
The Fed Could Be Repeating This Key Mistake...
Japanese Lawmaker Becomes Billionaire By Selling E-Signature Services...
Communication Lessons From The Presidential Debate
4 Tips For Attracting Your First ‘Dream Client’...
Want To Generate More Sales This Holiday Season?...
Your ‘Harvest Moon’ Moment Is An Illusion: Why...
Launching A Startup Comes Down To Making A...
Google Meet’s Unlimited Calling Will Continue To Be...
Home Business Building An MLS Power? Get Moving On Those Green Card Applications
Business

Building An MLS Power? Get Moving On Those Green Card Applications 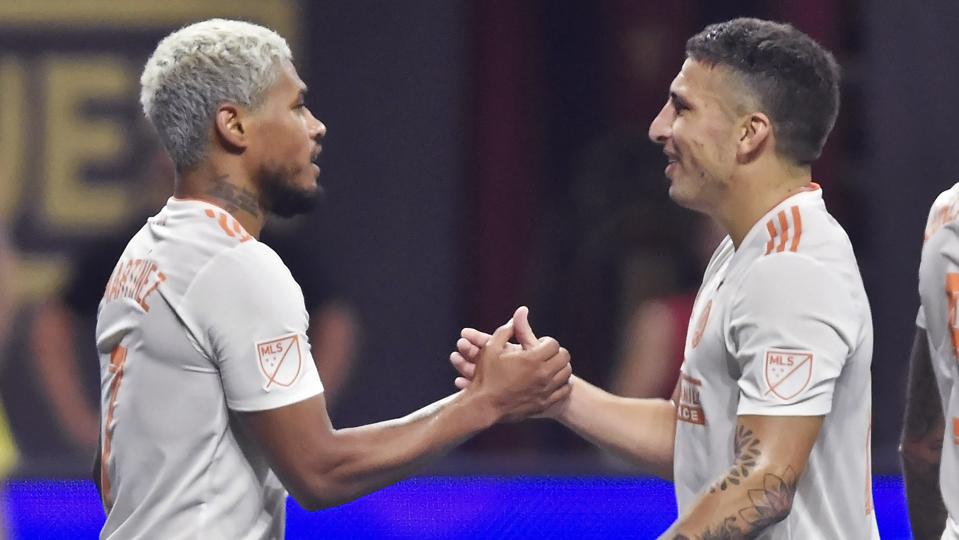 Josef Martinez, left, and Eric Remedi are two South-American born players and key contributors on … [+] Atlanta United’s roster. They are also both holders of a U.S. green card, which means neither player counts toward the league’s international player roster quota.

The January silly season is known throughout the soccer world for rampant speculation on which players could be making major-impact transfers to join new teams, and MLS is no different.

But amid the anticipation of Chicharito’s arrival at the LA Galaxy and the hype surrounding Alan Pulido’s completed move to Sporing Kansas City, Atlanta United and FC Cincinnati this month made a different kind of roster move this January that may be just as important for their clubs’ futures: Combined, five of their foreign-born players were recipients of green cards, making them permanent U.S. residents.

“Wait — what on earth does that have to do with building an MLS contender?” you might say.

In a word: everything.

A look at Atlanta United’s roster — past and present — shows how important attaining those can be when trying to build a championship-caliber team. Of the club’s 22 players currently under contract, according to the team website, 13 are born outside the United States. But with last week’s news that Ezequiel Barco, Franco Escobar and Eric Remedi had obtained green cards, five of those 13 are now U.S. permanent residents. (Additionally, Irishman Jon Gallagher is out on loan and Angolan-born Lagos Kunga was signed directly from the club’s academy, meaning neither count toward the international quota for the time being.)

A look at Atlanta United’s heady achievements during their three seasons suggests this certainly helps the club gain a competitive advantage: They are the only team to finish in the top three in the Supporters’ Shield standings in all three of those seasons, and their 182 points earned is the highest of any team over that stretch. Not to mention their 2018 MLS Cup and 2019 U.S. Open Cup victories.

Here’s the thing, though. While we don’t know exactly what a new MLS CBA will hold in terms of roster regulations, finding extra room for international players is only going to become more important, for a simple reason: The league is expanding more rapidly than the domestic player pool.

For example, when Atlanta joined the league, it was one of 22 MLS clubs. That means a maximum of 660 players could be signed to MLS rosters at the time. And if every team chose to fill its 30-man roster, a total of 484 players would have to qualify as domestic players.

Fast forward to 2022, when there will be 30 teams in MLS. If 900 roster spots are all filled, at least 660 of those will have to be considered domestic players. That’s an increase of 176 American and Canadian players. And as many resources as MLS teams are pouring into their youth academies compared to their earlier days, there just aren’t 176 extra MLS-caliber American and Canadian players waiting around on USL rosters or in Europe looking for a move back home.

But in the global market, the MLS-level talent pool is almost infinite — which no doubt is a major reason MLS feels more comfortable with its era of rapid expansion over the last 15 years than another American sports league might. The better teams get at turning some of those international acquisitions into green card holders, the easier it is to build a competitive and deep roster, and shrink the gap in quality between the best player on a 30-man squad and the worst.

Atlanta United may lean heaviest on the green card application process, which as SBNation site DirtySouth Soccer details, is by no means a slam dunk. But almost every team tries to some degree. The Portland Timbers and New York City FC have also been relatively active in this arena, in particular. And FC Cincinnati’s revelation this week that Allan Cruz and Mathieu Deplagne received green cards in just the club’s second season sure suggests they will also be active.

Obtaining green cards is not the most cost-effective way to improve roster depth. All things being equal, the cheapest high-quality talent in the league is usually developed from within club academies. Just check out what the Philadelphia Union, FC Dallas and Real Salt Lake have done over the years. That said, securing permanent residency for players is probably the lowest risk strategy in terms of player quality. And as the league continues to grow, that’s going to be true for some time.

Global Political Risk is Forecast to Fall in 2020