Home Finance Bullishness Increases But Did Some Bulls Buy Too High?
Finance 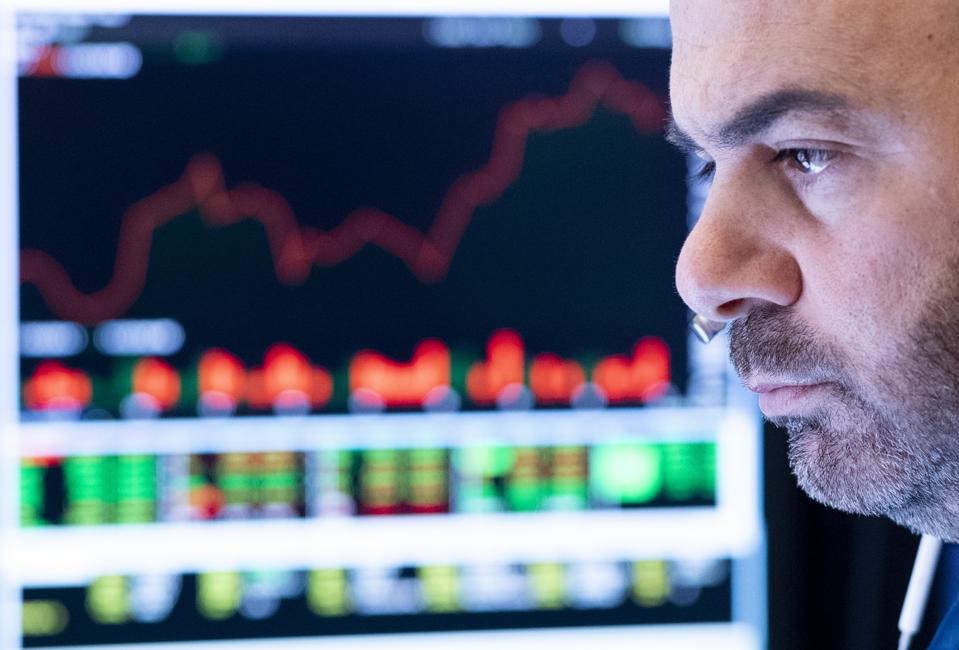 The stock market was hit with selling early Thursday. Within the first hour of trading, there were three times more declining stocks than advancing stocks. That was the strongest selling that we have seen so far in 2020.

But the market rebounded nicely: the S&P 500 had an early low of 3301, but after a test of the lows, it moved upward to close the day higher. The NYSE A/D numbers also closed barely positive. The action Friday was not nearly as positive, as the S&P 500 opened eight points higher at 3333, before the sellers took over. The S&P closed at 3295. 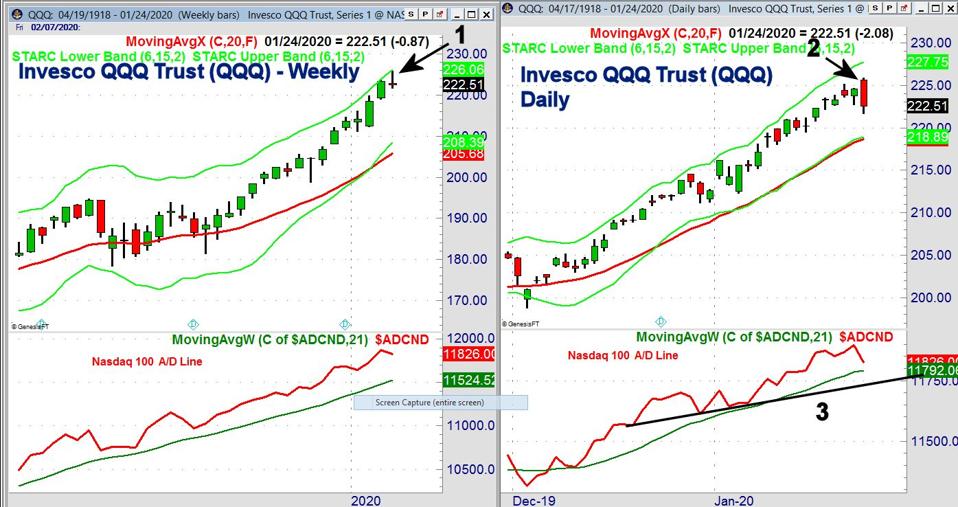 The Invesco QQQ Trust (QQQ), which tracks the Nasdaq 100, had a high last week of $225.88. which was well above the weekly starc+ band at $223.85. The QQQ also closed about where it opened on Tuesday, therefore, forming a doji (point 1), which is a sign of indecision. A close this Friday below the doji low of $221.67 will trigger a weekly doji sell signal. The QQQ has major support at $205.68 and the rising 20-week Exponential Moving Average (EMA). The weekly Nasdaq 100 A/D line made a new high a week ago, which is a positive sign for the intermediate-term trend.

The daily chart shows the daily reversal that occurred on Friday, when after reaching a new high, QQQ closed lower (point 2). There is daily chart support now in the $218.50-$220 area. The daily Nasdaq 100 A/D line made a new high last Thursday before turning lower on Friday. It has next support at its Weighted Moving Average (WMA) and then at the uptrend (line 3).

While the QQQ’s decline was not that severe, its technical developments are worth further examination in light of last week’s survey from the American Association of Individual Investors (AAII). The AAII reported that the percentage of bullish investors (Bullish %) rose another 3.8 points last week to 45.6%.

This is the highest reading since October 4, 2018, when it came in at 45.88%. As I mentioned last week, high Bullish % readings can often mean there are fewer investors left to buy, as they are already fully invested.

For the week, only three sectors were higher, led again by the Dow Jones Utilities (XLU) up 2.4%, followed by 1.0% gain in the Real Estate Sector Fund (XLRE) and a 0.32% rise in the Technology Sector (XLK). 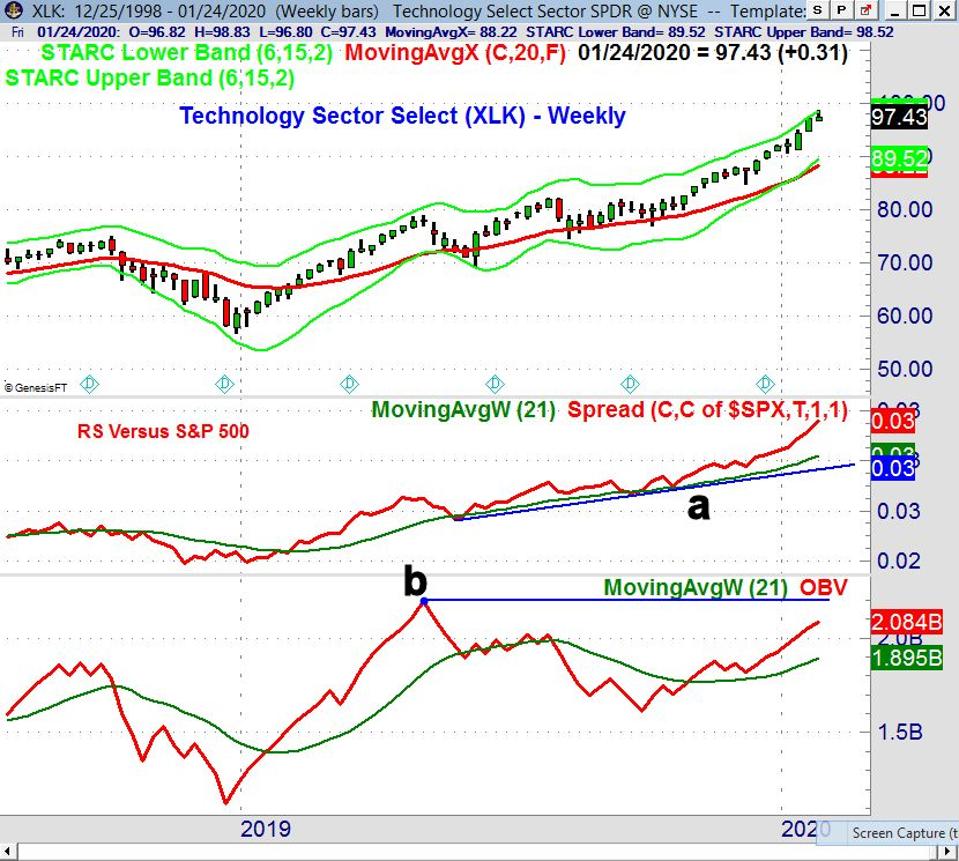 XLK moved above its weekly starc+ band for the third week in a row, and then closed the week near the lows as it dropped 0.47% on Friday. The rising 20-week EMA is good support, now at $88.22. The weekly relative performance (RS) made further new highs last week, consistent with a market leader. The RS is well above its WMA and uptrend (line a). The weekly on balance volume (OBV) is above its WMA, but below the early 2019 high (line b), and as such has not confirmed the new price highs. 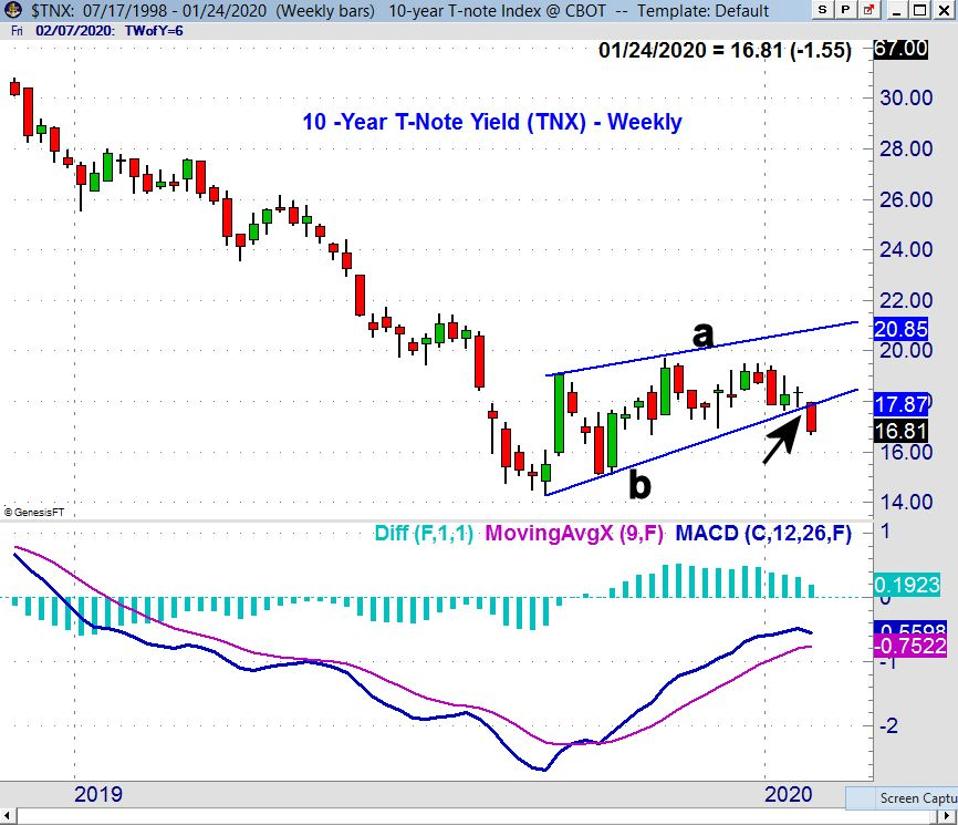 The other significant development last week was in the bond market. The 10-Year T-Note yield closed sharply lower at 1.681%. This decline completed the weekly continuation pattern (lines a and b). It has been my view since last fall that the rebound in yields from the August 2018 low was just a pause in the longer-term downtrend.

The break of support (line b) completes the flag formation (lines a and b) which has downside targets in the 1.35-1.40% area. The weekly Moving Average Convergence-Divergence (MACD) lines are now declining, but are still positive. The daily MACD lines have confirmed the drop in yields last week.

This coming week is the busiest in the earnings season, with Apple (AAPL), Microsoft (MSFT), Facebook (FB), and Amazon (AMZN) just some of the widely held stocks to report results this week. A sharp decline in one of these key stocks, especially Apple, could add downward pressure on the stock market.

In addition, there is a full economic calendar this week, including the FOMC meeting that starts Tuesday. Some of the key reports I will be watching are Consumer Confidence on Tuesday, and Thursday’s GDP report. Then on Friday, we get the Chicago PMI and Consumer Sentiment.

The Bitcoin Price Has Outperformed All Other Major...

What To Consider Before Moving A Parent Into...