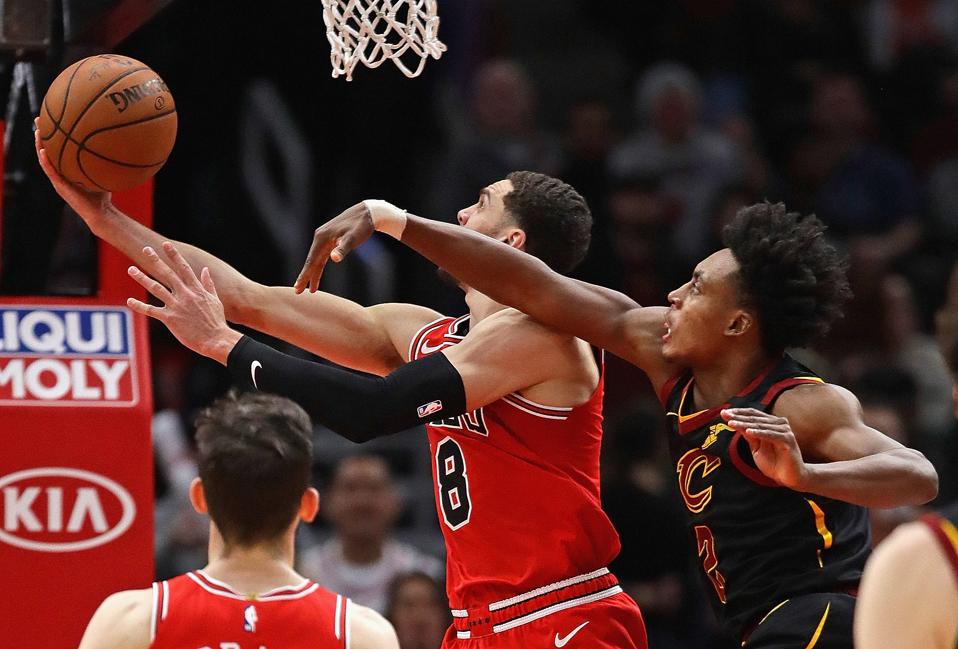 CHICAGO, ILLINOIS – JANUARY 18: Zach LaVine #8 of the Chicago Bulls shoots the game-winning shot and … [+] is fouled by Collin Sexton #2 of the Cleveland Cavaliers at the United Center on January 18, 2020 in Chicago, Illinois. The Bulls defeated the Cavaliers 118-116. NOTE TO USER: User expressly acknowledges and agrees that, by downloading and or using this photograph, User is consenting to the terms and conditions of the Getty Images License Agreement. (Photo by Jonathan Daniel/Getty Images)

A sluggish start to the 2019-20 season for Zach LaVine and the Chicago Bulls had his All-Star chances looking nonexistent. LaVine hit a low point when he was yanked early in a loss to the Miami Heat on Nov. 22. The very next night, though, LaVine went for a career-high 49 points and 13 3-pointers, including the game-winner in a thrilling comeback against the Charlotte Hornets. That was effectively the beginning of his All-Star push, and the shooting guard is scoring at a career-best level in January as he tries to earn a spot in February’s NBA All-Star Game in Chicago.

LaVine’s latest heroics featured him dropping 42 points in a 118-116 win over the Cleveland Cavaliers on Saturday night. 21 of those 42 points came in the fourth quarter as the Bulls finished off a comeback from 19 points down late in the third quarter. The 24-year-old shot a scorching 19-of-31 from the field, and he also racked up six rebounds, five steals, three assists and two blocks in his terrific performance:

LaVine has rescued the Bulls on a number of occasions with his shotmaking, and the team’s offense goes in the tank when he’s not on the court. While LaVine’s defense is still a minus overall and Chicago is worse defensively with him on the floor, he has improved on that end. It’s hard to imagine just how bad the Bulls would be without his scoring binges.

When it comes to All-Star voting, LaVine is sixth among Eastern Conference guards after third returns, with fan voting coming to a close on Monday. Trae Young, Kyrie Irving, Kemba Walker, Derrick Rose and Kyle Lowry are ahead of LaVine, with Jaylen Brown, Ben Simmons and Bradley Beal behind him.

In the frontcourt, Giannis Antetokounmpo is dominating the voting in the East, with Pascal Siakam and Joel Embiid in a battle for the No. 2 spot. Jimmy Butler and Jayson Tatum round out the top five, and all five of these players are likely locks to make the game. Bam Adebayo and Domantas Sabonis are also All-Star candidates.

Khris Middleton and Malcolm Brogdon are nowhere to be found in the fan voting, but they’ll be given consideration given their respective teams’ records. The Milwaukee Bucks are a ridiculous 38-6 on the season, while the Indiana Pacers are 27-15 entering play Sunday despite no Victor Oladipo. Spencer Dinwiddie may also consideration for playing so well without Kyrie Irving for a while.

So many quality candidates could leave LaVine on the outside looking in. While his prolific scoring looks good on paper, NBA coaches may choose to prioritize players making a big impact on winning teams when picking the All-Star reserves. Not only are the Bulls just 16-28 on the season, but they’re 1-17 against teams with a record above .500. LaVine has had his share of duds against quality competition, so failing to lead Chicago to meaningful wins will be a strike against him.

Young, Irving, Beal, Rose and Dinwiddie are all on bad teams as well, but the Atlanta Hawks point guard is posting monstrous averages of 28.8 points, 8.5 assists and 4.6 rebounds while shooting 44.5% overall and 37.4% from 3-land. Young also has the strength of the fan voting behind him, so he’s looking like a lock. Irving isn’t deserving given he has only played 15 games, but he’s also getting a lot of love from the fans. The fans only account for 50% of the vote to determine the starters, though, so that might not be enough to get him in. Dinwiddie’s below-average efficiency and the Brooklyn Nets’ recent slide will hurt his own case.

Beal is posting impressive averages of 27.2 points, 6.4 assists and 4.6 rebounds, but his efficiency has taken a dip without John Wall playing next to him. The Washington Wizards are even worse than the Bulls at 13-28, and LaVine has outplayed Beal in two Chicago wins so far this season. There’s also drama going on in Washington after Beal ripped the team’s culture. Beal may have the big numbers and the track record, but there’s an argument for LaVine here.

Rose is having his best season since before his torn ACL in 2012, but he has mostly come off the bench and doesn’t have the raw numbers of LaVine. Coaches may look to reward Rose with the game in his hometown of Chicago, but LaVine is having a better season.

So, again, this may really come down to LaVine having to beat out players on good teams like Adebayo, Brown, Brogdon, Sabonis, Middleton and Lowry. LaVine has built himself a nice case, but it still might not be enough even with the game in Chicago.

If LaVine does make the All-Star Game, there might be a better chance of him participating in All-Star Weekend’s other big events. He has said he would like to become the first player ever to be both a Slam Dunk Contest champion and 3-Point Contest champion, so a spot in the latter event sounds likely. Perhaps he’ll wind up doing both and put on a show for the home fans at the United Center.

Apple Acquires Xnor.ai To Bolster AI At The Edge

Three Things Small Businesses Should Do To Get...

Ask Ethan: Can Black Holes Ever Spit Anything...