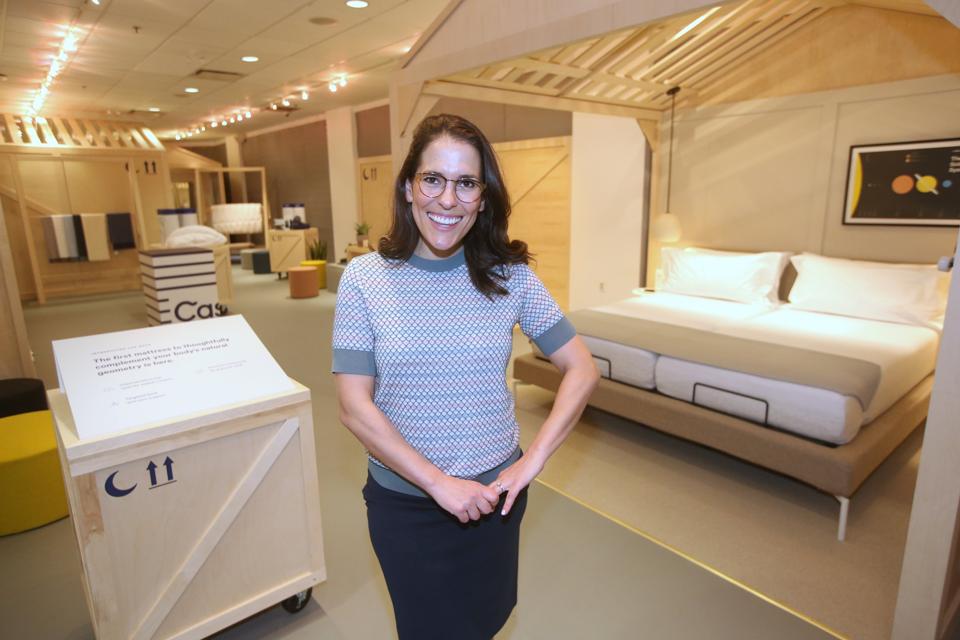 TORONTO, ON – MAY 11: Casper Sleep Shop owner Nicole Tapscott poses for pictures in her shop at … [+] Sherway Gardens in Etobicoke. (Vince Talotta/Toronto Star via Getty Images)

If you want to sleep at night, don’t buy stock in mattress marketer, Casper Sleep. (I have no financial interest in the securities mentioned in this post).

Burning through cash to grow fast in a big market has been out of fashion ever since last November when WeWork’s IPO busted and its private market value plummeted from $47 billion to $7.5 billion between last January and November.

Casper is far smaller than WeWork but it is suffering from some common woes facing startups that followed the previous venture capital mindset: double revenue every year until you get big enough to provide VCs a 10x-exit — at which point the money-burning business model used to get there becomes the problem of IPO investors.

Casper seems to have no choice but to try the IPO market to fund its losses. Casper has raised a whopping $300 million and is valued at $1.1 billion according to the Wall Street Journal. Sadly, it lost $67 million on $312 million of revenue and has a mere $55 million in cash.

The private markets will not funnel more into Casper — the Journal noted that Casper “sought additional private funding late last year [that was never finalized], according to people familiar with the matter.”

I see three reasons not to touch this one with a ten foot pole.

The mattress industry is large but growing very slowly. Industry revenue grew at moribund 0.3% annual rate between 2014 and 2019 to to $9.2 billion and by 2024, it’s expected to grow slightly to $9.4 billion, according to IBISWorld.

Rivalry is intense with three companies dominating the industry. Serta Simmons controls 32.5% of the market, Temper Sealy’s share is 26.3%, and Sleep Number is in third place with 5.5% of the market, according to IBISWorld.

Sadly for Casper, its suppliers of foam mattresses are not exclusive. It faces direct rivals including Purple Innovation — it went public, turned a profit and is growing faster than Casper — and Leesa Sleep which have been bidding up the prices of online ads targeting millennials seeking mattresses. That raises marketing costs and makes it hard for Casper to make a profit.

Casper — which launched in 2014 — is growing much faster than the industry but can’t generate enough cash flow internally to sustain that growth. It has an appealing concept: deliver compressed foam beds direct to customers’ doors thereby “cutting out middlemen and drawing customers happy to avoid slogging to mattress stores,” noted the Journal.

Casper’s prospectus defines a new industry — dubbed the $432 billion “sleep economy” (add pillows, sheets and sleep-tracking devices) — which is growing at a 6.3% annual rate — making it much larger and faster-growing than the mattress industry outlined above.

Casper’s financial statements suggest that it’s growing faster than this but burning through cash in the process. Its revenues — net of refunds, returns, and discounts — were $312 million for the first nine months of 2019 — up 20% from the year before. For the period, Casper reported a $67 million net loss and burned through about $70 million in cash for operations and investing activities — leaving it with about $55 million in cash at the end of last September.

Recently such a financial profile has caused investors to turn their backs. As the Journal pointed out, in the last few weeks startups including “Oyo Hotels & Homes, delivery company Rappi and scooter company Lime” have been cutting costs and SoftBank has reversed its traditional guidance to startups — telling them that they must get profitable rather than pursue rapid growth.

Casper has pivoted away from the direct to consumer model in search of growth. It began opening stores in malls and strip malls and began selling through retailers such as Raymour & Flannigan. Amazon and Walmart are also getting into the mattress business and competing on price, according to the Journal.

Meanwhile, Casper has very high marketing costs of which I would include the cost of refunds, returns, and discounts it uses to encourage people to try its products — to the tune of almost $81 million during the first three quarters of 2019.

A large proportion of Casper’s mattresses are shipped to consumers — for a “100 nights risk-free” trial — and then returned. Michael Magnuson of GoodBed.com, estimated that “roughly 1 out of 8 Casper mattresses” are sent back which is typical for an online purchase. However, according to NPR, Magnuson said that “Unlike those shoes that you send back, this mattress that you’re not going to keep — will never be resold.”

Casper has plenty of marketing pizzazz. As NPR noted this includes “celebrity investors like rapper Nas and actor Leonardo DiCaprio; punny ads on podcasts, websites and the New York subway, and $25 45-minute naps at New York’s ‘The Dreamery.’”

Casper is unlikely to make a profit on all this nifty sounding marketing. Avoid buying stock in this burning bed.

What Does Pre-Med Or Pre-Law Look Like For Entrepreneurship?

Coronavirus COVID-19 Will Go Down In History As...