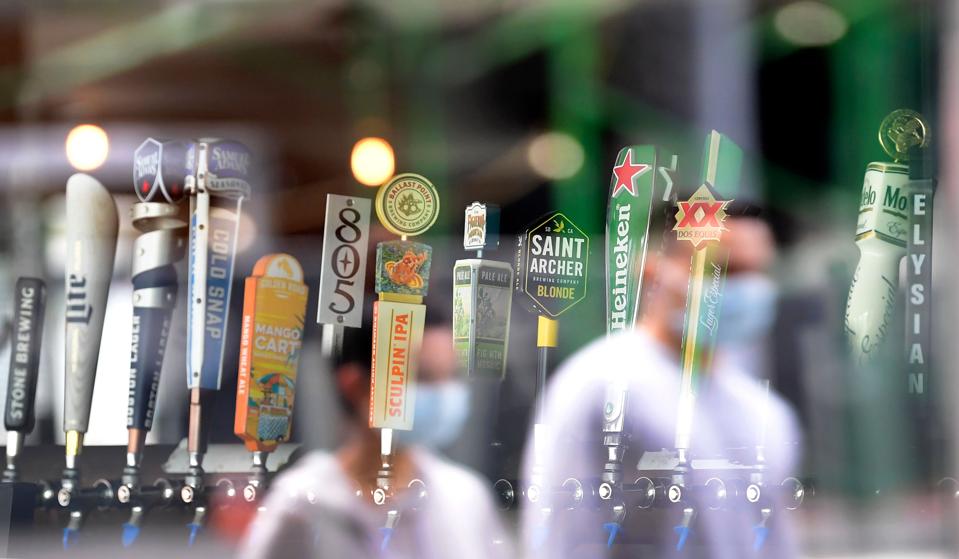 The reflection of pedestrians wearing facemeasks are seen as they walk past beer taps in a bar in … [+] Los Angeles on June 29, 2020 a day after the state’s governor ordered the immediate closure of bars in a number of California counties, including Los Angeles County, due to rising spread of COVID-19 cases. – The coronavirus pandemic is “not even close to being over”, the WHO warned today, as the global death toll passed half a million and cases surge in Latin America and the United States. (Photo by Frederic J. BROWN / AFP) (Photo by FREDERIC J. BROWN/AFP via Getty Images)

In a Monday afternoon press conference, California Governor Gavin Newsom announced the closure of all indoor restaurants statewide. Bars must cease all operations altogether. The order rolls out immediately, affecting some 40 million residents and tens of thousands of businesses up and down the West Coast. He spelled out the details in a subsequent tweet.

Newsom is describing the measures as an expansion of mandates put into place at the end of June, when he addressed surging coronavirus cases in Los Angeles county along with Fresno, Kern, Kings, San Joaquin, Imperial and Tulare. This was in anticipation of increased activity during the July 4th holiday. Numbers show that it might have been too little too late, however. Three days later, the state had tallied 11,700 new positives for COVID-19—a grim new milestone since recording had begun in early March.

Today’s announcement makes it clear that the immediate future for Californians will largely resemble those first few weeks of lockdown.

“We’ve made this point on multiple occasions and that is we’re moving back into a modification mode of our original stay-at-home order,” Newsom told reporters in a press conference earlier today, adding that this is a “dimmer switch” version of what residents will recall from springtime quarantine. The new rollbacks are expected to stay in place for at least three weeks.

The damage inflicted upon the state’s beleaguered bars and restaurants might be irreversible. In Los Angeles and San Francisco alone, hundreds of establishments have already shuttered permanently. For now eateries, at least, can rely on outdoor spaces to serve customers. And al fresco dining is always a dependable option during California summer. But the lion’s share of their revenue will be coming from delivery and takeout business.

With hospitalizations increasing more than 28% over the past two weeks, Newsom is left with few viable alternatives. An insurmountable body of evidence suggests that public dining, drinking, and other activities where masks can’t be maintained indoors leads to a direct surge in COVID-19 cases. With that total already at 320,804—with more than 7,000 deaths—the Governor is opting for the swiftest measure possible to curb the sort of spread currently being seen in Sunbelt states.

The largest counties in California, including LA, Orange, Sacrament, San Francisco and San Diego will also have to shut down other ‘non-essential’ businesses. This includes hair salons, malls, fitness centers, and places of worship in a swath of areas holding 80% of the state’s population.

If you’re a resident you can do your part to get these businesses back open as fast as possible. That includes following the new mandates, of course. Along with obeying current CDC guidelines for proper social distancing and mask wearing whenever in any public space.

Have You Made These 5 Coaching-Business Mistakes?