The state of California said Thursday it will file a lawsuit against the Trump administration over guidelines that force international students to take in-person classes in order to stay in the U.S., adding another legal challenge to a rule already under threat with a lawsuit from Harvard and MIT as well as a separate filing from the University of California system. 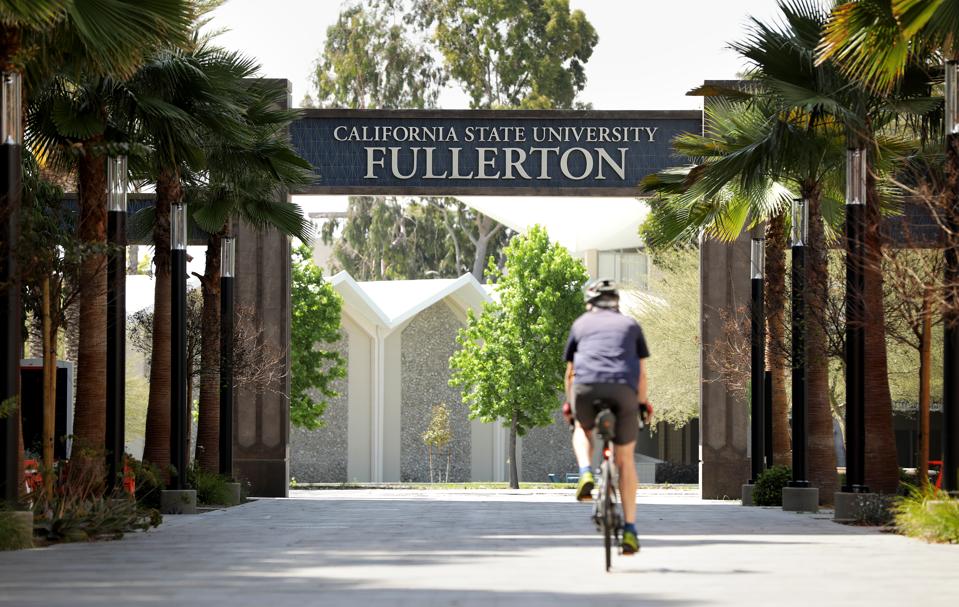 A cyclist passes through a deserted CSUF campus on Tuesday, April 21, 2020. The school is planning … [+] to begin Fall semester with online classes, one of the first universities in the nation to make that move as campuses throughout the country grapple with how long to stay closed to most students amid the coronavirus pandemic.

California Attorney General Xavier Becerra argues the rule is arbitrary and capricious and violates the Administrative Procedure Act, which dictates what procedural steps agencies have to take before enacting regulations.

Under the policy, which was announced Monday, students who are attending schools going fully online in the fall who wish to remain in the U.S. must transfer to another institution with in-person classes, which has created chaos for both students and universities, which risk losing lucrative full-tuition-paying students if they disenroll.

A press release announcing the suit says the policy failed to take into account that students may have already signed a year-long lease to rent an apartment or face difficulties traveling internationally due COVID-19 travel restrictions.

The release also says that schools adopting a hybrid model, which will offer both in-person and online classes in the fall, would be forced to fill out too much paperwork verifying that international students aren’t taking all their classes online.

“Shame on the Trump Administration for risking not only the education opportunities for students who earned the chance to go to college, but now their health and well-being as well,” Becerra said in a statement. “Today, President Trump appears set to do just that—amidst a global pandemic of historic proportions. Not on our watch. No one graduates more students from college or assembles a more talented and diverse group of future leaders than California.”

Ken Cuccinelli, the acting deputy secretary of the Department of Homeland Security, told CNN on Tuesday that the decision is meant to incentivize universities to open in the fall even as schools weigh the value of in-person instruction and the danger of a potential coronavirus outbreak in classrooms. If schools don’t reopen physical campuses, “there isn’t a reason” for international students to remain in the country, he added.

Harvard and MIT, as well as the UC system, also filed lawsuits this week challenging the policy. The universities argue they are in an untenable position, forced to choose between forging ahead with online-only classes at the expense of international students or taking the risk of holding in-person classes during a pandemic.

SEO Negotiation: How to Ace the Business Side of SEO — Best of Whiteboard Friday