Breaking
Looking To Improve Efficiency In Your Business? Here’s...
AI and machine learning for business
How Social Media Changed the World
Shopify: The Pros and Cons
Should your business go green?
Expanding Your Business Into Spain: What You Need...
Essentials For Your Office Coming Out Of COVID-19
What Can Marketers Learn From Digital Cults?
Why NASA’s James Webb Space Telescope Will Never...
Increasing HR Effectivity and Efficiency through Software Solutions
The Difference Between Building A Startup In Bull...
Fluor Corp Ranked Among Today’s Top Shorts
Common Pitfalls to Look Out for When Buying...
Will the Olympics go ahead this year?
Pack Up the Big Top: Insights from MozCon...
Best WordPress Themes for Blogs
Home Technology Camera Shootout: Oppo Find X2 Vs. Galaxy S20 Ultra Vs. iPhone 11 Pro
Technology 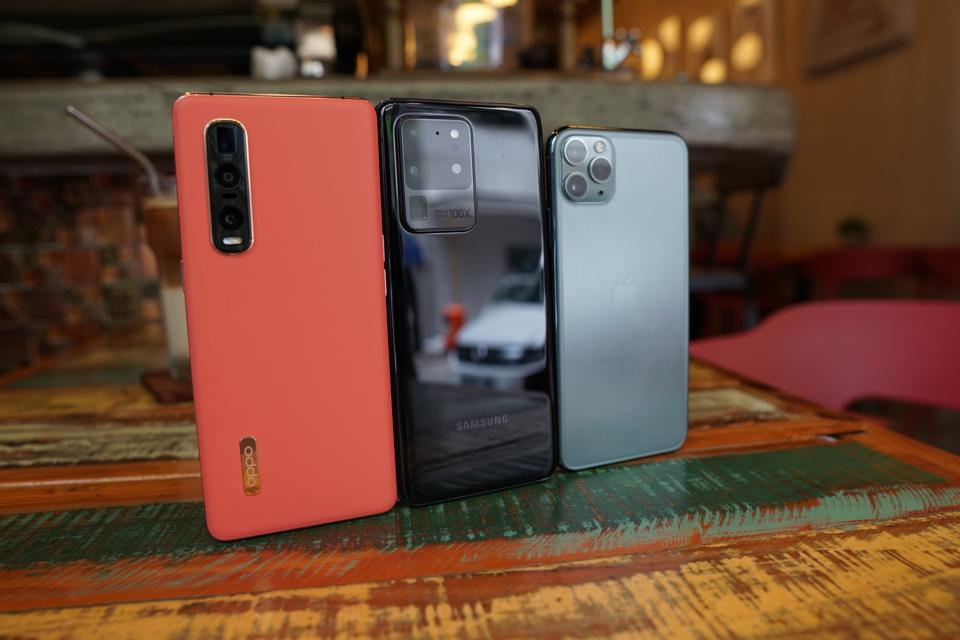 Samsung’s Galaxy S20 Ultra is receiving plenty of attention for its “Space Zoom” lens that can capture near lossless 10X zoom and digital zoom up to 100X. While this zoom tech seems new to many American and Korean consumers (and even media), it has actually been available on two Chinese smartphones for almost a year.

The tech in question is the so-called “Periscope” lens that Oppo first teased in 2017 and put into a commercial device in 2019. Huawei, too, used the lens in the Huawei P30 Pro.

Oppo’s just-announced new flagship, the Find X2, uses a gen-two version of this zoom lens. And since I am also testing the Galaxy S20 Ultra right now, this seems an appropriate time for a camera shootout.

I’m going to include the iPhone 11 Pro in some of these tests, because the iPhone is still the “default” phone of reference for many consumers.

First, let’s run over some specs: the Oppo Find X2 Pro has a triple camera system, headlined by a 48-megapixel Sony IMX sensor that was custom-built for Oppo. The wide-angle camera is also a 48-megapixel shooter, and the third camera is the aforementioned gen-two Periscope zoom lens.

Samsung’s top dog phone has four cameras, including a 108-megapixel main camera that is mainly used to shoot 12-megapixel photos after a processing known as “nona-binning” which combines nine pixels’ worth of image information into one (108 ÷ 9 = 12). The other cameras consists of a 12-megapixel wide-angle lens, a TOF (time-of-flight) sensors, and the Periscope lens that Samsung is branding “Space Zoom.”

Apple’s iPhone 11 Pro, meanwhile, has a trio of 12-megapixel cameras, with one doing standard photos, one wide-angle, and one a 2X telephoto zoom lens.

On paper, going by raw numbers, Samsung’s and Oppo’s camera systems completely towers over Apple’s. But in smartphone photography, software is proving to be as important as hardware. 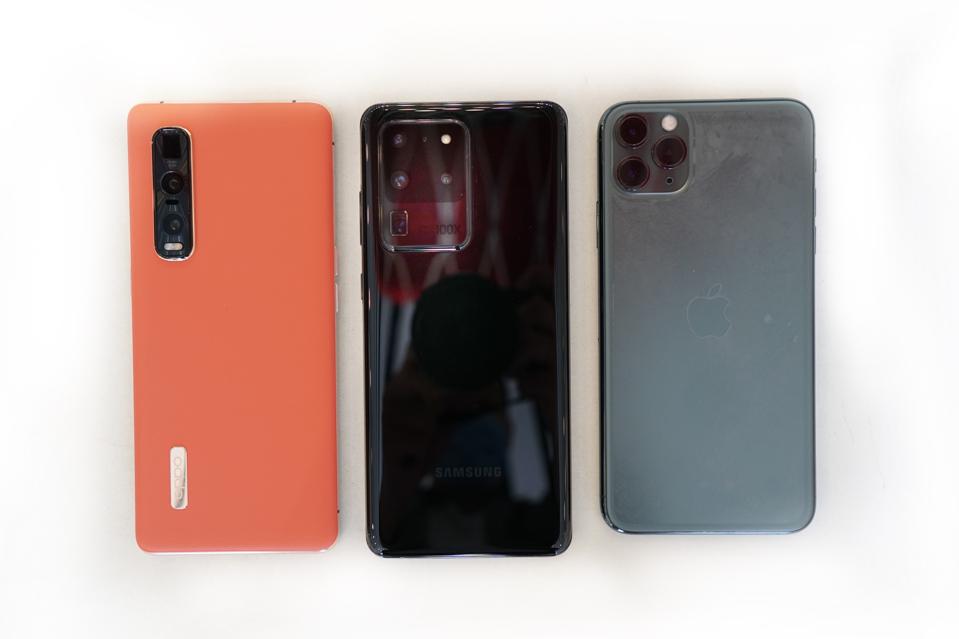 All three cameras are highly capable.

My rules for the test: I’m going to shoot photos with all three devices in various environments and lighting conditions. I won’t tweak settings such as exposure or focus—everything is in point and shoot. The idea is to see how smart these cameras are at producing a good shot for casual smartphone users. Then I’ll examine the photos on my 30-inch monitor in full size. The final samples you see here will, however, be compressed. The original untouched photos can be found in this Google Drive folder. 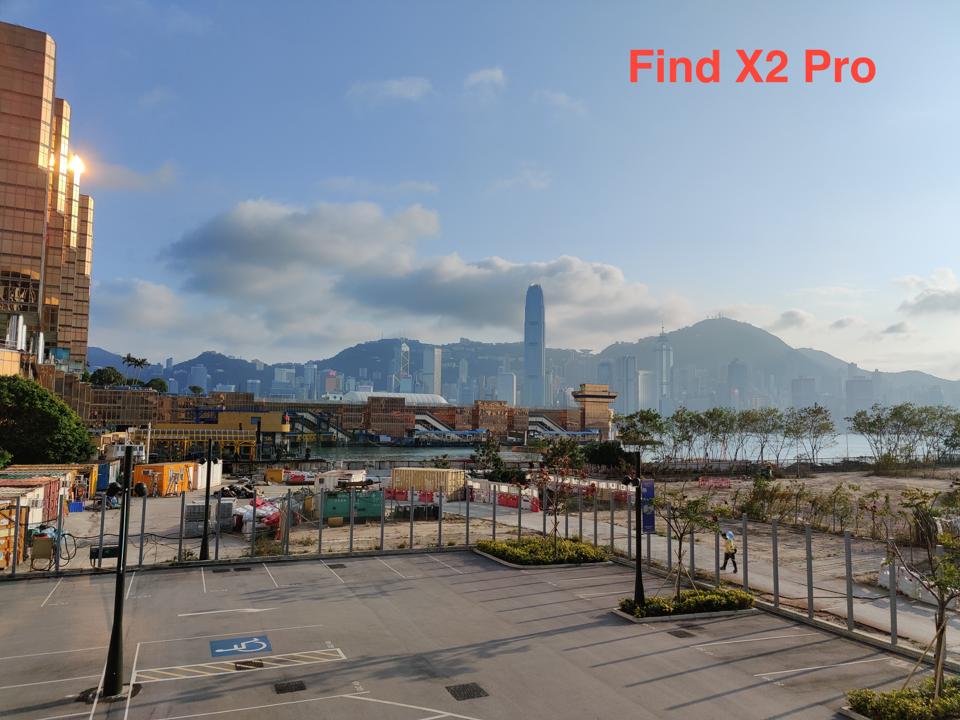 A standard shot at 1X. 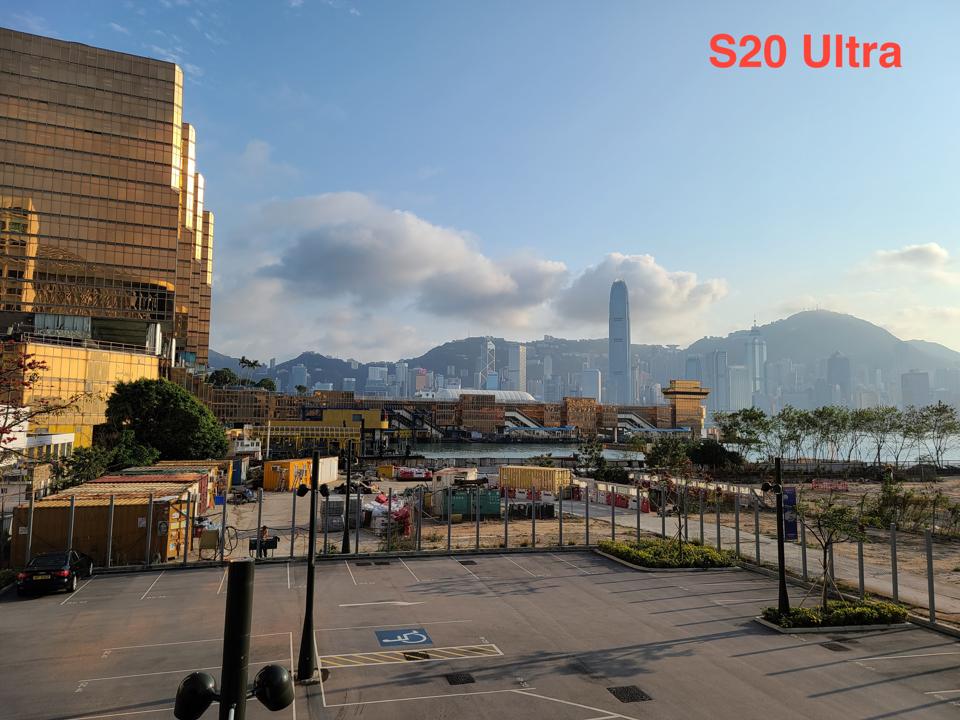 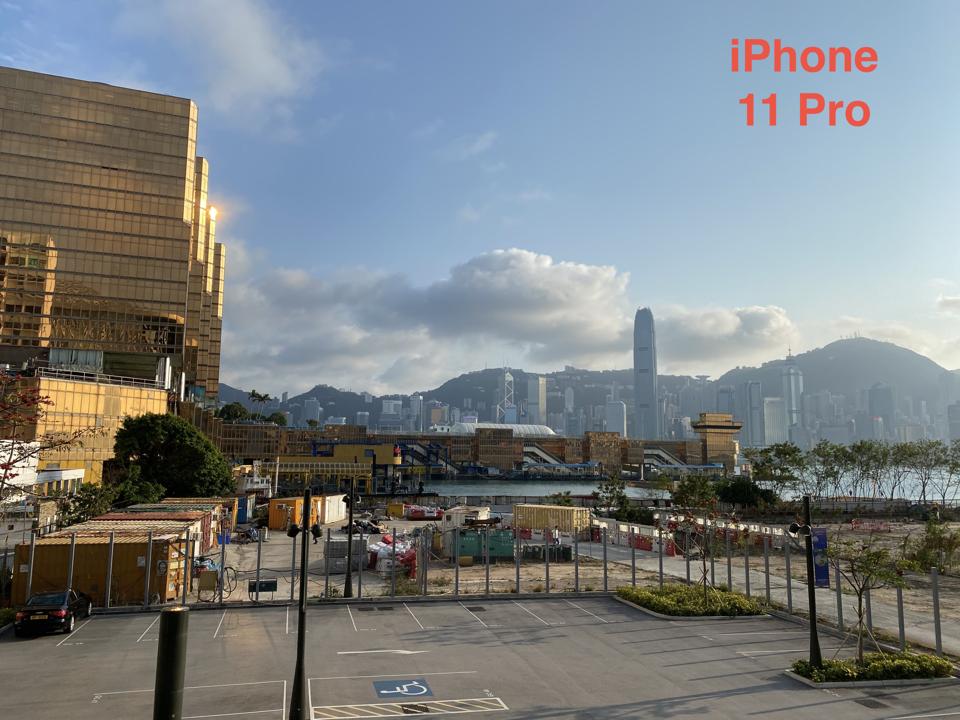 All three phones produced a beautiful shot, which was expected given the optimal lighting conditions. Let’s use this as a reference image for the next series… 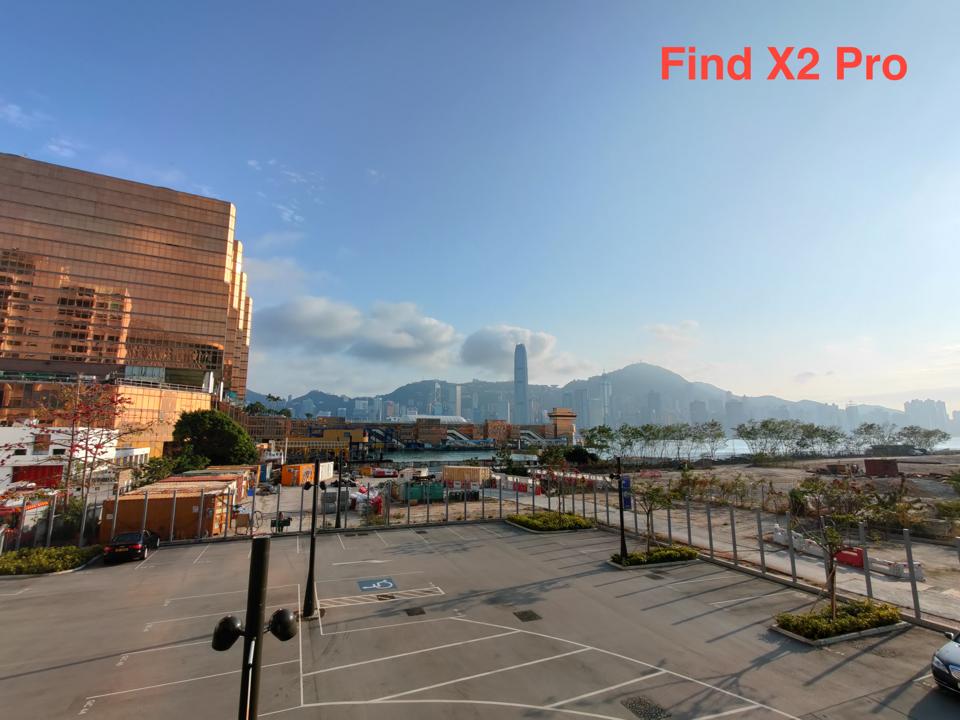 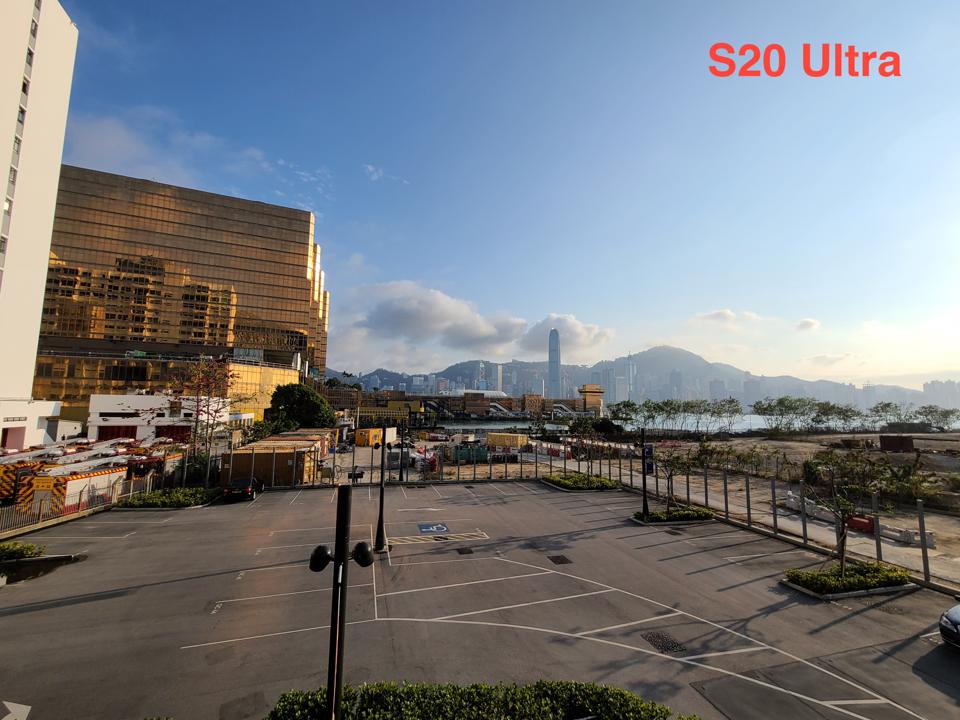 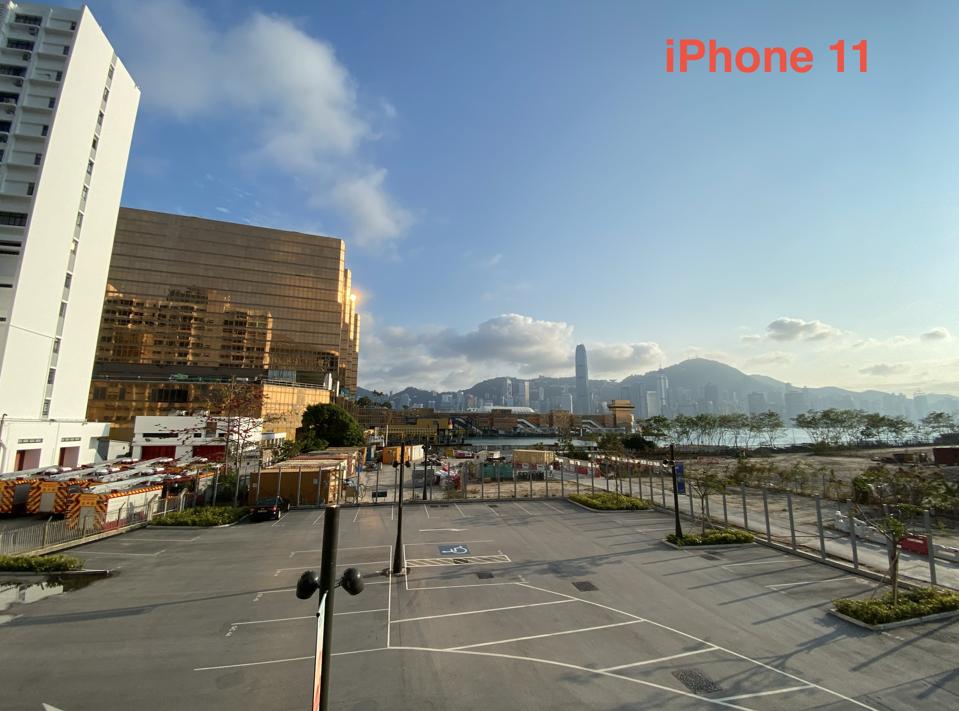 The Find X2 Pro’s wide-angle camera packs more pixels than Samsung’s and Apple’s, so it is the sharpest of the three images. The iPhone’s wide-angle image also has the most muted colors. This is more noticeable if I crop in. 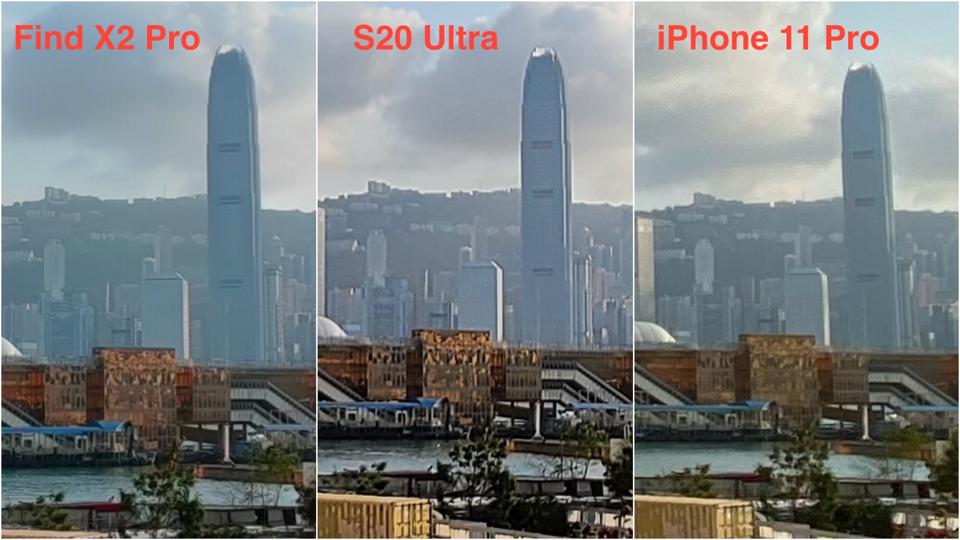 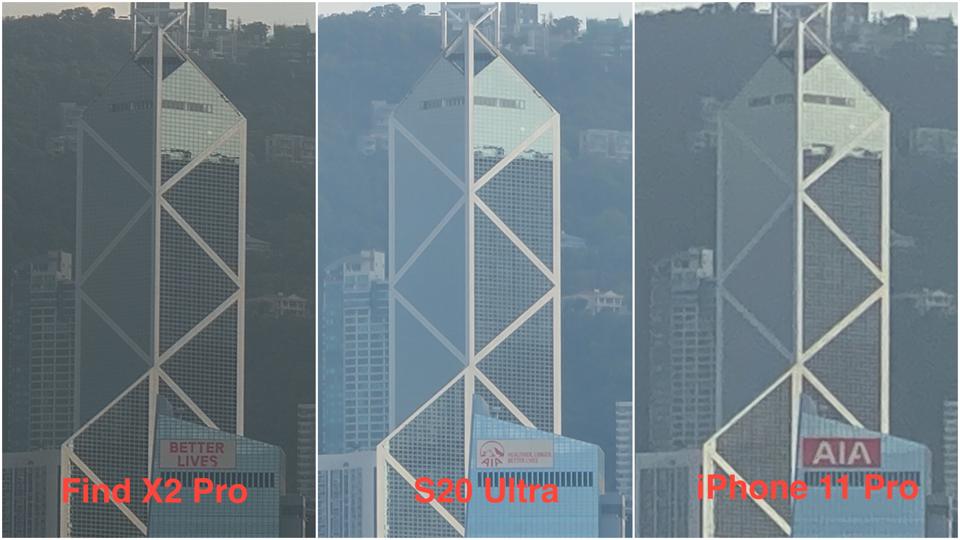 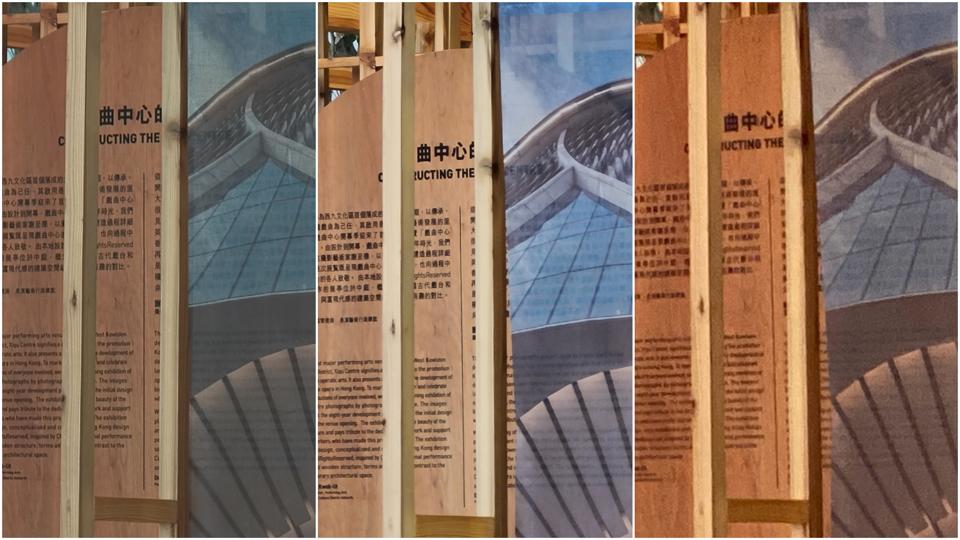 Another set of 10X zoom shots.

Moving on to zoom photos, the 10X zoom images above show the clear difference between a Periscope zoom lens in Oppo’s and Samsung’s phones and just a typical telephoto lens of the iPhone 11 Pro.

The iPhone maxes out at 10X zoom, and the shot exhibits noticeable noise. Both the Find X2 Pro’s 10X shot and the S20 Ultra’s are really clean for a 10X zoom taken by a handset, but Samsung’s larger sensor has allowed more light into the shot. This is a general theme for the rest of the zoom comparisons: Oppo’s zoom lens can produce just as sharp and detailed shots, but it’s dimmer than Samsung’s zoom shots. 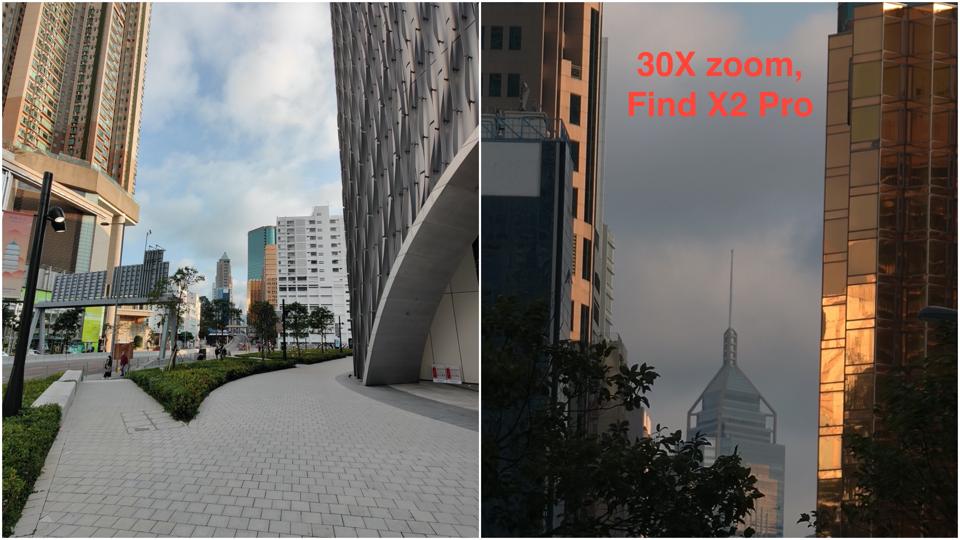 This a highly impressive zoom image, as the building I’m zooming in is barely visible in the wide-angle shot. Oppo’s image is mostly noise-free, but appears dim again next to the S20 Ultra’s shot at same focal length. 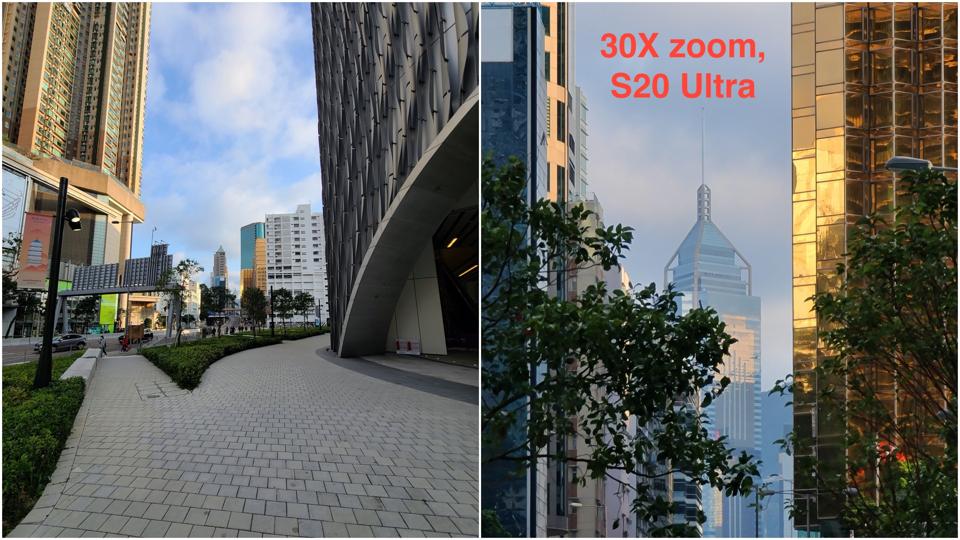 There is no iPhone 11 Pro sample because it couldn’t zoom past 10X. 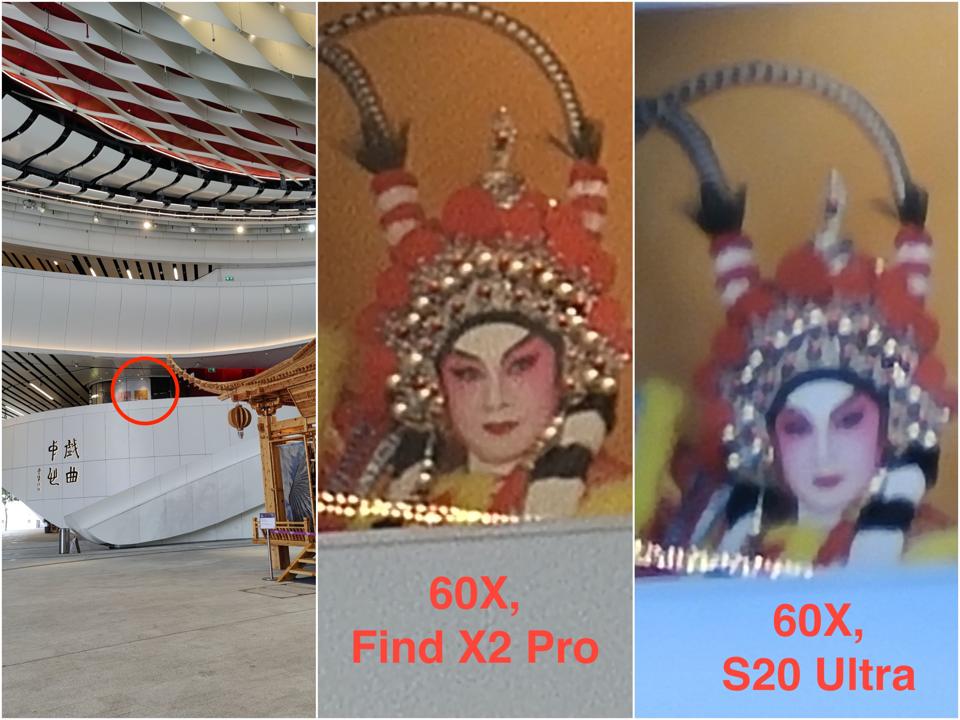 One of the headline grabbing features of Samsung’s latest phone is its ability to zoom 100X, but to be honest, zooming that far is a blurry mess. In fact, even at 60X zoom, the S20 Ultra’s shots begin to become borderline useable. Oppo’s software algorithms seems to do a better job at producing a still legible image at 60X. 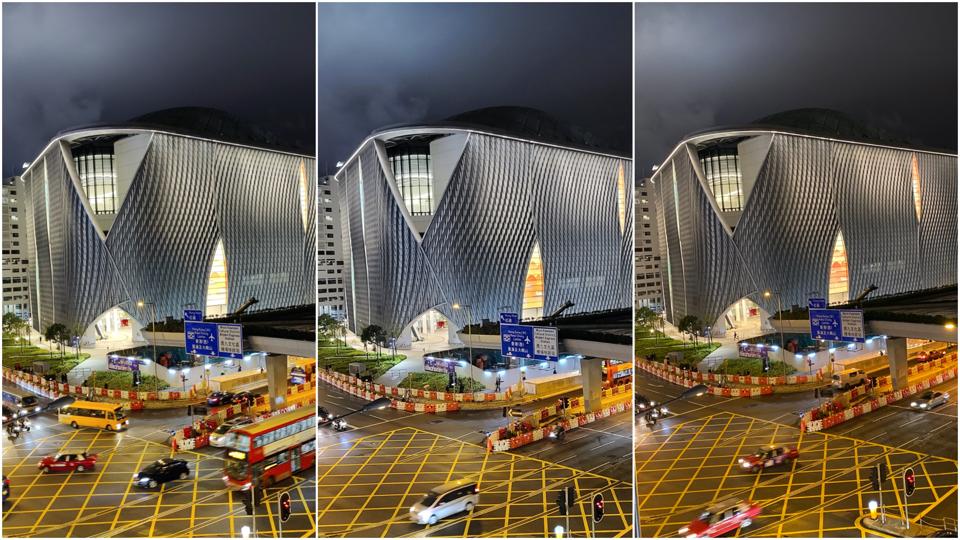 For a standard shot taken at night without night mode turned on, the S20 Ultra produced the most balanced shot, but Samsung’s algorithms have cooled the shot to make it appear less “yellow,” which does make the shot more aesthetically pleasing to my eyes. But if we’re going by color accuracy, the iPhone 11 Pro’s shot is the most natural and true to the real life, with its yellow-ish, warmer tones accurately representing the lights glowing from the building. The Find X2 Pro found a good balance, fixing white balance enough to tone down the yellow without losing the original feel of the building. But Oppo’s shot is slightly blown out, and the iPhone 11 Pro’s image is not as sharp.

The next three photos were taken in a near pitch-black room, with all lights turned off and only a bit of ambient light peeking through the window. 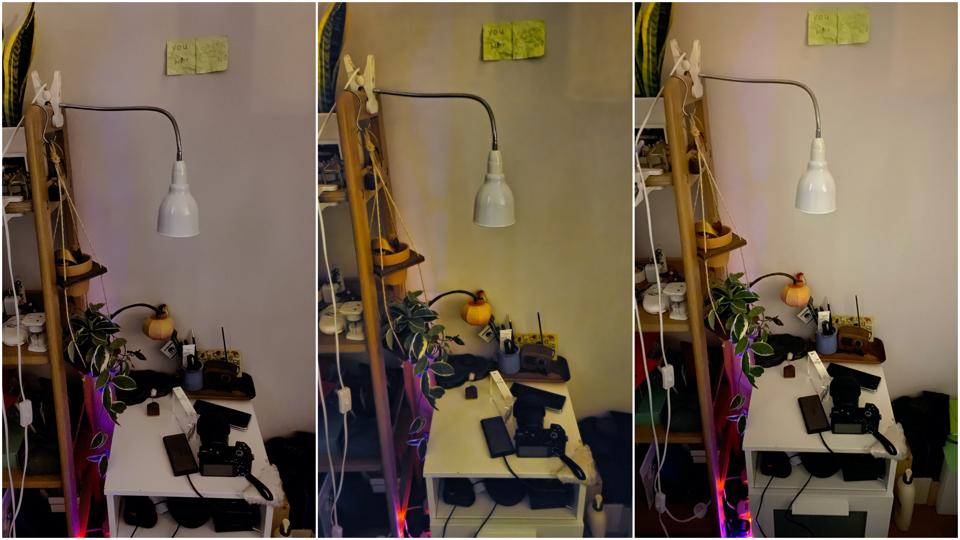 Samsung’s night mode was a mess last year and it appears to be the case again this year. The shot is blurry and unnecessarily yellow, considering the scene was near black to my eyes. The Find X2 Pro’s image is easily the best, with the most accurate colors and sharpest details. Look at the Post-it notes on the wall—you can at least see some semblance of words and that they were crumbled at one point in Oppo’s shot; on the iPhone’s image it just looks like a yellow square. 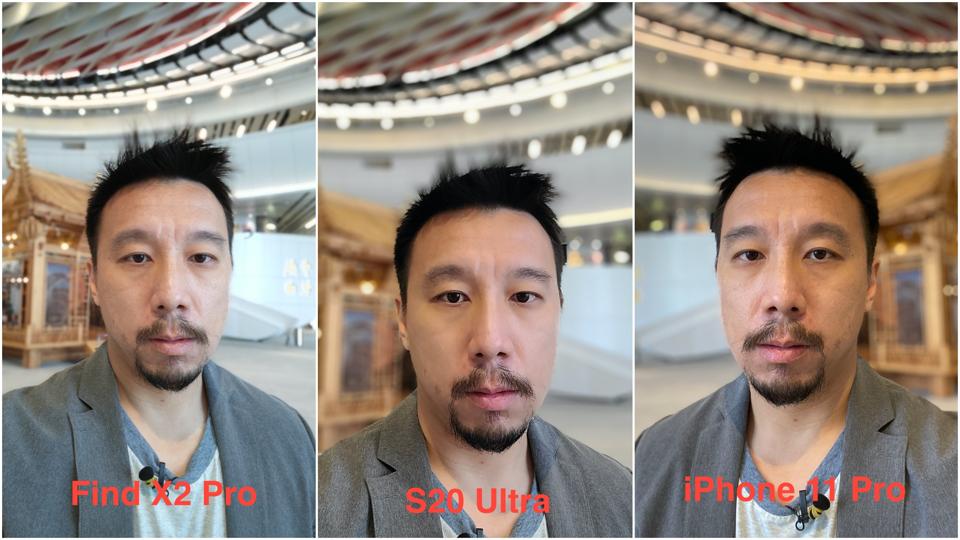 All three phones were unable to correctly identify the top parts of my hair, blurring them unnecessarily, but otherwise edge detection on all three are good. As expected, the iPhone’s selfie it the most natural and accurate photo, while Samsung and Oppo both deployed some post-shot “beautification” touch-ups. Samsung’s, as usual, goes completely overboard, smoothing and whitening my skin to the point it looks unnatural if you look closely. Oppo’s selfie is excellent all around, and may be my preferred shot. 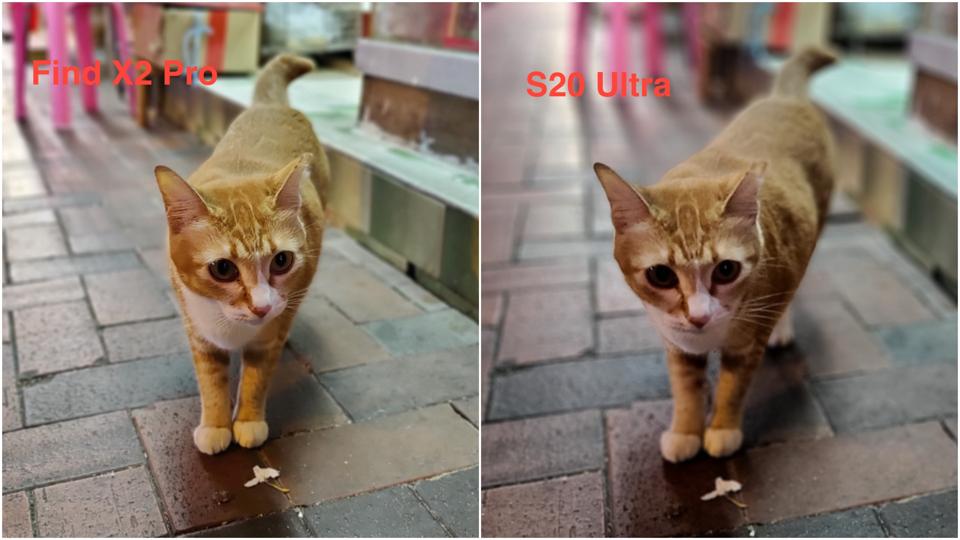 Because Samsung is using a 108-megapixel camera, it needed an unusually large sensor size to compensate (in digital photography, the higher the pixel count, the more light you need). The large sensor has drastically improved Samsung’s low light performance, but at the same time has affected the S20 Ultra’s auto-focusing. A wider sensor results in a shallower depth of field, and so in many shots, I notice if I wasn’t being careful, the S20 Ultra will not only blur the background, but the foreground, too.

These shots are a good example: the background around the cat is blurred, but so, too, is the cat’s face.

During the Find X2 Pro’s launch, Oppo made a point of highlighting its low light video capabilities, made possible by a combination of using multiple sensors and software algorithms. The results are quite remarkable, especially compared to the exact same video shot by the Samsung Galaxy S20 Ultra.

The truth is smartphone cameras are getting so good they’re all highly capable. While the iPhone’s computational photography is among the best, its camera hardware is relatively low spec’ed compared to Samsung’s and Oppo’s. The larger sensor size really do make a difference in images, as light is the most important element in digital photography.

The S20 Ultra can do a lot of superlative things, such as zooming in 100X or recording 8K video, but both of these features are of little use in the real world (there aren’t enough screens that can handle 8K content for 8K videos to be anything but a niche right now), and its auto-focus problems right now needs to be fixed.

Oppo, meanwhile, seems to have worked on the things that matter: larger sensors for better low light videos and photos. But each phone has its strengths, and we’re spoiled to have all these great cameras to choose from.