Breaking
‘Game & Watch: The Legend Of Zelda’ Will...
The 9 Fundamental Components Of A Startup Pitch...
How to Get Results from Broken Link Building
Florida Supreme Court Tells The American Bar Association...
How to Write Perfect Paid Social Media Marketing...
How Restaurants Can Design a More Sustainable Food...
Expenses That Small Business Owners Need to Be...
How You Can Make Saying Goodbye To The...
Biden To Meet Royal Family At Cornwall’s Eden...
It’s Going To Be Emotional — Going International...
Peer Mentoring For Students: STEM & Buds
7 PR Trends in 2021: The Story So...
Google Plans Radical New Google Pixel Smartphone Upgrade
Where Did COVID Come From?
Ride To Growth With A Business Vehicle
C3.ai’s Tom Siebel: How To Scale AI
Home Technology Can You Look At These 16 Award-Winning New Photos Of The Northern Lights Without Getting Itchy Feet?
Technology

Can You Look At These 16 Award-Winning New Photos Of The Northern Lights Without Getting Itchy Feet? 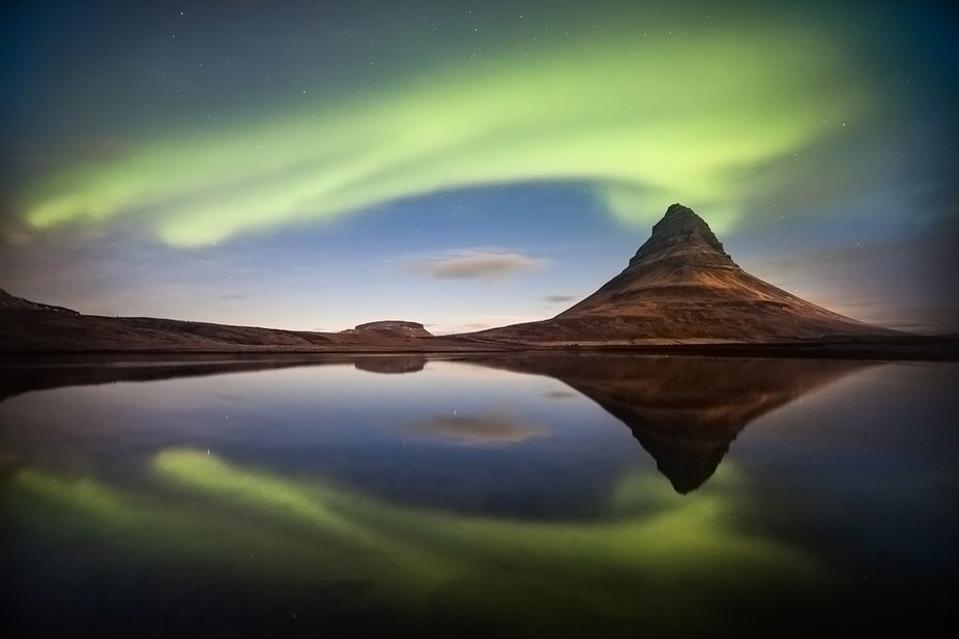 Grand Jury Winner “Eruption of the light” by petersvoboda

Have you ever headed north to gaze at one of nature’s greatest spectacles? If you’re any kind of nature-lover, a session with the Northern Lights—also called the aurora borealis—is probably already on your bucket list.

Where to see the Northern Lights

Although these polar lights are occasionally visible further south, they can be reliably seen on the edges of the Arctic Circle at around 65° N. To see auroras on any clear night all you need are long, dark nights (October-March) and clear skies (less predictable) in the likes of Iceland, the Faroe Islands, northern Norway, northern Sweden, northern Finland, northern Russia, northern Canada and Alaska.

Get to 65° N and you’re probably going to want to have you camera ready, which is exactly what’s on the mind of the members of photo-sharing community ViewBug, which just ran a big Aurora Borealis photo contest. “Many of the three million members on Viewbug love shooting landscapes, and visiting a location to capture auroras is becoming more popular for many enthusiast nature and travel photographers,” says Ori Guttin, co-founder at ViewBug. “We see community members traveling to Canada, Alaska, Norway, and Iceland to experience the amazing spectacle of the auroras.”

Here are the top finalists from its latest photo contest. Scroll down for some advice on how to take your own images of this ethereal wonder.

Grand Jury Winner: ‘Eruption of the light’ by Peter Svoboda

Grand Jury Winner “Eruption of the light” by Peter Svoboda

The winning image is of the aurora around Kirkjufell, an iconic 463 m high mountain on the north coast of Iceland’s Snæfellsnes peninsula, near the town of Grundarfjörður. “This photo is a great example of how to capture a gorgeous aurora image,” said the editors at Viewbug. “The location is very special and the way the photographer captured the aurora positioned perfectly behind the peak of the mountain resulted in a beautiful composition, allowing the reflection of the aurora to fill the lower part of the frame.”

This photo was taken from Norway using a Sony ILCE-7M2 camera. 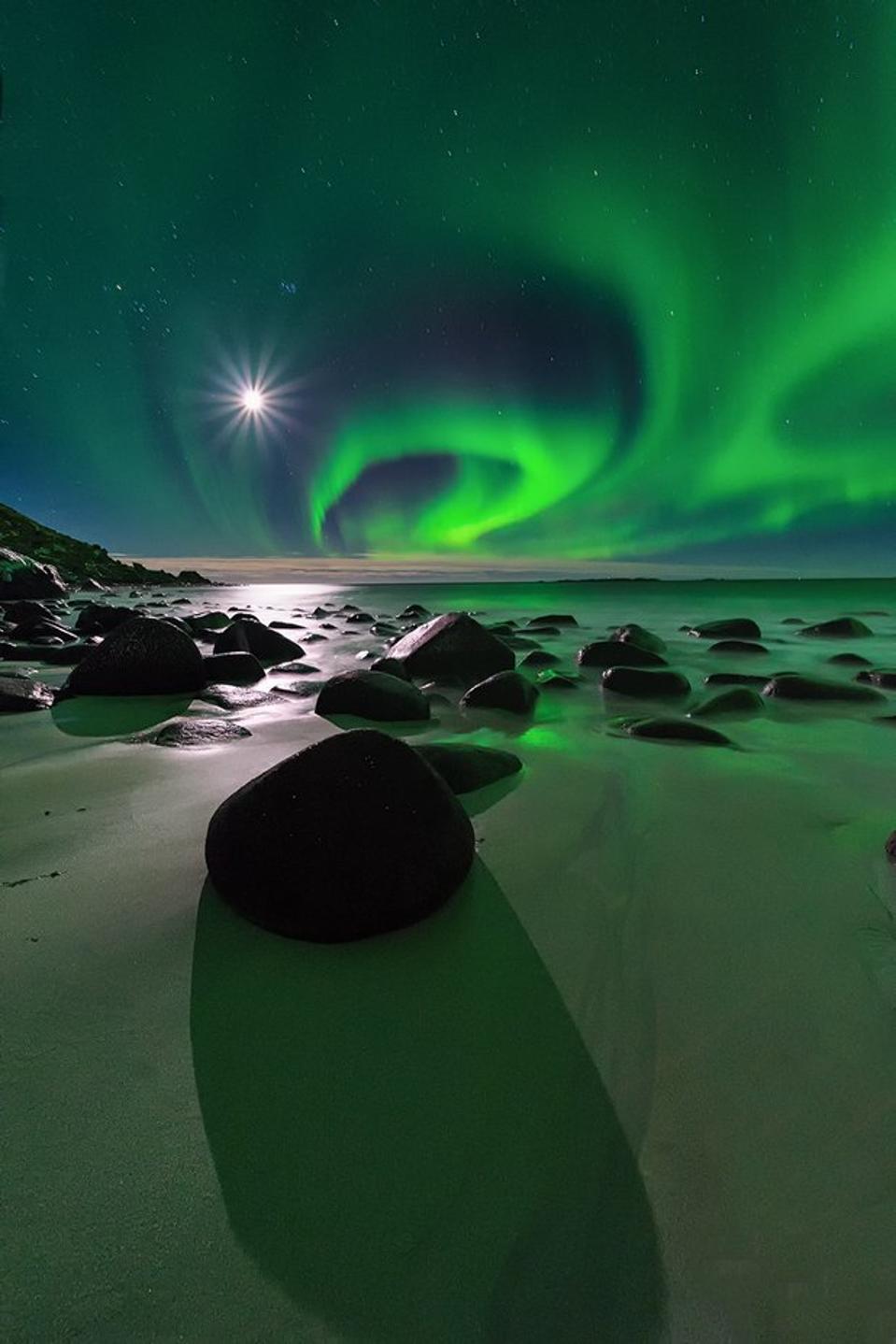 Runner up: ‘The green storm’ by Lorenzo Ragazzi

Here’s a great shot from near Tromso in Norway. 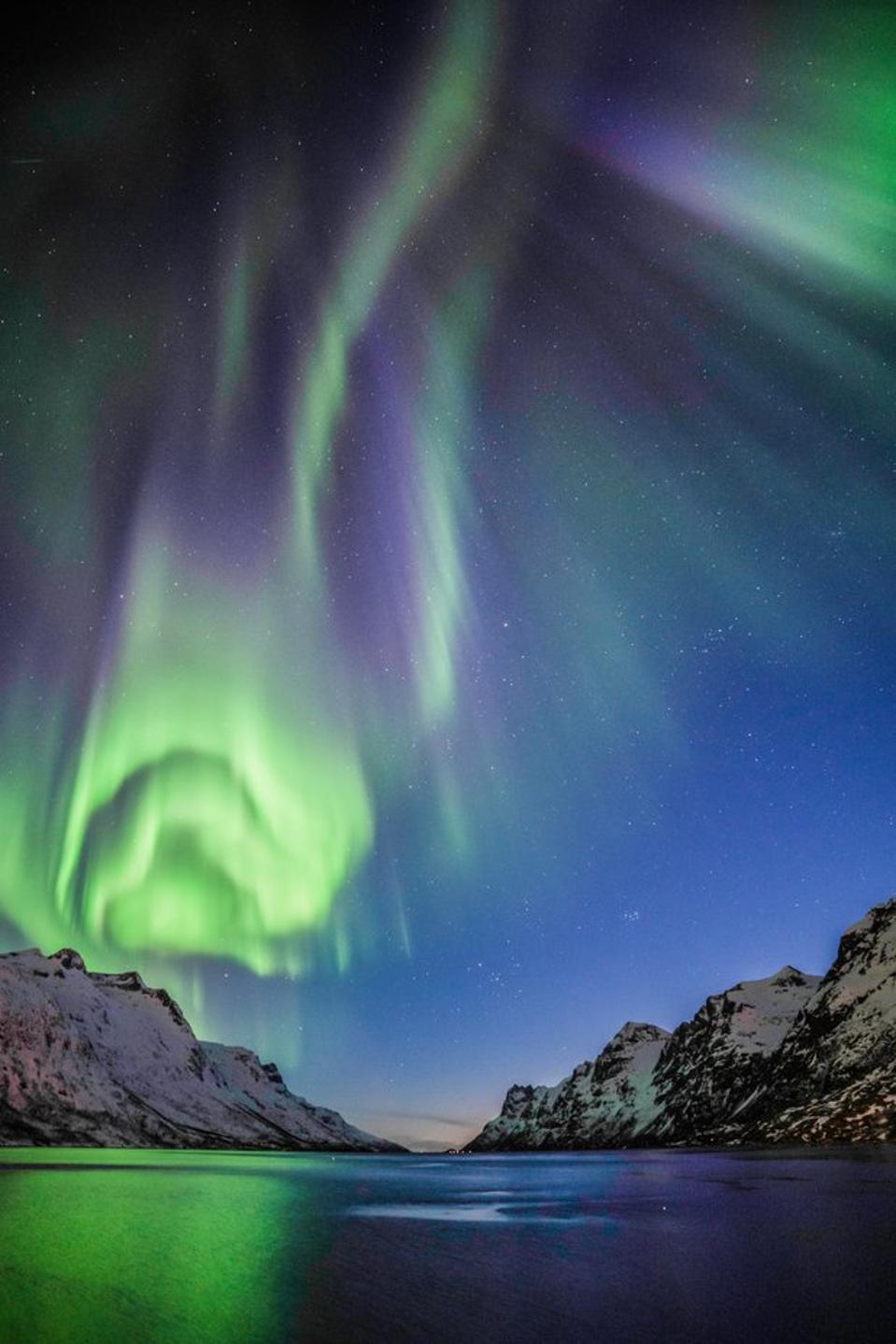 ‘The green storm’ by Lorenzo Ragazzi

Runner up: ‘Watcher’ by Nicolai Bruegger

The aurora dancing over the Lofoten Islands, Norway. 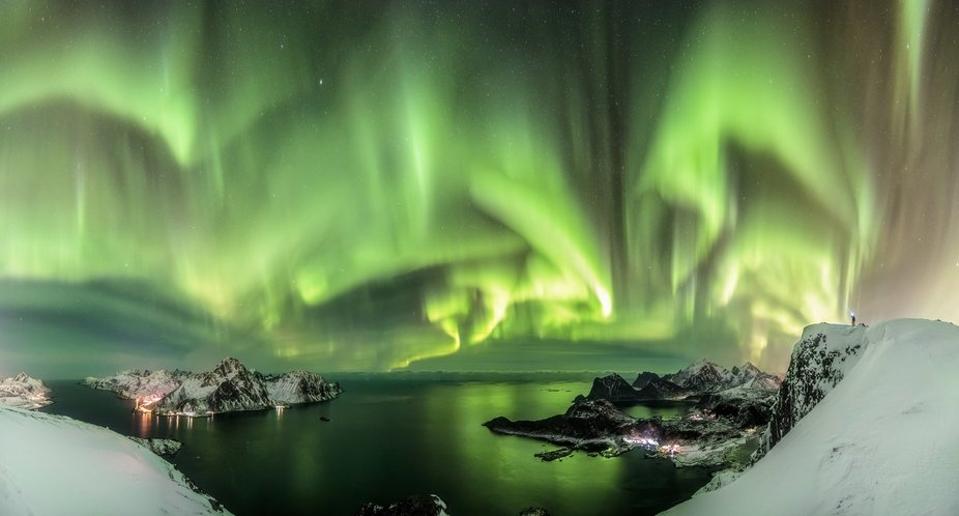 Runner up: ‘The Northern Lights’ by Angie Aird

Shot with an Olympus E-M10 Mk. III, this photo was taken from Iceland. 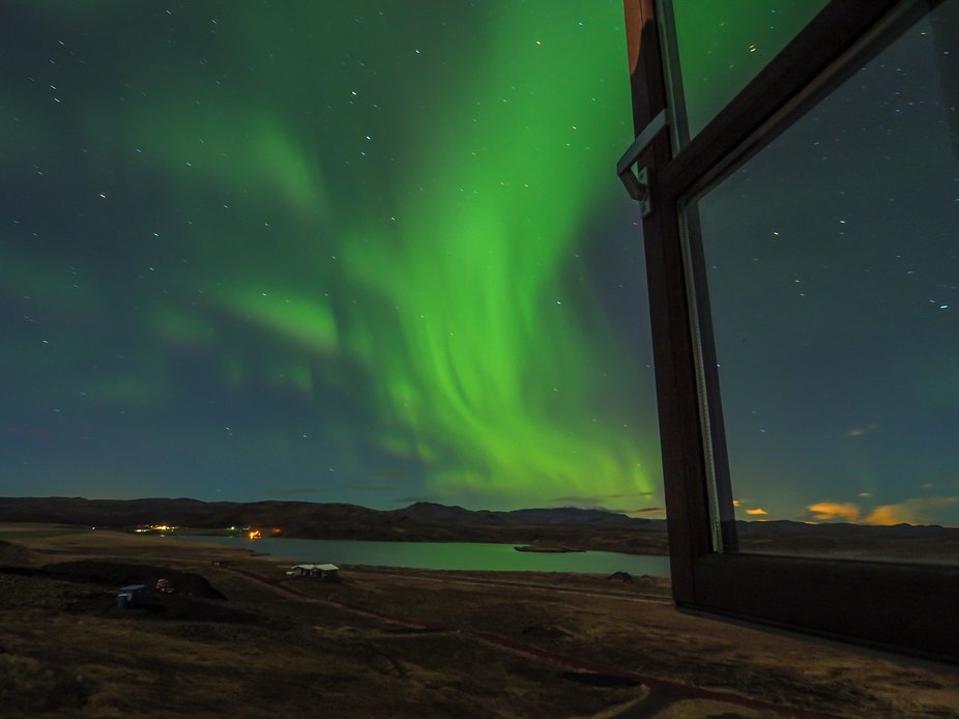 It’s definitely getting simpler. “Modern DSLR cameras and even mobile devices make it easy to shoot the northern lights,” says Guttin. “Cameras make it easy to set up the right settings and adjust your aperture, exposure, and ISO. The trick is having a good tripod, using an external shutter trigger and finding the right location with low light pollution.”

Here are a few tips to capture a great aurora:

Check the aurora and weather forecasts, find a good spot away from city light and scout for the locations during the daylight.

Use BULB mode, a shutter release trigger, and a strong tripod to prevent any type of movement.

It is best to adjust your exposure rather than your aperture. Try playing with exposures of 5 to 20 seconds.

Another shot of the aurora borealis from Iceland, this time using a Nikon D3500. 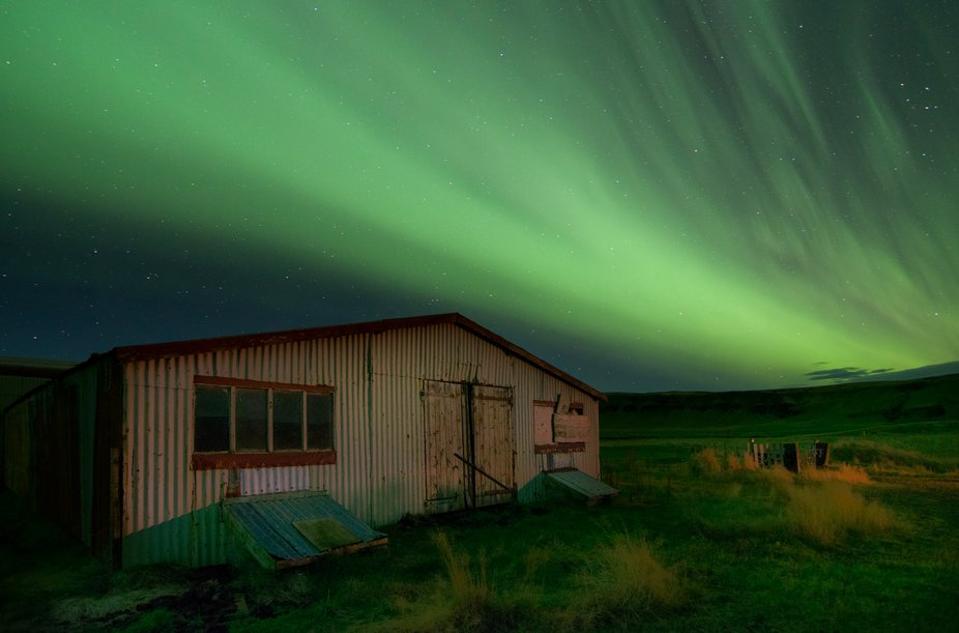 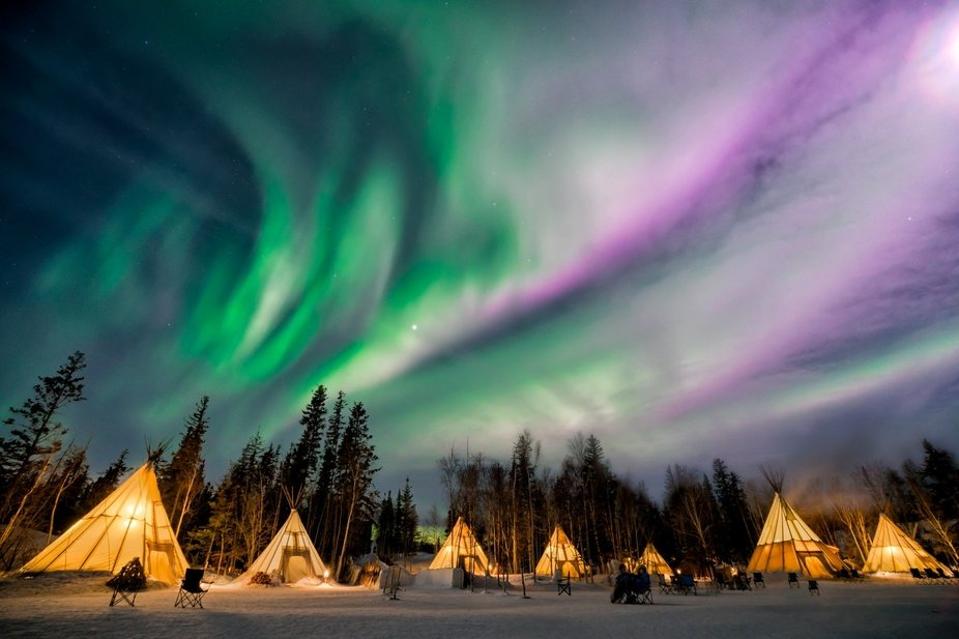 The northern lights in Canada, by Sabrina Joseph.

Runner up: ‘Choose Your Own Adventure’ by Garret Suhrie

A remote town in northern Alaska is the setting for this striking photo of the aurora borealis. Shot with a Nikon D800. 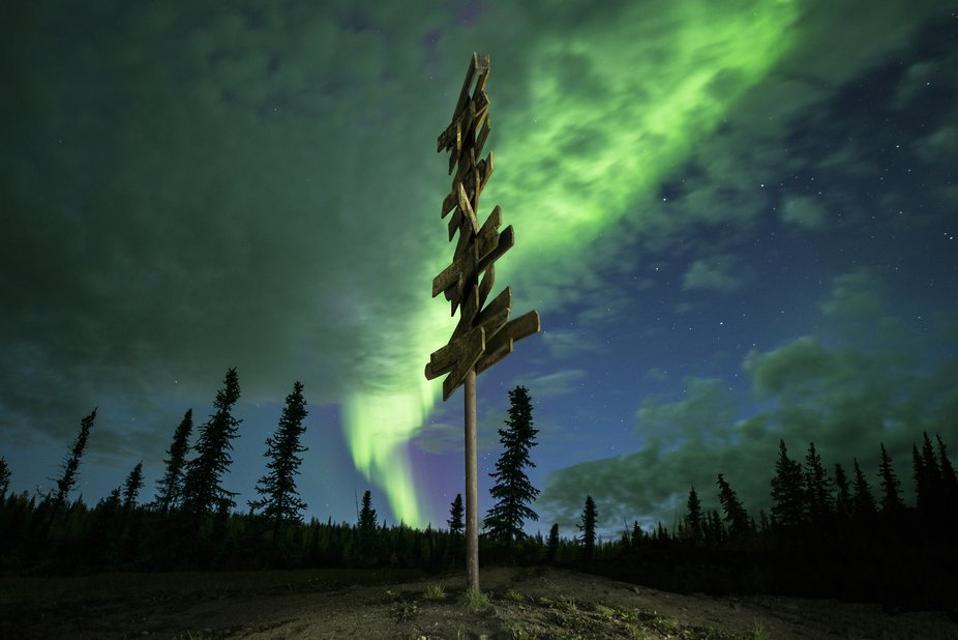 Runner up: ‘Aurora In Kontiolahti’ by Jason Tiilikainen

A ‘lonely tree’ and the aurora from eastern Finland. 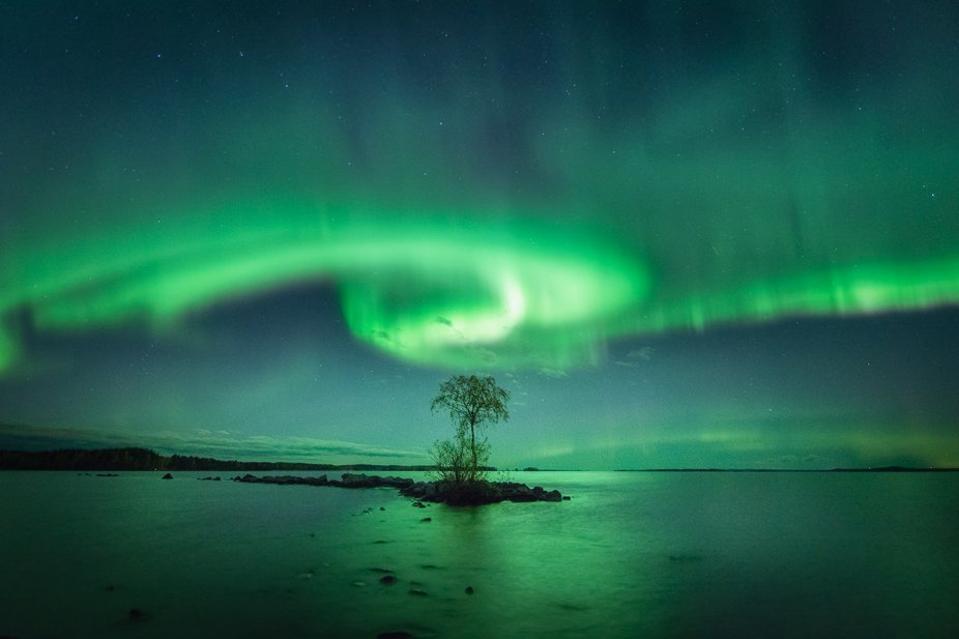 Jason Tilikainen’s photo of the northern lights was taken in Kontiolahti, Finland.

Runner up: ‘Tungneset’ by Paal Lund

A Canon EOS 5DS was used to capture this Northern Lights show on Senja, Norway. 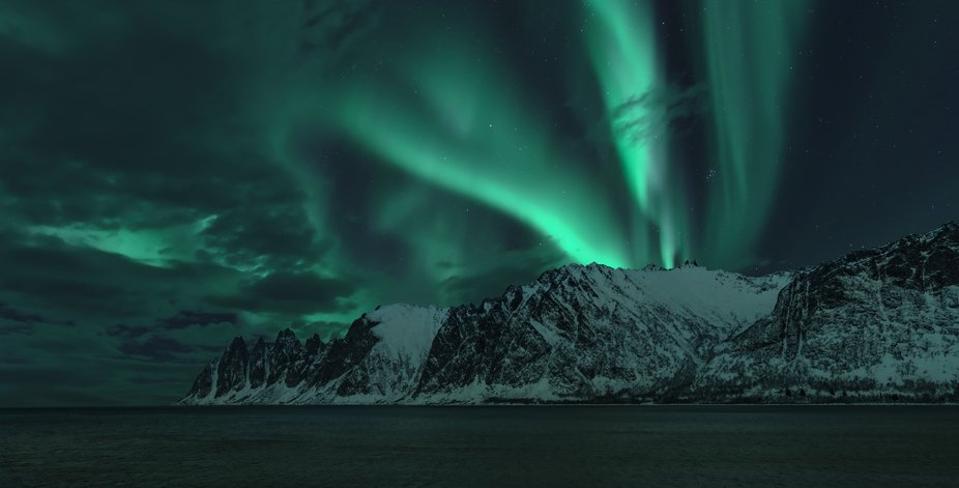 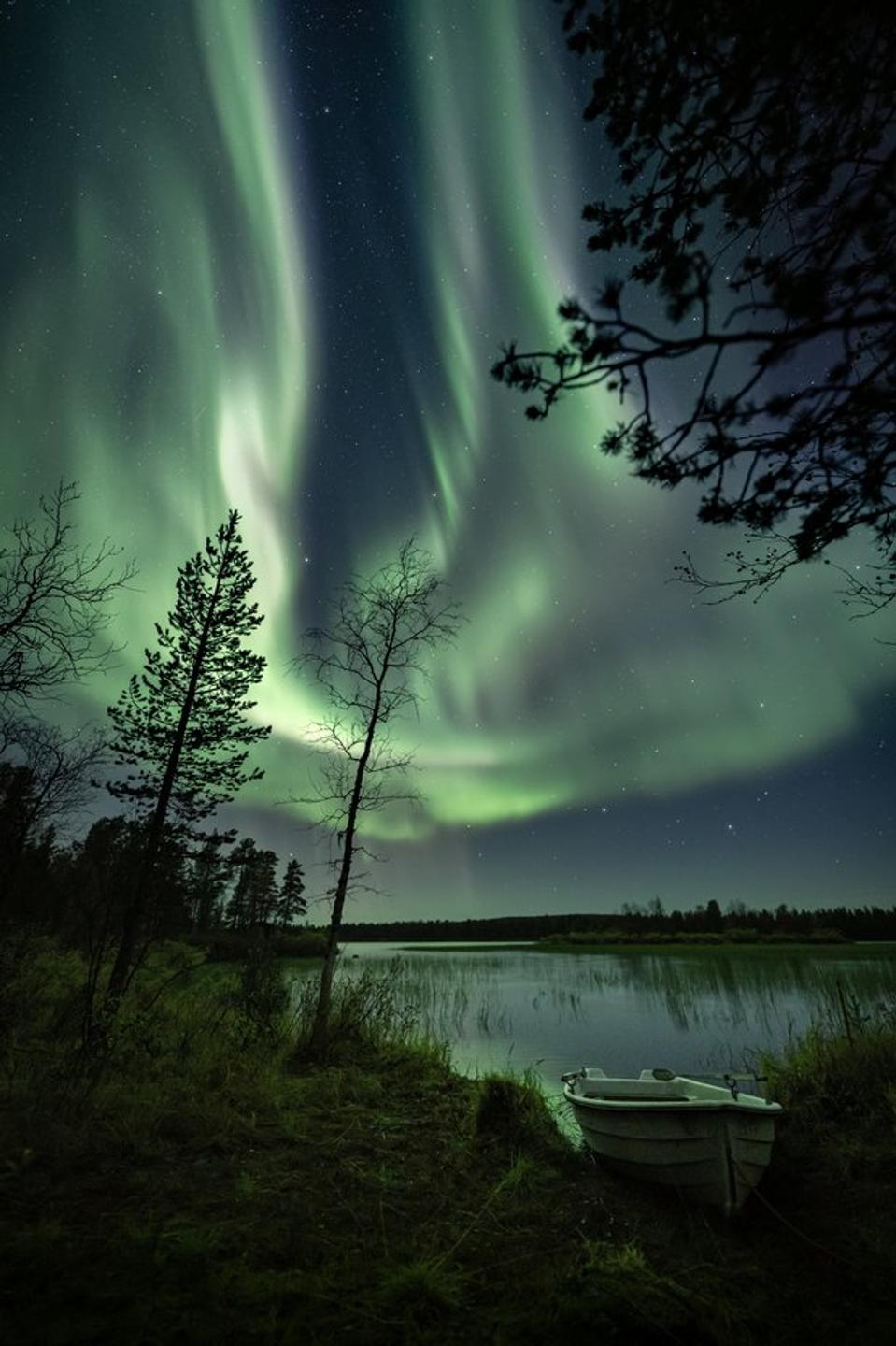 The northern lights over the incredible Jökulsárlón glacial lagoon in southeastern Iceland. 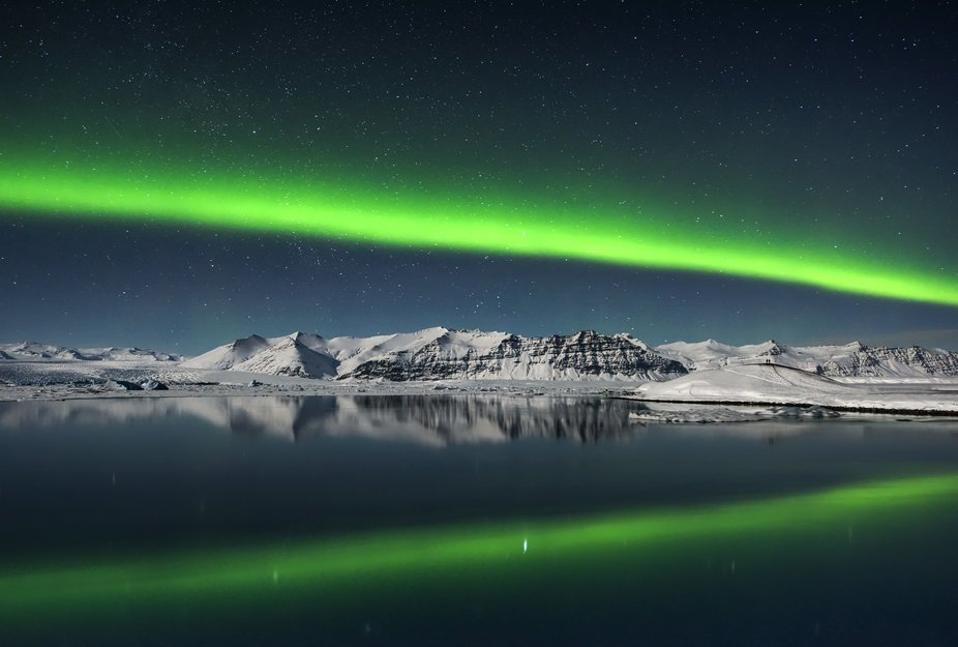 Runner up: ‘The Gateway’ by James Rushforth

The aurora from Heimskautsgerðið, or Arctic Henge, near Raufarhöfn in northern Iceland where. It’s one of four archways orientated to face the compass points. 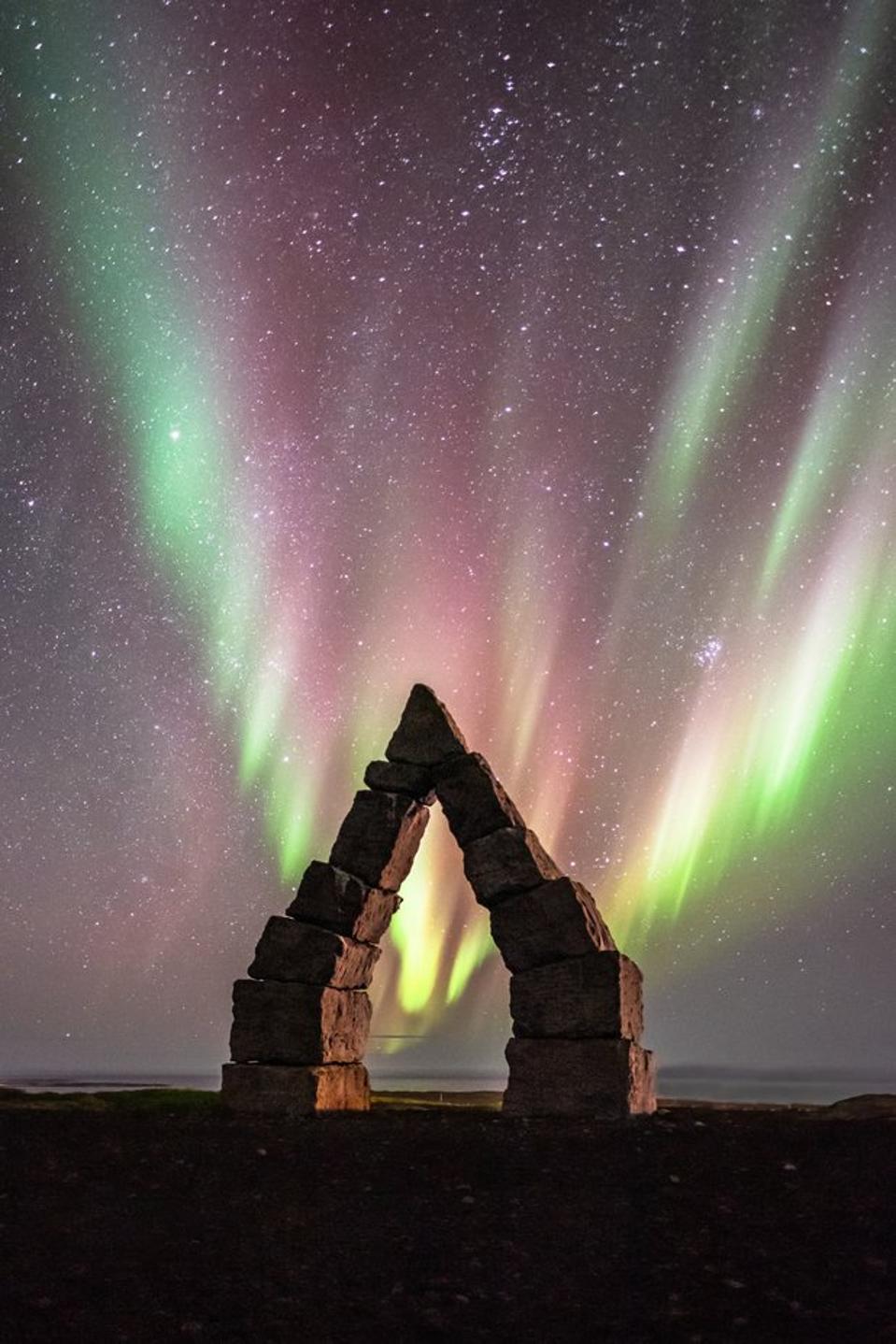 A image from Raufarhofn in Iceland, by James Rushforth. 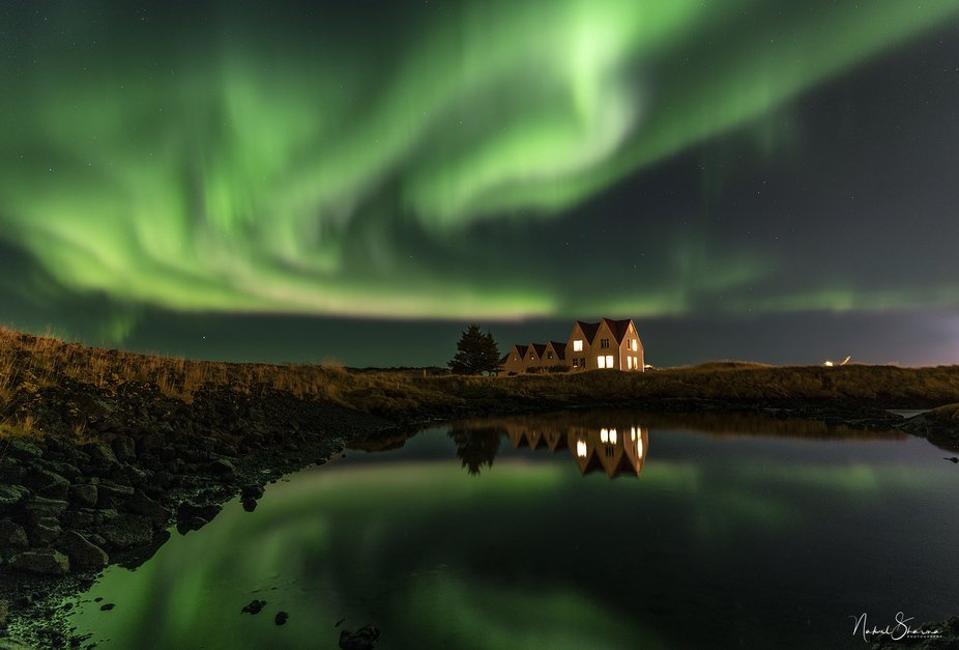 The aurora from Vestmannaeyjar, an archipelago off the south coast of Iceland. 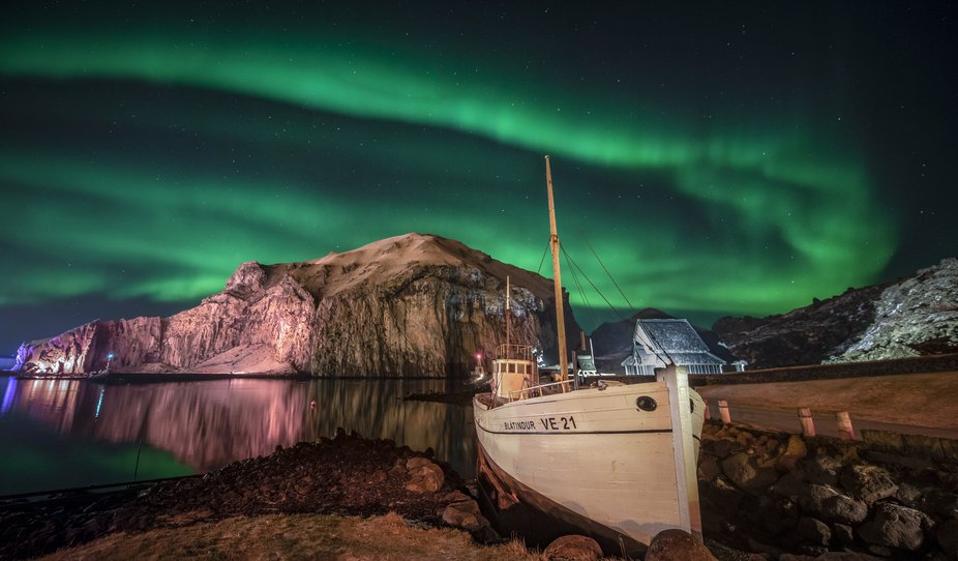 What causes the Northern Lights?

They are the result of charged particles from the sun colliding with nitrogen and oxygen atoms in the Earth’s atmosphere. After the collision, those electrons release energy as a photon of light. However, it’s where this happens—along the filed lines of Earth’s magnetic field—that creates the beautiful and ever-changing shapes.