Breaking
Don’t miss out on a seasonal marketing boost
How to start and register a company in...
The best places to host a business breakfast...
Everything You Need To Know About CBD Balm
How to Ensure Your Business Thrives From Day...
The Top 5 Best Internal Communications Tools for...
Tips On Preparing Your Business For Summer
How commercial storage can help you keep your...
Great Ways to Get Your Workers Involved in...
How online casinos have changed over the years
Is Your Office as Eco-Friendly as You Think?
Hair Extensions – What you should know about...
How to Create a Successful Career in Business
What happens if your employee is injured at...
How Does A Virtual Business Address Work? Everything...
Introducing Direct.Me the new Link In Bio service
Home Business Canelo Alvarez Vs. Sergey Kovalev Odds, Purses, Records, Prediction: Boxing Biz
Business 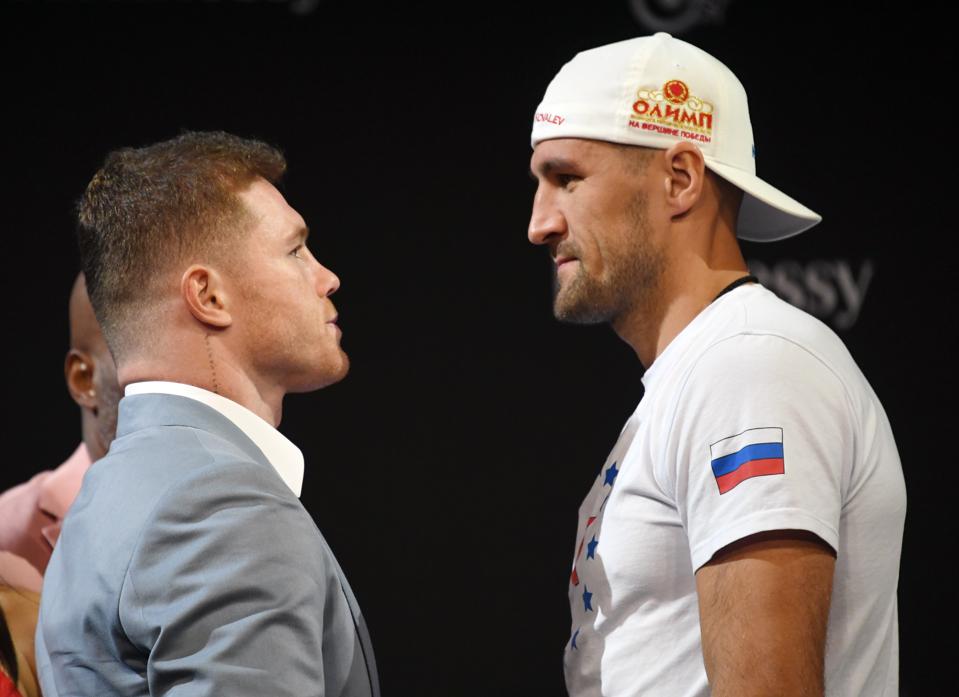 Whenever Canelo Alvarez fights, it’s a major event. Even though many in the boxing community are disappointed that Alvarez doesn’t seem to have much desire to face Gennadiy Golovkin for a third time, his fight Saturday could help salve some of that pain. It’s because Sergey Kovalev, though he’s a solid underdog, will provide a tough test for Alvarez as he moves up from a 160-pound middleweight to the 175-pound light heavyweight division. Alvarez isn’t the best fighter in the division anymore, but he has the most name recognition.

There’s plenty of danger for Alvarez on the DAZN broadcast, even though most fighters are picking him to win. Kovalev hits hard. Alvarez will weigh more than he ever has for a fight, leaving some to wonder if he’ll be as agile and crisp as a heavier fighter.

But he’s certainly breaking barriers of what has become an almost assured Hall of Fame career.

“When we first started working with Canelo over a decade ago, we knew he was destined to be great,” Golden Boy promoter Oscar De La Hoya said. “I think we are all aware now that we are witnessing greatness in the making.”

There are plenty of reasons to watch Alvarez vs. Kovalev. Here are three of them.

1) Alvarez is a great body puncher, and Kovalev is vulnerable there: No matter what the Kovalev camp says about Andre Ward’s low blows that led to the Kovalev TKO in their second fight, there’s no doubt that Kovalev was badly hurt to the body in that bout. Then, in his last fight, Anthony Yarde had success by focusing on Kovalev’s torso and was close to stopping him as well. Considering Alvarez is one of the sport’s elite body punchers, that’s bad news for Kovalev. As 168-pounder Rocky Fielding, an Alvarez knockout victim, told The Athletic, “It wasn’t too bad at the head, but the body was just too painful,” Fielding said. “I’ve never really been hit like that before.”

When asked about the possibility of Alvarez focusing on Kovalev’s body, trainer Buddy McGirt said, “It’s obvious that’s his game plan, because that’s one of his biggest tools, is body punching. And for the record, nobody likes to get hit in the body. … The question is what’s going to happen when Canelo gets hit to the body?” Well, that’s an interesting question.

2) Can Kovalev’s size and power hurt Alvarez? Kovalev has a KO percentage of 76.3, and so yes, there’s a good chance he can buzz Alvarez if he lands cleanly. The problem is that Alvarez’s defense continues to improve, and in the 24 rounds he faced the power-punching Gennadiy Golovkin, Alvarez never wobbled. He’s got a fantastic chin. But Ward has said he wonders if Alvarez will fade in the later rounds because there will be more weight on his frame than he’s used to, and middleweight Jermall Charlo wondered if Kovalev has too much size for him. “The weight and the size with him [leaning] on Canelo, that’ll make a big difference,” Charlo told K.O. Artist Sports. “Kovalev has to bully him and be the bigger man.” Or as welterweight standout Keith Thurman said, via Seconds Out, “You can’t keep moving up in weight and keep fighting punchers. One day, you’re going to take a punch you can’t handle.”

3) Can Alvarez get a decision in Nevada?: Las Vegas has become Alvarez’s town, and as seen in the two controversial Golovkin decisions (where they drew in the first and Alvarez won in the second) and the Erislandy Lara fight from 2014 (when Alvarez won a close decision), the official Nevada judges find it difficult not to give close fights to Alvarez. Making matters even more interesting is that Don Trella, who turned in a controversial scorecard during the first Golovkin fight that kept Golovkin from getting the decision, will also score Saturday’s event. So, it’s fair to ask: If Kovalev doesn’t KO Alvarez, can he get the decision victory from the judges in Las Vegas? According to Main Events’ Kathy Duva, who promotes Kovalev, she didn’t have much of a choice. “As a dynamic of this negotiation, [another location was] impossible,” she said. “We got the fight we wanted; we got the money we wanted. The way to get that money is to go to a place where you can generate it. We’re realists. We asked, as always, for judges who will be fair. We hope that the commission recognizes that we don’t want the names of the judges or the referee to be the story.

“We’re going to be where the crowd is going to be very much pro-Canelo. We know that happens. We know judges are influenced by those crowds, and I can talk a lot simply to that. But what Sergey needs to do is fight like the veteran that he is. He needs to win and dominate round by round. He needs to not go in there head hunting trying to get a knockout. He knows that now.”

The odds have tightened during the past week. At one point, Alvarez was as much as a 5/1 favorite, but lately, more of the money is going toward Kovalev.

Here are some other prop bets from Bet Bind.

According to ESPN, Alvarez is set for a $35 million payday. Kovalev will take home $3 million but will earn a guarantee of millions more.

The only loss of Alvarez’s career came to Floyd Mayweather in 2013, and now that he appears to be entering his prime, Alvarez is getting even better as a boxer. He’s 52-1-2 with 35 KOs.

Kovalev has only won four of his last seven fights, but he looked great in beating Eleider Alvarez in their rematch in February and then survived some tough moments two months ago to stop Anthony Yarde. He’s 34-3-1 with 29 KOs.

I don’t think Kovalev will win this fight, but I do think he’ll make Alvarez go through some scary moments. Maybe he’ll hurt Alvarez with his power. Maybe he’ll tire him out by leaning on him. Maybe none of Alvarez’s power will faze Kovalev. However it happens, Alvarez, at this point in their careers, is a fresher, better boxer than Kovalev. And Alvarez will win a world title in his fourth weight division. Say by unanimous decision in the 116-112 range.

Don’t miss out on a seasonal marketing boost

Everything You Need To Know About CBD Balm

How commercial storage can help you keep your...

Great Ways to Get Your Workers Involved in...

How online casinos have changed over the years

Hair Extensions – What you should know about...

How to choose the right accounting package for...