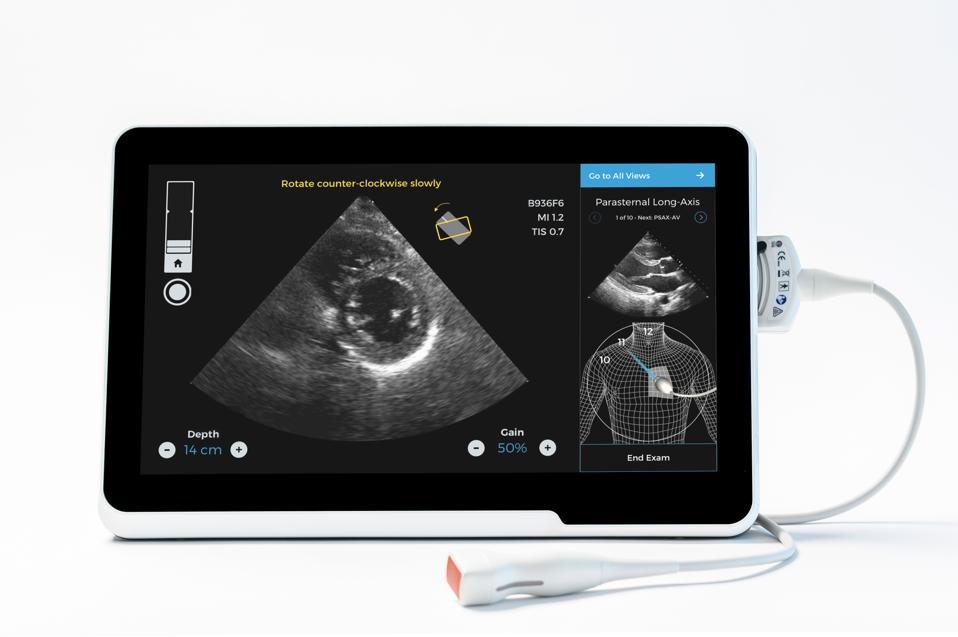 Caption Health’s technology guides the user where to move the probe.

Charles Cadieu is on a mission to vastly expand the number of healthcare providers who can perform heart ultrasounds by guiding them with the help of artificial intelligence software. Cadieu, the cofounder and CEO of Brisbane, California-based Caption Health, says the company is “democratizing” medical imaging by giving registered nurses and others the ability to quickly and easily perform scans that usually require lengthy training.

“We’ve really kind of cracked this problem where our AI empowers these medical providers to perform and interpret ultrasounds,” says Cadieu, who launched the company in 2013, along with CTO Kilian Koepsell. With the close of a $53 million Series B round announced Wednesday, investors are betting Caption Health is going to take off, especially as links between coronavirus and heart damage accelerate the need for faster ultrasound results.

DCVC led the funding round, joined by Atlantic Bridge, Edwards Lifesciences and returning investor Khosla Ventures. It also marks a shift in roles for Cadieu from president back to CEO, following the departure of Andy Page (the former president of both 23andMe and Livongo) after 18 months. Caption Health has raised $60 million to date.

Heart disease is the number one killer in the United States, accounting for around 647,000 deaths each year. A heart ultrasound, also known as an echocardiogram, enables providers to see how the heart is functioning and diagnose and treat various conditions. In February, Caption Health was the first company to ever receive marketing authorization from the U.S. Food and Drug Administration specifically for cardiac ultrasound software. Enabling non-specialists to perform ultrasounds “demonstrates the potential for artificial intelligence and machine learning technologies to increase access to safe and effective cardiac diagnostics that can be life-saving for patients,” Robert Ochs, deputy director of the FDA’s Office of In Vitro Diagnostics and Radiological Health said at the time.

The coronavirus pandemic soon illuminated another key use: helping frontline health workers speed up heart ultrasounds, while also minimizing Covid-19 exposure. The technology can guide the providers attending to the patient to perform the ultrasound instead of calling in in additional technicians to suit up in personal protective equipment. The FDA approved an update in May, and the company says it now has 11 hospital system customers, including Yale New Haven Health in Connecticut and Northwestern Medicine in Illinois.

While Covid-19 has primarily been associated with the lungs, there is growing evidence that the virus can be especially severe, or even deadly, for people with pre-existing heart conditions. With Caption Health’s technology, healthcare providers can “identify changes in cardiovascular function earlier so they can actually intervene,” says Cadieu. The software is compatible with different ultrasound machines and easy to learn. Hospitals pay an annual subscription fee for the software license. Eight nurses without any prior experience used Caption Health’s software to successfully capture diagnostic-quality images on a total of 240 patients, according to data the company submitted to the FDA.

While other companies, such as Butterfly, have focused on how to miniaturize the ultrasound device itself, what makes Caption Health standout is the focus on making a complex procedure easier, says Armen Vidian, a partner at DCVC. “It solves the problem of actually being able to capture those high quality images with turn-by-turn directions, almost as simply as if you’re using Waze for your morning commute,” says Vidian.

Caption Health is the second company founded by Cadieu and Koepsell, who first met 15 years ago at the University of California Berkeley, when Cadieu was a postdoctoral researcher and Koepsell a research scientist both in the field of artificial intelligence. The duo previously founded an image-recognition startup that was acquired by Yahoo! in 2013 for an undisclosed amount.

The latest funding round will mainly be used for the commercial rollout of the technology, says Cadieu, including boosting sales, training and support services. Beyond emergency rooms and ICUs, the company is also exploring uses, such as monitoring heart function in oncology patients to determine whether they can begin certain medications. And looking farther into the future, Caption Health will explore artificial intelligence in scanning for other uses, such as the lungs and abdominals. Another potential target? Getting the software into retail clinics to be used in primary care. “We think that’d be really phenomenal to be able to do medical imaging in those settings,” and to be able to bring the technology to patients without the need for specialists, says Cadieu.