Breaking
A Technology Solution For Muni Bond Disclosure
Five Common Ways To Fund A Small Business...
Your Floss Pick Habit Is Killing The Planet,...
Customer Service Recovery: Six Keys To Turn Complaints...
How Becoming A Learning Organization Is Key To...
IRS Increases Enforcement On Cryptocurrency: What This Means...
Optimus Prime Finally Gets The Diaclone Update He...
No, There Isn’t A Black Hole At The...
The Fed Could Be Repeating This Key Mistake...
Japanese Lawmaker Becomes Billionaire By Selling E-Signature Services...
Communication Lessons From The Presidential Debate
4 Tips For Attracting Your First ‘Dream Client’...
Want To Generate More Sales This Holiday Season?...
Your ‘Harvest Moon’ Moment Is An Illusion: Why...
Launching A Startup Comes Down To Making A...
Google Meet’s Unlimited Calling Will Continue To Be...
Home Business Carl Frampton Vs. Tyler McCreary Results: Decision, Twitter Reaction, And Analysis
Business 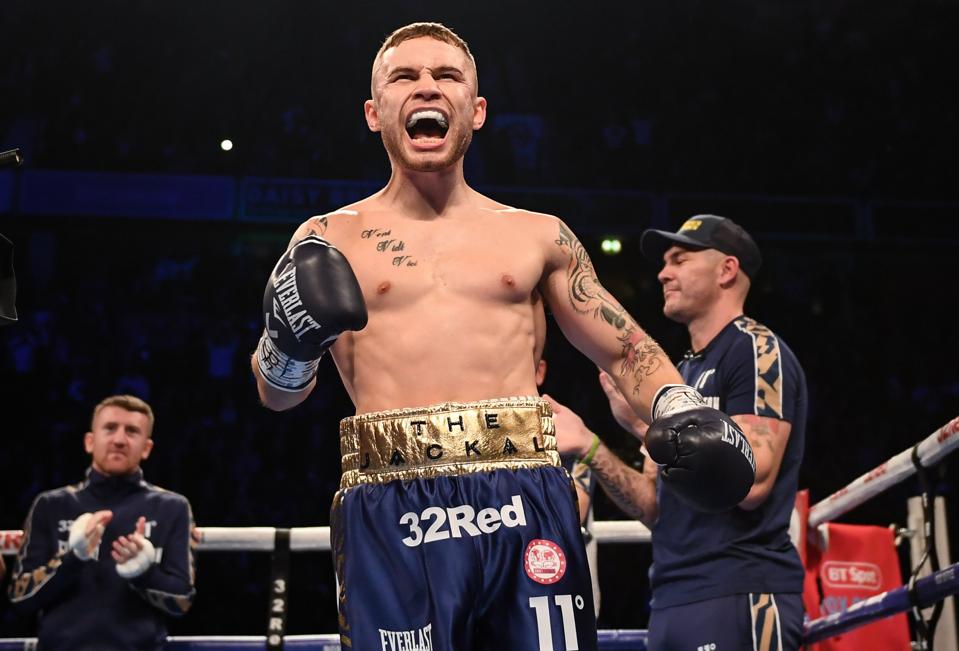 In a pivotal co-main event bout from The Cosmopolitan in Las Vegas, Carl Frampton put on a shut-out performance against an overmatched Tyler McCreary. This fight set the table for the Oscar Valdez vs. Adam Lopez main event.

Frampton scored two knockdowns and swept every round and all three scorecards to the tune of a 100-88×3 landslide.

Here’s how the boxing community reacted to Frampton’s performance:

As you can see from the tweets above, the focus of Frampton’s attack was the midsection. As the smaller fighter, Frampton knew he’d have an opportunity to pound his opponent’s body, and he did just that with two knockdowns from body shots.

This double left hook landed clean in the ninth round and McCreary was forced to take a knee:

McCreary would get to his feet, but it was clear his objective for the remainder of the shifted to survival rather than attempting to actually win the fight.

McCreary showed great toughness. However, he wasn’t busy enough to discourage a motivated and physically fit Frampton. McCreary threw very few uppercuts despite Frampton dipping his head and coming in low to attack the body.

The gap in experience was evident as Frampton came in with more championship rounds than McCreary had boxed professionally. That said, McCreary deserves credit for his physical and mental toughness. From the third round on it was clear he was overmatched. He still stayed in the pocket and didn’t quit. This was especially impressive after the young man ate the double left hook to the body in the next to last round. Lesser men would have stayed down for the 10-count.

Looking ahead, Frampton is seemingly on course to challenge WBO Super Featherweight Champion Jamel Herring for his title. Herring was in attendance and climbed in the ring during Frampton’s post-fight interview. There is talk the fight could take place in Belfast, Ireland where local fans will show up in droves to support Frampton. It could also happen in New York, but Frampton’s fanbase travels amazingly well. Short of happening in Herring’s living room, Frampton is likely to be the choice of the fans in attendance.

We’ll see if that fight is next, but with Frampton linked to Top Rank, there is no reason to think this bout won’t be made.

‘The Moodys’ Review: The Kind of Comedy New Fox Should Be Striving For

How To Drive Faster Energy Innovation With More Women