Breaking
How to Run Nonprofit Marketing Ads
Entrepreneurs Are Bringing Transparency To Home Buying And...
Best Incentive To Get Vaccinated: Money, Messaging, Or...
Page Level Query Analysis at Scale with Google...
How A CIO Can Align IT With Business...
Blogger of the Month: Jo, Girl Eats World
6 Things Women In Business Know That Men...
How to Use First-Party Data for Ad Personalization
Pressing Reset—Putting A Fallen Unicorn Back On Its...
How We Went Viral: Promoting Content with Influencers,...
Blame Olympic Record Price Tag For Return To...
Apple iOS 14.5 Release: Should You Upgrade?
How to Come up with Podcast Topics and...
Why Gaming Gear Company Razer Launched A $50...
Technical SEO Implementations to Increase the Impact of...
30 Brilliant Ways to Market Your Eco-Friendly Shopify...
Home Business Carli Lloyd:“I Want Young Players To Be Inspired By My Journey”
Business

Carli Lloyd:“I Want Young Players To Be Inspired By My Journey” 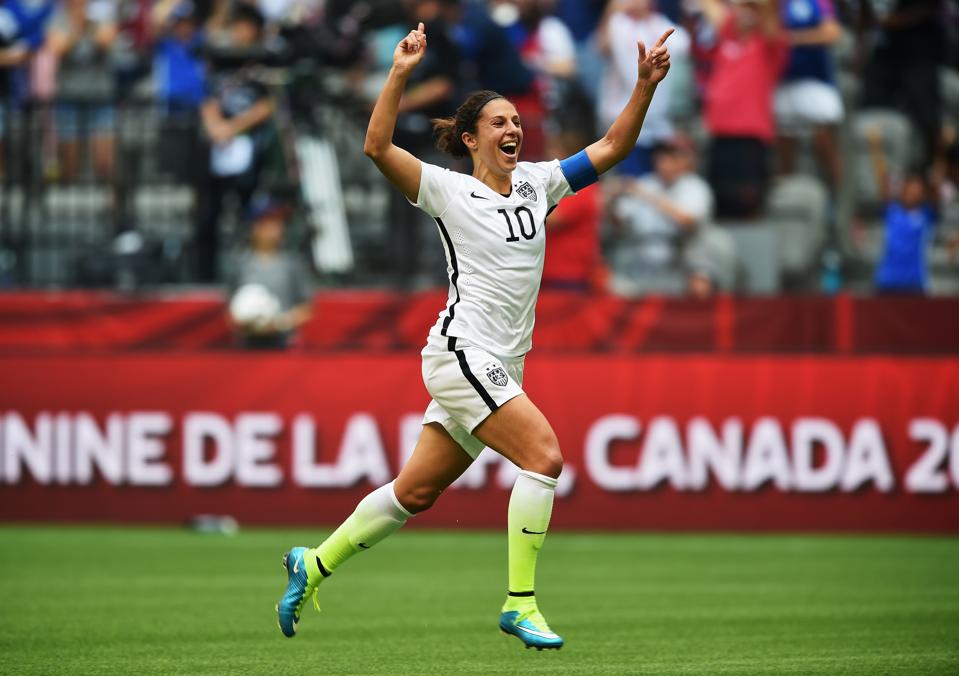 VANCOUVER, BC – JULY 05: Carli Lloyd of USA celebrates scoring her third goal from the halfway line … [+] during the FIFA Women’s World Cup Final between USA and Japan at BC Place Stadium on July 5, 2015 in Vancouver, Canada. (Photo by Stuart Franklin – FIFA/FIFA via Getty Images)

“My goal since the beginning was to become the most complete player in the game. It is up to other people to formulate their own opinion of me” the words of Carli Anne Lloyd, a double World Champion, a double Olympic champion and a double World Player of the Year. A minor knee injury has ruled her out of the ongoing NWSL Challenge Cup but approaching her 38th birthday, Lloyd has no desire to rest on her laurels.

Five years ago today in Vancouver she scaled heights of achievement unparalleled in the sport. Within 15 minutes, 5 seconds of the World Cup Final, Lloyd had scored a hat-trick which not only destroyed her Japanese opponents and secured the United States their third world title but secured her immortality in the history of the game’s greatest showpiece.

The third goal, a shot from the center line, left commentators and fans gasping for superlatives. After two unsuccessful World Cup campaigns, Lloyd now had the only international medal missing from her collection. For most players there would be nothing left to achieve in the game but for Lloyd there is always another challenge. “People approach me all the time about that game and always bring up the long-distance goal I scored”, she admits “but I try not to think about that game too often because I’m still playing and want to focus on what is coming up next while continuing to build the best possible version of myself”.

Four years earlier, it couldn’t have been more different. Against the same opponents in the 2011 World Cup final, Lloyd was one of three United States players to miss their spot-kick in a shoot-out defeat. Speaking on the eve of the 2015 tournament, Lloyd admitted that experience was “a really tough thing to go through. It’s tough, but I think that builds character. There’s nothing I want more than to go to Canada this summer and hold that trophy”. 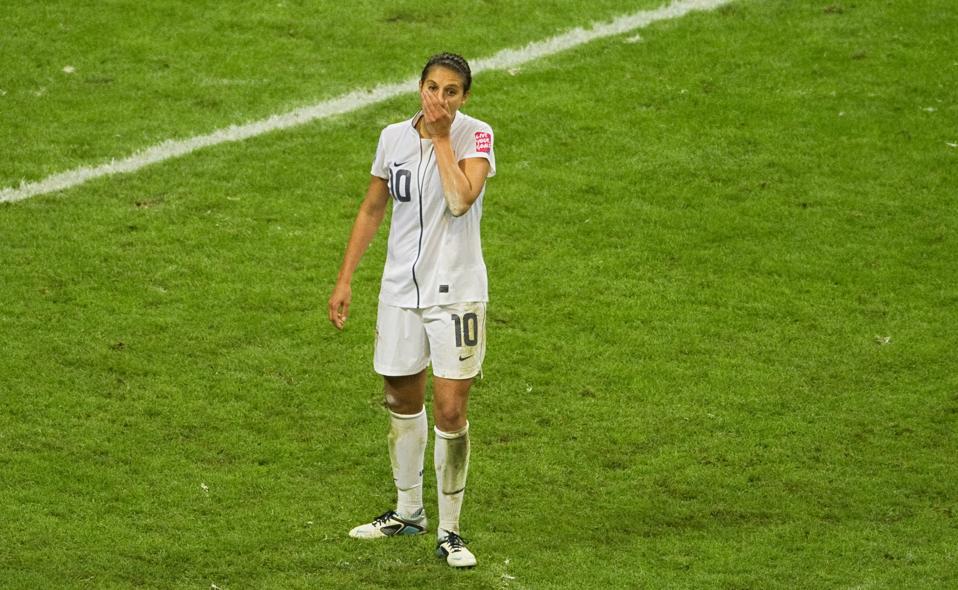 After an indifferent start to the 2015 World Cup in Canada, Lloyd had failed to score. “In the group stages of the World Cup, I knew I could be better and our team knew it could be better. I was playing in a more reserved defensive role and once I was moved to the attacking midfielder position it enabled me to create and play with more freedom and help my team in a more effective way. Fitness played a part in it but so did my determination to maintain my spot as a pure attacking midfielder”.

In her 2016 book “When Nobody Watching: My Hard-Fought Journey To The Top Of The Soccer World”, a New York Times Bestseller, Lloyd admits to dealing with the challenge by “going back to work. By working when nobody is watching, and then working some more”. Five years on, she believes that unquenchable desire to improve still pushes her. “From day one, the goal is to keep adding layer of improvements with each day and this is what fuels me to keep going”.

The move into her more natural position yielded startling dividends. Lloyd scored in successive knockout games against Colombia, China and Germany, to score again in the final would be an unprecedented achievement in the history of soccer.

There, the United States would remarkably face the Japanese again, the two had also contested the 2012 Olympic final, with Lloyd scoring both goals in a 2-1 victory. There was never any chance she would allow this World Cup final to be decided in a penalty shoot-out lottery. “My only goal was to help my team win a World Cup” she recalls. “There was so much riding on that game, and I remember us all feeling ready and charged up!”

Within five minutes, Lloyd had scored twice from almost identical set-piece moves, on both occasions anticipating the play in the crowded Japanese goal-mouth as if predestined to score. “The first two goals were the result of being in the zone. My mind was ready, I was on my toes and anticipated where the ball was going to go and let my instincts do the rest”.

Lauren Holiday added a third goal before Lloyd’s strike for the ages made it 4-0 with barely a quarter of an hour on the clock. “After I scored the third goal, I remember being in a huddle with my team-mates celebrating. The feeling was incredible. It was like we knew we were going to be world champions”. 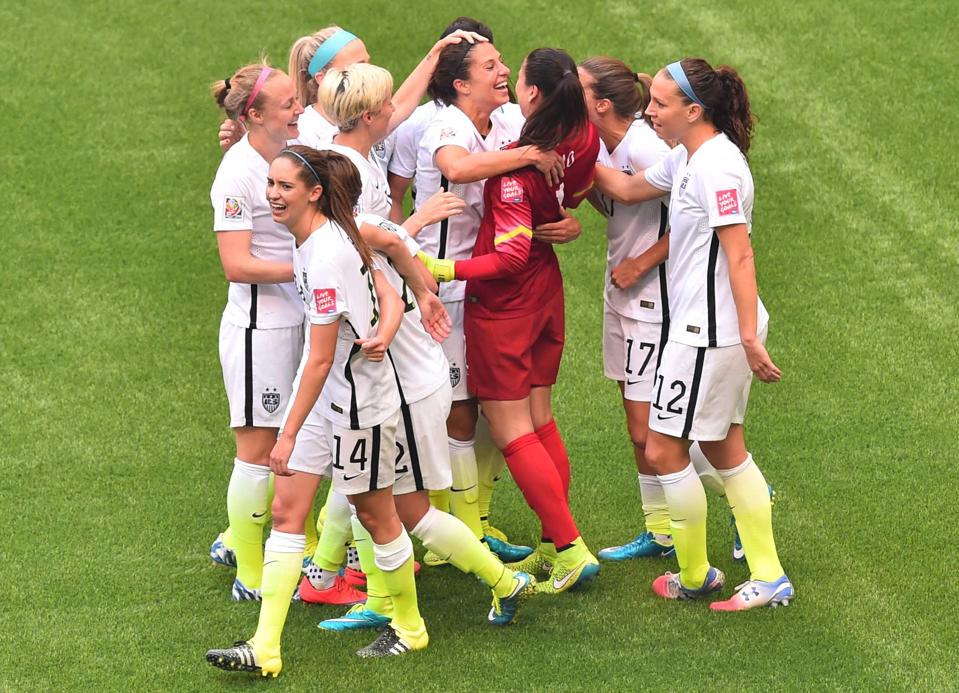 The USA’s Carli Lloyd (C) celebrates a goal with teammates during the 2015 FIFA Women’s World Cup … [+] final between the US and Japan at BC Place Stadium in Vancouver, British Columbia on July 5, 2015. AFP PHOTO/NICHOLAS KAMM (Photo credit should read NICHOLAS KAMM/AFP via Getty Images)

The remaining 75 minutes turned into a coronation party for the American fans in the sold-out crowd. The final winning margin of 5-2 is the most decisive in the history of any World Cup. Lloyd remembers that “the 2015 World Cup Final was very special to me for a number of different reasons. I felt rewarded for all the hard work I had put in and it stands out in terms of how good our team really was on the day”.

Lloyd and her world champion team-mates should now be preparing to win the Olympic soccer tournament in Japan but the postponement of the Tokyo Games until 2021 means the Sky Blue midfielder will be a week past her 39th birthday when the first match is played. Already a double Olympic champion, Lloyd is undeterred, viewing the break as an opportunity gained rather than lost. “Having the Olympics postponed for another year is giving our team more time to learn from Vlatko (Andonovski). Personally, it has given me the opportunity to tweak my training program and get ready for the year ahead”.

The opportunity to join former team-mates Christine Rampone, Heather Mitts, Heather O’Reilly and Shannon Boxx as a three-time Olympic Gold Medalist is there for a player who continues to drive herself relentlessly in her pursuit of greatness. “I just want to be remembered as a player that never gave up on her dream and proved that with hard work, sacrifice and dedication anything is possible. I want young players around the world to be inspired by my journey”.