Carlos Ghosn’s daring escape from Japan by private jet has so far raised more questions than it has answered.

Was the former Nissan CEO hidden in a musical equipment case when he left the country as is being reported? Was he listed under a false passport, perhaps wearing a disguise of some sort? Was there anything abnormal about how his flight was handled exiting the country? 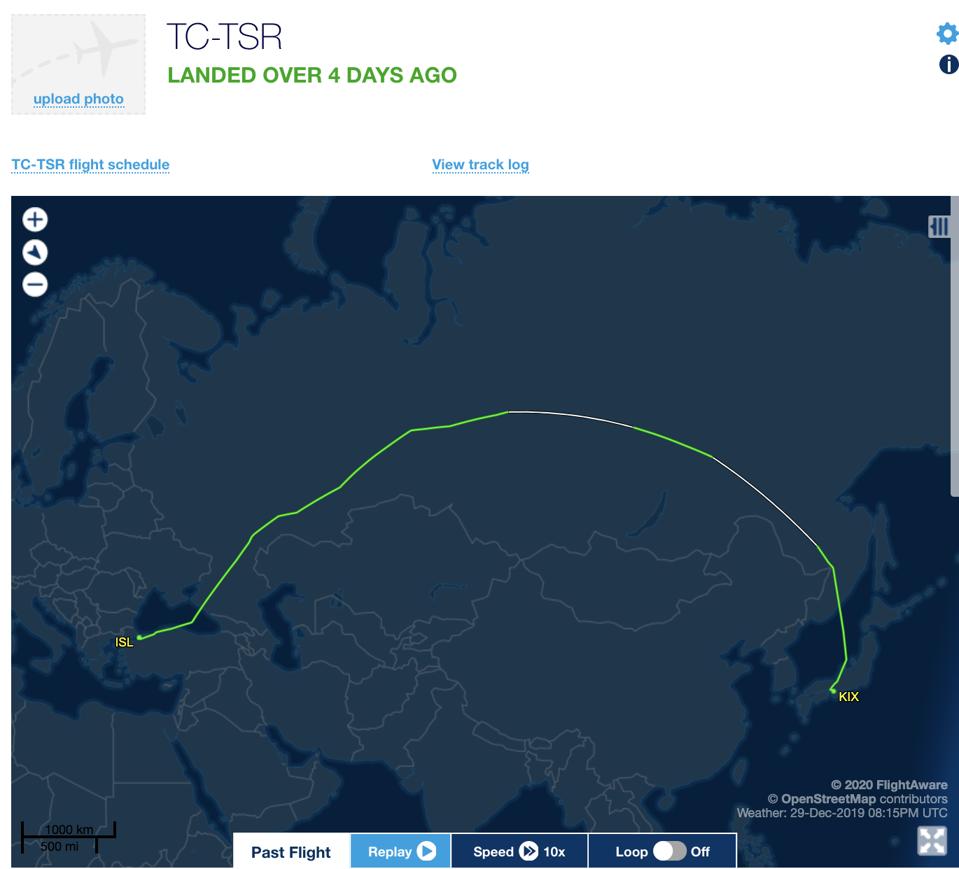 The flight that took Carlos Goshn from Japan to Turkey first headed north through Russian airspace … [+] before turning to the west and then descending over the Black Sea.

According to Corporate Jet Investor, he was aboard a Global Express registered in Turkey with the tail number TC-TSR.

One industry source with knowledge said the airplane is owned by TOA Aviation, a company based in Madagascar and division of Groupe Sodiat.

It had been delivered to Qatar Executive new in May 2004. Then in July 2018 it was sold to STE Havacilik, which leased it to MGN Jet, the company that was managing and operating it for Ghosn’s flight, although in August 2019 the aircraft was sold again, this time to TOA.

According to MNG, there is VIP seating for 13 people. Additionally, four club seats can lay flat for sleeping and there is a three-seat divan that can also be converted to a bed.

It stopped for just over an hour in Dubai, where according to a report in The Wall Street Journal it picked up two American security contractors.

The private jet terminal in Kansai where Carlos Goshn may have transited, perhaps in a musical … [+] equipment case.

At Kansai Airport, there is a 24-hour business aviation terminal that according to its website provides a private security gate, customs, immigration and a quarantine (CIQ) area, plus parking area, lounge, meeting room, restroom and smoking room.

The brochure offers, “You can treasure the wonderful time you spend here.”

The Journal reports an airport spokesperson as saying luggage for private flights goes through the same inspections as passenger aircraft although VIPs are sometimes exempted.

An aviation executive said in Japan scrutiny of luggage on international flights by private jets varies widely and is often based on the discretion of the inspectors on duty. The fact the jets exterior still carries the colors of Qatar Executive, a reputable operator, might have made it less of a target. 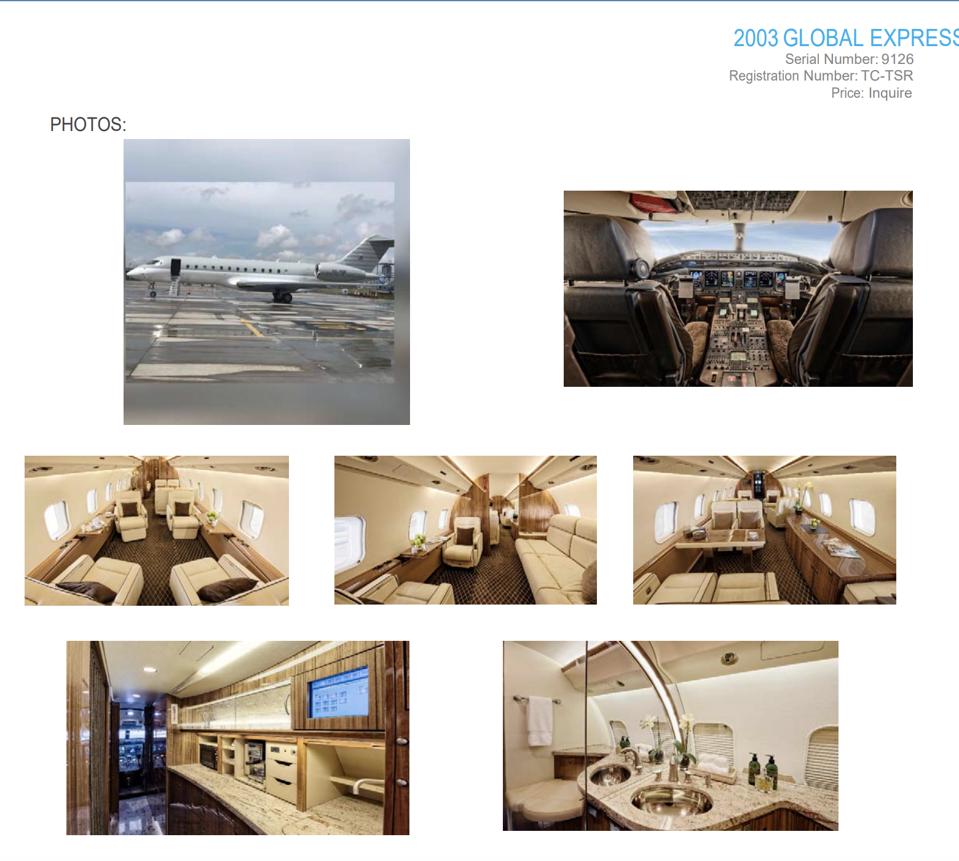 The Global Express Carlos Gohsn used to escape Japan to Turkey had a white and gray exterior, … [+] according to a sales brochure from its charter operator.

FlightAware indicates the flight with Ghosn departed at 11:10 PM local time and flew north crossing into Russia before eventually heading west and then southeast staying in Russian airspace between Ukraine and Kazakhstan. It then made its final trek to Istanbul across the Black Sea to the west of Sochi.

It landed in Istanbul at 8:26 AM local time after flight time just over 12 hours. Its path mirrors that of TK 53, a daily flight from Tokyo to Istanbul operated by Turkish Airlines.

Ghosn’s flight was about 40 minutes behind the jetliner, so it’s possible during the long night pilots between the two planes may have even spoken to each other as they overflew Siberia.

In Istanbul, reports say Ghosn was transferred to another aircraft managed by MNG, in this case a 2010 Bombardier Challenger 300, whose owner is listed as Halk Leasing.

The most recent flights on the Challenger, according to FlightAware date back to October.

Aviation International News reported in addition to two handling agents and a cargo worker, the four pilots who flew Ghosn have also been arrested.

MNG has said they had no idea that Ghosn was aboard the charter flights they operated.

It issued a statement stating it had filed a criminal complaint concerning “the illegal use of its jet charter services in relation to Ghosn’s escape from Japan.”

It said it had made “two leases (that) were seemingly not connected to each other.”

It added, “The name of Mr Ghosn did not appear in the official documentation of any of the flights,” and then also noted, “The jets did not belong to but were operated by MNG Jet.”

It said, “One employee of the company, who is under investigation by the authorities, has admitted having falsified the records. He confirmed that he acted in his individual capacity, without the knowledge or the authorization of the management of MNG Jet.”

One aspect of the story that has yet to be covered is the owners of the jets, and what they might be facing.

There are no apparent connections between Gohsn and either of the companies listed as owners. For example, Sodiat owns car dealerships in Madagascar, but neither seem to sell either Renault or Nissan vehicles, the two manufacturers Gohsn was running.

Neither seem to have any business activities in Japan, which could be a good thing for them. Attempts to confirm ownership via the companies as well as MNG were unsuccessful.

However, if they do own the planes that flew Gohsn, or for whoever does, they may want to get a lawyer…fast.

At least that’s what two aviation attorneys say. At a minimum, it is likely the two jets will be impounded by Turkish authorities if they haven’t already, at least during the initial stages of the investigation. The immediate impact would be loss of charter revenue.

David M. Hernandez of Vedder Price is a former FAA prosecutor. He says, for the jet owners, “They should be hiring lawyers in Japan and Turkey right away to figure out what risks they have.”

Chad S. Roberts is one of only 38 lawyers certified as an expert in Aviation Law by the Florida Bar Board of Legal Specialization. He says much like shipping, Japan could use international treaties to seize the jets.

He adds if either of the airplanes used by Gohsn were financed, the lenders could be at risk as well. “The Sargent Shultze defense, ‘I know nothing,’ doesn’t work anymore,” he says, pointing to Know Your Customer laws in banking.

In the world of private jet charter, in many cases owners of the airplanes want to approve flights.

The expectation is both Japanese and Turkish authorities will want to question the jet owners to see what they knew about the charters and if there are any ties to Ghosn.

So what can an aircraft owner that puts his or her private jet on the charter market do to protect themself?

Roberts says he regularly advises clients to contractually limit the geography of where they will allow their management company to operate charter flights.

At the same time, he notes lucrative charters of large jets regularly include places in Africa and CIS where big money is at stake and there is a lack of commercial flights.

Most importantly, aircraft owners should pay particular attention to the reputation and track record when hiring a company to manage their aircraft. “You need to do your due diligence.”

Another risk reducer is to limit the management company’s charter sales to a short-list of regular and well-known charter customers. “A construction company that’s building a new hospital in Ohio and has to fly their team in twice a month for meetings…That’s the ideal customer,” Roberts says.

Insurance brokers can also be a good resource. “Their experience with risk is exponentially bigger than the owner. In an actuarial sense they can advise you on risk profiles (of where you should allow your jet to be flown on charters).”

He adds owners should also carefully understand permissions and restrictions of their insurance policies to make sure any charters their management company sells comply.

For the owners of both jets, their financial worries could be significant.

In the case of the aircraft that ferried Gohsn out of Japan, Controller lists a 2001 Global Express on the market for $9.5 million. A 2013 Challenger 300 is for sale at $12 million.

Nine Essential Skills You Need To Succeed In...

The Real Story Behind The PNC-Venmo Clash

Tropical Cyclone Landfalls Around The World Over The...