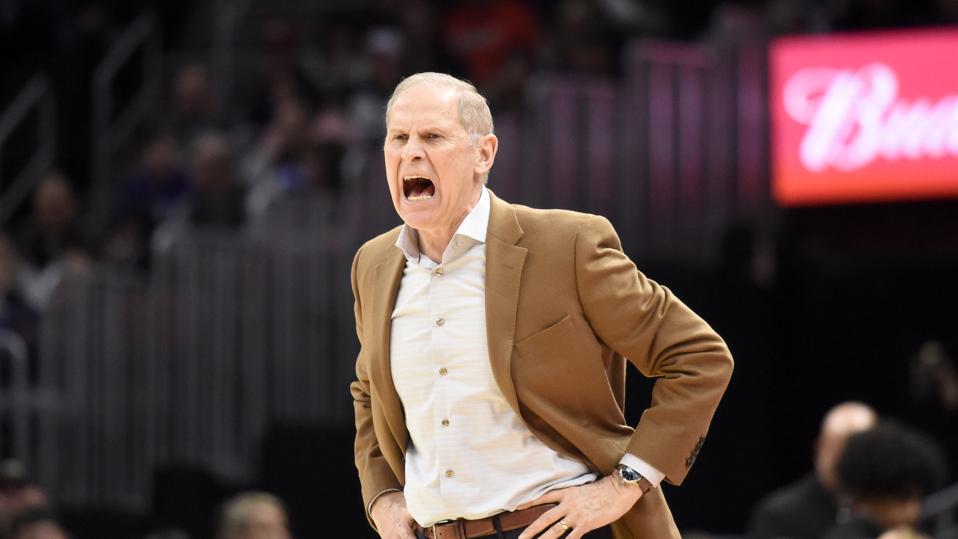 CLEVELAND, OHIO – FEBRUARY 12: Head coach John Beilein of the Cleveland Cavaliers yells to his … [+] players during the second half against the Atlanta Hawks at Rocket Mortgage Fieldhouse on February 12, 2020 in Cleveland, Ohio. The Cavaliers defeated the Hawks 129-105. NOTE TO USER: User expressly acknowledges and agrees that, by downloading and/or using this photograph, user is consenting to the terms and conditions of the Getty Images License Agreement. (Photo by Jason Miller/Getty Images)

As the NBA All-Star game reached its peak on Sunday night, John Beilein’s Cavaliers tenure hit its nadir. Both The Athletic and ESPN reported that Beilein’s future with the Cavs is uncertain during the game’s fourth quarter.

The Athletic’s report said Beilein will not remain as the Cavs’ coach beyond this season. ESPN’s said Beilein may have already coached his final game. The latter should probably be the preferred option.

Beilein has already struggled to connect with his players. If he coaches games after this news leaks, this situation could get ugly.

Some would argue it already has. The Cavs (14-40) have the second-worst record in the league, and the only team worse than them, (the Warriors) beat them by 19 points on Feb. 1.

To be fair to Beilein, the roster he inherited wasn’t positioned to win this year. It was young and lacked defensive talent. Its best player, Kevin Love, has been unhappy all season.

On the other hand, Beilein earned the blame he wore for the “slugs vs. thugs” fiasco. The preseason concerns about a lifelong college coach connecting with an NBA locker room were proven correct LINK. If Beilein, 67, decides to continue coaching, he’s probably best suited for the college game.

On the Cavs’ end, their next coach will be the sixth in their last seven seasons. Ty Lue, the most successful one, was fired after six games in 2018 — presumably because he couldn’t win with a roster the front office overestimated (it didn’t help that the 2018 Cavs were ravaged by injuries).

According to the Athletic, current Cavs assistant J.B. Bickerstaff is the top candidate to become the interim head coach, and he will also be considered as Beilein’s permanent replacement. Bickerstaff’s experience coaching the young Grizzlies last season makes him a qualified choice.

Whoever the Cavs choose as their next coach will inherit and intriguing roster. Rookies Kevin Porter Jr. and Darius Garland have shown potential this season, and the Cavs just acquired two-time All-Star Andre Drummond for cheap. Drummond happens to share an agent with Kevin Love.

That’s a core that can be a part of a competent NBA team. And while competence may not be the best recipe for finding a future star through the draft, it’s also preferable than the dreck Cavs fans have watched this season.

Competence is no guarantee in Cleveland, though. There’s little recent LeBron James-less history that supports giving the Cavs any benefit of the doubt. They’re are 130-363 under Dan Gilbert without LeBron James.

That record probably wasn’t improving with Beilein at the helm, which is why his exit is a positive step. There’s value in knowing when to end an experiment that clearly wasn’t working.

The next step will be a crucial one. The Cavs need someone to bring consistency to the franchise. Because right now, the only constant is incoherence.

If They Are So Alarmed By Climate Change, Why Are They So Opposed To Solving It?

England In Wicketkeeping Crisis Of Own Making: Bairstow,...