Home Finance CBO: 10 Years To Restore Economy. So Why Are Stocks Up 40%?
Finance 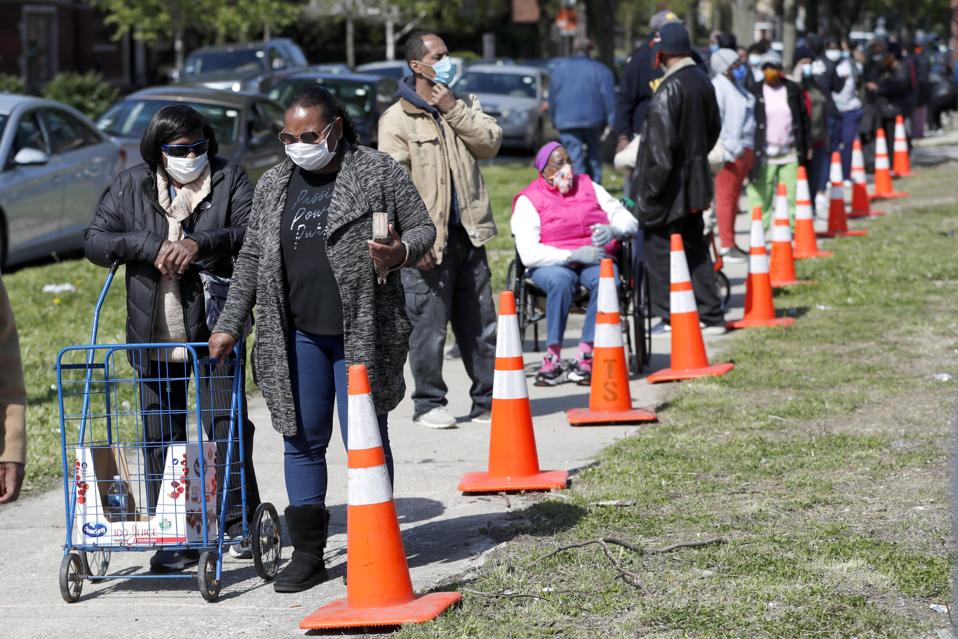 In this Tuesday, May 12, 2020, photo, residents from all walks of life line up for a food giveaway … [+] sponsored by the Greater Chicago Food Depository in the Auburn Gresham neighborhood of Chicago. Across the country, food insecurity is adding to the anxiety of millions of people, according to a new survey that finds 37 percent of unemployed Americans ran out of food in the past month, while 46 percent worried that they would. The nationwide unemployment rate on Friday was 14.7 percent, the highest since the Great Depression.(AP Photo/Charles Rex Arbogast)

If you’re looking for an explanation of why stocks have risen 40% from their March 23 low, don’t expect insight from the state of the U.S. economy.

The real reason for that stock pop is elusive — after all the people and computers who control the biggest volume trades that drive stock prices don’t disclose their reasoning.

If there was a link between the economy and stock prices, the markets would be way down. That’s because economic experts see the U.S. economy in the worst condition since the Great Depression.

Back then it took 25 years for stocks to recover from their pre-crash level. If you think you’ll need the cash you’ve invested in stocks in the near term, you might consider selling into what looks to me like a dead cat bounce. Or you could bet on the biggest winners in the Covid-19 economy.

45 Million People Could Be Out Of Work — How Many Will Get Jobs And How Long Will It Take?

Since March, 40.8 million people have filed for unemployment. I would not be surprised to see that number reach 45 million — which represents 27% of the 164.6 million peak U.S. labor force this January.

Moody’s MCO expects the problem to worsen in the next several months. As Moody’s Analytics chief economist, Mark Zandi explained in a June 3 interview, “I expect two million more [unemployment filings] in June, and 1 million more in July and August. After that, barring a severe second wave of the virus and/or a premature pull-back in monetary and fiscal policy support, I expect [things to begin to normalize] in June, and settle down to several hundred thousand per week.”

Another economist, MIT professor Thomas Kochan, expects the unemployment numbers to worsen more slowly — though he declined to quantify his outlook. As he said in a June 3 interview, “If there is not a second wave of illness that requires more closures, I’d expect the number of new unemployment filings to decline somewhat in the months ahead.”

Both economists see the unemployment rate reaching close to the level reached at the worst of the Great Depression — 25% in 1933. Zandi sees a 20% May unemployment rate — but expects a decline to 10% by September where he expects unemployment to stay until “there is a vaccine or effective treatment for the virus that is widely distributed and adopted.”

How Much Will the U.S. Economy Shrink?

Since about 70% of economic growth comes from consumer spending, it stands to reason that people without jobs — who are drawing on temporary government relief to pay their bills — will cut back on spending.

That means less demand for products and services and more pressure on leaders to cut jobs to preserve their capital. It is uncertain where this vicious cycle will bottom out.

Moody’s does not expect the U.S. economy to shrink much over the next several years. If Zandi is right, the current economic contraction would be far less severe than the Great Depression which saw a 50% drop in GDP.

This is based on an optimistic set of assumptions. “I’m assuming there will not be a serious second wave of the virus and that there will be a widely and adopted vaccine or effective treatment by this time next year,” he said.

The Congressional Budget Office if far more pessimistic. According to the Wall Street Journal, the CBO expects the U.S. GDP will lose a cumulative $7.9 trillion over the next decade relative to its January 2020 projections — and it will not recover to that level until the fourth quarter of 2029.

Which Groups Of Workers Will Suffer The Most?

Covid-19 has created winners and losers. Zoom Video and Amazon AMZN are among the obvious winners. Other winners include companies providing information security as work shifts from offices to employees homes.

Those who are worst off are the ones whose livelihood depends on people spending time in close physical contact. As Zandi explained. “There will continue to be a restructuring and job loss in the brick-and-mortar retail, travel, and restaurant industries.”

It will be difficult for such workers — particularly in less populated regions — to find work. “Workers with lesser skills and education losing their jobs in retailing, leisure and hospitality, and in the travel industries will have a more difficult time getting back to a job, particularly if they leave in small urban and rural areas where there are fewer job opportunities. Mobility has declined substantially in recent years, for a host of reasons, and the COVID-crisis will further impair mobility,” he said.

Kochan expects the hardest hit unemployed to be those with the fewest skills. “The rehiring will be slow and selective, favoring more educated and skilled workers. The evidence from the last deep recession is that firms invested more in new technologies and that favored skilled workers in the re-employment process. I expect this to be a stronger/bigger trend this time.”

He wants government to step in. To counter the pain on “low wage-lower skilled workers…government [should] be very proactive in investing in human services, health care, and infrastructure to bring the economy and jobs back faster and on a broader scale,” he said.

These analysts did not discuss the problems being suffered by those who pay rent and mortgages and those who finance the purchase of residential and commercial real estate. “Nearly half of commercial retail rents were not paid in May,” according to the Washington Post.

Starbucks SBUX , Ross Stores ROST and T.J. Maxx are among the companies the Post cited that were struggling to pay rent. That is bad news for landlords, commercial real estate investors, property management companies, banks and private investors that finance real estate and state and governments that depend on property taxes.

Zandi — who does not forecast S&P 500 earnings — is more pessimistic. As he said, “I don’t expect economy-wide corporate earnings to fully recover until mid-2023. In addition to the hit to sales, the COVID-crisis is also putting significant pressure on most businesses’ pricing power. Cost structures are also higher as some businesses need to change their operating models due to the need for more social-distancing and shifts in global supply chains.”

Zandi attributes the rise in stock prices to the Federal Reserve Bank’s support. As he said, “[Due to] the Fed’s willingness to backstop much of the financial system, investors’ tail risk is significantly diminished. The stock market reflects the strength of a few companies [that are getting larger], and not that of the broader economy.”

If you want to buy stocks — stick with these winners. The question is how long they can continue to grow as the recovery from the pandemic drags on over the next decade.

Trade Deal: A Reason To Buy?

Should Your Company Play Offense Or Defense During...

Why The Clorox Rally Looks Overdone

How To View An “Insulin Resistant” Economy