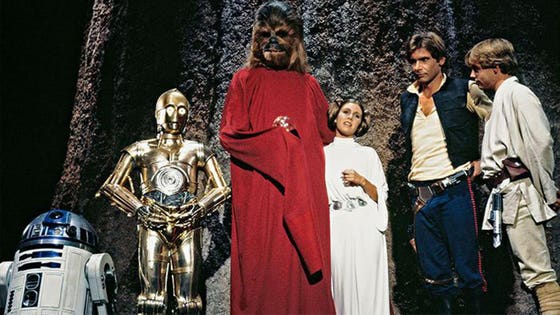 Now that the holidays are upon us, you’re probably bursting with cheer and full of goodwill to men. This will put a stop to that.

Every December for well over a decade I’ve celebrated the season by posting the worst piece of Bantha poodoo to ever soil U.S. airwaves, the famously disastrous Star Wars Holiday Special. Some call it a tradition. Others say it does to Christmas what the Death Star did to Alderaan.

Originally broadcast on CBS in 1978 —and then never shown again— the Star Wars Holiday Special was produced by George Lucas when he was riding high off the release of the first Star Wars movie, and looking to make a few extra bucks with two painfully awful hours of cornball humor, slipshod animation and embarrassing performances.

If Yoda is correct and “the greatest teacher, failure is,” then George Lucas must have earned a PhD in storytelling after producing this mess.

The plot follows Chewbacca’s attempts to reunite with his family on the Wookiee homeworld Kashyyyk for “Life Day,” complete with endless scenes of his wife Malla, son Lumpy, and father Itchy groaning at each other in Wookieespeak, sans subtitles. It stars the full core Star Wars cast, with the notable exception of Alec Guinness, who presumably had the good sense to read the script first.

Other talent on parade includes guest stars Bea Arthur, Art Carney and Harvey Korman, who appear as a cantina bartender, Kazoook trading agent and sniveling space drunk, respectively. It only gets weirder when Jefferson Starship performs as a holographic rock band.

Lucas was said to be so ashamed of this program that he has systematically hunted down and destroyed every copy he could get his hands on. Despite his efforts, enterprising fans can locate low-quality bootlegs at science fiction conventions and on the Internet —like right here. Hit the full-screen button and enjoy!

The Real Black Friday: The Incredible Sights To...