Breaking
The Impact of Internships in Marketing
3 use cases of chatbots for critical services
How To Make Working From Home Appeal To...
Tips on How to Design an Office Space...
4 Tips To Help Build Amazing Customer Relationships
How Are US Pension Funds Responding to the...
Benefits of second-hand cars for your business
4 Reasons Why Your App Needs To Undergo...
Your Guide to Online Marketing
How to find a Solicitor in London
5 car tyre and safety tips for a...
Everything You Need to Know About Corporate Social...
Is Adaptive Leadership the Key to Motivating Employees?
Why business events are set to return with...
Business events set to return with a bang!
Expanding Internationally: 5 Things to Consider for eCommerce...
Home Sport Celtics’ Kemba Walker Ready To Go After Scary Injury: ‘We Feel Very Fortunate’
Sport 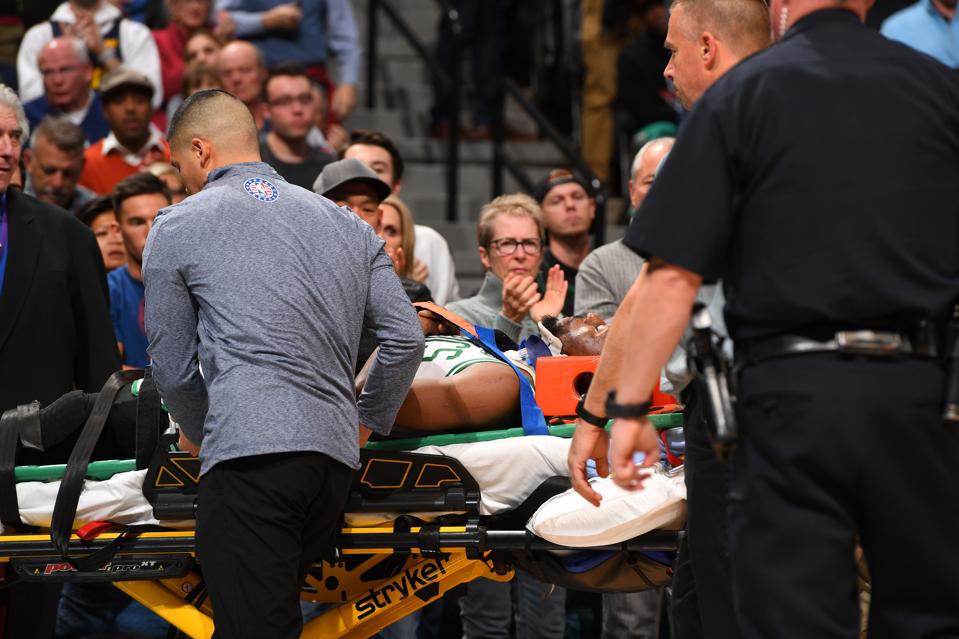 DENVER, CO – NOVEMBER 22: Kemba Walker #8 of the Boston Celtics is injured against the Denver … [+] Nuggets in the first half at Pepsi Center on November 22, 2019 in Denver, Colorado. NOTE TO USER: User expressly acknowledges and agrees that, by downloading and/or using this photograph, user is consenting to the terms and conditions of the Getty Images License Agreement (Photo by Jamie Schwaberow/Getty Images)

BOSTON – All in all, the Celtics got pretty lucky with a potentially devastating injury from last weekend. Considering the way their luck has gone in the past two years, that’s progress of sorts.

Certainly, it’s not often that a minor neck sprain prompts an NBA team to bring out the club doctor. But the neck injury suffered by point guard Kemba Walker in the final game of Boston’s five-game road trip created such a stir that the Celtics brought out Dr. Tony Schena here at TD Garden to address the situation.

Walker suffered the neck injury when he lost balance and ran, head-first, into teammate Semi Ojeleye in the second quarter of Friday night’s loss in Denver. The injury appeared to be serious because Walker was not moving in the immediate aftermath of his fall to the floor and the Nuggets’ medical squad brought out a back-stabilizing board and a collar for Walker’s neck.

“When he landed, he basically had numbness and tingling in his hands and you can imagine that gave him a little bit of a shock,” Dr. Schena said. “He was kind of freaked out by that. He needed a couple seconds to collect himself. He never lost consciousness. He stayed on the floor mostly as a medical precaution. Because the neck was involved and because he had numbness and tingling in his hands they took full spine precautions.”

Walker was wheeled out of the Pepsi Center and brought to a level-1 trauma center. There, he was given about as thorough an exam as possible—first a neurological evaluation, followed by a full set of X-rays and an MRI, then another set of X-rays to ensure that the structures were stable in his neck.

But, remarkably, everything looked normal.

“It always looks scary and sometimes it ends up being a problem,” Dr. Schena said. “You can’t judge by mechanism alone how bad an injury is going to be. Some people have a relatively simple mechanism and it ends up being a bad injury, some people have what looks like is going to be a bad injury but they do quite well. Luckily Kemba was in the second category.”

He flew back to Boston with the team. But the other concern with Walker’s injury was a concussion, though he said he had not lost consciousness. Still, he was put into the NBA’s concussion protocol, which started with a full cognitive review by team doctors and a light workout over the weekend, then an outside examination done by a doctor at Massachusetts General Hospital.

Walker passed all aspects of the concussion protocol except for the requirement that he participate in a practice, which he is scheduled to do on Tuesday.

Because of that, he was not able to play in Monday’s game against Sacramento. Marcus Smart started in his place and the team brought up G-League point guard Tremont Waters. That’s not to say Walker did not try to get coach Brad Stevens to skip out on the protocol and put him in.

“I would say he has never not lobbied to play,” Stevens said, smiling, when asked if Walker had pushed to be put into the lineup.

Walker had a neck problem during the summer in his time with Team USA, but this injury was completely unconnected. If all the injury costs is one game, Stevens has reason to heave a sigh of relief. He has seen his team put through the wringer when it comes to injuries to star players in the past two seasons.

Two years ago, the Celtics lost star free-agent signee Gordon Hayward for the year when he suffered an ankle injury on Opening Night. In March of that year, point guard Kyrie Irving went out with a recurring knee problem that required surgery to repair. Neither appeared in the postseason.

“Every situation no matter how bad it looks, is different,” Stevens said, “and we feel very fortunate that it’s not a long-term thing and there’s no issues there. I’m thankful, like Doc was, for how it was handled in Denver, I think that’s the right way to do things. Kemba’s itching to play. Kemba always wants to play, he always wants to be out there, he loves to play.”