Breaking
Everything You Need to Know About Corporate Social...
Is Adaptive Leadership the Key to Motivating Employees?
Why business events are set to return with...
Business events set to return with a bang!
Expanding Internationally: 5 Things to Consider for eCommerce...
How the Machine Shop Is Going Digital in...
Sustainable Food Packaging Is Helping the Hospitality Sector...
Top 5 Investment Practices To Make More Money...
Managing IT Requirements for SMEs: 5 Aspects that...
How To Build a Successful Luxury Brand In...
Finding The Best Google AdWords Consultant for Your...
8 Top Tips To Help Your Agricultural Business...
Three Reasons Why Office Décor and Design Are...
Looking To Improve Efficiency In Your Business? Here’s...
AI and machine learning for business
How Social Media Changed the World
Home Technology CEOs Worry Culture Holding Back Innovation
Technology 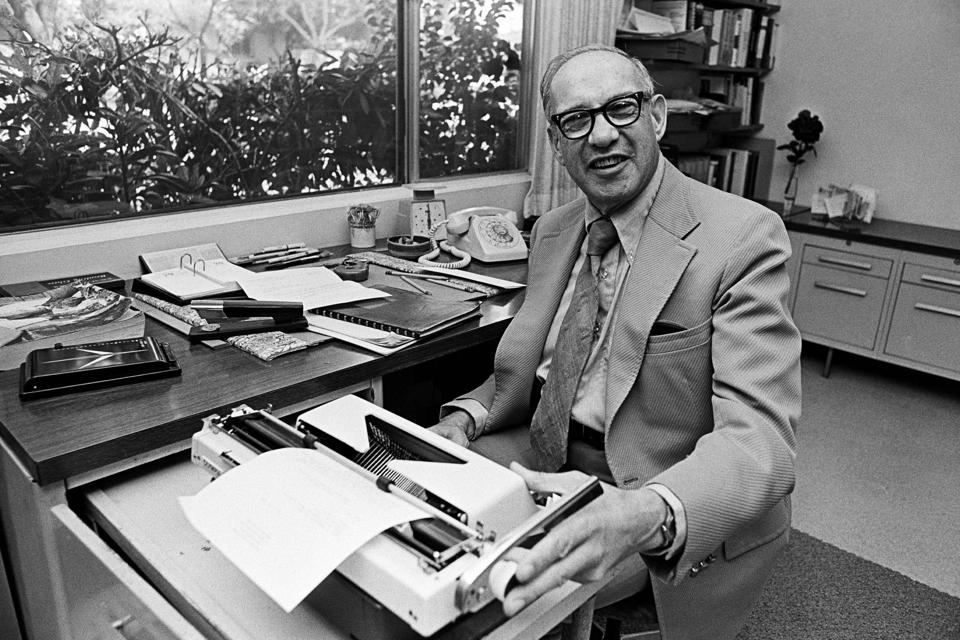 CLAREMONT, CA – 2010: Economy Professor Peter Drucker, a Presidential Medal of Freedom winner, … [+] poses at his desk in this 1975 Claremont, California, photo taken in his office. (Photo by George Rose/Getty Images)

“Culture eats strategy for breakfast” is a favorite line attributed to the late management guru Peter Drucker. It means that a great plan are likely to fail if the organization’s mindset and workforce are not aligned with it.

The world’s CEOs apparently are getting the message.

Developing a more creative culture was ranked the third most-important “hot button” internal issue in The Conference Board’s latest annual survey of global business leaders. The canvass of nearly 750 corporate CEOs and almost 800 other C-suite executives by the non-profit think tank was released this morning. 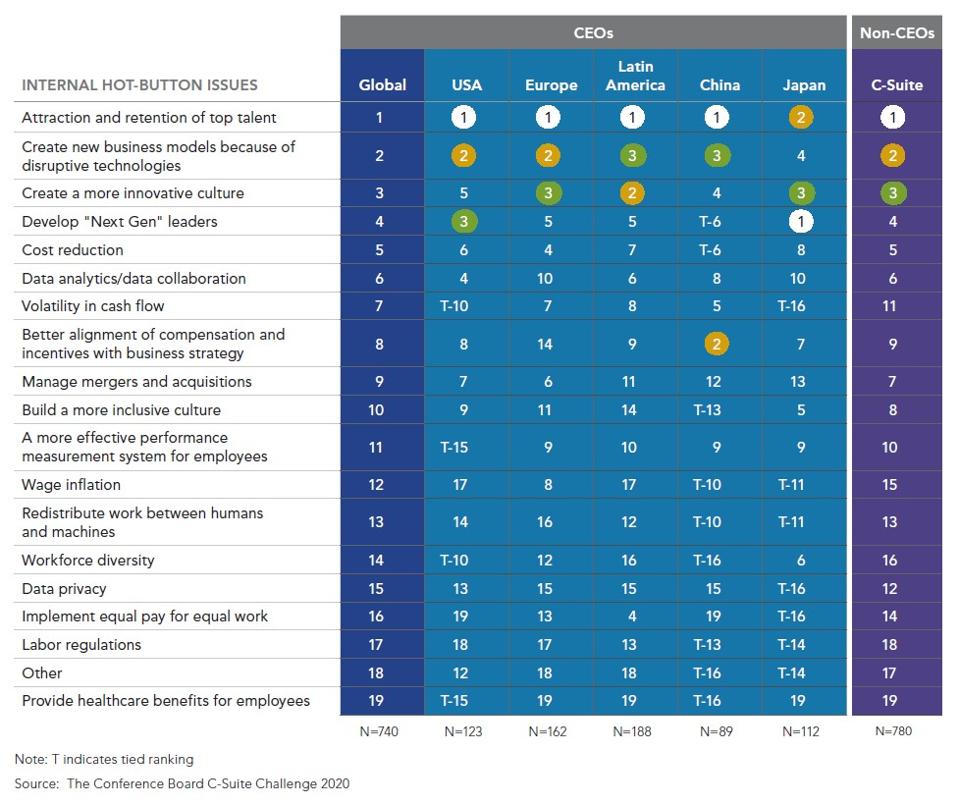 Culture-related issues dominate the internal concerns of business executives in the latest survey by … [+] The Conference Board.

This is a sharp turnaround from the previous year’s Conference Board survey. In the one released in January 2019, CEOs said they were “most confident that they have the right culture in place to succeed in 2025.” American CEOs were more confident than their counterparts around the globe that their organizations had the right culture.

This year, culture-related issues were the top four internal concerns among the 19 listed by the execs. No. 1 was attracting and retaining top talent, followed by creating new business models to address disruptive technologies. Then came concerns about creative culture followed by the desire to develop “Next Gen” leadership.

Each of the top four internal issues requires developing the right organizational culture to succeed. And, developing that culture needs an effective and ongoing internal communications effort that aligns employees – from senior leadership to new hires – with the desired vision and mission.

It is likely that most of the headlines about the latest Conference Board survey will focus on external concerns. The execs said their biggest worries outside their organizations were the potential for a recession in 2020, uncertainty about global trade, more-intense competition, global political instability and a tight labor market. 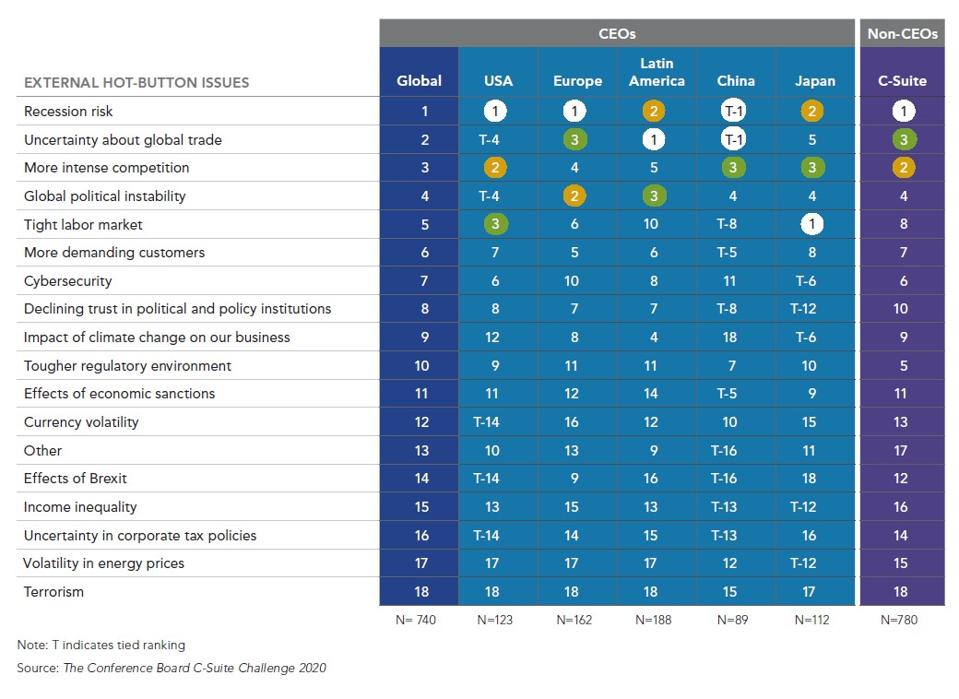 But you could argue that addressing the internal concerns – ones leadership has some sway over – will be more important over the long run.

“A strong culture of innovation energizes and enables a company’s innovation performance,” the Conference Board said in its report on this year’s survey. “In turn, continuous innovation keeps organizations and their brands relevant and refreshed during periods of intensifying competition and frequent market disruptions and can serve as an effective recruitment and retention tool for quality talent. It’s all about vision and looking forward, even if the ‘next big thing’ means large-scale internal disruption.”

Two of the top external concerns – addressing more-intensive competition and how to attract and retain top talent in a tight labor market – are directly impacted by culture. And, organizations with the best cultures will be better able to weather a recession if it comes and to deal with the uncertainties of global upheaval.

The Conference Board found other important elements tied to culture, as well.

“Companies with a strong culture of innovation are viewed more favorably and seen as having greater investment potential,” the report said. “Companies with the greatest culture-of-innovation scores also had the highest earnings per share, the biggest dividends, and higher cash-flow multiples.”

Achieving the right culture starts with vision from the top, but it needs to be embedded throughout the organization. A leader with a good idea that is never communicated is not a leader, just a dreamer.

One of the common mistakes organizations make in failing to develop and align the right culture is not being transparent with employees, the Conference Board said.

“Employees need to have a connection to the mission,” the report said. “That connection can be built through transparency – candidly communicating both the good and bad, successes and failures.

An example not cited in the Conference Board report but drawing attention is problems at one of the world’s most-innovative companies, Google. Current and former employees at the techno giant report a reduction in transparency that is adversely impacting that company’s culture and leading some employees to leave.

Multiple news reports are documenting an increased exodus of talent from Google as employees talk about 2018 being a “pivotal point in the company’s shift away from upfront communication.” They point to Project Dragonfly, a censored search engine developed in secret for possible use in China. While the company said it cancelled the project in light of employee concerns, employees said it was a sign Google no longer valued its famed transparency. Hence the increased number of resignations.

Lou Gerstner, who led the 1990s turnaround of then-sagging IBM, may have best summed up the importance of culture to an organization:

“Until I came to IBM, I probably would have told you that culture was just one among several important elements in any organization’s makeup and success — along with vision, strategy, marketing, financials, and the like. … I came to see, in my time at IBM, that culture isn’t just one aspect of the game, it is the game. In the end, an organization is nothing more than the collective capacity of its people to create value.” 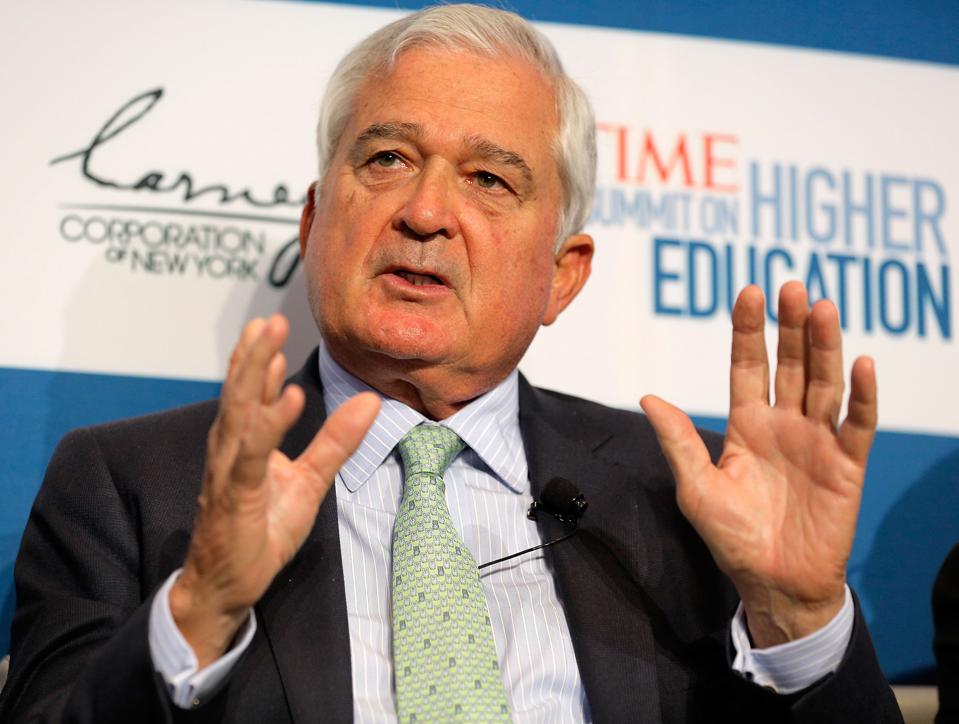 NEW YORK, NY – OCTOBER 18: Former CEO and Chairman of the Board at IBM Louis V. Gerstner Jr. speaks … [+] during the “All Hands on Deck: Perspectives from Higher Education, Government, Philanthropy and Business” panal during the TIME Summit On Higher Education on October 18, 2012 in New York City. (Photo by Jemal Countess/Getty Images for TIME)

Australia In Flames: Pictures Of A Natural Disaster