Breaking
The Ultimate Guide to Saving Money
Lights, Camera, Action—Is There A Post-Covid Future For...
7 Ways to Reduce Human Errors in Your...
How ‘Couples Therapy’ Used Technology To Cope With...
Can You Settle Your Student Loans Or Negotiate...
How to Use Amazon Attribution For Ad Campaigns
What are the Makings of a High-Quality Link?
How To Quickly Start And Scale Your Business
Terra Virtua: What NFTs Can Teach Us About...
5 Easy Steps To Prepare Content For E-A-T...
Physical Inactivity Linked To More Severe Covid-19 Infection...
The 2021 Estimated Tax Dilemma: What Tax-Return Pros...
Want To Digitally Transform Your Business? Start With...
How to Optimize Google My Business and Leverage...
Debunking Link Building Myths in 2021
How, When And Where You Can Gaze At...
Home Technology CES 2020’s Most Compelling PC Gaming Announcements
Technology 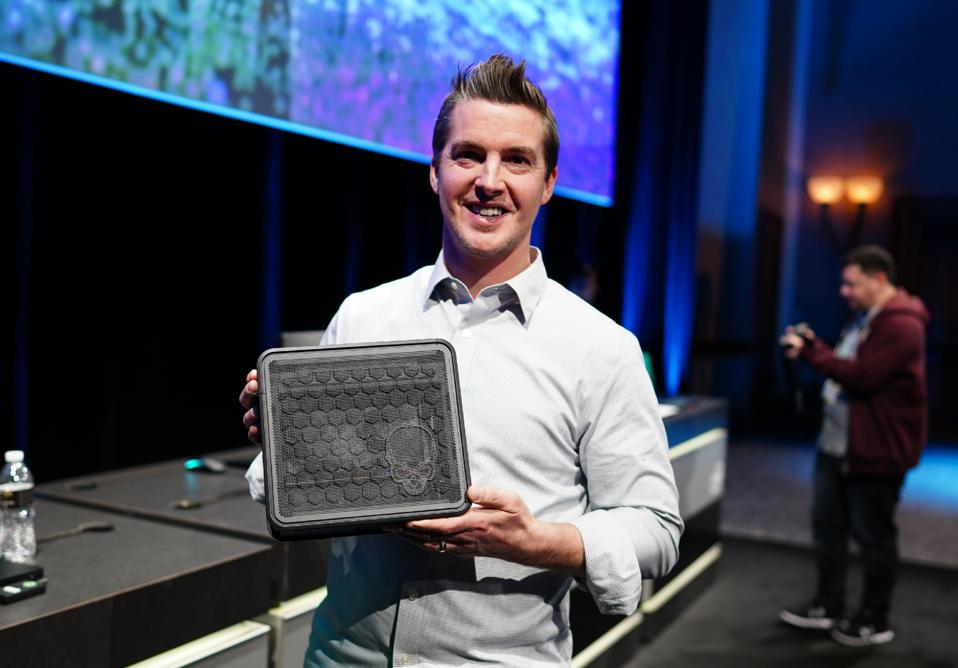 CES is a mad show, featuring thousands of new product announcements every year. I’ve gone through many of the CES 2020 announcements and filtered through to find what I believe are the most compelling. Gaming is an important market segment for the majority of the PC makers and virtually everyone had something to announce in that realm. While this year feels a little less exciting compared to last year’s conference, there are still interesting things worth paying attention to. Let’s take a closer look.

One of the biggest announcements at the show was the unveiling of AMD’s new Ryzen 4000 series for notebooks. AMD’s Ryzen 4000 series, codenamed Renoir, is the company’s next move in the gaming market after it dominated the desktop market in 2019 with the Ryzen 3000 series. Renoir is based on the Zen 2 architecture but has optimizations for use in laptops, spanning the gamut from thin and light notebooks to high-end gaming notebooks with 8 cores and 16 threads. While it carries the 4000 series naming scheme, it is functionally a 3rd Gen Ryzen or similar to the 3000 series desktop chips. For the sake of simplicity, though, I believe AMD will just name all processors that come out this year Ryzen 4000 series. AMD also announced a feature called SmartShift, which allows the system to balance power between the GPU and CPU in a way that matches the user’s active application usage. SmartShift will be deployed by AMD’s partners, such as Dell, in its Dell G Series. The Dell G5 15 SE will be the first product in Dell’s lineup to offer SmartShift. I believe that AMD has quite a hill to climb in the mobile space, but their offerings look compelling and may force Intel to respond, if they can.

That brings us to another new announcement—the Dell G5 15 SE. In addition to offering the latest AMD hardware and features, the G5 15 SE will also ship with a new design language that the company describes as “fighter plane-like.” It will have optional 144 Hz displays, an optional 4-zone RGB keyboard, and an optional 68 WHr battery. It starts at $799.99 and will be available mid-April. Alienware is also rolling out a new 25” gaming monitor with the company’s new Legend design ID. It features NVIDIA G-Sync and 240 Hz refresh rates, and will be available March 11th for $499.

In addition to the two new products, Dell also introduced a new piece of concept software that I’m personally very excited about. Alienware Second Screen is a piece of software that leverages Dell Mobile Connect to give your smartphone the ability to connect to your PC and give you real-time stats about your system or your game (depending on what you’d like to see). I believe that this idea has legs with gamers who only game on laptops—most gamers hate tabbing in and out of their games to get information.

Lenovo’s entry into the PC gaming category at CES this year is the Legion Y742S. Weighing in at 4.18 pounds, the company claims that it is its thinnest and lightest gaming laptop yet. The laptop claims a battery life of 8 hours and features 10th Gen Intel Core i9 CPUs inside, which Lenovo says will offer clock speed of up to 5 GHz. Additionally, it can quickly toggle between performance modes based on the gamer’s needs at that moment. This laptop features a 15.6” 4K IPS display with 600 nits brightness and 60 Hz refresh rate. I believe that the 60 Hz display may give Lenovo some trouble with gamers as many of its competitors’ gaming notebooks offer 144 Hz and above, albeit at lower resolutions. It also comes with Dolby Vision certification, which is good to have for media consumption, but not integral for gaming quite yet.

Lenovo states that the laptop can be configured with up to 32GB of DDR4 memory and 1TB PCIe SSD.. This laptop features integrated graphics only, which is curious for what claims to be a gaming notebook, but might be due to the company’s additional announcement of it’s first external GPU enclosure, the Lenovo Legion BoostStation. The Lenovo Legion BoostStation is an external GPU enclosure that utilizes Thunderbolt 3 as the link between the notebook and GPU enclosure. You can think of the BoostStation as a hybrid between an external GPU enclosure and dock. When a gamer wants to go full performance with a full-size keyboard and mouse, they just have to connect one cable to their laptop and they’re ready to go. While this is by no means anything new for the market, it is nice to see it from yet another one of the world’s leading PC OEMs. That said, I believe that the BoostStation is a bit on the big side for external GPU boxes and I think that Lenovo should consider the size of their external box.

This year at CES, Samsung announced it is now branding its gaming monitors under the same Odyssey gaming brand the company uses for its gaming laptops. The new Samsung Odyssey G9 curved gaming monitor ups the ante from last year’s CRG90 model by doubling the refresh rate to 240 Hz (from 120Hz) and adding support for G-Sync. This monitor also features a 1000R curvature, which means that at its size and curvature should fully capture the field of view of most people sitting in front of it. Based on this monitor’s specs, I believe Samsung has most impressive looking monitor with the best technical specs available. I don’t think there is a single other company that can offer a 49” curved monitor with HDR, 1000 nit peak brightness, and a 5K resolution. Hopefully this year the company will be able to ship the monitor sooner and with less early QC issues than it had last year. If you’d like to take a look at this monitor, I’ve uploaded a video to YouTube for you to watch.

Initially,  I was not sure average gamers would be able to notice the difference , but I was wrong. I believed that most people benefit from refresh rates from 144 to 240 Hz, but 360 Hz feels like a bit of a stretch. Then again, some eSports professionals and semi-pros could see potential benefit from 360 Hz. NVIDIA also quoted professional gamer n0thing, who said his flickshot got much better playing Counter Strike: Global Offensive in 360 Hz. I had a chance to try gaming on 60 Hz and 360 Hz in two of NVIDIA’s demos and saw a noticeable improvement in my CSGO abilities, much like n0thing did. In fact, I managed to come pretty close to his scores, and had a couple good high scores myself. That said, I still believe it would be hard to notice the difference between 240 Hz and 360 Hz while gaming for most gamers. NVIDIA did show a scrolling demo in what I believe was League of Legends with 240 Hz next to 360 Hz and there were some noticeable improvements to the blurring of text and some details.

Intel also gave some early disclosures about the first GPU products powered by the company’s Xe GPU architecture. The first product, Tiger Lake, will be built using Intel’s 10nm++ process node. It appears to be an attempt to put Intel back in competition on the GPU side. While this is by no means a high-performance part, I expect that Intel will be touting performance per watt as a key differentiator. I am also curious to see if it will deploy any intelligent power balancing features like AMD’s SmartShift. Intel has been teasing the DG1 discrete GPU powered by the Xe architecture for quite some time now, but it seems we may finally get a launch date later this year.

Intel also announced Ghost Canyon, also known as the NUC 9 Extreme, an extremely small form factor PC. This announcement follows the heavier push into SFF PCs for enthusiasts we saw in 2019. The NUC will come in multiple versions, with a workstation variant called the NUC 9 Pro and options to utilize the Intel Compute Unit to simplify the build process. The NUC 9 Extreme will support up to an Intel Core i9 processor and sport a 500W power supply, which should supply ample power for most users. Additionally, partners like Razer have adopted the idea of the Intel Computing Element from the NUC and have used it to create the Tomahawk small form factor PC. This PC fits a full-size GPU in addition to all of the other components that come built into the Intel Computing Element.

This year’s CES did not have as many gaming announcements as last year, but the announcements from AMD, Intel and NVIDIA all seem compelling. I personally hope to see Samsung gain more traction with the Odyssey line of curved gaming monitors and the G9. Hopefully the company can get enough of them out in time for games like Cyberpunk 2077, one of the most anticipated titles this year. There will also undoubtedly be a plethora of new CPU and GPU announcements later this year, which should be timed better for content releases than CES. I believe that 2020 will be a very good year for PC gaming hardware—stay tuned for more coverage as it all unfolds.

Disclosure: Moor Insights & Strategy, like all research and analyst firms, provides or has provided research, analysis, advising, and/or consulting to many high-tech companies in the industry. The author does not hold any equity positions with any companies cited in this column.