Breaking
Entrepreneurs Are Bringing Transparency To Home Buying And...
Best Incentive To Get Vaccinated: Money, Messaging, Or...
Page Level Query Analysis at Scale with Google...
How A CIO Can Align IT With Business...
Blogger of the Month: Jo, Girl Eats World
6 Things Women In Business Know That Men...
How to Use First-Party Data for Ad Personalization
Pressing Reset—Putting A Fallen Unicorn Back On Its...
How We Went Viral: Promoting Content with Influencers,...
Blame Olympic Record Price Tag For Return To...
Apple iOS 14.5 Release: Should You Upgrade?
How to Come up with Podcast Topics and...
Why Gaming Gear Company Razer Launched A $50...
Technical SEO Implementations to Increase the Impact of...
30 Brilliant Ways to Market Your Eco-Friendly Shopify...
15 Tech Industry Leaders Share Overused (And Misused)...
Home Technology CES Displays Cool Mobile Tech, But No Plan For 5G Spectrum
Technology 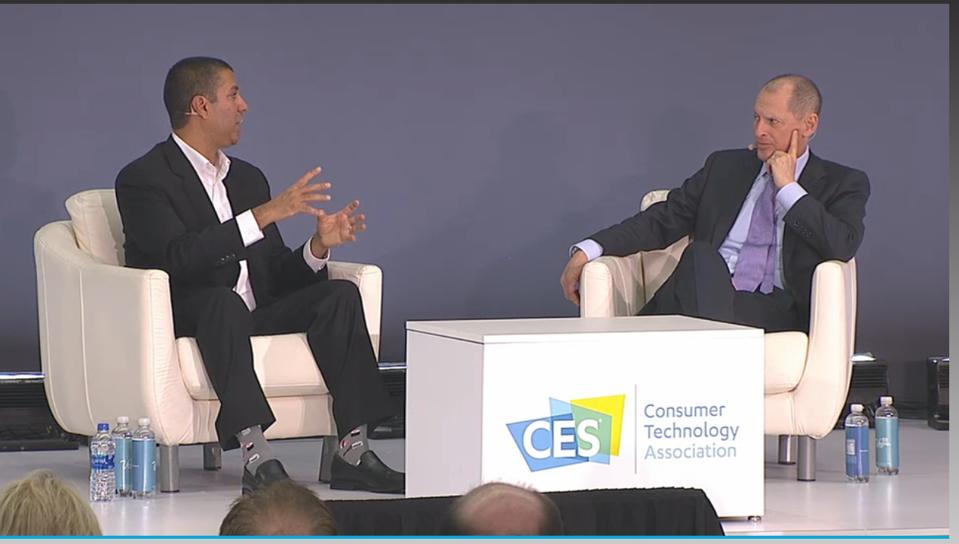 Every January some 200,000 people, thousands of tech exhibitors and over 1000 speakers come to Las Vegas for the Consumer Electronics Show (CES). This is where the future is on display, and it’s telling that the key theme is 5G or the fifth generation of digital cellular networks. Everything from smart cities, renewable energy, and sustainability to media, entertainment and advertising to health, wellness, and the home are predicated on next generation connectivity. This innovation theme was described by diverse panelists: Boston Consulting Group on smart cities; Amazon, Siemens and Los Angeles Department of Transportation on mobility; sports executives on enhancements to buying tickets, entering stadiums, purchase concessions, and refereeing games; Delta Airlines CEO Ed Bastian on ubiquitous, free inflight Wi-Fi; John Deere and Nature Conservancy on addressing  challenges from climate change and population growth; and FEMA, Mastercard, Allstate, and Alliance on accelerating recovery from natural disasters. Keynotes by the CEOs of Samsung and Daimler described their vision of rolling out billions of connected devices on 5G networks that that other parties must build.

The US has abundant ingenuity, but the spectrum (or radio waves) to power this technology is in short supply. At least 23 countries have already enabled valuable mid-band spectrum for 5G (notably the C-band), frequencies prized for their properties to transmit large quantities of data over long distance, but the US is playing catch up. Nearly every American has enjoyed the transformation powered by 4G, the economic revolution driven through wireless internet smartphones, including millions of new jobs and hundreds of billions of dollars in economic development. This was powered by lower band frequencies. 5G technologies, however, require more data and hence higher frequencies, such as the C-band. Unfortunately, the US Department of Defense sits bulk of this beachfront spectrum, frequencies of and for which they reject using more efficiently, paying for, or sharing—pratices which are expected abroad. Without a rational utilization process for federal spectrum users and bulk of spectrum, private sector actors must make do. Private satellite companies holding the precious frequencies are willing to make their C-band frequencies available in the US; and many service providers are willing to buy. Notably a portion of monies from the purchase of spectrum licenses is deposited in the Treasury, an important source of revenue for the government.

There is a process to repurpose bits and pieces of spectrum which are scattered across the C-band. Senators Wicker and Thune sponsored the 5G Spectrum Act requiring the Federal Communication Commission (FCC) to make 280 MHz available by the end of 2020.  FCC Chairman Ajit Pai’s accomplishments include the 5G Fast plan, a comprehensive strategy of regulatory retooling, spectrum auctions, and market incentives designed to spur the rollout of 5G. While 5G technology has already been launched in dozens of locations nationally using high band spectrum, realizing nationwide coverage requires more mid-band spectrum.

Pai is pinning his legacy to his belief in free market principles and private investment, as well as the FCC’s ability to deliver a competitive bidding auction for the C-band spectrum within the year. The FCC hasn’t done an auction so quickly before; it is attempting to crunch what normally can take decade down to one year. On the other hand, Pai is a doer and has accomplished more than most FCC chairmen.

Speaking at CES, Pai noted that there is scant spectrum to meet demand. He also suggested that Congress is not doing enough to make spectrum available. Policymakers should heed this warning and note the urgency for the FCC to achieve a successful C-band auction. Otherwise the US to will lose the global 5G race, and the CES vision will not be realized.