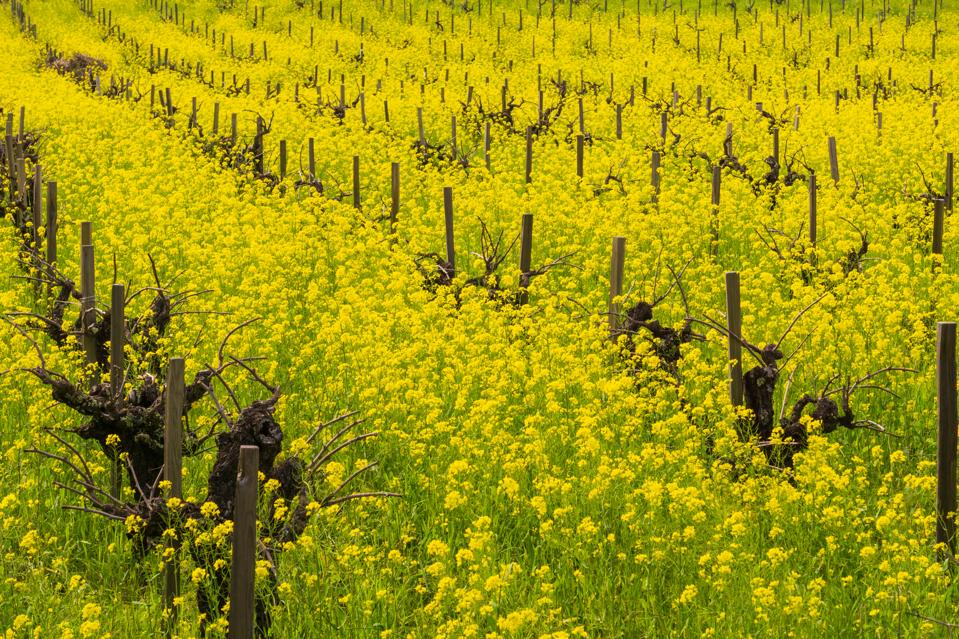 Field of wild mustard in bloom at a vineyard in the spring, Sonoma Valley, California

After a recent post concerning sustainability, email arrived from people in and out of the wine business on the apparently thorny subject of glyphosate, the weed killer. Being neither expert on glyphosate nor on sustainability, a little research was in order.

In some vineyards crops are purposely allowed to flourish between rows, to crowd out certain weeds and to fix nitrogen in the soil. But other vineyards are treated differently; some use glyphosate, a broad-spectrum systemic herbicide, especially used against annual competing broadleaf weeds and grasses. Most know the weed killer by the trade name, Roundup. It kills weeds through foliage absorption when sprayed on the plants, which means it kills only plants which have already begun to grow and spread their leaves. Introduced by the chemical company Monsanto, Roundup has been available for agricultural crops since the 1970s; over that time, Monsanto has been a leader in developing genetically engineered agricultural crops which tolerate glyphosate spill off, but not grapevines.

The California Wine Institute (WI) made initial contact in a press release concerning the California Sustainable Winegrowing Alliance (CSWA), so when I asked for more information WI emailed that CSWA, “…approaches crop protection through the lens of Integrated Pest Management (IPM). An IPM approach combines biological, cultural, mechanical and chemical tools (minimally and only when needed) to minimize economic, environmental and human health risks when controlling pests, weeds and disease. IPM is the basis for both organic and sustainable approaches.”  WI also said it continues to “…monitor glyphosate and domestic and international activities.”

In 2015 the World Health Organization (WHO) claimed glyphosate is a probable carcinogen. Based on the WHO information, in 2018 the California Office of Environmental Health Hazard Assessment (OEHHA) listed the herbicide as a probable carcinogen. Also that year, a jury in the state awarded $289 million to a man who claimed Roundup was the probable cause of his cancer, and that Monsanto did not warn him. In January 2019, France banned Roundup 360.

The WI glyphosate information web site quotes Carl Winter, Ph.D. Professor, Food Toxicology University of California at Davis: “…An adult would have to drink more than 140 glasses of wine a day over 70 years containing the highest glyphosate level measured to reach the level that California’s…(OEHHA) has identified as ‘No Significant Risk Level (NSRL).’”

Winters’ quote does not address the possibility, if any, of toxic build up of daily glyphosate taken in from a variety of food sources. California had established a requirement to display glyphosate warning signs on products, but OEHHA apparently had determined the warning is not necessary on wine labels, because, as WI explains it, “…the level that might be found in wine, if any, is insignificant compared to the NSRL.”

In February, 2019 a story broke claiming after testing 15 different types of beer and five different types of wine, U.S. researchers found glyphosate traces in 19 out of the 20 beverages tested. The wine brand Sutter Home measured the highest glyphosate residue in the study: 51 parts per billion (51 micrograms/liter). The organic wine from Argentina, Inkarri Estate tested at 5.2 parts per billion (5.2 micrograms/liter).

CSWA accepts glyphosate use as part of a sustainable viticultural program; its 3rd Edition Code Workbook Chapter 6, which covers Pest (and Weed) Management, includes in its introduction: “IPM is a sustainable approach to managing pests by combining biological, cultural, and chemical tools in a way that minimizes economic, health, and environmental risks.”

Sections 6-17 to 6-20 of the workbook cover weed management. Use of Roundup is mentioned under “How To Kill More Weeds With Less Herbicide” and “Tips On Chemical Weed Control.”

John Collins Has Earned An Extension With The Atlanta Hawks. But For How Much?

How to Embrace a Competitors Mindset to Grow...

The Best — And Most Important — Video...

2019: Yet Another Year Of Dramatic Ice Loss

How This Manufacturing-Automation Startup Signed Up Auto-Parts Giant...