Breaking
Behind The Curtain—Chapter 11 From The Inside—Chapter 10—The...
Three Classic Ways To Get New Business
With Hope, Perseverance And Faith, Two Friends Are...
Exxon Mobil Shares Cross 10% Yield Mark
T-Mobile for Business BrandVoice: From Sci-Fi To Everyday...
How To Move Your Career Forward By Making...
A Conversation With Jill Houghton, President And CEO...
VW’s Electric ID.4 Lands In Q1 2021 With...
Would Biden Enact Broad Student Loan Forgiveness? These...
Why You Must Slay Your Mindset And Stop...
Surviving The Pandemic With Your Culture Intact: How...
The Disruption Of The Consulting Industry Is Here
Remote 101: How To Create Meaningful Connections For...
How To Reassess Your Finances To Align Your...
7 Things Every Entrepreneur Should Automate
Volkswagen’s Truck Unit Ties Up With TuSimple On...
Home Business Chicago Bulls Start Interviews For Executive Vice President Of Basketball Operations Job
Business 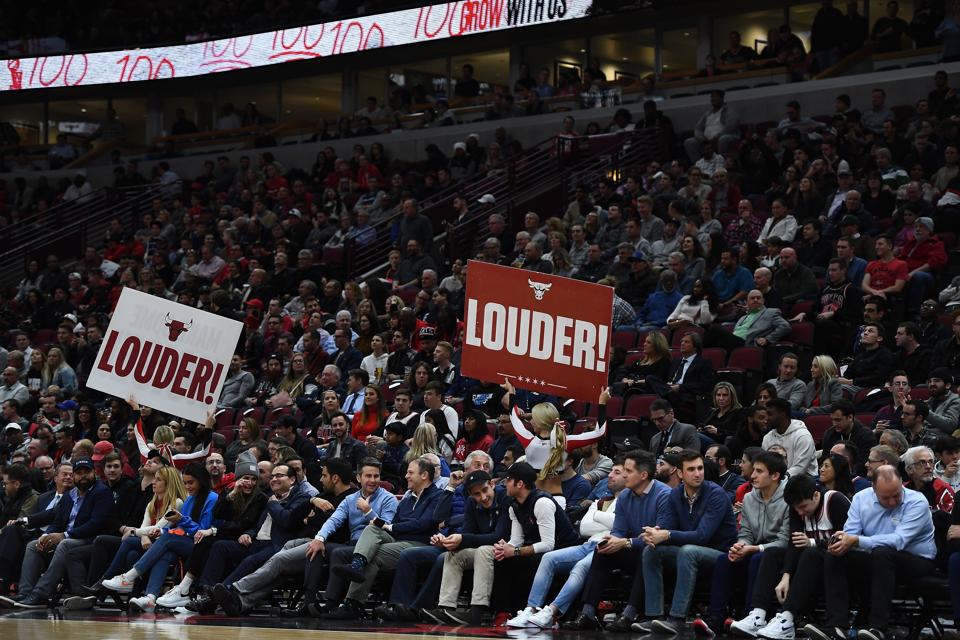 CHICAGO, ILLINOIS – NOVEMBER 18: A general view of fans during a game between the Milwaukee Bucks … [+] and the Chicago Bulls at United Center on November 18, 2019 in Chicago, Illinois. NOTE TO USER: User expressly acknowledges and agrees that, by downloading and or using this photograph, User is consenting to the terms and conditions of the Getty Images License Agreement. (Photo by Stacy Revere/Getty Images)

The Chicago Bulls have begun interviews for a new lead executive in their front office, with Utah Jazz general manager Justin Zanik participating in a video interview on Monday, according to ESPN’s Adrian Wojnarowski. Denver Nuggets general manager Arturas Karnisovas will interview later this week.

Woj reports the position being interviewed for is executive vice president of basketball operations, which is John Paxson’s current job title. Paxson has reportedly been pushing for change in the front office and will be sticking around in a different position. The Chicago Sun-Times Joe Cowley says Paxson wasn’t in on Monday’s interview and reiterated the desire to move to the background, but he “will retain a key role in the organization.”

Paxson’s continued presence in the front office will only lead to questions about how much power he has and whether or not the new hire will have full autonomy when it comes to decision-making. Paxson has ownership’s support and has been around forever, so it’s only natural to wonder about his influence moving forward, even if he’s supposedly not going to be involved in day-to-day basketball operations. If he actually does step aside and take on more of a figurehead role, that’s a step in the right direction and could be crucial when it comes to making this hire.

The Bulls may need to give assurances to their top candidates that they would have full power in order to pry one of them away from their current jobs. Zanik and Karnisovas are both key members of well-respected organizations that have enjoyed a good amount of recent success, so it will likely take a clear promotion and the ability to truly run the ship to make a move. The Nuggets and Jazz are both toward the top of the Western Conference this season, with Denver holding the No. 3 spot and Utah 1.5 games behind at No. 4.

Zanik does have Chicago ties. He went to Northwestern and interned in Chicago for agent Mark Bartelstein, who has close ties with the Bulls organization. Zanik also represented Omer Asik when the Houston Rockets pried the big man away from the Bulls with a unique offer sheet in 2012.

The Bulls reportedly were thinking about staying away from Zanik because of his ties to player agency. However, K.C. Johnson of NBC Sports Chicago reports Zanik’s “strong reputation for communication, cap knowledge and connections with international basketball helped him overcome the Bulls’ typical approach to agents.”

Karnisovas has worked in Denver since 2013 and was made general manager under president Tim Connelly in 2017. Karnisovas worked for the NBA and then as an international scout for the Houston Rockets before heading to Denver. He was a finalist for general manager jobs with the Bucks (along with Zanik) and Brooklyn Nets before his Nuggets promotion.

While Zanik or Karnisovas would be a solid hire, the Bulls have hit some stumbling blocks in their search. Indiana Pacers general manager Chad Buchanan pulled out of the running over the weekend, and Miami Heat assistant general manager Adam Simon is also staying put. It looks like Toronto Raptors general manager Bobby Webster won’t be going anywhere either.

Not even getting to interview several of their top candidates isn’t the best look for the Bulls, but it ultimately might not matter. They still have a chance to make a quality hire even though a few of their top guys are out and they aren’t chasing any big fish like Masai Ujiri or Sam Presti. The questions surrounding ownership, Paxson and Gar Forman are legitimate and very well may have played a role in these candidates not interviewing, but this is still an attractive job opening. Even with their recent struggles, the Bulls are a prestigious, global brand playing in a big market with some young talent in place.

Chicago is planning to make a hire before the NBA resumes play, whenever that may be.

From Head To Toe, These Businesses Are Supporting Healthcare Workers Fight Coronavirus