Breaking
Parrot Plumage Color May Be Linked To Body...
Recent Precious Metals Dip A Buying Opportunity
Looking For Venture Capital? Here’s How One 50+...
Growing Your Retirement Money Using 401(k) Dollar-Cost Averaging
Wellness Exec Abby Miller Levy Partners With Venture...
Microsoft Teams Issues Strike To Zoom With Tidal...
What’s Coming For The S&P 500 In October
4 Ways You Can Showcase Empathy With Your...
A $22,000 Microsoft Surface Will Soon Be For...
Zooming In – Should SMEs Invest In The...
iOS 14: The Surprising Security Risk Of Sharing...
How A Break From Lord Sugar Changed The...
Sunday’s Google Doodle Is Actually About Google
Office Of The Comptroller Of The Currency Chief...
Source Code For Multiple Windows Operating Systems Publicly...
Why Forgettable Pfizer Really Is A Great Value...
Home Finance China Ends Week Positive/Hong Kong Flat Despite Black Friday, WeChat Primer, And Week In Review
Finance

A man walks past a sign for Tencent, the parent company of Chinese social media company WeChat, … [+] outside the Tencent headquarters in Beijing on August 7, 2020. – Beijing on August 7 accused the United States of “suppression” after President Donald Trump ordered sweeping restrictions against Chinese social media giants TikTok and WeChat. (Photo by GREG BAKER / AFP) (Photo by GREG BAKER/AFP via Getty Images)

Would you believe that Mainland Chinese stocks ended the week up and Hong Kong ended the week basically flat? Friday was no bueno on Tencent’s WeChat, inexplicably drawing the ire of President Trump as several brokers described today as Black Friday. Hong Kong was off -1.6% with volume leader Tencent down -5.04%, wiping out $35B of market cap and investors’ capital. Though off an intra-day low of -10%, Alibaba BABA Hong Kong was down -3.04% and off an intra-day low of -6.38%. Semiconductor Manufacturing (SMIC) was down -8.7%, Meituan Dianping up +0.54% and IPO Tigermed up 13% from their offering price as the listing was oversubscribed 414X. Investment banks involved included Bank of America BAC , Haitong, CLSA and CICC. NetEase NTES Hong Kong was off -1.67% while JD.com Hong Kong was off -2.99%. Tigermed is an interesting company as it does clinical trials. Post IPO, the company is valued at $13B. Not many positives today as the market was risk off. Mainland China was also risk off with all sectors in the red. Foreign investors were net sellers as for the week they sold $639mm of Mainland stocks. YTD inflows are around +$17B.

An institutional broker likes to point out news items that in theory the market should care about, but doesn’t. He’ll write “market no cares”. The WeChat news steamrolled what is a great release as “market no care”. China is the middlemen in global trade, so it acts as a barometer for the global economy as commodities come in and manufactured goods go out. The numbers speak for themselves, though US imports increased 3.5% year over year following June’s +11.3% to $11B and $10B. Chinese exports to the US +12.5% at $43B up from June’s $39B while European Union exports were down in percentage terms but stable month over month at $36B in July versus $33B in June. Interestingly imports from India remained high +67% in July as Chinese exports continued to be low -21%. The numbers show the global economy is on firmer ground than we might think. Maybe stocks upward movement isn’t as irrational as it feels.

WeChat Primer: Hong Kong listed Tencent’s core business is video games. QQ was established as a desktop instant messaging service similar to the ancient AOL IM, as cell phone charges for making calls is expensive in China. WeChat allows one to connect to WiFi and chat/make phone calls while avoiding cell charges. WeChat is simply the mobile phone version of QQ, though its features and functionality have evolved well beyond instant messaging. I find that Google GOOGL ’s WhatsApp is very limited in comparison. For WeChat’s 1.2 billion users, it acts as a mobile wallet and as a social media app like Facebook where you can post photos.

In China, you can basically run your life off it. Unlike TikTok, the company has very few US users, though for Chinese tourists in the US and those communicating or doing business with China, WeChat is essential. Why would the US care about WeChat? Remember that US China trade representatives will meet on August 15th. The move is likely the ‘Art of the Deal’ as the US twists a knife pre-negotiating. Additionally, when going into the election, throwing China under the bus is a clear strategy as the China hawks are being given the green light to have at it. In my opinion, the tactic is a distraction technique to move headlines away from domestic issues. The problem with the tactic is US companies’ $376B of China revenues according to the NY Federal Reserve. Push too hard and US companies could suffer in addition to the US stock market, as 46% of US publicly traded companies have exposure to China. The US did clarify that the ban doesn’t apply to Tencent but just WeChat, which shows that this more bark than bite. As an unintended consequence, this ban could limit US companies from advertising on WeChat putting them at distinct disadvantage to global competitors.

The President’s Working Group on Financial Markets released its findings after the US market closed. The group was established following the Senate’s passage of a bill to delist US listed Chinese companies post the Luckin Coffee fraud. Chinese companies’ auditors are not allowed to give their audit books to the PCAOB due to Chinese law. This law should be changed, as China is the only country that doesn’t allow it. Why does the law exist? I believe due to a small number of State-Owned Enterprises and not the vast majority of private companies. The issue has lingered for seven years without resolution, though the Luckin fraud combined with Trump appointees at the PCAOB and SEC have thrown in the towel on negotiating talks out of frustration. Currently the bill is limbo since the House tried to attach the annual defense budget to it. However, I’m told that the Wall Street lobby is pushing hard due to revenues from IPOs and trading of the shares. The reality is that +$1 trillion of market cap is owned by US investors and not Chinese investors! Changing the rules for companies that have already gone public is moving the goal posts. If you Google Alibaba IPO prospectus you will see SEC Chair Jay Clayton’s name on the first page. He helped bring Alibaba public! The release, despite the headlines, gives the companies an out as it states:

“For nearly ten years the PCAOB has tried to Companies unable to satisfy this standard as a result of governmental restrictions on access to audit work papers and practices in NCJs (non-complying jurisdictions) may satisfy this standard by providing a co-audit from an audit firm with comparable resources and experience where the PCAOB determines it has sufficient access to audit work papers and practices to conduct an appropriate inspection of the co-audit firm.”

The US listed Chinese companies are audited by the Big Four US accounting firms, which the PCAOB knows well. The Luckin Coffee fraud was discovered by Ernest & Young during their annual audit. There is an out here in my opinion. Unfortunately, the Hong Kong IPO bonanza will only continue as US listed Chinese companies relist in Hong Kong regardless due to higher valuations given to the companies in Asia than in the US.

Yesterday, I spoke with an institutional investor as our conversation was dominated by US China political rhetoric. Josh Brown has spoken about Evidenced Based Investing. In finance, everything we do is driven by data and economic theory. Technology has changed the media as there is little fact checking while journalists are paid by how many article clicks are given. To some degree, the same is true for politicians. Is TikTok sharing user data with the Chinese government? If the Chinese government cares about dancing teenagers, I’d be surprised. WeChat is “national security threat”? Prove it. No one had ever heard of Huawei until it was deemed a threat. They make inexpensive cell phones. I was looking forward to the US court case on Huawei as it would require the US to provide evidence for all of us to see. We all have a right to an opinion though as investors, we need to focus on facts and the data. In general, I hear a lot of conjecture with little supporting evidence. 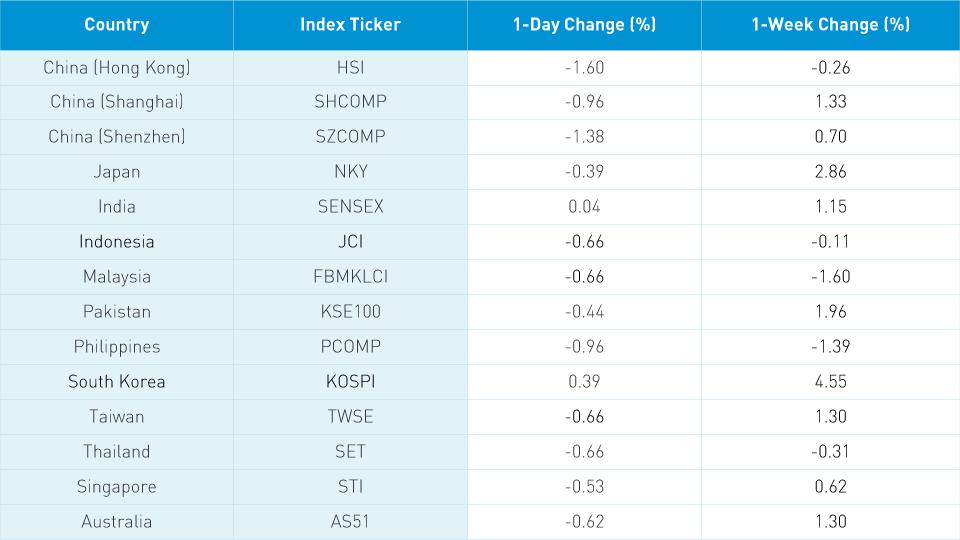 Northbound Stock Connect volumes were elevated but inline with the new normal. Shanghai had net selling while Shenzhen had net buying. Shanghai Connect volume leader Kweichow Moutai was sold 7 to 5, China Tourism sold but not by a big margin, and Citic Securities were sold 2 to 1. Shenzhen Connect volume leader Luxshares was bought by a very small margin, Gree Electric Appliances was sold by small margin, and Wuliangye Yibin was bought 2 to 1. Foreign investors sold -$267mm of Mainland stocks today as Northbound Stock Connect trading accounted for 5% of Mainland turnover.

Krane Funds Advisors, LLC is the investment manager for KraneShares ETFs. Our suite of China focused ETFs provide investors with solutions to capture China’s importance as an essential element of a well-designed investment portfolio. We strive to provide innovative, first to market strategies that have been developed based on our strong partnerships and our deep knowledge of investing. We help investors stay up to date on global market trends and aim to provide meaningful diversification. Krane Funds Advisors, LLC is majority owned by China International Capital Corporation (CICC).

How To Have Better Customer Conversations During The Covid-19 Crisis

Will Covid Be The Opportunity We Need To Reimagine Learning?