Breaking
The Impact of Internships in Marketing
3 use cases of chatbots for critical services
How To Make Working From Home Appeal To...
Tips on How to Design an Office Space...
4 Tips To Help Build Amazing Customer Relationships
How Are US Pension Funds Responding to the...
Benefits of second-hand cars for your business
4 Reasons Why Your App Needs To Undergo...
Your Guide to Online Marketing
How to find a Solicitor in London
5 car tyre and safety tips for a...
Everything You Need to Know About Corporate Social...
Is Adaptive Leadership the Key to Motivating Employees?
Why business events are set to return with...
Business events set to return with a bang!
Expanding Internationally: 5 Things to Consider for eCommerce...
Home Finance China Keeps A Trade War Promise
Finance 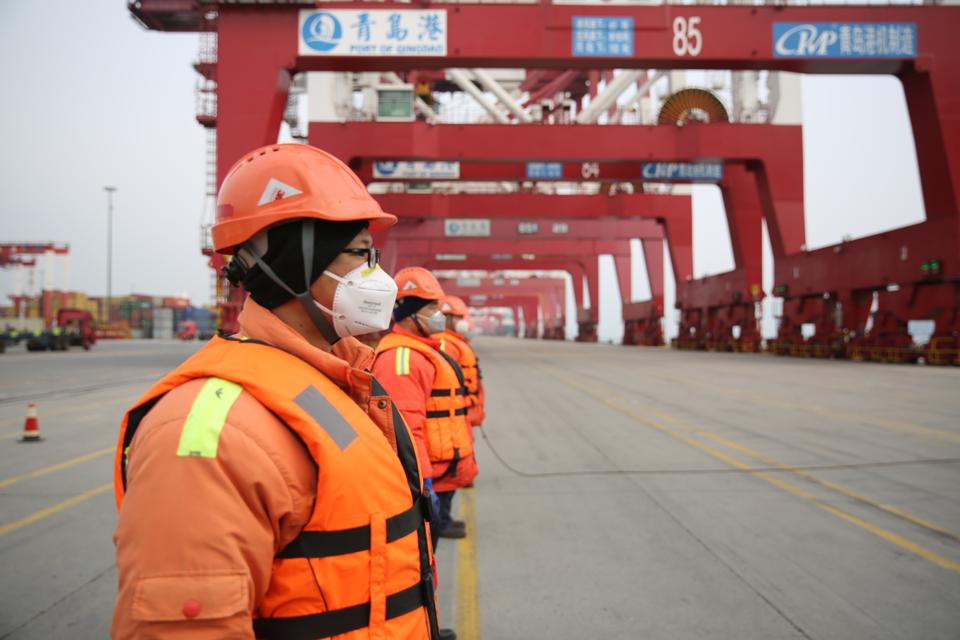 Workers in surgical masks to protect from coronavirus wait for a freighter to dock at China’s … [+] Qingdao port on February 4, 2020. PHOTOGRAPH BY Costfoto / Barcroft Media

China kept a trade deal promise on Thursday, cutting tariffs in half. Markets cranked it out once again as bears are left scratching their heads as why the coronavirus, still not under control, is not pulling the rug out from U.S. and China stocks.

China is lowering their 10% tariffs to 5% and their 5% tariffs to 2.5%, an all-time low and equal to what the U.S. used to charge for the entry of Chinese goods prior to the trade war.

The tariffs are good for automotive parts, and agricultural commodities, chemicals, crude oil, whiskey, and seafood. The reduction was part of the phase one trade agreement signed by the two countries late last year.

“China hopes both sides can follow what have been agreed in the deal and make efforts to implement relevant parts of the deal to boost market confidence, to promote bilateral relations, and to help world economic growth,” China’s Ministry of Finance said in a statement. 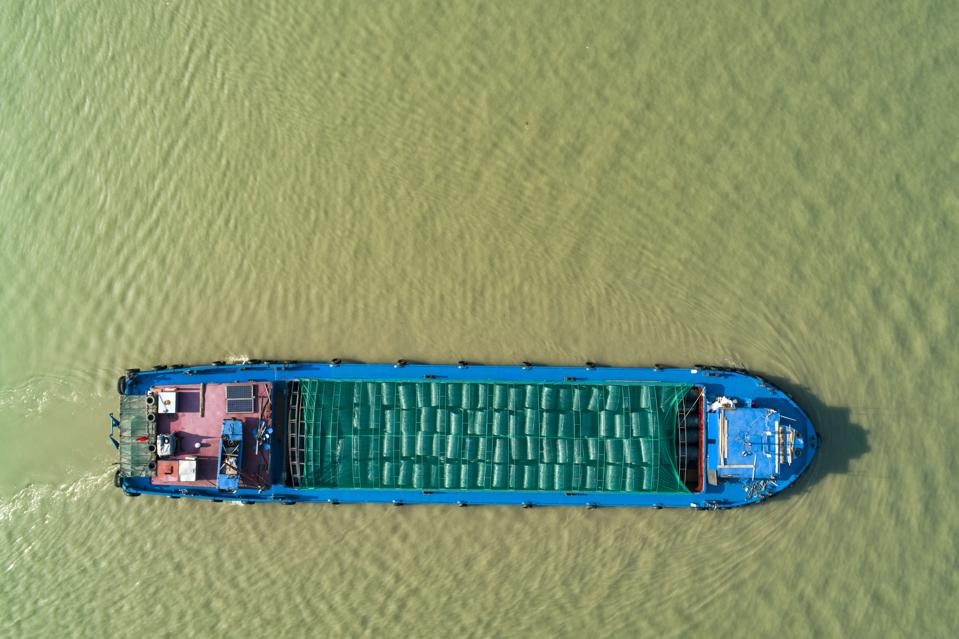 A cargo ship plots along the Grand Canal in Huai’an, Jiangsu Province, China on January 31 2020. … [+] (Photo by He Jinghua/VCG via Getty Images)

Markets rejoiced, but did not get out of hand this morning, with the Dow opening higher, then falling a tad. China and U.S. benchmark index funds were both up by around 0.1%.

The novel coronavirus remains a headwind for China.

“The impact on economic growth from the coronavirus should be minimal in the U.S. It could make for a noisy first quarter, both for economic date and corporate earnings.”

Today’s announcement by the Finance Ministry does not mean that China will remove all additional trade war tariffs on these sets of goods, only the additional duties imposed on the $75 billion on August 23 last year, the South China Morning Post reported.

On Wednesday, Reuters reported that Foxconn, one of the manufacturers of Apple products in China, would keep its factories closed until the end of February. The Wuhan flu, known scientifically as the novel coronavirus, has many cities on lockdown. People have been working from home and buying goods on line.

According to Johns Hopkins University, the number of cases rose by more than 3,000 again over the last 24 hours, hitting 28,344 with a death toll of 565 people, of which 549 of them are from Hubei province, home to Wuhan city, the epicenter of the outbreak that began in early December.

The new 1,000 bed hospital built in the city and completed recently is not enough to house the thousands of patients exposed to the virus and exhibiting symptoms of it.

Market consensus is that the novel coronavirus outbreak will reach SARS-like death tolls this month of roughly 775 people. Once that critical mass is reached, everyone will be looking for the number of new cases to level off or, preferably, be in decline. If that is not the case, markets should correct quickly.

The IMF said yesterday that China should face a V-shaped recovery at some point in the second quarter, providing the outbreak works it way out of the system by the end of the first quarter on March 31. 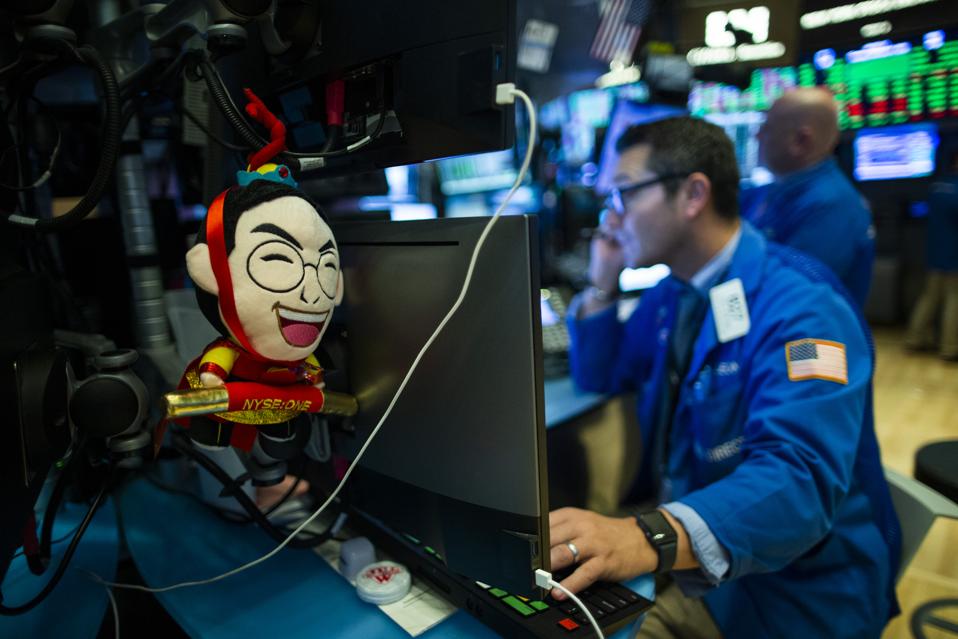 Traders work on the floor of the New York Stock Exchange on February 6, 2020. Investors avoided … [+] getting overly excited about the tariff cuts as coronavirus remains top of mind for China. (Photo by Eduardo Munoz Alvarez/Getty Images)

“The effects of the coronavirus on first quarter growth remain to be seen, but we believe that the pattern will follow earlier instances of health emergencies, such as SARS and the Swine Flu,” says Scott Clemons, chief investment strategist at Brown Brothers Harriman in New York.

Clemons thinks the impact on economic growth will be minimal in the U.S.

“The fundamentals of the U.S. economy are strong as we can see that from the ADP payroll reading,” says Naeem Aslam, chief market analyst for AvaTrade. “Economic surprise indexes are rising not only in the United States, but also in the Eurozone, and in the emerging market economies.”

China’s economy was rebounding thanks to a cease-fire on the tariff front of the trade, and central bank easing policies. The outbreak came at a time when China’s economy was on the mend. This gives global business leaders and investors the idea that once coronavirus goes the way of SARS, economic activity will return to normal fast. SARS ended in 2003 with the last incidence of the disease reported in 2004.

Moreover, the earning season has been good here at home and China sectors, namely tech, have been total outperformers even as the public health crisis continues to unfold.

“We remain fully exposed to U.S. equities,” says Clemons, acknowledging that the market is due for a bigger correction than what we’ve seen early in the week. “By our count there have been 22 corrections in this bull market cycle, averaging 9.9% in depth and 2 months in duration.”

I Should Coach My Team, But I Just Don’t Have The Time