Breaking
Why Do We Do What We Do? Manipulating...
California Brand Goes All-American As Amazon Bans Foreign...
Trump’s Taxes Are Finally Leaked—What’s Next?
Washington Heats Up Ahead Of First Presidential Debate:...
Systemic Racism Leads To Disparities In Nursing Home...
The New Regular: Prepare For Conflicts Of Customer...
Web VR.0 – Have VR Websites (Finally) Arrived?...
This Next Evolution Of Ecommerce Did $18 Billion...
IRS Taxes Most Lawsuit Settlements And Exact Wording...
13 Questions To Answer Before You Die
Just Launched: Long-Term Stock Exchange For Companies Building...
How To Make Your Savings Work Harder For...
Xbox Series X Hands On Previews Reveal 70-80%...
How Business Leaders Can Rethink, Redesign And Reimagine...
How To Make Peace With Your Internet Passwords
37 ‘CS:GO’ Coaches Banned For Cheating With More...
Home Business China Will Outpace US Artificial Intelligence Capabilities, But Will It Win The Race? Not If We Care About Freedom
Business 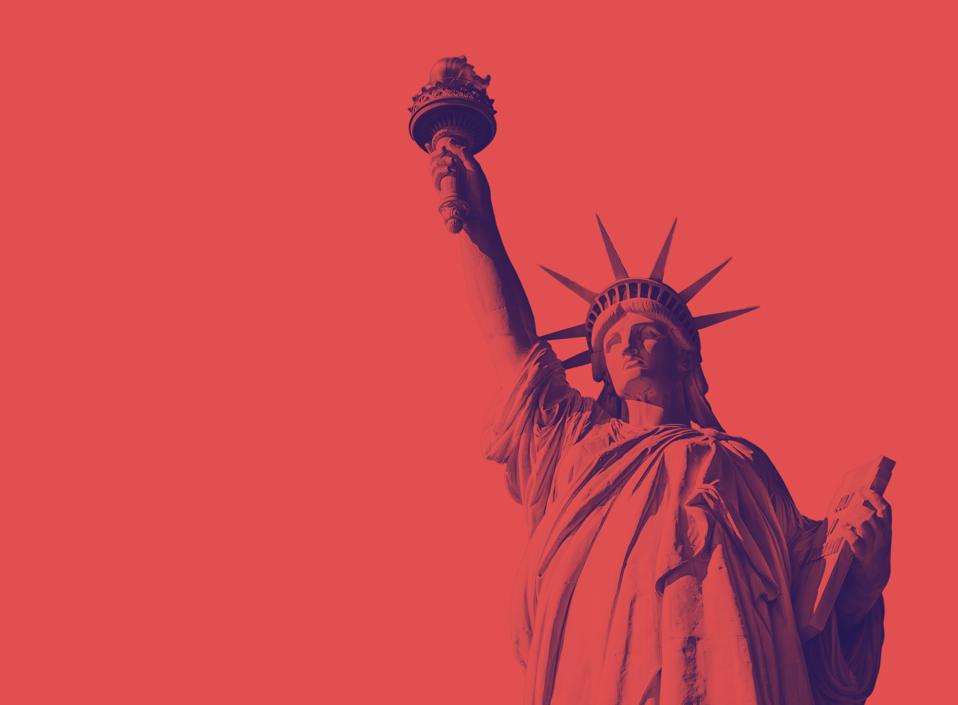 Bottom view of the famous Statue of Liberty, icon of freedom and of the United States. Red and … [+] purple duotone effect

We’ve all heard that China is preparing itself to outpace not only the United States but every global economy in Artificial Intelligence (AI). China is graduating more than 2-3x the amount of engineers each year than any other nation, the government is investing to accelerate AI initiatives, and, according to Kai-Fu Lee in a recent Frontline documentary, China is now producing more than 10x more data than the United States. And if data is the new oil, then China, according to Lee, has become the new Saudi Arabia.

It’s clear that China is taking the steps necessary to lead the world in AI. The question that needs to be asked is will they win the race?

According to the Frontline documentary, China’s goal is to catch up to the United States by 2025 and lead the world by 2030. If things stay the way they are, I do believe China will outpace the United States in technical capabilities, available talent, and data (if they’re not already). However, I also believe that eventually, the Chinese system will either implode, not be adopted outside of China, or both. Why? Let me explain.

A recent report from Freedom House shows that freedom on the internet is declining, and has been for quite some time. Study after study shows that when we know we’re being surveilled, our behaviors change. Paranoia creeps in. The comfort of being ourselves is lost. And, ultimately, society is corralled into a state of learned helplessness where, like dogs with shock collars, our invisible limits are not clearly understood or defined but learned over time through pain and fear. This has been shown to lead to systemic mental illness ranging from mass depression to symptoms of PTSD and beyond.

Not so ironically, we’re seeing a realization of these impacts within society, especially among the tech-literate, younger generations. A recent study from Axios found that those age 18-34 are least likely to believe “It’s appropriate for an employer to routinely monitor employees using technology” and most likely to “change their behavior if they know their employer was monitoring them.” A deeper impact of this type of surveillance—what Edward Snowden has deemed our Permanent Record—can be read about in a recent New York Times article about Cancel Culture within teens. People, especially the younger generations, don’t want to be surveilled or to have their past mistakes held against them in perpetuity. And if they’re forced into it, they’ll find ways around it.

In the Freedom House report, China is listed as one of the worst nations in the world for this type of behavior. This is also spoken to in the Frontline documentary where it was mentioned that China’s powerful new social credit score is changing behavior by operationalizing an Orwellian future. Some places in China have gone as far as requiring facial recognition to get access to toilet paper in public restrooms. Is this the life we want to live?

If the system continues this way, people will change their behavior. They will game the system. They will put their devices down and do things offline when they don’t want to be tracked. They will enter false information to spoof the algorithms when they’re forced to give up information. They will wear masks or create new technologies to hide from facial recognition systems. In short, they will do everything possible to not be surveilled. And in doing so, they will provide mass amounts of low-quality, if not entirely false, data, poisoning the overarching system.

If China continues on its current path of forced compliance through mass surveillance, the country will poison its own data pool. This will lead to a brittle AI system that only works for compliant Chinese citizens. Over time, their system will cripple.

Freedom As A Service

Great AI requires a lot of data, yes, but the best AI will be trained on the diversity of life. Its data will include dissenting opinions. It will learn from, adapt to, and unconditionally support outliers. It will form to, and Shepard, the communities it beholds, not the other way around. And if it does not, those of us living in a democratic world will push back. No sane, democratic society will adopt such a system unless forced into it through predatory economic activity, war, or both. We are already seeing an uprising against the surveillance systems in Europe and the United States, where privacy concerns are becoming mainstream news and policies are now being put into place to protect the people, whether tech companies like it or not.

If our democratic societies decide to go down the same path as China because they’re afraid we “won’t keep up” with societies that don’t regulate, then we’re all bound to lose. A race to the bottom—a race to degrade privacy and abuse humanity in favor of profit and strategic dominance—is not one we will win. Nor is it a race we should care to win. Our work must remain focused on human rights and democratic processes if we hope to win. It can not come down to an assault on humanity in the form of pure logic and numbers. If it does, we, as well as our democratic societies, will lose.

So what’s the moral of this story? China will outpace the United States in Artificial Intelligence capabilities. But will it win the race? Not if we care about freedom.

Clove: The Footwear Start-up On A Mission To Improve The Lives Of Healthcare Professionals