Breaking
Florida Supreme Court Tells The American Bar Association...
How to Write Perfect Paid Social Media Marketing...
How To Boost Productivity In Your Small IT...
How Restaurants Can Design a More Sustainable Food...
Expenses That Small Business Owners Need to Be...
How You Can Make Saying Goodbye To The...
Biden To Meet Royal Family At Cornwall’s Eden...
It’s Going To Be Emotional — Going International...
Peer Mentoring For Students: STEM & Buds
7 PR Trends in 2021: The Story So...
Google Plans Radical New Google Pixel Smartphone Upgrade
Where Did COVID Come From?
Ride To Growth With A Business Vehicle
C3.ai’s Tom Siebel: How To Scale AI
Moz Acquired by iContact Marketing Corp
10 Examples of Brands Using TikTok Stitch and...
Home Technology China’s EV Maker BYD Gets Bad News From DC And Punches Back
Technology 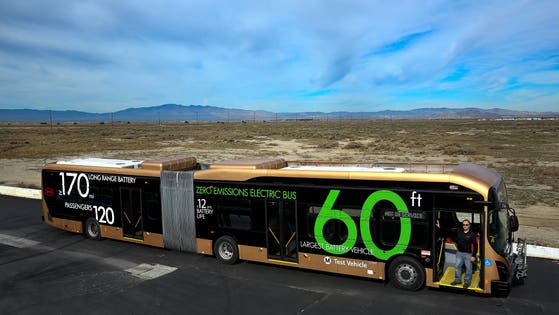 The question of whether U.S. business ties with China are sustainable given distrust over Chinese investment in America is playing out with BYD Motors, the Warren Buffet-backed, Chinese electric vehicle maker located in Southern California.

A defense policy bill is heading to the White House that would bar use of federal funds to purchase buses and rail cars from Chinese companies over concerns about security issues and spying. The restriction would go into effect in two years.

Stella Li, president of the U.S. subsidiary of BYD Company, recently spoke out about the defense bill that targets Chinese transit suppliers. Speaking at a conference in New York City held by the South China Morning Post, she defended BYD by highlighting its contributions toward the U.S. adoption of electric vehicles and pointed out what the impact of a ban would mean in continued advancement of green energy transit.

The action comes at a time when the U.S. and China, the world’s top two superpowers, are locked in issues over cooperation or competition largely focused on technology. BYD, based in Shenzhen, is the world’s largest maker of electric vehicles while Tesla claims that titles for automobiles.

BYD’s Li pointed to three reasons why a potential block is a bad idea and will hurt a company that is already deeply interconnected with the U.S. economy. The ban under the National Defense Authorization Act that passed Congress this week would also impact Chinese rail car maker CRCC.

“BYD is one of the most innovative companies in the world, focused on green energy, she noted. BYD has approximately 1,000 employees in the U.S. and the Lancaster, California plant that produces the electric buses, trucks and fork lifts. “These U.S. workers will be deprived of their jobs,” she said, adding that the company has made substantial investments in worker training at the plant, which, given this cost, is not yet a break even operation. Finally, Li pointed out that China needs to invest in the U.S. to help close the trade gap and that BYD is bringing technology to the U.S. that can help with climate change.

Craig Allen, president of the U.S.-China Business Council, offered his view on the panel with Li that there is a tendency to exaggerate security concerns and threats while adding that what’s needed is a “tall wall around true national security threats.”

As an example of the links between the Chinese company and the U.S., the Los Angeles Department of Transportation recently ordered 130 battery-electric buses from BYD, as part of the city’s efforts to reduce greenhouse emissions. BYD claims the purchase is the single largest electric bus order in the U.S. Other U.S. cities have bought from BYD, such as 31 BYD buses to Indianapolis and recently, 4 additional electric buses to the Kansas City airport.

In a related development, BYD has recently teamed up with Toyota to form a new R&D company based in China to begin working on battery electric vehicles next year. This could be seen as a sign of decoupling, of the U.S. and China going separate ways.

The U.S.-China tech cold war is also spilling over into the drone market. DJI, the world’s leading producer of drones, faces a ban on sales to the U.S. military. Caught in the cross-fires is Huawei, which has been put on a U.S. export blacklist, with some exceptions such as supplying to rural telecom operators.

The view of future U.S.-China relations was put in perspective at the SCMP event, which addressed broad issues over the US-China trade war, its effect on the global economy, the technological race for 5G and AI supremacy, and the possibility of coexistence for two competing ideologies. Former Minister of Commerce of the People’s Republic of China, Dr. Chen Deming, gave a keynote address that highlighted an optimistic view. “Looking back on the 40 years of diplomatic relations between China and the U.S., our scientific and technological cooperation has become the most dynamic part of bilateral cooperation,” he said. “In this relationship, there are both competition and cooperation, but we believe that competition does not necessarily lead to confrontation or conflict.”

‘Fortnite’ Servers Down? Players’ Can’t Log In Ahead of Star Wars Event