Breaking
How, When And Where You Can See A...
New $2.2 Trillion Stimulus Bill Proposed—$1,200 Stimulus Checks,...
Why Do We Do What We Do? Manipulating...
California Brand Goes All-American As Amazon Bans Foreign...
The 3 Best Analytics Companies of 2020
Senator Cory Booker: Supporting Small, Minority-Owned Businesses Will...
Trump’s Taxes Are Finally Leaked—What’s Next?
Washington Heats Up Ahead Of First Presidential Debate:...
Systemic Racism Leads To Disparities In Nursing Home...
The New Regular: Prepare For Conflicts Of Customer...
Web VR.0 – Have VR Websites (Finally) Arrived?...
This Next Evolution Of E-Commerce Did $18 Billion...
This Next Evolution Of Ecommerce Did $18 Billion...
IRS Taxes Most Lawsuit Settlements And Exact Wording...
13 Questions To Answer Before You Die
Just Launched: Long-Term Stock Exchange For Companies Building...
Home Finance China’s Recession Will Hurt As Coronavirus Crisis Spreads To U.S. And Europe
Finance

China’s Recession Will Hurt As Coronavirus Crisis Spreads To U.S. And Europe 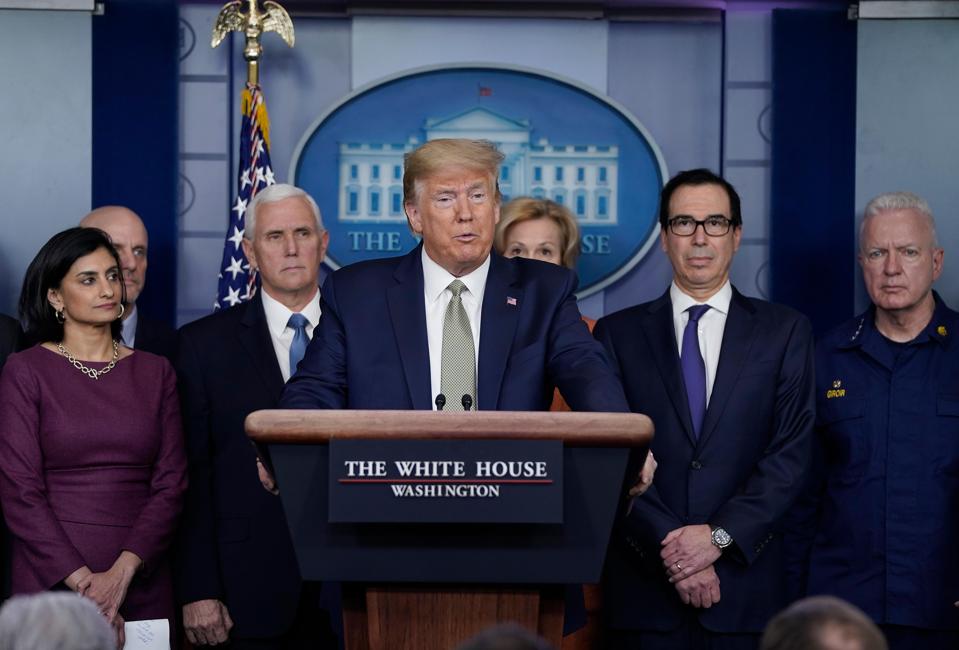 U.S. President Donald Trump, joined by members of the Coronavirus Task Force, speaks about the virus … [+] in the press briefing room at the White House on March 17, 2020 in Washington, D.C.

Donald Trump isn’t happy unless he has a boogeyman to blame for all of his problems. And at a moment when his shaky coronavirus response draws boos, China is making it too easy for the U.S. president.

Trump and his surrogates are beating the “Chinese virus” drum pretty hard as they seek to deflect responsibility. Other variations include “Wuhan virus” and, according to CBS News, “kung flu.” Bottom line, the White House wants Americans to believe that China’s government has put their lives at risk.

Yet Trump would be wise to pay more attention to the next wave of contagion: a fast-unfolding recession in the second-biggest economy that shoulder-checks U.S. growth.

The 5% U.S. contraction that Goldman Sachs predicts in the second quarter has much to do with domestic trauma. With major cities getting locked down and trillions of dollars of stock market losses creating a negative wealth effect, gross domestic product will indeed crater. These immediate risks have the Federal Reserve frantically printing dollars and the U.S. Treasury planning to send checks to households.

The second-wave effects require far more attention, though. And many of those are coming from China’s economy, one that’s losing altitude with each passing day. Beijing’s official GDP numbers in the months ahead are almost meaningless. For an unbalanced, highly indebted financial system at China’s level of development, anything in the 4% growth range is risky territory.

Yes, Beijing has lots of resources, including more than $3 trillion of foreign currency reserves. Yes, China’s government is highly skilled at circling the policy wagons to forestall crisis. Or to at least delay the “Minsky moment,” when a credit-fueled boom goes awry, that befalls all industrializing nations. But China, remember, has yet to pay the tab for its post-2008 recovery.

The tens of trillions of dollars or public and private debt added since then kept annual GDP above 6%. Though China’s 2019 growth rate of 6.1% was the slowest in 30 years, it was a reminder of just how good China Inc. is at withstanding global turbulence.

Xi Jinping’s team achieved that pace despite a two-year trade war devastating supply chains and stymying China’s export engine. Yet it now simultaneously confronts coronavirus fallout and the loss of the American consumer for the foreseeable future. It’s actually a triple-whammy when you add in the still mounting costs of Trump’s trade war.

As Trump struggles to pull Wall Street back from the brink, he should consider suspending all taxes on Chinese imports, steel and any other curbs on commerce. His team could easily argue that Xi’s government learned its lessons and spin a ceasefire as a pragmatic response to new realities.

But will he? Sadly, the odds aren’t great. Advisor Peter Navarro, co-author of “Death by China” still has Trump’s ear. Trump also fears losing support from the nativists among the Fox News-anchor crowd. Even so, those taxes are contributing to the headwinds zooming China’s way.

So are threats of additional measures to come. Granted, there’s plenty of blame to go around. Case in point: China expelling journalists from the New York Times, Washington Post and Wall Street Journal, marking a ratcheting up of tensions. It’s not hard to expect Trump to respond in kind, increasing the number of tit-for-tat actions that could make headlines in 2020.

Asia also remains worried about new tariffs ahead of November elections. As growth plunges and Trump reaches for scapegoats, he could make good on threats to slap 25% taxes in imports of cars and auto parts. Or direct the Treasury Department to drive the dollar lower for a trade advantage.

Any of these steps would add to China’s 2020 trauma. Beijing will find that reviving growth after the 2008-2009 global crisis was much easier than today. An infrastructure boom of the kind China unleashed post-Lehman Brothers crash won’t have the same multiplier effect this time.

Nor can rate cuts by the People’s Bank of China reap the same dividends. For more than a decade now, the globe’s biggest monetary authorities held rates at, or close to, zero. Like any kind of stimulant, this monetary medicine loses potency over time, requiring ever-bigger doses. At the same time, globalization makes it harder to ensure liquidity stays close to home.

Taken together, China faces a rockier 2020 than global markets appear to be pricing in. Where are the growth engines in the six-to-12 months ahead? The U.S. is reeling, Europe is in turmoil and Japan just came off a quarter in which GDP cratered an annualized 7.1%. 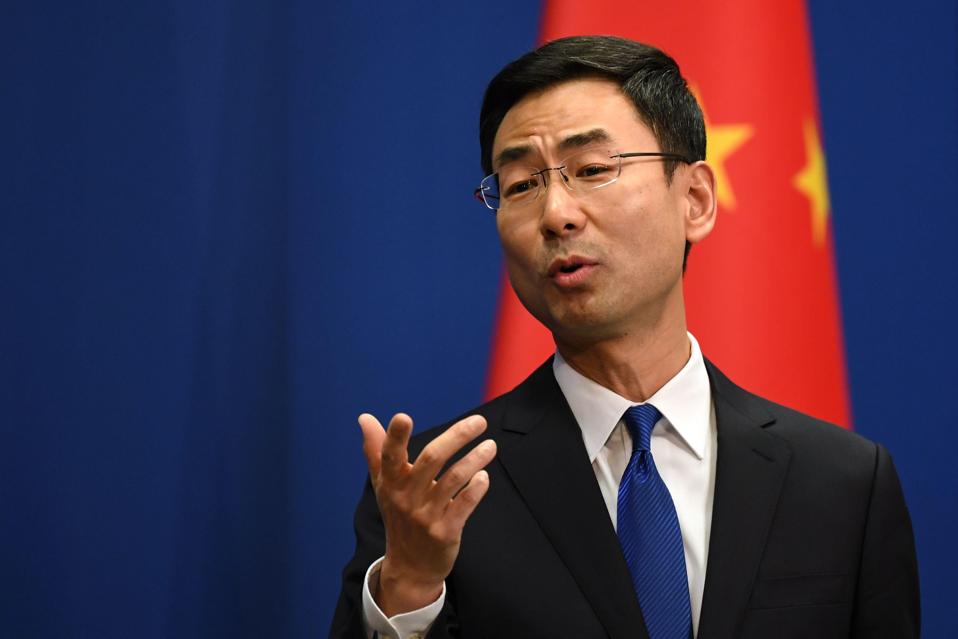 Chinese Foreign Ministry spokesman Geng Shuang speaks during the daily press briefing in Beijing on … [+] March 18, 2020. China on March 18 announced it would expel American journalists from three U.S. newspapers in one of the communist government’s biggest crackdowns on the foreign press.

The enmity between the U.S. and China may only increase in the month ahead. Beijing is howling in protest over the White House’s “Chinese virus” mantra. Trump World is lashing out at Chinese conspiracy theories about the U.S. military starting the COVID-19 pandemic. Not a great backdrop for trust and cooperation.

With any luck, Trump will give multilateralism a try. On Monday, he participated in an emergency conference call with Group of Seven peers. It’s a good start, even if the G7 opted against bold joint action. The real key, though, is the Group of Two—the U.S. and China—agreeing on a truce.

In the meantime, the dramatic collapse of Chinese activity will continue to roil markets—and act as a warning for the rest of the globe. Case in point: a 13.5% drop in industrial production in the first two months of 2020. Retail sales in the most populous nation fell 20.5% in the same period. And that’s not a typo.

Granted, the U.S. is sure to see some truly ghastly numbers in weeks and the months ahead. But the specter of China running into recessionary territory is among the most unsettling turn of events this year. It’s not clear global investors are any more prepared than Xi’s crisis managers in Beijing.

The World’s Most Expensive Cities [Infographic]