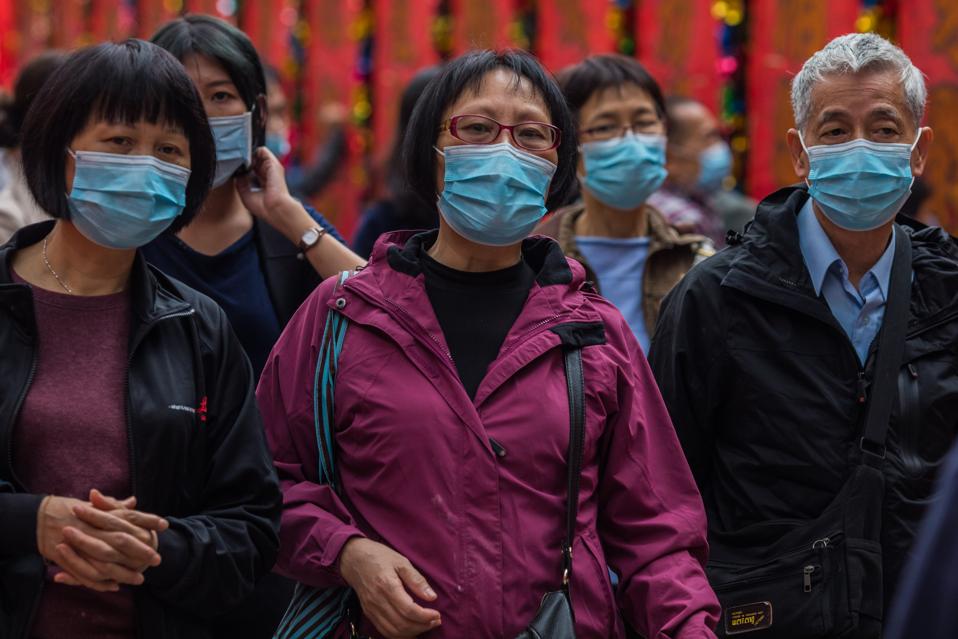 The Year of the Rat kicked off with a foodborne viral infection spreading in central China and … [+] beyond. Hong Kong declared a state of emergency on Saturday. (Photo by DALE DE LA REY / AFP)

There is no rest for the weary. If there was ever the perfect time to take profits on China, now is the time.

China’s economy is set to double in size in 2020 versus where it was 10 years ago, but all of that will be put on hold if the coronavirus is not stopped soon. China’s government announced travel restrictions during the Lunar New Year celebrations and a special team set up to handle the outbreak was announced on Saturday. Chinese premier Li Keqiang is now in charge of controlling and stopping the spread of the virus, which has now killed 56 people as of Sunday morning.

Barclays Capital expects that the outbreak will reduce first quarter GDP by just around 0.2 percentage points as holiday travel and spending is impacted.

The phase one trade deal and fiscal stimulus over the last several months has helped China weather the trade war, but that reprieve will be undercut if this becomes another version of the 2003 SARS crisis. So far, the outbreak is nowhere near that crisis level.

China’s 2019 GDP is expected to have beat market consensus estimates of under 6% and come in at around 6.2%.

China’s stock market has been in retreat since coronavirus became as big a headline as the Trump impeachment trial this week.

The U.S. stock market is also falling after weeks of gains. Early signs suggest that quant fund algorithms hunting for key words like “outbreak” or even “coronavirus” are triggering sell offs in travel stocks. American Airlines shares fell over 4% on Friday. China’s CTrip International, now known as Trip.com Group, saw its shares fall by 6.9% on Friday.

Guan Yi, a virologist who helped identify severe acute respiratory syndrome (SARS) in 2003, was quoted saying in The Washington Post that the spreading of coronavirus “could be 10 times bigger than the SARS epidemic because that virus was transmitted by only a few super spreaders in a more defined part of the country.” 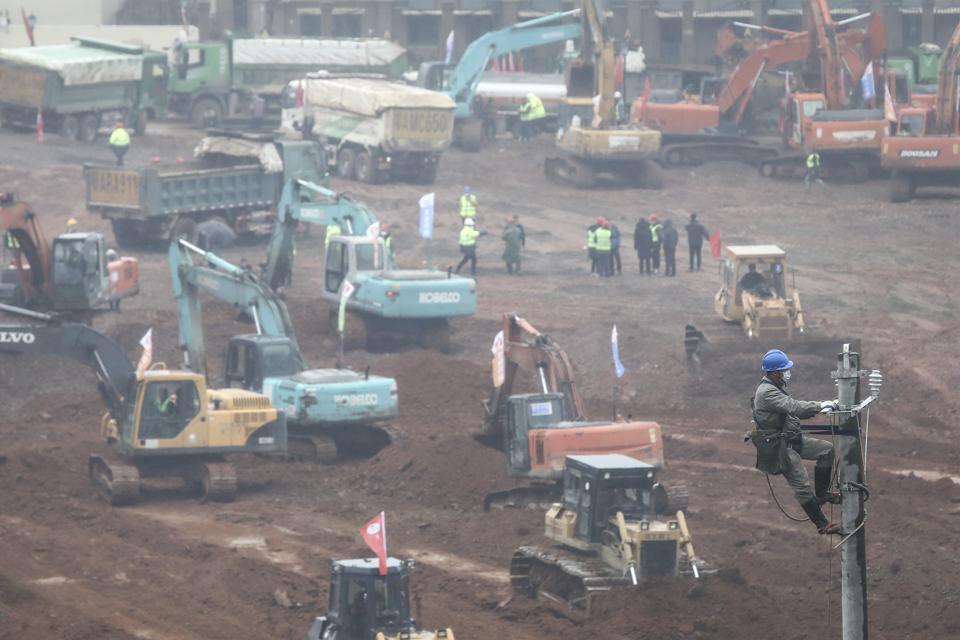 An electrician sets up wiring while construction workers drive excavators at the site of a new … [+] 1,000-bed field hospital being built to accommodate the increasing number of coronavirus patients on January 24, 2020 in Wuhan. The hospital is set to be completed by February 3, 2020. (Photo by Getty Images)

“We are trying to get away from over extrapolating the impact on the markets right now.”

Coronavirus causes respiratory infections like SARS and the body can often fight it back like the cold or flu. In rare cases it can lead to deaths, which is what is happening with this particular strain out of Wuhan, China.

China’s government is building an emergency hospitals in Wuhan with some 1,000 beds that is reportedly expected to be operational within the next two weeks.

President Trump praised Xi Jinping on Twitter over the weekend, saying China was containing the outbreak. So far only a handful of people who have traveled to Wuhan and returned home have been contaminated by the virus. A person returning from Wuhan to southern California is the third case of the illness in the U.S., reported today.

Residents of Wuhan are on lockdown. Though some have tried to leave before restrictions went into place.

Early last week, around 600 cases were reported. It tripled as of Sunday to over 2,000 with 2,700 people under observation in Wuhan for exhibiting symptoms of the virus, according to a report in the South China Morning Post today.

Of the known cases, 25% were considered severe as of January 23, according to the World Health Organization. It is unclear what the number is now though everyone suspects it will rise.

Agathe Desmarais, global economic forecaster for The Economist Intelligence Unit, says if this turns into something akin to the SARS outbreak, it could reduce China’s real GDP growth in 2020 by half a percentage point for the year, taking the official growth number under 5.5% for the first time ever.

News of the outbreak came on December 8. The market ignored it until late last week when two cases were found in the U.S.

Now that people have the virus in the U.S., it is stoking fears of a pandemic. The number of people infected with the virus in China almost increased tenfold in the past few weeks, with the outbreak spreading from Wuhan to almost all provinces. 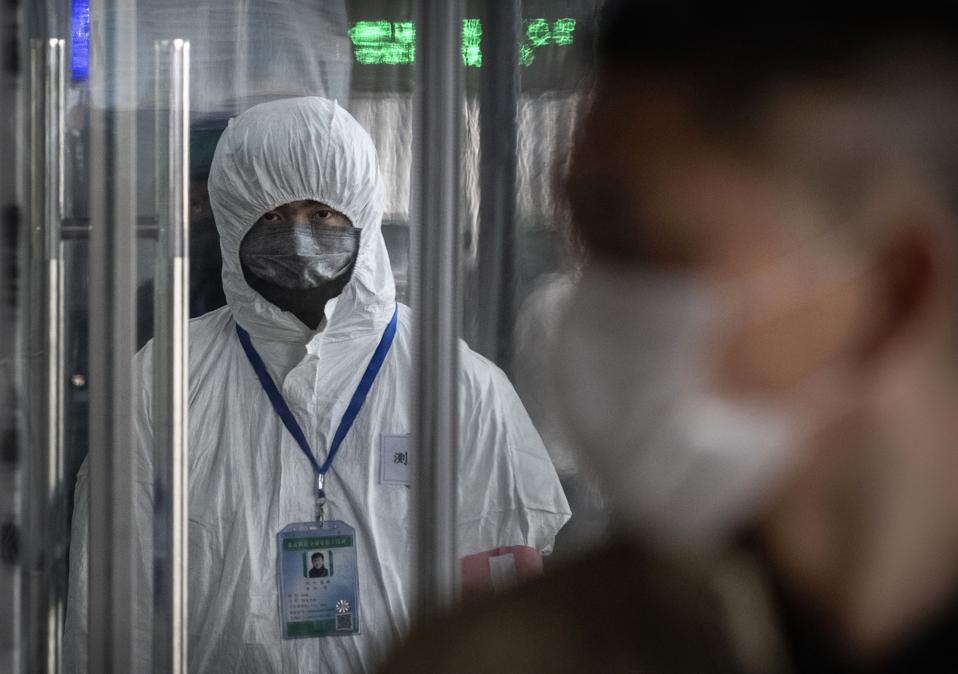 A Chinese health worker waits to check the temperature of travellers entering a train in Beijing. … [+] The number of cases rose to over 1,300 in mainland China on Saturday . (Photo by Kevin Frayer/Getty Images)

Beware of the doomsayers.

Barclays said in a note to clients on Friday that there was a risk of the outbreak spreading wider and infecting more people than SARS.

Some 8,096 global cases were reported worldwide, with 774 deaths.

During the Lunar New Year travel season, about 300,000 and 800,000 Chinese travel through Wuhan’s train stations and airport, respectively.

This suggests that from January 10 until all transportation was halted in Wuhan on January 23, there could have been between 4 and 5 million people departing Wuhan, Barclays estimates.

Compared to the SARS outbreak that was mainly concentrated in Beijing, Guangdong, and Hong Kong, the increased mobility of Chinese people now versus then could bring more challenges to control the spread of the virus.

Nevertheless, those three cities are widely considered the epicenters of Chinese commerce and mobility, which is not the case with Wuhan.

Markets will be watching this closely.

It will give many funds managers, especially the quant funds, a reason to sell. The Dow is back under 29,000 after inching closer to 30,000. China will sell off even more on bad headlines, setting up a buying opportunity once the case numbers fall. 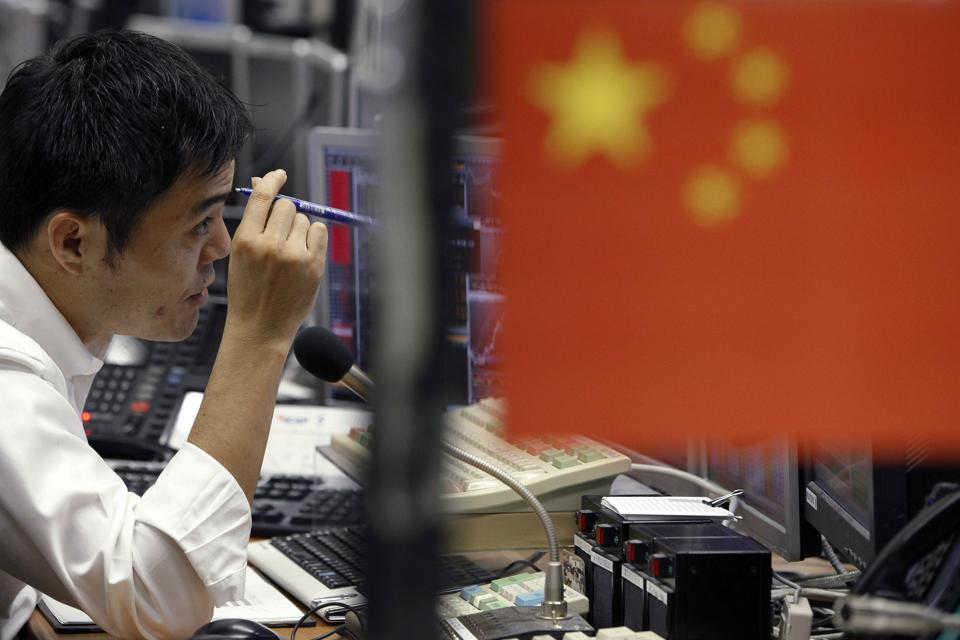 The study, done in collaboration with the World Economic Forum and the Bill and Melinda Gates Foundation, predicted the virus coming out of Brazilian pig farms.

The study imagined that a pandemic outbreak could see 65 million people infected within 18 months. It was not a forecast, nor a prediction that this is plausible with the Wuhan virus as their test case was a more potent coronavirus than the so-called 2019 novel coronavirus coming out of China.

China’s economy was firing on all four cylinders until this happened.

“We are trying to get away from over extrapolating the impact on the markets right now,” says Michael Reynolds, the investment strategy officer at Glenmede, a wealth manager with around $40 billion under management. “Unless the virus spreads and things get really bad, then it shouldn’t be dominating anyone’s investment decisions at the moment,” he says.