Home Finance Christmas Dinner, The Christmas Proclamation, And A Few Words On Culture And Policy
Finance

Christmas Dinner, The Christmas Proclamation, And A Few Words On Culture And Policy 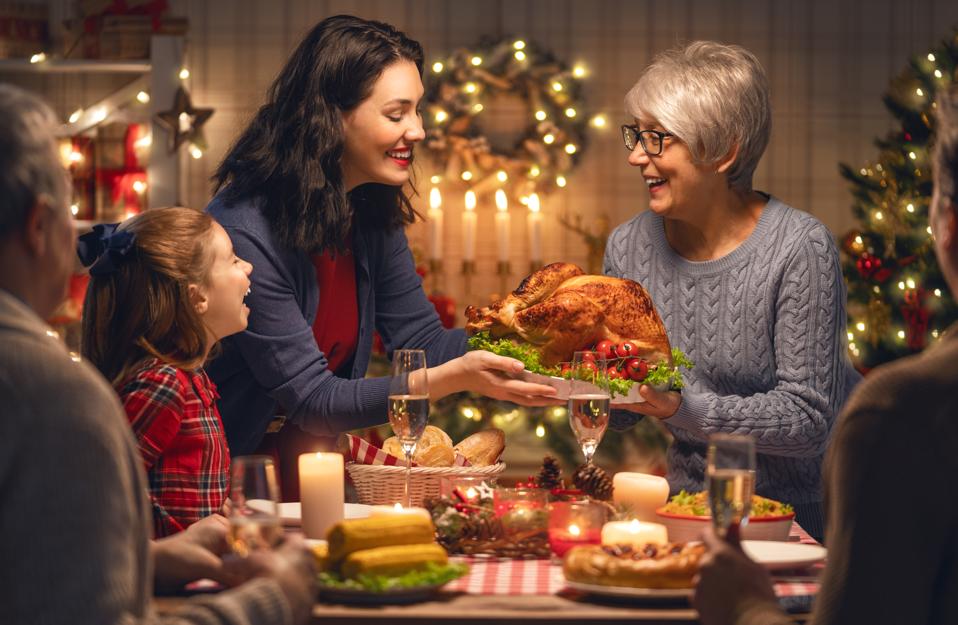 A few days ago, I asked my twitter followers to share with me their traditional Christmas meals.

“My mother did ham. My grandmother has switched from ham to prime rib.”

“Traditional is Turkey . . . but since it will be smaller (13) group this year, my wife is doing Lasagna and a Chicken dish.”

“My family is from southern Italy so we go with the fish on Christmas Eve.”

“My grandmother made roast beef (as an American food) and an array of Syrian dishes – string beans (with lamb), grape leaves stuffed with rice (and lamb), hummus (sometimes topped with lamb) and heaps and heaps of Syrian pastries.”

“My traditional Christmas dinner is beef rouladen, with all the trimmings. It’s been made the same way for the last 40 years, since the recipe was shown to me.”

Which is about what I expected: the traditional turkey with all the trimmings at Thanksgiving has no counterpart at Christmas; instead, families choose to continue traditions brought with them from the Old Country or regional traditions, or might choose something entirely new — or new-to-them.

Is this an example of the magnificent diversity and multiculturalism present in America?

At the same time, 90% of Americans surveyed by Pew in 2017 reported that they celebrate Christmas in some fashion or another. Although it is true that Millennials are considerably more likely to consider Christmas to be a “cultural” rather than “religious” holiday, compared to older generations, there is no substantial difference in the percent of those responding “yes” to the overall question by age — 88% of Millennials do so relative to 90% of Baby Boomers and 92% of Gen X.

Is this an example of something that unites (almost all) Americans?

Let me offer a third example: the “Christmas Proclamation,” as used by the Roman Catholic Church and certain other “high church” denominations, such as the Episcopalians. Here’s the current English text:

“The Twenty-fifth Day of December,

when ages beyond number had run their course from the creation of the world,

“when God in the beginning created heaven and earth, and formed man in his own likeness;

“when century upon century had passed since the Almighty set his bow in the clouds after the Great Flood, as a sign of covenant and peace;

“in the twenty-first century since Abraham, our father in faith, came out of Ur of the Chaldees;

“in the thirteenth century since the People of Israel were led by Moses in the Exodus from Egypt;

“around the thousandth year since David was anointed King;

“in the sixty-fifth week of the prophecy of Daniel;

“in the one hundred and ninety-fourth Olympiad;

“in the year seven hundred and fifty-two since the foundation of the City of Rome;

“in the forty-second year of the reign of Caesar Octavian Augustus, the whole world being at peace,

“JESUS CHRIST, eternal God and Son of the eternal Father, desiring to consecrate the world by his most loving presence, was conceived by the Holy Spirit, and when nine months had passed since his conception, was born of the Virgin Mary in Bethlehem of Judah, and was made man: The Nativity of Our Lord Jesus Christ according to the flesh.”

Wikipedia provides the prior 16th century text, in which specific years were assigned to time since the creation, the flood, the birth of Abraham, etc., to the birth of Jesus. The proclamation was removed with the liturgical reforms of the 1960s, then restored by Pope John Paul II in 1980 with the altered text. And the proclamation itself dates to the early Middle Ages, which church fathers had worked out, to the best of their abilities, the birth of Jesus relative to historical events from not just Jewish history and the Bible but from the Greeks (the Olympics) and the Romans (the founding of Rome).

And this, too, has to do with culture, and a deeper layer of culture that we don’t necessarily have the same awareness of as these more superficial and visible items such as traditional foods or celebrations. Every now and again I revisit the book Riding the Waves of Culture, by Fons Trompenaars and Charles Hampden-Turner (1998, McGraw Hill), which focuses on culture from a global business perspective, and which provides a deeper level of understanding of cultural differences across seven dimensions: five “relational orientations” of

Now, with respect to time, the onetime self-proclaimed expert on diversity at my former employer liked to use as a favorite example of the importance of understanding across cultures, the differences in timing expectations of a German (an event starts when you say it does) and a Latin American (no one shows up for a party until well after the specified start time). But what these authors refer to is a much bigger-picture orientation — having to do with how a given culture thinks about the past, present, and future. They write,

“Especially important is whether our view of time is sequential, a series of passing events, or whether it is synchronic, with past, present, and future all interrelated so that ideas about the future and memories of the past both shape present action” (p. 123).

In other words, for a Catholic priest to proclaim this text situating the birth of Jesus among these other historical events — and for, in its current status as quasi-optional, some churches in some countries to incorporate it, and others not, and for it to resonate with some cultures but not others — is a deeper aspect of culture, of the sort that is much more invisible to us.

After all, we’ve got multiple presidential candidates promising massive boosts to our social welfare/social insurance system — increases in government child care provision, government-provided healthcare, boosts in Social Security benefits, etc. And a typical skeptical response to “we should be Iceland” is “we’re too much bigger than Iceland to copy them,” which is missing the point. But it is nonetheless the case that in addition to looking at countries we might wish to copy and trying to gain a complete picture of their system, and the good and the bad, and likewise understanding other such instances as illustrations of pitfalls, it is likewise important to understand how our culture in America, in terms of these deeper dimensions, plays into all of this. And a system which might work perfectly well abroad might not, here, due to these cultural differences — and, similarly, exporting some characteristic of our society and economy elsewhere might have similar problems.

And, yes, this is really, really hard to do because these dimensions of culture are so hard to see, like the proverbial fish not knowing they are in water.

Don’t Abandon Your Employees: The Solution To The...