Breaking
Everything You Need to Know About Corporate Social...
Is Adaptive Leadership the Key to Motivating Employees?
Why business events are set to return with...
Business events set to return with a bang!
Expanding Internationally: 5 Things to Consider for eCommerce...
How the Machine Shop Is Going Digital in...
Sustainable Food Packaging Is Helping the Hospitality Sector...
Top 5 Investment Practices To Make More Money...
Managing IT Requirements for SMEs: 5 Aspects that...
How To Build a Successful Luxury Brand In...
Finding The Best Google AdWords Consultant for Your...
8 Top Tips To Help Your Agricultural Business...
Three Reasons Why Office Décor and Design Are...
Looking To Improve Efficiency In Your Business? Here’s...
AI and machine learning for business
How Social Media Changed the World
Home Technology Cisco Increases Its Societal Impact As Documented In Its 2019 CSR Report
Technology 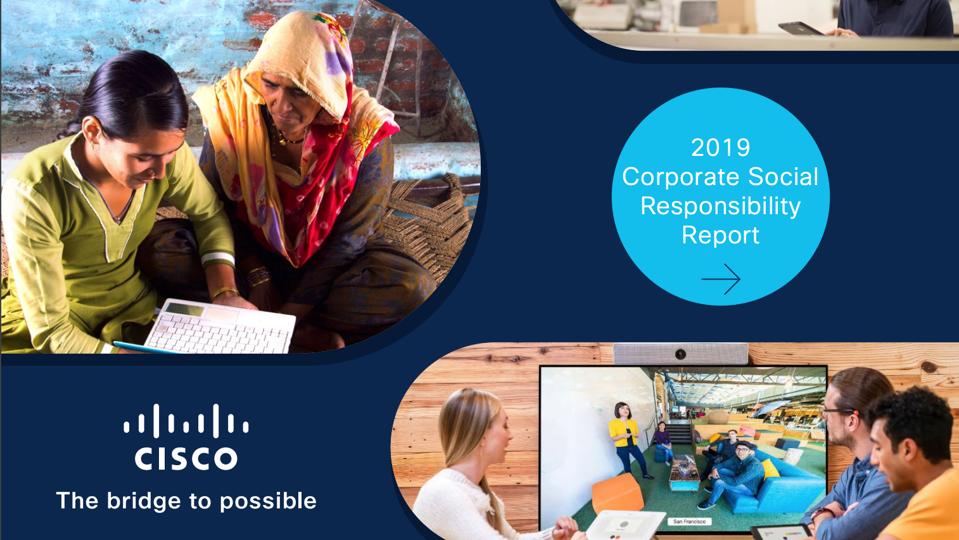 As leading a technology industry company, I have the blessing to cover a wide range of topics. While new technology releases and developments certainly make up a large portion of my coverage, I also like to devote time researching the human side—company culture and CSR, for example.

While Cisco Systems is indisputably on the leaderboard with its networking, UC, and security portfolio, it sets a gold standard of technology CSR, with key initiatives such as its Networking Academy, its ingenious partner program, and its TacOps disaster response team. The company recently released its 2019 CSR Report, the company’s annual progress update on its wide-reaching, best-in-class CSR program. Let’s take a closer look at what the company has accomplished over the past year and how it’s progressing towards its various goals and commitments. 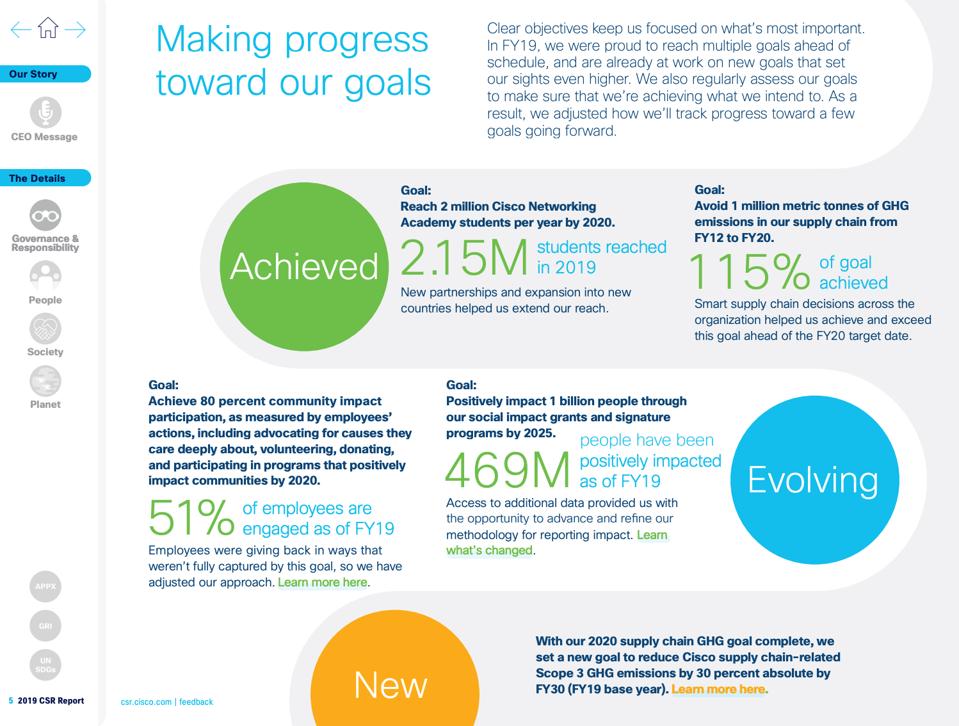 Cisco’s overarching goal, established back in 2016, is to positively affect 1 billion people worldwide by the year 2025 through its social impact grants and signature programs.

Last year’s report (see my coverage here) brought the news that Cisco was already 45% there, very much ahead of schedule, with an annual impact of 209 million. This numbers were retroactively adjusted down a bit over the past year, as Cisco reevaluated how it measures progress and impact and adopted a more conservative approach. The company’s new methodology found that the company impacted 118 million in FY16, 100 million in FY 17, 123 million in FY18, and, drumroll—128 million people in FY19. According to this year’s report, Cisco has now cumulatively positively impacted over 469 million people since 2016—still ahead of schedule. This represents 47% of their 2025 goal.

The fact that Cisco decided to reevaluate how it measures progress and walk back previous high numbers says a lot about the company, in my opinion, and its commitment to making a real difference. Lesser companies just looking for good optics would have stayed the course and reached their target goal sooner, with less effort, and with less of an impact. That’s clearly not Cisco’s modus operandi. I was struck at just how serious the company was when it briefed me on that, and I kept thinking “that’s so Cisco.” By that I mean so honest and full of integrity.

Now let’s break things down further and look at the progress of some of Cisco’s specific CSR initiatives.

Networking Academy is one of Cisco’s flagship CSR initiatives, and I’ve written on it fairly extensively in the past (see here). By partnering with schools, governments, and non-profits across the world, Cisco’s Networking Academy trains millions of students in information and communication technology (ICT) skills every year. This year’s CSR report carried the huge announcement that in 2019 the company reached and exceeded its goal of training 2 million students through its Networking Academy by the year 2020—the official 2019 number is ~2.15 million. Cisco says it was able to achieve this through new partnerships and by extending its reach into new countries.

One of Cisco’s newer initiatives is its partnership with Destination: Home, an organization that seeks to combat homelessness in Santa Clara County, CA. In 2018, the company committed to donating $50 million to the organization over the following 5 years, to go towards building supportive housing (domiciles with built-in social services) and programs designed prevent people from becoming homeless. The 2019 CSR report notably shared some progress metrics from the first year of this partnership with Destination: Home. Cisco announced that Destination: Home’s Homelessness Prevention program helped 841 families and individuals over the past year. Furthermore, 71% of those enrolled in prevention programs were able to receive financial aid within a mere 72 hours of applying to them. Impressively, 95% of families that received prevention services in 2019 remain stably housed. In addition to these numbers, Cisco also shared that, with its backing, Destination: Home will build over 1,200 housing units.

I am personally looking at this effort as this would be one of the only homeless programs working as taxpayers would expect, unlike what I believe is happening in San Francisco under London Breed’s leadership and in Austin under Mayor Adler’s leadership.

Cisco also shared progress from its partnership with Digital Green to increase economic opportunity for smallholder farmers who often struggle financially. With sponsorship from Cisco, Digital Green’s Loop app helps these farmers aggregate their produce and get it to markets for the best prices. According to the report, farmers utilizing the Loop app achieved an average 17% increase in gross income.

In addition to these humanitarian efforts, Cisco Systems also made significant inroads in its efforts to reduce its environmental footprint and adopt more sustainable practices. Chiefly, the report announced that the company had reached and surpassed its goal (by 115%) to avoid 1 million metric tonnes of greenhouse gas emissions from its supply chain between the years 2012 and 2020. Furthermore, the company announced a new goal to cut down on Cisco supply chain-related Scope 3 greenhouse gas emissions by 30% absolute between 2019 and 2030. I wouldn’t bet against Cisco’s ability to accomplish this.

This year’s CSR report also touted Cisco’s various efforts to engage in the circular economy. This included the so-called “No Paint Project,” an effort by the company to stop using oil-based wet paints on its Catalyst 9200 and 9300L products. Additionally, it announced it had produced 2.72 million 7800 IP phones utilizing 35% recycled content plastic, a move the company claims avoided using 456 metric tonnes of virgin plastic. The last example offered in this vein was the companies initiative to use replace disposable pallet wraps with reusable ones, which, in addition to saving money and avoiding carbon admissions, purportedly kept 79,000 pounds of plastic out of the landfills in 2019.

Additionally, the support offered several other examples of sustainability solutions it has helped sponsor—smart parking solutions in Paris, which Cisco says has cut down on congestion of 30%, 75% energy savings from smart lighting solutions in Romania, and work with the city of Las Vegas exploring the use of sensors to route autonomous shuttles to public transit stops.

Cisco also mentioned its ongoing efforts to make sustainability improvements to its facilities. Since 2007, the company has been working to reduce its Scope 1 and 2 greenhouse gas emissions by 60% by 2022, and to purchase 85% of its global electricity from renewable sources by the same year. According to the report, Cisco’s U.S. facilities already run on 100% renewable electricity, which is very impressive. Also, Cisco announced that it plans to reach water neutrality—the balance between demand and supply of water—in its facilities sometime in 2020. Additionally, Cisco announced that in 2019 it diverted 68% of its waste away from the landfill.

While Cisco doesn’t manufacture nearly anything near what an Apple and Dell Technologies would create, every savings counts.

Lastly, the report touched on the company’s commitments to improving its own workplace and company culture for its employees. A big part of this is Cisco’s mental health initiatives and its stated goal of ending the taboo of talking about mental health. These efforts include improving access to mental health care in its employee medical plans so that they offer the same co-pay in and out-of-network. Cisco also announced an increase to 10 free, 24/7, confidential counselor visits per employee (in the U.S.) through its Employee Assistance Program. Additionally, the report touted Cisco’s intranet Safe to Talk community, which gives employees links to internal and external mental health resources as well as access to employee stories.

Another big move in this area of CSR was Cisco’s announcement of its “Conscious Culture” framework earlier this year. Basically, Conscious Culture consists of three prongs—fostering an inclusive, diverse environment, fostering certain company-wide beliefs, behaviors and principals, and improving the everyday interactions employees have with their colleagues and management. I won’t delve too much deeper on Conscious Culture here, but I published a deep dive on the framework when it was announced that you can find here.

As it is every year, Cisco’s 2019 CSR report was wide-reaching, exhaustive, and a perfect example of Cisco’s impressive acumen in this area. The company met several long-standing goals, set bold new ones, and made significant progress towards its big one to impact 1 billion by 2025. Cisco’s annual progress reports are a major differentiator of the program in my mind, as they offer transparency, ensure accountability, and, of course, provide great PR for the networking powerhouse. Other companies should be taking notes—this is what a successful CSR program looks like. I can’t wait to see what the new year holds in store for Cisco CSR as the company keeps pushing the envelope.