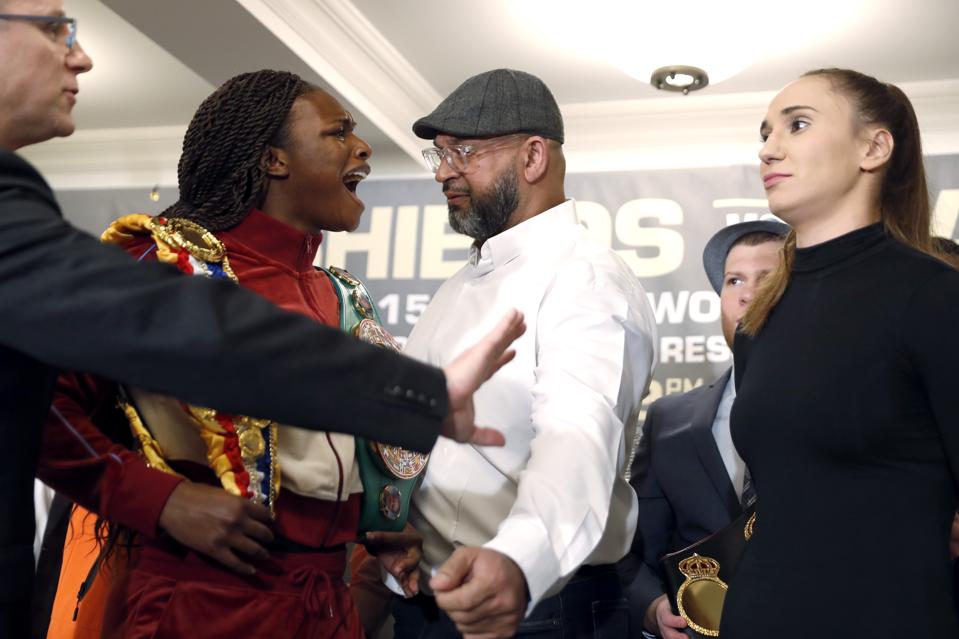 NEW YORK, NEW YORK – JANUARY 07: Claressa Shields and Ivana Habazin argue during their face off at a … [+] press conference at Hotel Plaza Athenee prior to their January 11th, 2020 WBO 154-pound title fight at the Ocean Casino Resort in Atlantic City, NJ on January 07, 2020 in New York City. (Photo by Michael Owens/Getty Images)

For most boxing events, those are the widest odds you’ll see.

So, if you want to place money on this fight, it’d be more interesting to wager on a prop bet.

As for the odds for the co-feature:

Look, unless you have some kind of personal connection with Habazin, there’s really no way you’re going to pick her to beat Shields. I’m 99.9 percent sure Shields is going to win. The only question for me is whether Shields will knock her out. For all of Shields’ greatness, she doesn’t have great power (only two knockouts in nine fights). But she’s talked about stopping Habazin by the sixth round. Personally, I don’t think that’ll happen. I think Habazin will survive the distance and lose a unanimous decision, somewhere in the 99-91 range.

Claressa Shields and Ivana Habazin do not like each other. The two were scheduled to fight in October, but after Habazin’s trainer, James Ali Bashir, was attacked at the weigh-in for that bout, the event was postponed.

Now, Habazin doesn’t like Shields, especially after Shields’ brother was arrested and charged with the assault. And Shields doesn’t like Habazin because of the way Habazin verbally responded to the attack on her coach. It’s been one big mess between the two.

“I feel like I’m fighting for James Ali Bashir, as well as for my own pride and respect,” Habazin said.

Said Shields: “The [main] reason why she gets no respect is how she carried herself after the incident,” Shields said, via BJPenn.com. “She started playing the victim, trying to call me a thug, like I had anything to do with the incident. She wasn’t being a sports-like person, not understanding that we both trained hard to make that fight happen. The incident didn’t just affect her, it affected me also.”

Luckily, after two hospital stays, Bashir is recovering, and his fighter will get the chance to battle for a junior middleweight title vs. Shields—who will try to become the fastest boxer, male or female, in history to win three world titles in three weight divisions.

In the fourth fight of her pro career, the two-time Olympic gold medalist won a super middleweight belt, and four fights after that, she became the undisputed middleweight champion. Now, she’s dropping down in weight again to try to conquer a new weight class.

“I just try to keep carrying women’s boxing the best way that I can,” she said. “I’m regarded as a top-10 fighter in boxing already with only nine fights. When you have that kind of pressure, you have to go out and not be average. Skill-wise, there’s not a woman that can compare to me. I can do everything. I can box, I can brawl, I can stand in front of you toe-to-toe. When I win this fight I’m just going to get a little bit louder with: She’s the GWOAT, Greatest Women Of All Time. Put it there. I claim it.”

Regardless of the outcome—and the way these two pugilists feel about each other—I’ll be here for the night, giving my round-by-round thoughts, explanations and unofficial scoring on the Showtime card (which begins at 9 p.m. ET).

Adina Reyter Serves Up Happiness With Her Diamond Jewelry

If You Want A Porsche Taycan In Audi...

How To Boost Your Company’s ESG Profile

Gerrit Cole’s Signing With Yankees Will Be True...

Drinking Rosé Wine On A ‘Luxury Yacht’ In...