The global economy needs power to enable it to function. For a century, the cheapest, most efficient way to do that was to burn fossil fuels to produce steam to turn a turbine. But not any more. 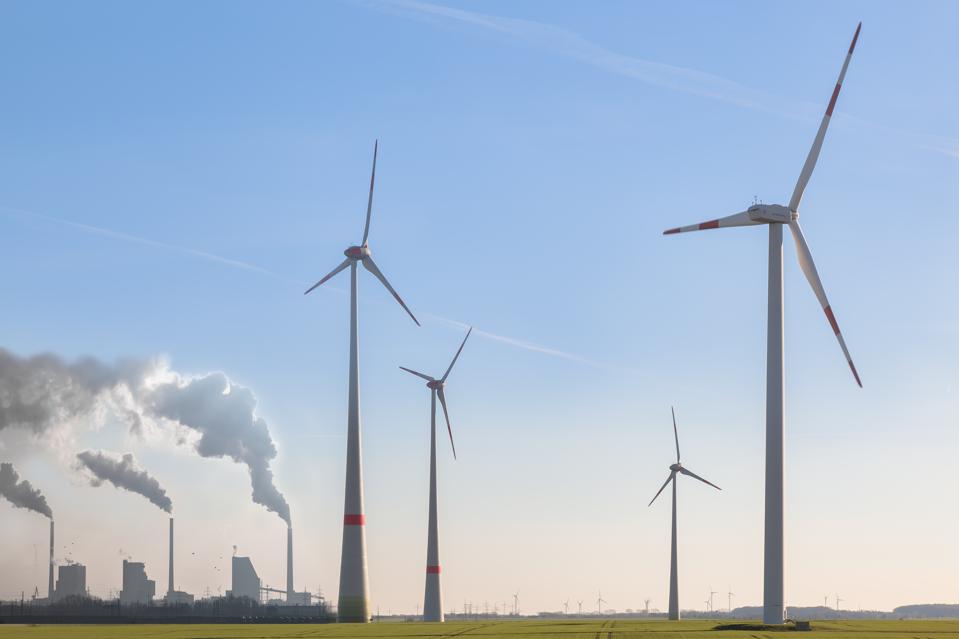 Wind Turbines in front of a coal-fired power plant.

The dominance of fossil fuels has come under growing pressure from clean power sources in recent years. At the start of the renewables revolution, technologies such as solar and wind were much more expensive than coal and gas, but a tipping point has been reached.

When it comes to building new generation capacity, it is cheaper to build renewable energy projects than new coal plants – which have previously been the cheapest form of power generation but also the most polluting – in every major market in the world, a new report says.

In the report, How to waste over half a trillion dollars: The economic implications of deflationary renewable energy for coal power investments, financial think tank Carbon Tracker warns that developers of coal-fired power stations risk wasting more than $600 billion on new coal plants when they could generate power more cheaply from renewables.

The report finds that even for coal power plants that are already built and in operation, it would be cheaper to build new clean power capacity than produce power from those coal facilities in 60% of cases. By 2030 at the latest, it will be cheaper to build new wind or solar capacity than to continue operating coal in every single market in the world, Carbon Tracker says.

“Renewables are outcompeting coal around the world and proposed coal investments risk becoming stranded assets which could lock in high-cost coal power for decades,” said Matt Gray, Carbon Tracker’s co-head of power and utilities and co-author of the report. “The market is driving the low-carbon energy transition but governments aren’t listening. It makes economic sense for governments to cancel new coal projects immediately and progressively phase out existing plants.”

Limiting global warming to 1.5°C will require global coal use in electricity generation to fall by 80% from 2010 to 2030, the Intergovernmental Panel on Climate Change reports. This means one coal plant needs to retire every day until 2040, , adds Sriya Sundaresan, co-head of power and utilities and co-author.

Around the world, 499GW of new coal power capacity is planned or already being built, at a cost of $638 billion, but Carbon Tracker warns that governments and investors may never recoup their investment because it typically takes 15 to 20 years for coal plants to cover their costs.

Coal’s cost-competitiveness has fallen because the price of wind and solar has dropped rapidly over the last decade, while coal has to bear the expense of complying with carbon and air pollution regulations. Coal is closest to becoming obsolete in the EU thanks to a strong carbon price and years of investment in renewable energy. Excellent renewable energy resources in the US, low capital costs in China and least-cost policymaking in India, mean they are not far behind. 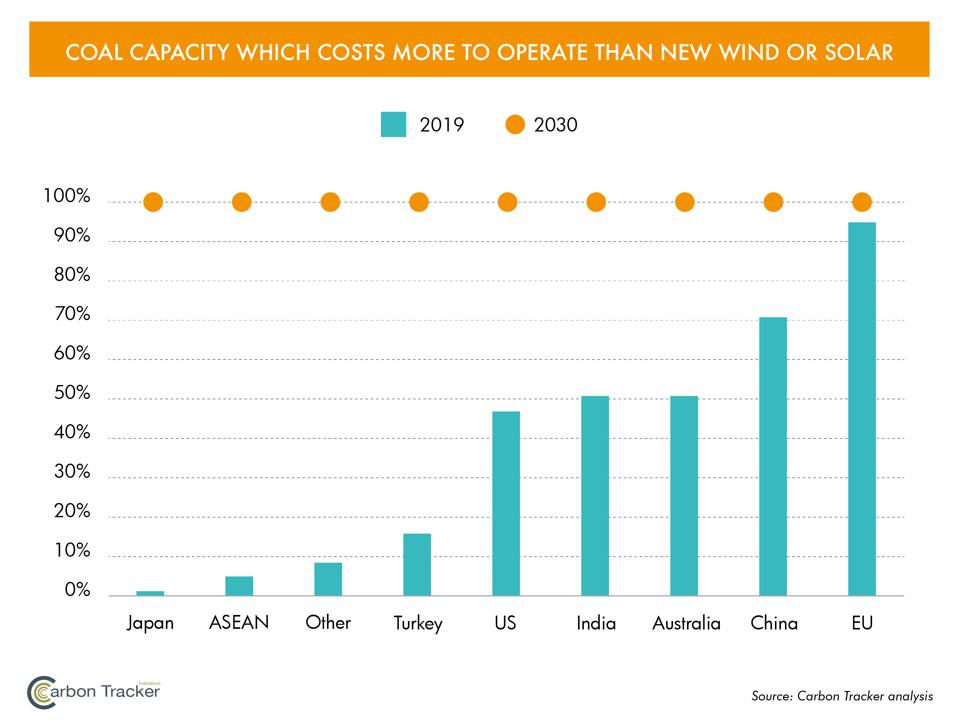 The report highlights that coal is uncompetitive even in the world’s biggest markets for the commodity. China is building 100GW of coal capacity with another 106GW planned, yet 71% of the 928GW of capacity that is already in operation is more expensive than new renewables facilities would be.

In south east Asia, some 78GW of coal power is planned or in construction at a cost of $124 billion, but by 2030 it will be cheaper to build new renewables than continue operating existing coal plants, Carbon Tracker says.

It is a similar picture in India, where 66GW is being built or planned but half of existing capacity is already costlier than new clean power. Some $80 billion is at risk. In the EU, virtually all – 96% – of existing coal-fired capacity is more expensive than renewables, although far less new capacity is being built – just 7.6GW, mainly in Poland and the Czech Republic, at a cost of $16 billion. This is due to a combination of the EU’s carbon price and strong support for investment in renewables.

Astonishingly, the market best protected from this trend is the US, where almost half of the nation’s 254GW of existing capacity is more costly than building new renewables but not a single new plant is planned, despite President Trump’s promise to save the coal industry. The reason for this is a combination of lower clean energy costs and the extraordinary rise of the shale gas sector, which has driven down prices for gas-fired power.

“The report will provide ammunition for the growing number of investors pressing financial institutions and companies to align their portfolios with the Paris climate agreement,” Carbon Tracker points out.

“Coal is the single largest source of greenhouse gas emissions globally and the risks of its continued use in the power sector are not being adequately addressed by regulators and the financial system,” he said.

The report finds that market forces will drive coal power out of existence in deregulated markets, where renewable energy developers will take advantage of the growing price gap. But in several markets, “governments continue to incentivise and underwrite new coal power because market regulations put coal at an unfair economic advantage,” the think tank says. “In some regulated and semi-regulated markets, they also allow the high cost of coal to be passed on to consumers through bills, or they use taxpayers’ money to subsidise coal operators so they can sell power for less than it costs to produce.”

Sundaresan said: “Investors should be wary of relying on continued government support for coal when a phase-out will save their voters billions and make their economies more competitive.”

Carbon Tracker says that governments should deregulate so that renewables can compete with coal on a level playing field; cancel new projects and phase out existing coal fleets; and introduce regulations which allow renewables to deliver maximum value to their energy systems.

It warns: “Failure to take these steps will exacerbate stranded asset risk and could result in overcapacity. This in turn will suppress power prices, create a negative investment signal for renewable energy and ultimately stifle the transition to a low carbon economy.”

You Don’t Need A Big Idea To Start A Company. Four Thought Starters On How To Start Small And Grow

Learning To Work In New Ways Amidst The COVID-19 Pandemic

There’s A Big Problem With The Focus On...

When Your Employer Insists You Go Into Work...