Breaking
How To Get Your Startup Business Off The...
How To Create A COVID Safe Construction Site
How to Make a Good First Impression at...
3 Lucrative Hidden Benefits Of Podcasting
Your Stargazing Guide To Fall: One ‘Halloween Blue...
Mnuchin: White House Still Supports Direct Payments For...
How To Retain Your First Startup Product Users
China Shipments To The U.S. Are 7 Times...
Reviewing ‘The iPhone Of Air Conditioners’
The 8 Best CRO Companies of 2020
AARP BrandVoice: The Doctor Will See You Now,...
ThoughtSpot’s New Cloud-Based Tool Aims At Boosting Growth...
10 Ways Service-Based Businesses Can Generate Positive Word-Of-Mouth...
A Customer-Centric Culture Starts By Embracing This One...
Report: Struggling Black-Owned Businesses Need More Government Grants
Microsoft Races Ahead On RPA (Robotic Process Automation)
Why The Fed’s Outlook Paints A Sobering Picture...
As The End Of 2020 Approaches, The Cybersecurity...
Do Businesses Have A Role In Solving Poverty...
Home Business Cleveland Indians Preparing For Another All-Important Draft
Business 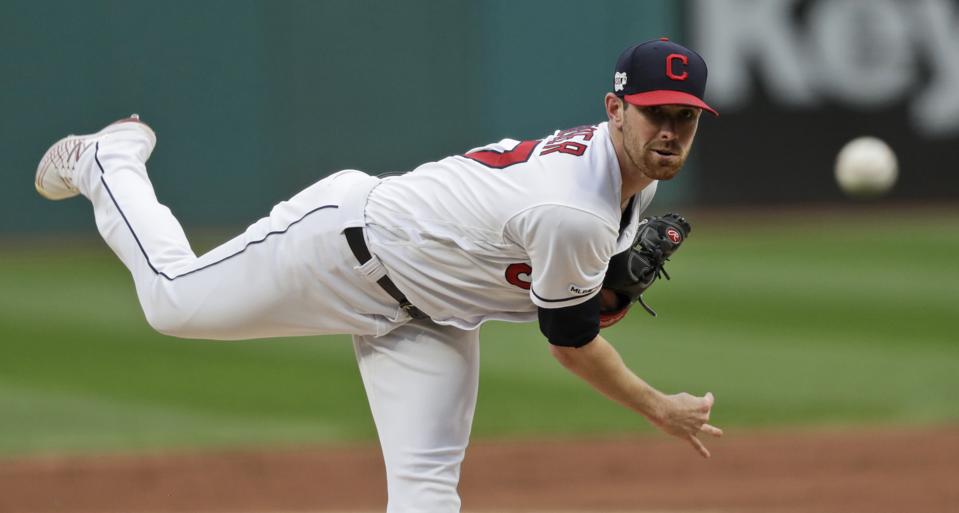 In 2019, three years after the Indians drafted him, pitcher Shane Bieber was the MVP of the All-Star … [+] Game. (AP Photo/Tony Dejak)

Now comes the hard part for a small market, financially conservative, but competitively feisty major league team: trying to win a five-round draft. Or, at least, winning their top picks in the draft.

For the resourceful Cleveland Indians, the June 11 Major League Draft will be another opportunity for the organization to try to out-pick the teams that out-spend them.

It’s an area in which the Indians have excelled in recent years. Last year, for example, when, for portions of its 93-win season, 80% of Cleveland’s starting rotation were drafted players. Three of the four were products of the 2016 draft: Aaron Civale (3rd round), Shane Bieber (4th round), and Zach Plesac (12th round). The other was Adam Plutko, an 11th round pick in 2013, who started three times as many games (20) as the injured Corey Kluber.

The Indians have the 23rd pick in the first round. In certain years that’s been a good place to be. Among the players selected with the 23rd pick in past drafts are Christian Yelich, Jacoby Ellsbury, Mo Vaughn, Jason Kendall, Aaron Sele and Phil Hughes.

The person who will call the name of the first two players the Indians select in the unique 2020 draft will be Director of Amateur Scouting Scott Barnsby. Like all of his peers, Barnsby will be drafting players who haven’t played baseball at all this year, or, if they did, played very little, due to the effects of the coronavirus pandemic.

It’s tough for scouts to scout when there’s nothing to scout, but Barnsby says the Indians will try to make the best of a dicey situation.

“We’ve tried to build a data base as best we can,” Barnsby said on a Zoom call with reporters. “Major League Baseball didn’t allow any video past March 27. So anything taken before that we were able to review, analyze, and evaluate the players from. Major League Baseball has recently lifted that ban. However, any player with new video has to put it through the MLB portal, so every team has access to that. So we’re all on the same playing field as the other teams.”

Drafting good players is hard enough, but in this unprecedented year, where will those drafted players go to play baseball? With a radical reduction expected in minor league baseball, with uncertainty surrounding many minor league teams and all minor league seasons, these are uncharted waters.

After the draft, teams may sign as many amateur players as they like, for a maximum bonus, per player, of $20,000. Even that presents challenges for team officials, with so many question marks surrounding the shape of the sport in 2020.

Asked if the Indians will have the money to compete in the post-draft undrafted talent roundup, Barnsby said, “We’re still working through that. Our expectation is that we’re going to have that opportunity.”

Having the money to compete for the best of the undrafted players is one thing. What to do with those players, once signed, is another.

“Not only does it come down to funds, but rosters and opportunities for the players,” Barnsby said. “The last thing you want to do is sign a player and not have an opportunity for them.”

In almost every way imaginable, the 2020 MLB Draft is a complex puzzle for everyone: the players, the teams, the scouts, the team officials.

But it’s an especially trying time for the elite amateur players taken at the top of the draft, for whom the MLB Draft is traditionally Christmas in June.

“Kids dream of this opportunity,” Barnsby said. “We do feel for the players. It is a special time for them.”