Breaking
Renewables And Energy Storage Are Surging In Red...
Bitcoin’s Richest Are Selling, So Why Is The...
Apple’s iPhone 12 Will Cause Serious Problems For...
Rock Royalties – How A European Startup Is...
4 Differences Between Creative and Marketing Agencies
A Meeting Is A Gathering: The Most Common...
IRS Tax Extension To Jan. 15 For California...
Senate GOP Pushes Through Democratic Filibuster To Advance...
How These Successful Entrepreneurs Learned To Adapt And...
Six Ways Tax Rates Go Up For Retirees
How ‘Mario Kart Live: Home Circuit’ Straddles The...
6 Tools To Bring Your Virtual Conferences To...
COVID-19 And The Future Of Aging: Prospects For...
Harman’s New Citation MutiBeam 700 Is A Feature-Packed...
A Startup Raises $11 Million Using Zoom, A...
Is Your Business Stagnant? It Might Be Time...
Home Business Clippers’ Break Allows Much Needed Practice: ‘We Haven’t Had Consecutive Days Of Practice In A Long Time’
Business

Clippers’ Break Allows Much Needed Practice: ‘We Haven’t Had Consecutive Days Of Practice In A Long Time’ 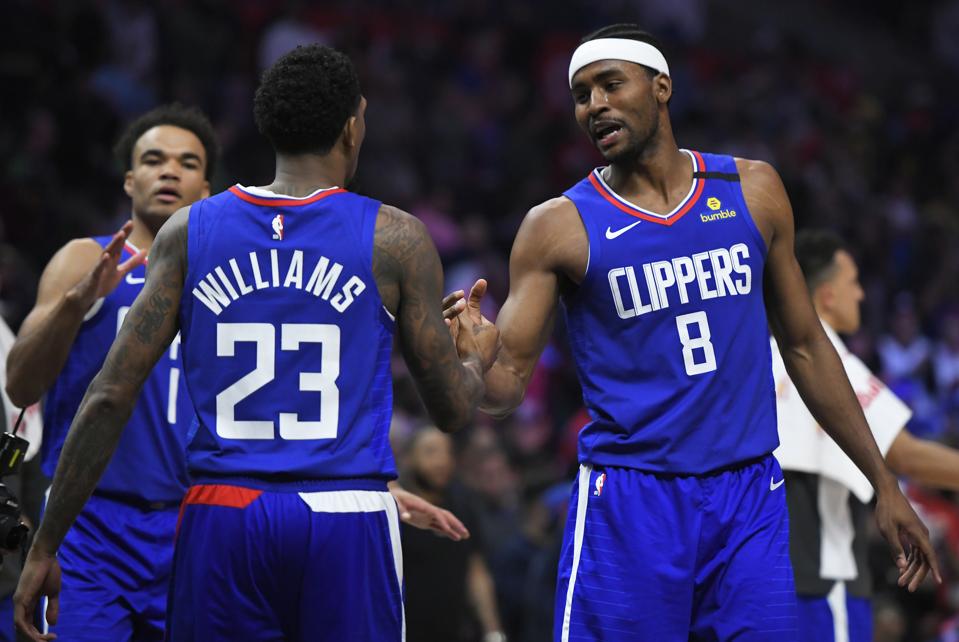 LOS ANGELES, CA – JANUARY 05: Lou Williams #23 and Maurice Harkless #8 of the LA Clippers while … [+] playing the New York Knicks at Staples Center on January 5, 2020 in Los Angeles, California. NOTE TO USER: User expressly acknowledges and agrees that, by downloading and/or using this photograph, user is consenting to the terms and conditions of the Getty Images License Agreement. Lakers won 117 to 107. (Photo by John McCoy/Getty Images)

For the first time all season, the Clippers received a four day break.

The break couldn’t have come at a better time, because the Clippers were clearly worn out.

‘Big time. I feel we became rejuvenated. It was like a mini All-Star break really. It was big because we had a brutal schedule early on.’ – Rodney McGruder

The team has already played 8 back-to-backs in this short season. To put this into perspective, the NBA season has been active for 12 weeks, and the Clippers have had back-to-backs for more than half of that time. ‘Anytime you have 4 days to recover it’s super helpful,’ Landry Shamet said. ‘I’ve benefited just from a couple days off, and then a couple days of practice.’

Comparatively, the Lakers, Rockets, and Nuggets have all played 5 back-to-backs. The Clippers have also played 5 instances of three games in four nights. Simply put, their schedule has been absolutely brutal, and that’s why this four day break was so pivotal. ‘It helped from an energy standpoint, just as far as people’s bodies feeling better,’ Kawhi Leonard said.

Some people may try to argue that that four days off might have been too much of a break, but every single Clipper would disagree with that statement.

‘In the NBA there’s never too much rest, you’ll take whatever you can get.’ – Landry Shamet

Other than the obvious health factors, the most significant part of this break was the ability to practice. The Clippers make a conscious effort to refrain from practicing anytime they have less than a two day break, and they’ve almost never had that opportunity.

Even then, not all practices are created equal. ‘Sometimes you need a practice, and you’ll have one, but you just don’t have enough time to have a good one,’ Doc Rivers said. ‘It’s usually after a game, and so even though you practice, you can’t get a lot out of it.’

The biggest difference between this opportunity to practice, and all of the others? The team had 2 days of rest, and then 2 straight days of practice.

‘We had 2 days off to get rest, and then we could practice. The practices were very spirited, and hard…I don’t know if we could have had practices at a better time than what we just had.’ – Doc Rivers

Although Paul George was unfortunately injured during Wednesday’s practice, every member of the Clippers greatly appreciated the opportunity. ‘Guys were able to get practice, get to know each other on the floor, talk things through, and work on execution,’ Kawhi Leonard said. It was something that the entire team felt like they needed, especially to get the reps in.

‘It was nice to finally get some good practice reps in. That was very pivotal. We really competed and got after one another, it had great carry over into [the game.]’ – Rodney McGruder

The Clippers have 5 remaining back-to-backs left in the season, so their schedule won’t be as rigorous anymore. While health continues to be an issue for the team, energy no longer should be. This team is rejuvenated, and ready to make a push in the standings.

What To Include In A Business Plan For Your App Idea