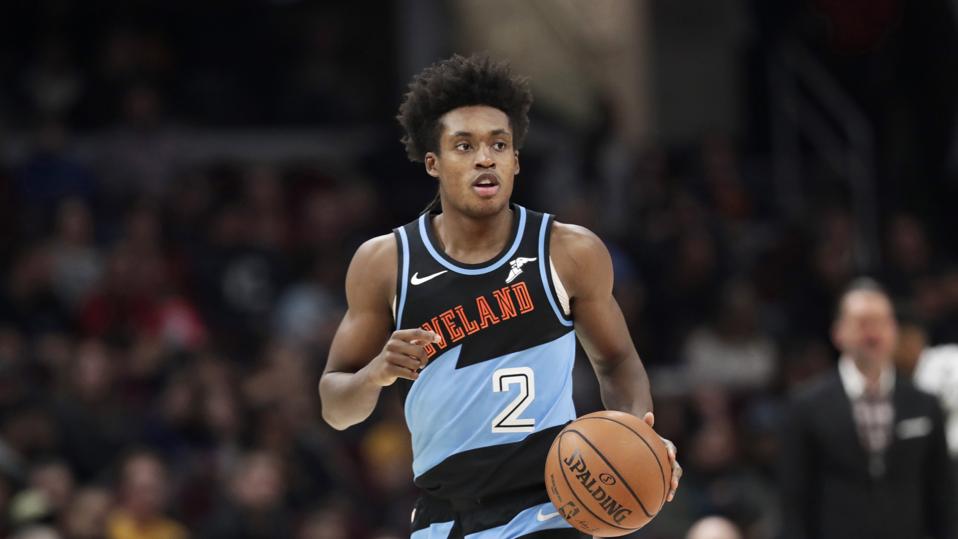 Cleveland Cavaliers’ Collin Sexton drives against the Brooklyn Nets in the second half of an NBA … [+] basketball game, Monday, Nov. 25, 2019, in Cleveland. (AP Photo/Tony Dejak)

Early into his rookie campaign, many, his teammates included, thought Collin Sexton wasn’t ready to play NBA-level basketball. Sexton took too many ill-advised shots, was never looking to make the right play and at times seemed like a lousy consolation prize for the Cavaliers trading away Kyrie Irving. Sexton took a beating from the media,

But, after being snubbed for the annual Rising Stars Game during All-Star weekend, Sexton totally turned his season around. He became an efficient scorer, especially from three-point range, and arguably had a rookie campaign that matched Irving’s, Sexton’s heir apparent. There were still concerns about his playmaking ability, but still room for improvement. Because of the outstanding season, Sexton finish with second team All-Rookie honors

Heading into the summer before sophomore campaign, the sky seemed like it was the limit for Sexton. But, things felt like they shifted after Cleveland selected Darius Garland fifth-overall in the 2019 NBA Draft. The thing is, both Garland and Sexton play the point guard system and it felt like the Cavaliers were already punting on Sexton’s development. Instead, Cleveland was just adding to their franchise cornerstone in Sexton, and build towards their future.

It all happened when Cleveland announced John Beilein would succeed Larry Drew as the franchise’s next head coach. During his time coaching Michigan, Beilein would utilize offensives sets that would utilize two point guards. Conveniently enough for Beilein, he was able use these offensive sets immediately in Cleveland thanks to Sexton and Garland being on the roster.

But, having to share time on the floor with a ball dominant guard would provide an initial challenge for Sexton, but he wasn’t concerned. During the team’s annual media day, the sophomore guard shared that he wouldn’t be changing position and would still be Cleveland’s point guard. Sexton also acknowledged that during his rookie campaign he struggled to set up his teammates and was also a sieve defensively, where he actually ranked as one of the worst in the league last season.

Now, when a player normally says that he looked at the film and was going to correct the glaring mistakes, you usually roll your eyes a bit. But, with Sexton, you knew he was actually serious about correcting his mistakes. Coming out of Alabama, he was known for his tenacity and work ethic. And after completely overhauling his offensive game in the middle of a tumultuous rookie campaign, it was easy to put faith in him masking his flaws.

Eighteen games into his sophomore season, and it appears that Sexton has begun to build upon his potential from last year. Sexton currently leads Cleveland in scoring at 17.9 points per game, with an effective field goal percentage of 47.7% heading into Friday’s contest against the Milwaukee Bucks. While his assist numbers are down to 2.3 per game this season, it isn’t a true indicator of his improved playmaking. In actuality, Sexton is averaging 4.3 potential assists per game, which is rock solid for a point guard who is known for his scoring ability. Defensively, Sexton has improved as well with a defensive rating of 113.9, compared to a rating of 118.1 last season.

But, there are still some lumps for Sexton early into this season as well. After Cleveland’s dominant win over the New York Knicks on November 10, Sexton has only connected on 16.0% of his three-point attempts. But, this doesn’t appear to have caused Sexton’s confidence to waver in any way. After the Cavaliers’ close loss to the Brooklyn Nets, Sexton shared with me that he knew he had to just keep shooting to get out of his recent slump. He went on to share that he forgets about every missed attempt and just focuses on the next possession, which is a mature mentality for a twenty-year-old to have.

Almost a quarter of the way into his sophomore campaign, things are looking bright for Sexton and his future with the Cavaliers. There’s no doubt that the NBA will not make the same mistake by snubbing Sexton for the Rising Stars Game in Chicago this year, since the numbers don’t lie. That, and with the little national media attention Cleveland gets, the rest of the world can be put on notice on how special Sexton truly is.

Black Friday 2019: The Best Home and Wellness Deals Under $50