Breaking
Best Incentive To Get Vaccinated: Money, Messaging, Or...
Page Level Query Analysis at Scale with Google...
How A CIO Can Align IT With Business...
Blogger of the Month: Jo, Girl Eats World
6 Things Women In Business Know That Men...
How to Use First-Party Data for Ad Personalization
Pressing Reset—Putting A Fallen Unicorn Back On Its...
How We Went Viral: Promoting Content with Influencers,...
Blame Olympic Record Price Tag For Return To...
Apple iOS 14.5 Release: Should You Upgrade?
Why Gaming Gear Company Razer Launched A $50...
Technical SEO Implementations to Increase the Impact of...
30 Brilliant Ways to Market Your Eco-Friendly Shopify...
15 Tech Industry Leaders Share Overused (And Misused)...
How to Use Amazon Posts to Promote Your...
U.S. House Passes Bill To Create First Crypto...
Home Business Comedians Are Making New Podcasts While In Covid-19 Quarantine
Business

Comedians Are Making New Podcasts While In Covid-19 Quarantine 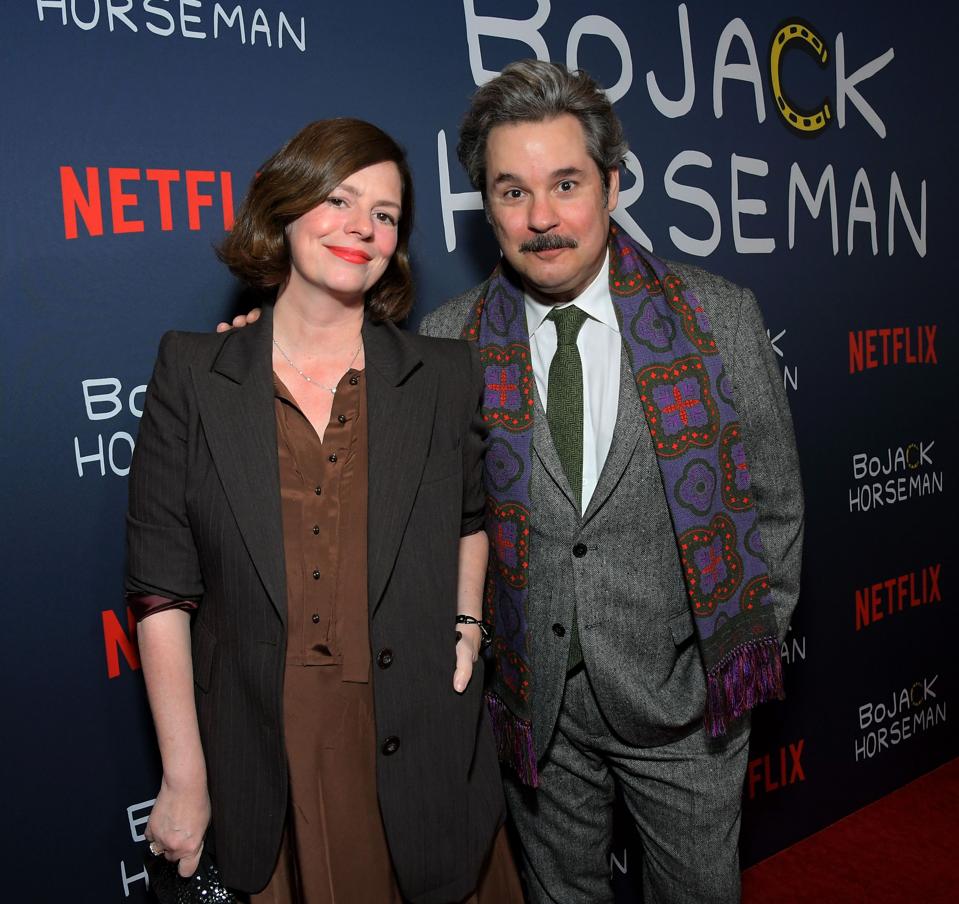 Right now we’re all finding out new ways to operate our lives while barely leaving our house and comedians who are normally filling our lives with joy at comedy clubs and on stage and screen are no different. Some of them are turning to Instagram live to connect with their audience and feel alive while others have made temporary podcasts to talk about their new lives as shut-ins.

What I found from listening to these shows was that these comedy couples really like watching television and that they all want us to stay safe and practice social distancing while maintaining our sanity and they’re here to help us do just that by giving us a glimpse into their inner lives while they recommend television shows, ponder the meaning of their own lives in this situation, and hoping that we all find connection.

Here are some of the best that I’ve seen and now listened to: 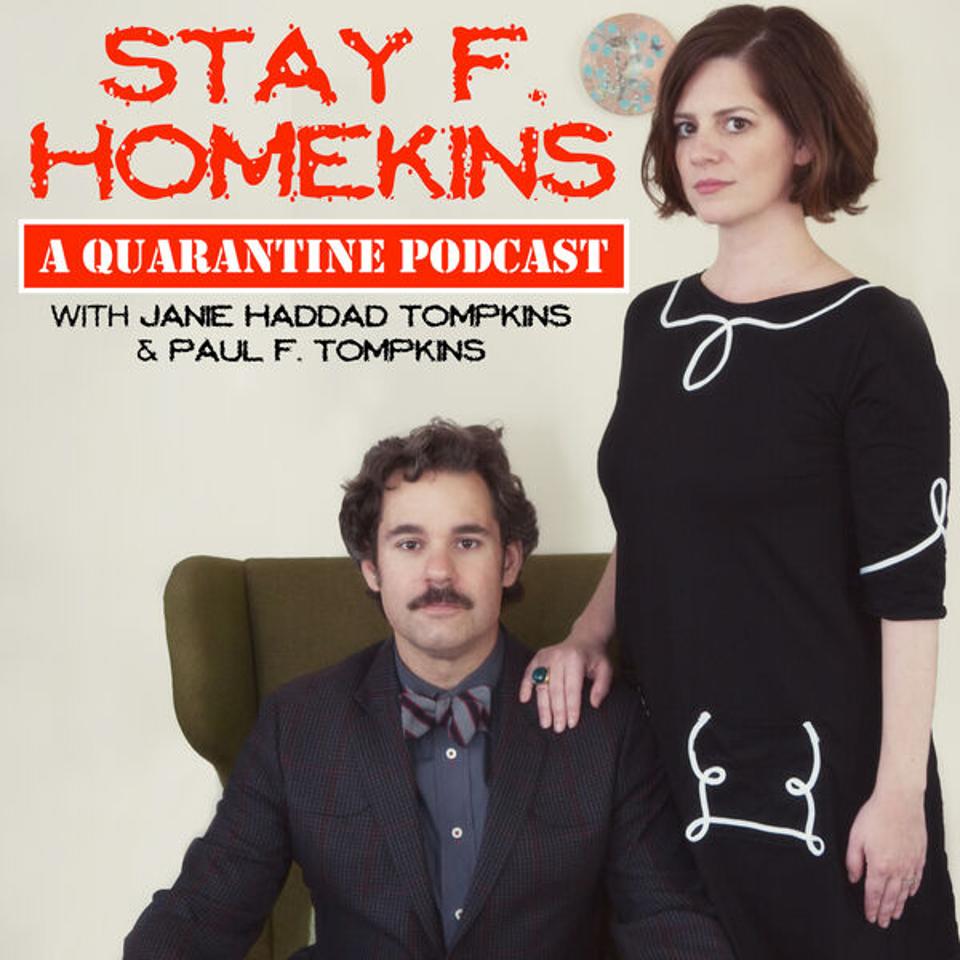 Stay F. Homekins has released two episodes so far and while Paul F. Tompkins and his wife Janie Haddad Tompkins are both very funny, it will come as no surprise that in their conversations Paul is the consummate jokester doing funny voices while Janie plays it more straight talking honestly about things.

Paul F.: “But it would make a great podcast though!”

Together they tell funny family stories, suggest that you should watch Band of Brothers and suggest ideas for new content in a future world where things are being made outside of homes.

She had some suggestions for things she would love personally, like a channel that aired an entire day of programming of one old channel from a particular day in time.

She thought her nostalgia was based on people born in the 70s like her being the first generation obsessed with nostalgia because the older they got the more flooded with information they were starting with just three channels to now with wall-to-wall programming.

Honestly, the podcast is a delightful way to spend time with a very funny duo who are having a great time being together who as she points out are not raising money for charities, not doing ads, but simply wanted to make the podcast to have connection with people.

Fast Company described the show as “slightly elevated banter from what they’re like in real-life,” but I think it’s probably closer to what they would be like at a dinner party.

It is also great to listen to for fans of Bojack Horseman, like myself, because Paul F. Tompkins style of talking is very similar to his character in the show Mr. Peanut Butter, and when he gets excited in conversation, I can’t help but imagine the cartoon dog’s ears standing straight up like when he mock yelled about Fast Company’s description of them. 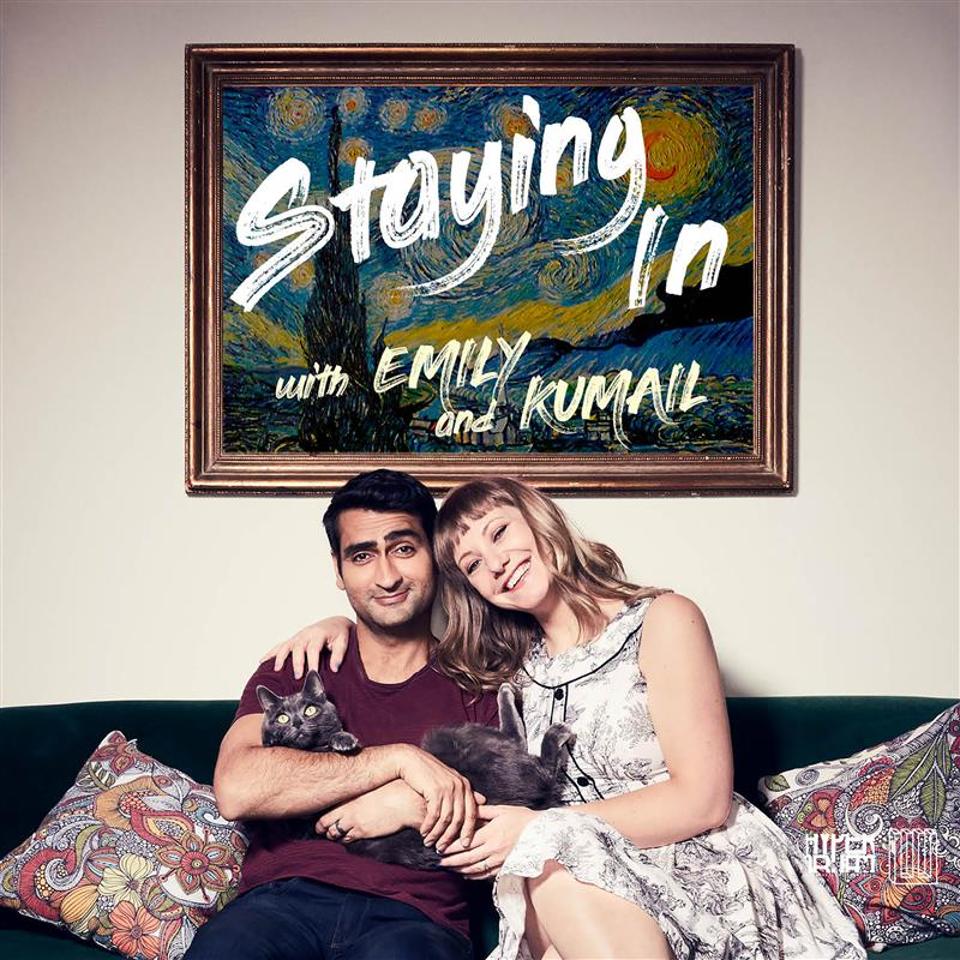 Staying In with Emily and Kumail podcast logo

Unlike Stay F. Homekins, Emily Gordon and Kumail Nanjiani are very upfront that one of the main reasons for their quarantine podcast is to raise money for relief charities of Covid-19. At the time they recorded the first episode they hadn’t chosen charities yet but since then it’s been revealed that all proceeds will be donated to the Center for Disaster Philanthropy, Feeding America, and the Restaurant Workers Community Foundation.

Emily is immune compromised, has gone through surgery, and been diagnosed with Still’s disease, a situation that was the basis for the film that Kumail starred in The Big Sick.

They spend a lot of time in the early going describing their living conditions and their life and how she already had to be careful before the virus. “I barely leave the house anyway,” she says. “You’re like a reverse vampire,” he responds lovingly.

Like the rest of us they’re clearly feeling the weight of what they’re supposed to be doing now and in the first episode called “Fumbling for Normalcy” they describe the timeline of the outside world as before and after the time that Tom Hanks and his wife Rita Wilson were diagnosed with the coronavirus. “Pre-Hanks Wilson,” he says in a recurring funny voice that’s an homage to the 80s cartoon The Jetsons.

Like the Tompkins, Kumail is more the jokester of the two, keeping things light while Emily, who has a background in couples therapy, describes helpful things people can do.

“If you’re having a panic attack list all 50 states,” she says pulling from her experience.

“I would have a panic attack listing all 50 states,” he responds.

They mix in entertainment recommendations with practical advice that runs the gamut of going on walks, to checking in with friends by text, and fun things you can do at home.

“I get excited when I have to pee,” he says. “Ooh now I have something to do.”

By the time they make the second episode they remark that a week ago seems like a million years ago, which I think most of us can relate to right now. But on the bright side, Jeanine points out that it’s the end of FOMO because no one is having parties right now and if they are, you can watch it on Instagram live because it’s in their house. 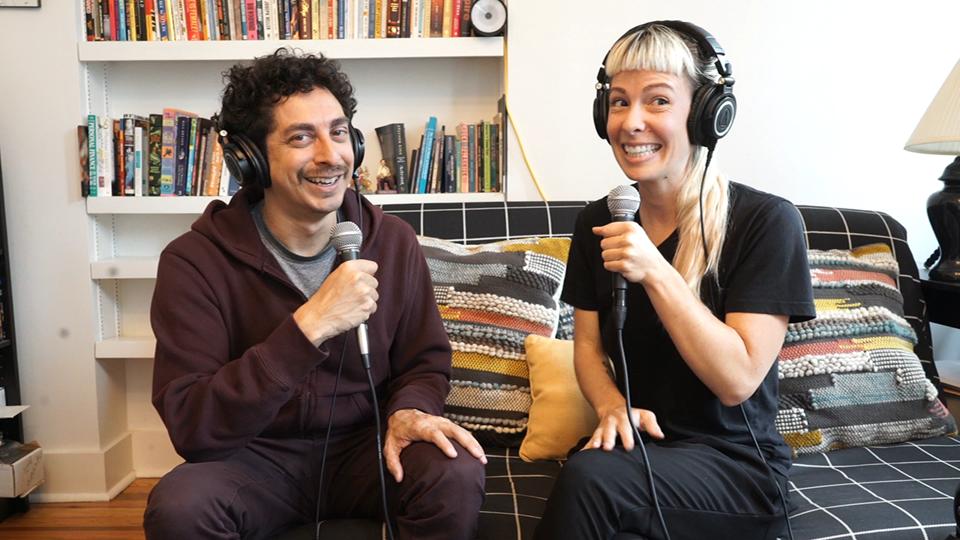 The Next Binge Thing

Our last comedy couple podcast The Next Binge Thing turns out to have a twist. Endlessly upbeat Brooklyn comedians Amber Rollo and Gabe Pacheco were engaged very recently, but due to the quarantine were unable to physically separate their living situations, so they decided to make a podcast out of it.

Despite their breakup, they’re still very friendly to each other and they’re candid in talking about having separate rooms in a railroad style apartment. “He still pees with the door open,” Amber jokes.

They open up about their differences and how it’s funny that before this he loved being in crowds and she was the paranoid one.

They end by discussing Zoom calls with their families, but ultimately there’s not much chit-chat here about their lives or how to stay sane. Mostly they talk about their binge recommendation of the week which makes sense because that’s the title of the show.

This week they binged the HBO docu-series McMillions about the family that scammed McDonalds and people around the globe out of the big prizes from the long running McDonald’s Monopoly game.

The series is so well done that even though it’s a corporation, it brought Rollo back to her childhood and reminded her of the love she had for McDonalds as a child playing the game and the life lessons she learned such as “never order the fish filet with the wierd tartar sauce.”

They go deep into analysis of the show as Pacheco jokes that the ringleader of the scam, Uncle Jerry, reminds him of Dr. Claw from Inspector Gadget and wonders if the FBI investigators had to study Meisner acting technique because they were so convincing.

The verdict is: they really liked the show and Rollo notes that it’s worth a watch “if you like true crime and how the FBI protects McDonalds and the health-care industry.”

What will they binge next week? Will they discuss how wierd it is to be living with your ex and making a show together? You’ll have plenty of time to tune in next week because it’s not like you’re going anywhere.

All shows are available to listen to free wherever you get your podcasts.

Was Chris Sale On A Hall Of Fame Track Before Tommy John Surgery?