Communications Services Sector Earnings: When Staying In Becomes The Trend 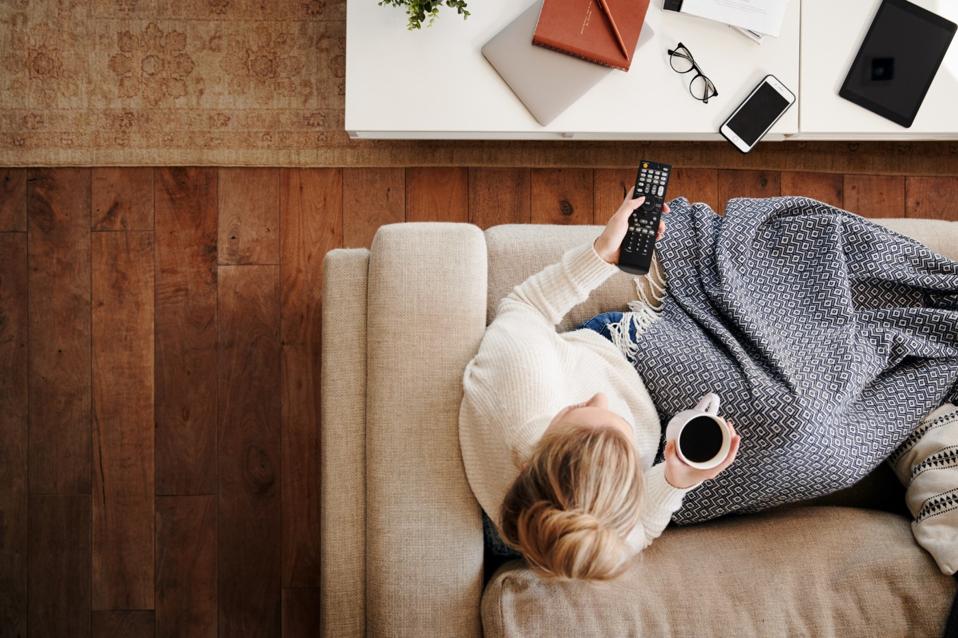 In the topsy-turvy world of coronavirus, the Communication Services sector—a daily lifeline for nearly every American—is the one S&P 500 sector that might come out of the Q1 earnings period looking slightly better than most.

That said, “better” is a relative term these days, considering how rough Q1 was for the market in general. Few expect the sector to escape untouched by the global crisis.

One thing you keep hearing about is how everyone’s home watching Netflix (NFLX). That might be reinforced when earnings come in from NFLX and other companies with home entertainment options. People also are making more calls and typing more texts than ever, according to analysts and companies in the sector, and that’s a potential lift for AT&T (T) and Verizon (VZ) as Q1 results approach.

The home entertainment and phone/texting components of the sector likely could be balanced by poor results from other segments. Movie theaters are closed, advertisers have taken down ads, theme parks are dormant, and sports events have been canceled. All of this could weigh on results for many companies in the sector. Facebook (FB) and Alphabet (GOOGL), for example, depend massively on advertising revenues.

Even if the sector does take some scrapes, any positives could be seen as quite an accomplishment as the nation battles with the scourge of COVID-19 and a growing number of S&P 500 companies pull their earnings guidance. With the economy basically on hold as Americans are mandated to hunker down at home and countless stores and businesses gone dark for the time being, the coming Q1 earnings results might be the among the most jarring in many investors’ lifetimes.

How long it might take to exit the crisis is anyone’s guess at this time. Until then, many analysts are bracing for lackluster results, even from Communication Services components, but remain very interested in any forward guidance—or simply executives’ thoughts.

As an “integral component of the U.S. economy,” according to the government’s critical infrastructure sectors, communications underlies every corner of our personal lives, as well as that of businesses, public safety organizations and government. The internet infrastructure is being put to the utmost test of its capacity—and, so far, seems to be winning.

Our dependence on the internet has rarely been more evident than in the last few weeks of what we may ultimately describe as the Great Disruption caused by the rapidly spreading virus.

As we’ve been sheltered in our homes for weeks at a time, most of us have become heavily reliant on any form of communication we can have with the rest of the world. VZ, T, Apple (AAPL), NFLX, and FB, to name the leaders, have all reported an uptick in traffic and activity that knocked most records off the charts. AAPL is a component of the Information Technology sector, but the rest are in Communication Services, which wasn’t even an official S&P 500 sector until recently.

Walt Disney (DIS) is another huge communications company that may benefit from people being stuck at home, mainly through its Disney+ launch. However, DIS’s profits embrace far more than streaming videos, which aren’t likely to cover what could be substantial hits from the company’s parks, cruises, movies and ESPN sports divisions. But more on that later.

We’re Using Our Phones a Lot

Consider what’s happening at VZ, the $132 billion technology infrastructure giant that’s among the chief communications lifelines through internet and voice connectivity. In an interview with the Harvard Business Review, CEO Hans Vestberg talked about how the network has taxed its robustness while handling above-surge activity every day.

“Right now in the U.S., Verizon customers are making 800 million calls a day,” he said recently. “That’s double the amount of the highest peak during a typical year, which is Mother’s Day.

“Secondly, the duration of the calls is 33% longer,” he added. This might not be terribly surprising to those of us who are texting friends, family and business associates more than ever before, but Vestberg said Americans are sending roughly nine billion—with a B—messages through the VZ network each day.

“That’s the same as New Year’s Eve,” he said for comparison sake. But typically that happens as the clock strikes midnight on a rolling basis throughout the country. With us all homebound, “This is constant,” Vestberg added.

Overall, the Communication Services sector is expected to come out on top among the 11 sectors in the S&P 500, with the highest Q1 earnings growth at 8.5%, according to I/B/E/S data from Refinitiv. That’s thanks in part to four of the 10 sub-industries in the sector. Some of the strong sub-industries include interactive media and services, which is projected to post a 41.4% jump in per-share earnings, and alternative carriers, expected to advance 2.9%. In dollars, that’s roughly translated to $32 billion, up 8.8% compared with the year-ago results, predicts I/B/E/S data from Refinitiv data.

Let’s take a look at how some of these essential companies are expected to perform.

User Data Could Look Nice for VZ, But What Next?

VZ has been very diligent about giving COVID-19 updates to customers, like moving to pick-up only in stores and waiving late fees, but it hasn’t shared any financial metrics. As some analysts have pointed out, the usage measures are jaw-dropping, but they’re all largely revenue-neutral.

It’s the other components of the company that appear more worrisome, especially as the economy moves into a recessionary mode.

How well might data plans sell when people are unemployed? Will consumers want to shell out extra bucks for 5G, which VZ and its competitors are rolling out now? How consumer behavior shifts when we’re on the other side of this is a big question that companies across the board are asking.

Analysts, on average, expect VZ to report revenues of $32.5 billion, above last year’s $32.1 billion, when it’s scheduled to report April 24. Earnings are expected to reach $1.22 a share, 2 cents above the year- ago period.

More Than Phones For T

T has seen much of the same crazy phone usage as VZ, but analysts have been a little tougher on it than VZ. Many are worried that the TNT and TBS stations have seen big drop-offs in viewership because sports coverage is dead. The company’s CNN network is a bright light because people are clamoring for coronavirus-related news, but will it be enough?

And how big of a hit will the rollout of HBO Max be now? “The launch of HBO Max in May should be a catalyst to help drive more gross ad share as well as push wireless and broadband customers to higher plans,” J.P. Morgan’s Philip Cusick wrote in a recent research note.

But, he’s still expressed concern that the “push will be launching into a much slower wireless market, making the product less impactful and taking away a key part of our thesis.”

What’s more, it has a $15 billion revolving line of credit that it doesn’t expect it will need to draw down this year. And, it will keep paying its dividend—an issue that had been bandied about in recent weeks.

Revenues are projected to dip to $44.4 billion from $44.8 billion a year ago when T reports April 22, according to analysts. However, per share profits are expected to hold steady at $0.86.

Can Streaming Help Blunt Impact of Closed Parks for DIS?

DIS’s future is also closely tied to behavioral shifts. People may be hesitant to put themselves in the middle of big crowds after this. A typical day in a DIS park draws huge crowds. Parks, experiences, and the merchandise they generate are DIS’ biggest revenue markets—we’re talking about $26.2 billion in sales in 2019, according to the company’s annual report. According to Trefis data* on the thinkorswim® platform from TD Ameritrade, DIS’ Parks, Experiences, and Products account for 33% of the stock price.

And while Disney+ subscriptions have risen dramatically—50 million subscribers since its launch five months ago, according to data released by the company April 8—new content hasn’t been added and might not be forthcoming any time soon. The same can be said for movies.

Then there are the sports teams. There’s no telling when they’ll get back to playing games. ESPN is taking to airing reruns of major championships while pushing forward the docu-series premiere of Michael Jordan’s Chicago Bulls 1998 championship “The Last Dance.” How long can that last?

When DIS reports May 12, analysts polled by FactSet expect revenues to tumble from earlier expectations at $19.56 billion for the quarter to $18.4 billion. Earnings per share have also fallen, to $1.02 from $1.20 at the end of last year.

NFLX Popular Among Homebound, but there’s More to Story

A pioneer in the streaming business, NFLX has a content bounty that’s deeper and more diverse than ever. Plus, it had already completed most of its programming for the year, what might be considered a competitive advantage.

It’s gotten a lot of notice during this shelter-in-place period with the weirdly popular “Tiger King” documentary series and has a handful still ready to pop out. But, in recent streaming service studies, NFLX’s competition is gaining.

It’s likely that firms offering streaming entertainment picked up some new subscribers over the last quarter, according to research firm CFRA. However, higher programming costs could be a difficult hill to climb. It’s going to be tough for companies like NFLX to develop and produce new programming in this shutdown environment, something that might be more of a negative impact in future quarters.

The crisis also might have hurt NFLX in other ways. For instance, NFLX last month temporarily reduced bandwidth used by its streaming service in Europe. This was at the request of the European Union to ease the load on internet networks in the region. It’s unclear if this might have cost the company any customers, but perhaps we’ll learn more when it reports later this month (see reporting schedule sidebar). 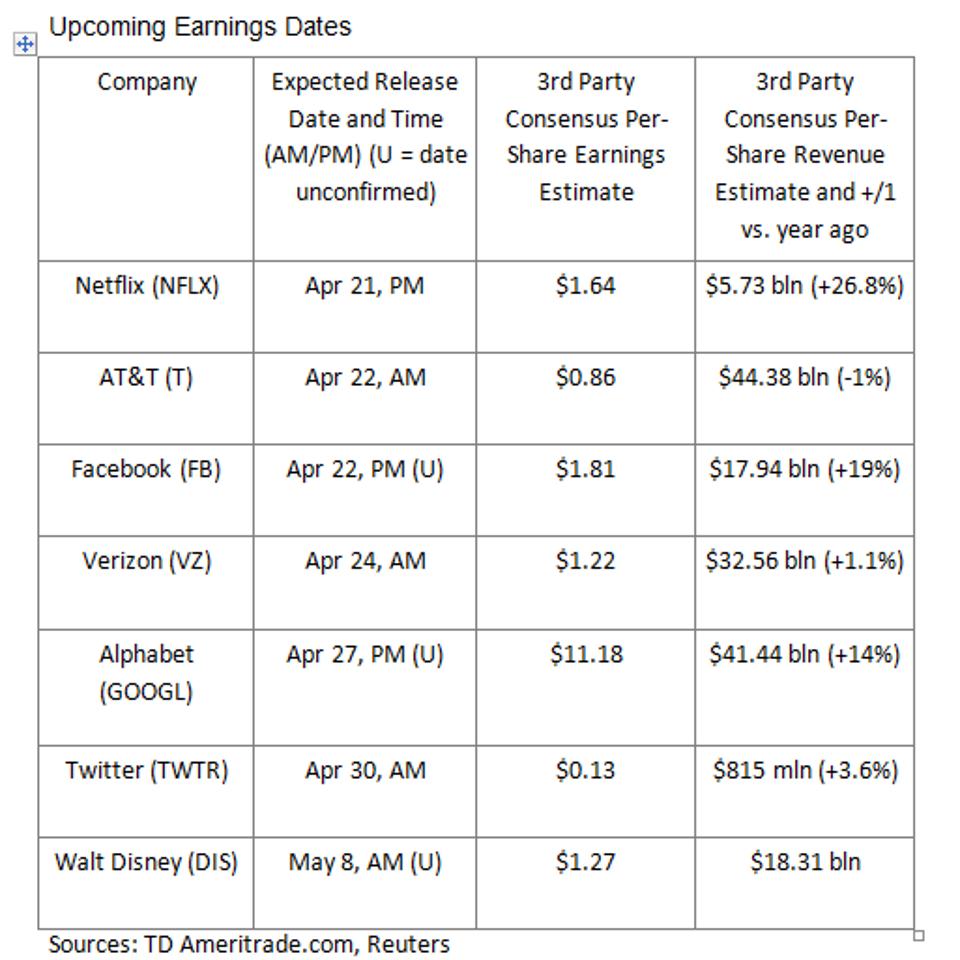 It’s Business As Usual At The NFL, But Three Teams Are Now Dangling In Stadium Limbo

Retirees May Want To Revisit Their Savings Withdrawal...